"We Real Cool" by Gwendolyn Brooks

Gwendolyn Brooks’ poem “We Real Cool” identifies the struggle that Black American youths went through to define themselves in the late fifties and early sixties, in a society that was predominately trying to keep them oppressed. The poem portrays a group of young Black boys who hang out in a pool hall and conduct illegal activity instead of going to school with the rest of their peers. The boys are insecure about their role in society; they talk big so that they can hide behind their facade of being a tough guy or a thug.

Don't use plagiarized sources. Get your custom essay on
“ “We Real Cool” by Gwendolyn Brooks ”
Get custom paper
NEW! smart matching with writer

These boys feel as though they do not have a place in society outside of being a criminal, but instead of fighting the stereotype of the lazy Black man they give in and become what they are expected to become by White, upper-class society. The poem opens with the scene of seven boys at a pool hall named the Golden Shovel. Seven is a number that is typically associated with being lucky.

Proficient in: We Real Cool

The seven pool players can also be seen to represent a small gang, and they need luck on their side, in order to survive their various financial endeavors.

The name of the pool hall, the Golden Shovel, signifies the shortness of the life of a Black youth. The golden part of the title implies that these pool players are young; they should be in school instead of in a pool hall. The shovel is an image that is commonly associated with graves.

Therefore, the significance of the name of the pool hall is that the pool players who hang out there are digging their own graves by conducting illegal business. The pool players have an air of mystery around them that makes them seem cool.

They defy authority, which impresses their more obedient peers; it seems to be a common occurrence among youth that they revere rebellion. In the second stanza, the narrator, who appears to be one of the pool players, says that they are cool because they left school. They are sabotaging themselves by not going to school and living up to their potential; instead of being cool they are only furthering the stereotype of the lazy Black man who is no asset to society. These boys are in fact not cool; the monosyllabic diction of the poem promotes the idea that these boys are uneducated or that they are school dropouts.

The ideas that they gave up on having a formal education

The poem reflects on the ideas that they gave up on having a formal education, possibly because they foresaw no future for themselves in any kind of professional capacity; choosing a life of crime as a way to survive. They feel that it is pointless to be in school if they are not going to be allowed to exist in this world as an equal of their classmates. Brooks continues the poem by listing the illegal activities that these boys partake in. The narrator states that they “lurk late,” and typically illegal activity is conducted in the dark.

The darkness allows people to become whatever they want; the dark distorts images, making someone who appears harmless in the daylight appear menacing in the dark. The boy says that they “strike straight,” which can be interpreted to mean that they commit crimes such as robbery, rape, and murder so that they will not get caught. They “sing sin” implying that they boast of their misdeeds, as if they are some right of passage into manhood. The final activity listed by the narrator is that they “thin gin,” which means to water down the alcohol so that they can make more money, and they probably do this at the pool hall.

These activities are usually done by people from minority backgrounds, because it is the only way for them to survive. Not having an education severely limits ones opportunities to make a better life for themselves so they turn to illegal occupations to support their families. By participating in these kinds of illegal behavior they are giving up on their race, in the way that they are allowing themselves to be characterized negatively. In the last stanza of the poem sums up the life of uneducated Black people who get caught up in the world of crime.

The narrator states that they “Jazz June;” Jazz is a very rebellious kind of music, because it is based on not conforming to what is traditionally thought of as music. June is the beginning of summer; it connotes a feeling of freedom from the everyday drudgeries of life. It is a chance for exploration and discovery. June is prime tourist season, so they could be saying that they have a whole new crop of people to swindle in June, thanks to vacationers who do not know any better. In the last line of the poem the narrator admits that their life style leads to an early death, but he does not seem to care.

They have existential freedom, which is characterized by not knowing or caring what is right or wrong; they will have to ultimately assume the responsibility of their actions and in this case the end result is death. The life of these boys may be clouded with excitement and danger, but the lives they are leading are not sustainable; they are extremely likely to die as a result of the path they chose to take. This poem is reminiscent of the poetry of Langston Hughes, in the way that it is written to be read like a song or a testimony.

She uses short phrases that are more likely to stick in the reader’s head. By starting a line with the words “lurk,” “strike,” and “die” instead of “we” she is putting emphasis on the actions of the boys and the consequence of those actions. She uses Black diction to make the poem seem more authentic to the reader; it also shows their lack of education. Each of the couplets in the poem rhyme: “cool” and “school,” “late” and “straight,” “sin” and “gin,” and “June” and “soon. ” This increases the poems melodic tone.

It sounds very catchy when one reads it; when someone reads a poem that rhymes they are more likely to remember that poem. The “we” at the end of every line provokes a sense of togetherness until the end when they die. Their way of life will certainly end in death. All they will ever be known as are the pool players at the Golden Shovel. The initial simplicity of the poem serves to invite the reader to analyze the text, searching for the deeper meaning. Gwendolyn Brooks is commenting on the futility that Black Americans felt at this time.

As a whole, society thought of Black people as intellectually inferior and a waste of space. There is a sense of hopelessness in this poem; these boys are searching for a place to belong, in a society that does not seem to want them. Kids naturally feel a need to rebel against authority, but these boys have taken that to the extreme. These boys are content with the fact they will not live a long life, and they seem proud of it. By these boys giving up on any potential future that they may have had, they are only proving those who doubted them that they were correct in thinking them inferior.

"We Real Cool" by Gwendolyn Brooks. (2020, Jun 02). Retrieved from https://studymoose.com/we-real-cool-by-gwendolyn-brooks-2-essay 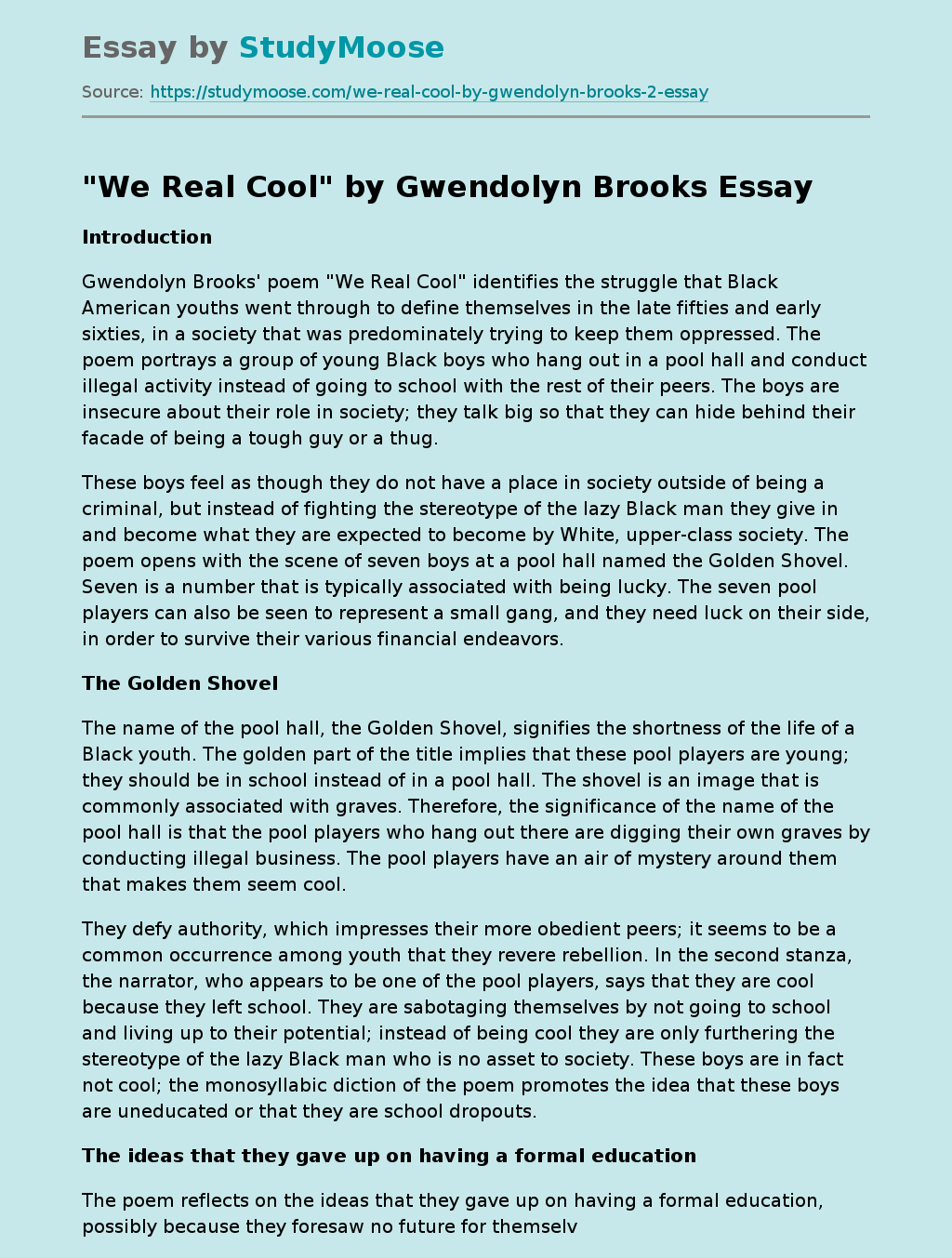