In life people constantly experience changes. Whether the change is bad, good, expected or unexpected, it always occurs. Similarly, people also go through transitions. However, unlike change, which is a shift in what a person is used to, a transition is a turning point that often causes a major reshaping in a person’s life (Transitions Class Notes, 2010). There are five types of transitions that a person can experience. The transitions include developmental, health illness, organizational, situational, and multiple (Situational Transitions Class Notes, 2012).

Don't use plagiarized sources. Get your custom essay on
“ Situational Transitions ”
Get custom paper
NEW! smart matching with writer

A situational transition in particular is when a person experiences a reshaping in their lifestyle (Hampton, 2010). That being said, immigration is considered to be a situational transition. Today in western cultures, immigration is commonly seen. Although many of us may not realize, immigrating is difficult for an immigrant to endure because it is a complete shift from the life they are used to. However, immigrating can be particularly overwhelming for youth.

In the following paper, “A Cultural-Ecological Model of Migration and Development: Focusing on Latino Immigrant Youth” (Perreira, and Smith, 2007), “Understanding and Responding to the Needs of Newcomer Immigrant Youth and Families” (Gaytan, M.

S.W, E.M, Carhill, M.A, Suarez-Orozco, 2007), and “Immigrant Youth in U.S. Schools: Opportunities for Prevention” (Birman, Weinstein, M.A., Chan, and Beehler, 2007), will be compared and contrasted. Two common themes amongst the three articles will then be identified and then discussed in relation to how they relate to powerlessness and despair. Finally, a current community resource will be identified which is available for immigrant youth today that can help address the common themes that are identified within the three articles.

In the three articles mentioned above, it is evident that they all suggest that there is a lack of community resources available to help immigrant youth adjust to their new culture and surroundings. Perreira et al. (2007) states that in many communities which immigrant families settle, many of the language classes offered are full and have waitlists for those wanting to attend. Similarly, Gaytan et al. (2007) reveals that a substantial amount of immigrant youth and children are without access to any type of supportive resource such as after-school programs or community organizations that would be appropriate to support them in adjusting to their new lives and culture. Furthermore, Birman et al. (2007) suggests that schools are often perceived to have inadequate resources available for the needs of new immigrant youth.

Another common theme that arises within the three articles is the fact that immigrant youth encounter difficulties adapting to migration due to family conflicts. These family struggles arise particularly regarding immigrant youth being caught between wanting to adapt to their new cultures behaviors and norms, and acting the way that their parents want them to as if they would in their country of origin. Perreira et al. (2007) states that because rates of acculturation differ for immigrant youth and their parents, it can cause an exacerbation of the parent-child conflict. In addition, Gaytan et al. (2007) implies that as more time was spent in the new country, parents of immigrant youth had concerns about the growing distance between them and their children. Furthermore, Birman et al. (2007) mentions that because immigrant children are more inclined to adapt quicker into the new culture it can cause family conflict to arise.

Evidently, migrating to a new country can be challenging for immigrant youth. Having a lack of resources available to meet their needs and family conflict surrounding cultural preferences, can lead to the youth to have feelings of powerlessness and despair. Powerlessness is the “perception that one lacks the capacity or authority to affect an outcome” (Situational Transitions Class Notes, 2012). Without the proper resources available to immigrant youth in their new culture and surroundings, they can feel as if there is nothing they can do to assist them to progress in their new life.

Also, because of family conflict, youth may feel as if they cannot talk to their parents about their difficulties and therefore have nobody to support them through this challenging time. This can cause them to feel defeated and believe themselves to be inadequate in their capabilities. As a result, feelings of guilt and shame can arise, which in turn can cause them to have a consistent negative outlook and continuously cause them to believe that they will fail. It is important to recognize the impact of feeling of powerlessness as it can significantly affect the ability of the newcomer youth to transition successfully (Situational Transitions Class Notes, 2012) into their new culture.

As stated previously, powerlessness and despair can arise from a lack of resources for immigrant youth to rely on, and also due to family conflict surrounding cultural preferences. Despair “occurs when relief is not imminent by the evaluation of the individual” (Situational Transitions Class Notes, 2012). Not having adequate resources available for these immigrant youth can make them feel defeated because they have no extra support to help them achieve their goals, such as learning English proficiently. This can cause them to lose site of their goal and therefore the path to reaching the goal is lost (Situational Transitions Class Notes, 2012).

Again, in relation to despair, the immigrant youth can perceive unachieved outcomes as personal failures which causes self-doubt and forces them to give up (Situational Transitions Class Notes, 2012) on their dreams. In addition, because it is primarily the parent’s responsibility to teach and provide guidance to their children, when conflict arises between the two, youth may feel as if they have to face their challenges alone. This can directly affect the child in a negative way such as impairing their concentration, therefore affecting their ability to learn, cause fluctuating moods, and possibly lead to symptoms of depression and suicide (Situational Transitions Class Notes, 2012).

Evidently, many communities which consist of immigrant youth lack resources for them to rely on, in order to help them transition successfully into their new culture and surroundings. Also, as previously mentioned, arising family conflict can further impede this aspect for immigrant youth. That being said, in Abbotsford there is an existing community service called the Abbotsford Community Services that offers programs designed specifically for immigrant youth, which addresses these two situations.

Palwinder Kelaya (personal communication, October 3, 2012) states that the Abbotsford Community Services programs philosophies are to assemble strength and build bridges to the future. Also articulated by Kelaya (October 3, 2012), the program goals are to help those who are vulnerable and provide them with the support they require. In addition she stresses that the program acts to promote inclusion of all people in the agency and community in order to help them be successful in their future. The program uses many different allied care professionals throughout their programs such as school and family counselors, psychologists, Abbotsford Mental Health, teachers, and many more, to help meet the program goals (Kelaya, October 3, 2012).

One of the programs offered is one that is available specifically for immigrant youth, which is called the Immigrant Youth Young Adult Program. Palwinder Kelaya (personal communication, October 10, 2012) describes the program as being designed for those youth who are feeling powerless due to the struggles that they have learning English or fitting into the community and new culture. Palwinder Kelalya (October 10, 2012) also states that they are able to empower these youth by coaching, mentoring, and guiding them with the services they need such as literacy, ESL, computer, and life skills. These programs are extremely effective because they help youth realize their potential as they receive the skills, which are necessary to be successful in their new culture and gain the knowledge in order to lead a good quality of life.

In addition to the programs designed specifically for immigrant youth, the Abbotsford Community Resource Services also have programs designed particularly for immigrant families. One program offered exclusively for families is the family outreach program, which Palwinder Kelaya (October 10, 2012) describes as being designed to assist those families experiencing conflicts or who are having difficulties with parent-child relationships. The program works together with the family to help them overcome their differences. Palwinder Kelaya (October 3, 2012) indicates that this is accomplished by incorporating Supportive family interventions, planning and referral services for families, and by providing family counseling in the family homes.

These interventions can help decrease the feelings of powerlessness and despair for immigrant youth because it allows them to speak freely and express how their feelings to their parents, which may have been difficult for them to do on their own. In turn, the parents are also able to express their feelings and concerns. By allowing discussions to take place with a professional mediator, the conversations can flow freely and both sides can be heard. This can help alleviate conflict between the parents and child, as they are able to understand each other’s opinions and be assisted to come up with ideas and solutions that both sides can come to an agreement upon.

In summary, immigrant youth have many challenges when adapting to a new culture and surroundings. The lack of resources and family conflict can add to this already stressful situation, which in turn can cause them to have feelings of powerlessness and despair. As a result of these feelings, the youth are at a higher risk of not transitioning successfully into their new life. It is a community’s responsibility to provide avenues of support to enable immigrant youth to adjust smoothly and effectively into their new culture. “By doing so we can facilitate the transition of immigrant families and better promote the health and well-being of their children” (Perreira et al, 2007, p.9). 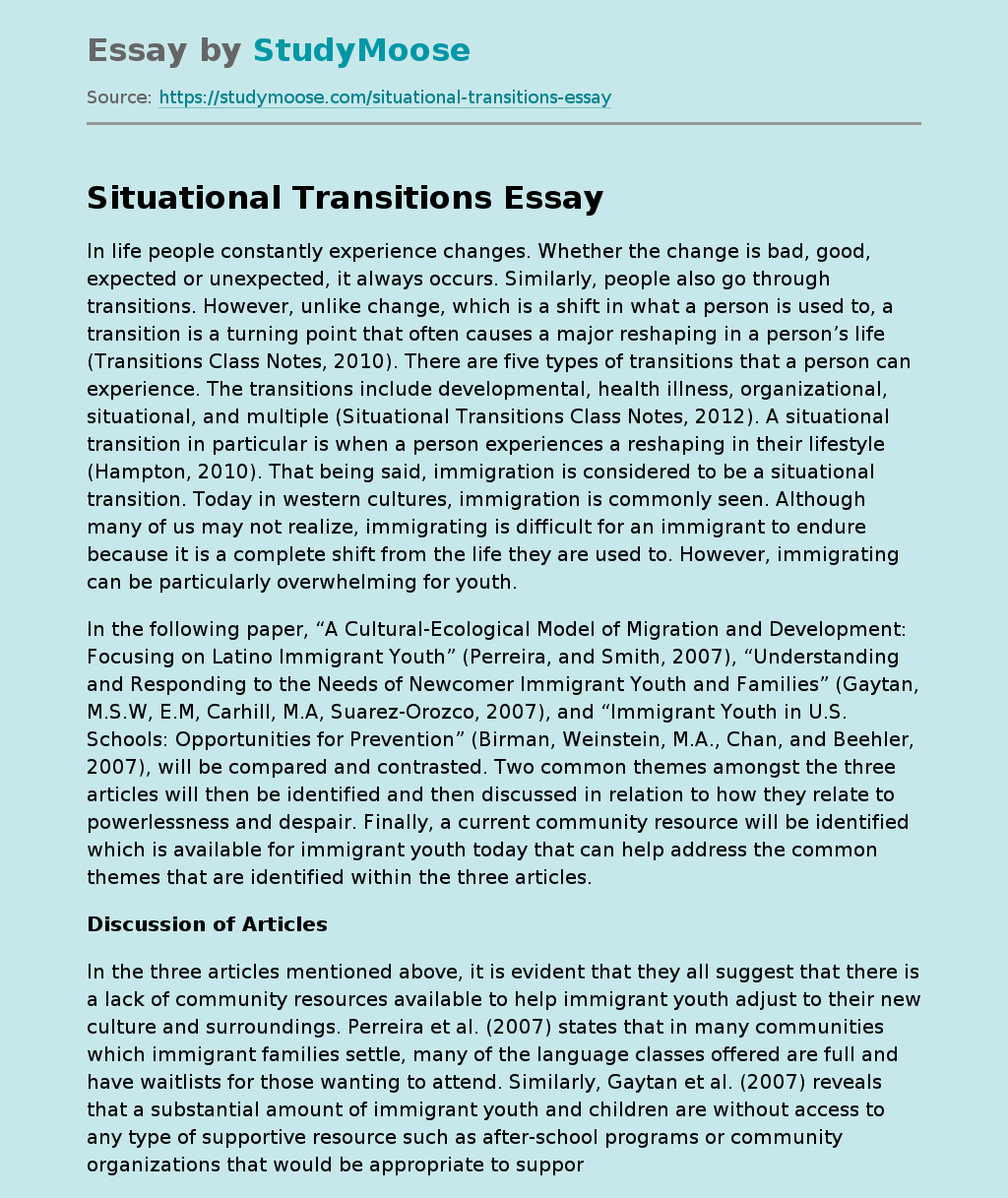