I did my interview with a relative who we’ll just call “Sarah” for the remainder of this paper for confidential reasons. Sarah has been struggling with her addiction since the age of 28. She started experimenting with drugs in her late teens. First it was marijuana, all of her friends and even family members were smoking the drug. By the time she reached her earl y 20’s Sarah started experimenting with cocaine which eventually lead to her addiction to crack cocaine.

Don't use plagiarized sources.
Get Your Custom Essay on Interview Reflection Paper Just from $13,9/Page

By the time Sarah was addicted to crack cocaine she was already married and a mother of 4, one boy and three girls. Her son was 8 years old and the girls were ages 6, 5, and 3 years old. Her husband was not nor ever was a drug user. He loved her and their children dearly and was trying anything and everything to get Sarah the help that she needed, but at the time Sarah had no interest in receiving any kind of help even after she found out she was pregnant again.

Sarah didn’t believe she had a problem at the time, however she admitted using the drug multiple times during her pregnancy. Sarah delivered her baby boy in January of 1993.

Sarah stated that she tried quitting the drug during her pregnancy and also after she had her baby but struggled, meanwhile her husband was also struggling trying to work and take care of 5 children now. Sarah also stated that on a number of occasions she wouldn’t come home because she was at the “crack house” with her friends. It got to the point where her husband wouldn’t give her any more money because he knew what she was going to do with it. When Sarah’s funds were cut off she started stealing to support her habit. Sarah admitted to steeling from grocery stores, department stores and even family members including her own husband, she also admitted to prostituting herself for money and/or drugs. This resulted to her being arrested multiple times between 1994 and 1997. In this time frame she also had 2 more children, both boys one born in 1995 and the other 1997. This is when she realized that she had hit rock bottom, she was facing jail time for her crimes, had 7 children that she did not spend time with and a husband who has just about gave up on her. Sarah was on the verge of losing everything she had left.

On October 16th 1997 she was incarcerated for past crimes she had committed, she was sentenced to 1 year in jail and 2 years of probation. During Sarah’s incarceration she went through her detox phase, during the detox phase she was experiencing cravings, anxiety, irritability, insomnia and depression, she even had thoughts of suicide throughout this process. This process lasted for several months. Sarah stated that this was the hardest part of her incarceration. Looking back Sarah is thankful for having to serve the time because that helped her through her first steps of becoming sober. Part of her probation was her being required to meet with case worker and also having to take random drug test through a program called ZCI for 2 years. As of October 16th 1997 Sarah has remained sober. She now looks back and thinks about everything she put her family through and feels horrible. “Don’t get me wrong, it is an everyday struggle.

I’ve thought about using several times throughout my sobriety, but that’s part of the struggle. I then look back at all the hurt and pain I caused everyone including myself and that’s what keeps me sober”. During this interview Sarah was very emotional, and remorseful. We took 4 breaks within an hour timeframe for her to compose herself. At first I was a little bit sketchy on doing this interview but at the end of the day I am thankful for having to do it because I got on a more personal level with Sarah. Even though I’ve known her all my life I feel like this brought us a little closer, and now she knows that she has someone else to come to if she ever finds herself struggling with her sobriety or any other trials she may be facing. If I was Sarah’s worker I would put her through detoxification process, followed by cognitive behavioral therapy as well as some type of motivational therapy. I would also recommend her to find some type of support system to help her live a drug free productive life. 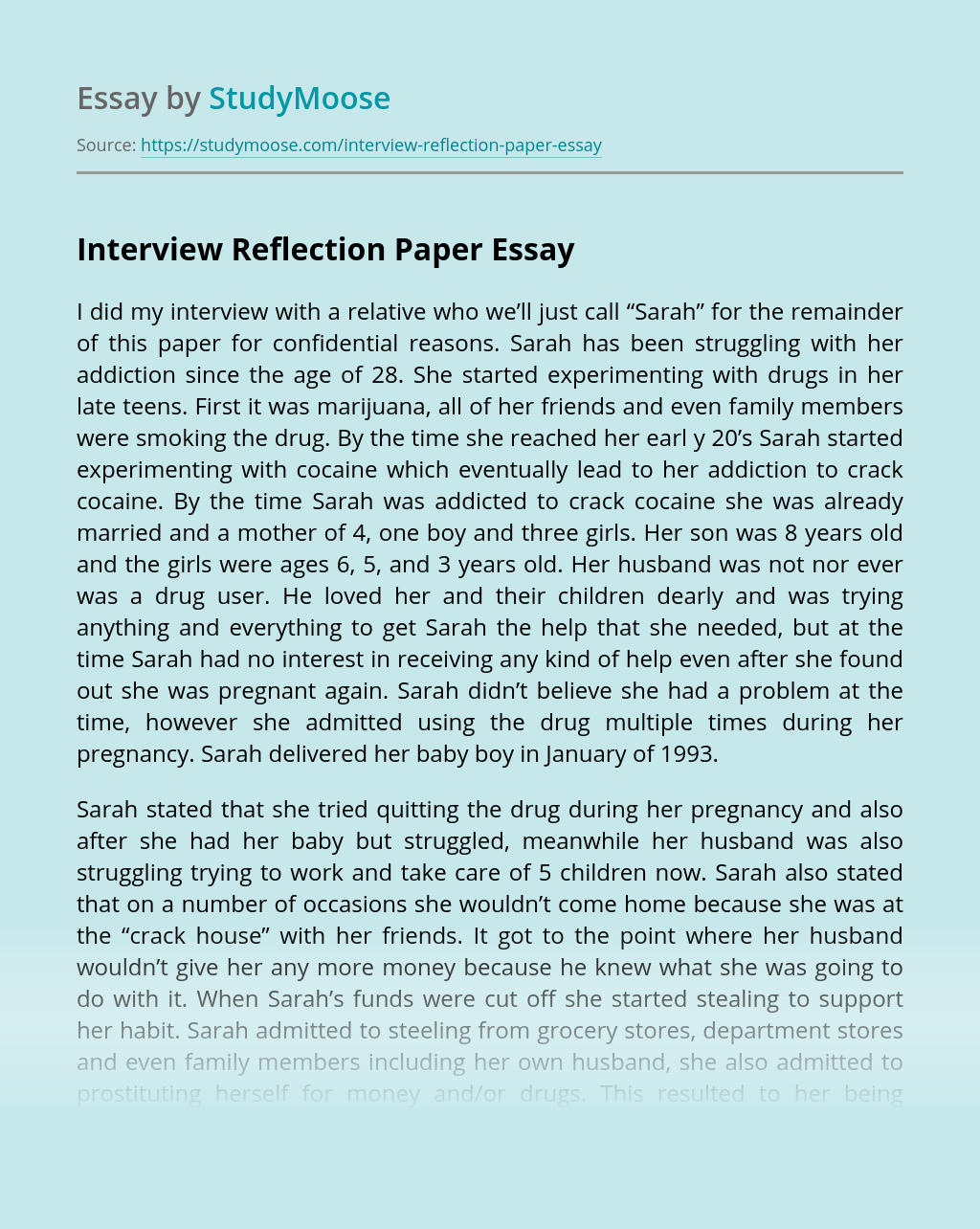 Nowadays video game addiction has become one of the most popular problems especially among small children and teenagers. This addiction strongly affects ones health, in particular, eyesight, ones back and spine. Addiction makes one to be quite aggressive, it is hard to concentrate and one does not even have time to eat or sleep, because...

It is becoming increasingly difficult to ignore the problem of addiction, which affects many individuals, families and communities everyday. This essay is going to look at the prevalence of addiction in Scotland and what the Scottish Government are proposing to do to reduce the damage caused by addiction. There are many other stakeholders in the...

View sample
Get Essay
My one Point Presentation

What are the three strongest reasons to support your point of view? 1. Media Habits – Aggressive Attitudes and Behaviors 2. Impact on media violence on kids and young adults on the rise 3. Children and adults alike have become additive I. Introduction Video games have been in existed since the 1970’s, but it was...

View sample
The Pros and Cons of Employee Drug Testing

Drug abuse in the workspace is a popular, global problem if we believe in an American research study done by William F. Current. He quotes, that 75% of all drug addicts who are older then 18 years work within an organization. Again, 75 % of them consume drugs at work. He assumes, that if you...

Chapter 1 THE PROBLEM AND ITS BACKGROUND Rationale Modernization of living has a great impact to one of us, specifically in the field of technology that introduces us to this, computer age because of its many benefits that makes our lives better and helps us do work a lot better. One evidence is the excessive...