A clean well lighted place by Ernest Hemingway has a few themes that stand out clearly but the one theme that stands out to me is despair. According to Merriam-Webster dictionary, despair means to lose all hope or confidence. In the story, the older waiter and the old deaf man somehow share a common bond of despair. Both men are of age and like to be out, late at night, alone. Asides from the story alone, the theme of the story can be brought out by the setting.

Don't use plagiarized sources. Get your custom essay on
“ A Clean Well Lighted Place – Theme and Setting ”
Get custom paper
NEW! smart matching with writer

The setting contributes to the story’s theme in different ways.

”(107) sets a mood of a person in sadness. As a regular, at a cafe, late at night alone reveals the character’s personality with the help of the setting.

The setting reveals the story’s mood because it visualizes the scene along with emotions of the story. Obviously the old man is not the type of drunk to get violent or rough because the mood seems to be calming as the setting had described “but at night the dew settled the dust and the old man liked to sit late because he was deaf and now at night it was quiet and he felt the difference.

”(107) Even though the old man is deaf, the setting intensified the mood of peacefulness that the old man enjoys nice quiet drinks at a clean place.

Later in the story the older waiter had no place to go for a drink so, he had gone to a bar/bodega for a drink; however, the mood of the bar/bodega compared to the cafe was not as peaceful nor comfortable. The waiter mentioned “It was the light of course but it is necessary that the place be clean and pleasant. You do not want music. Certainly you do not want music. Nor can you stand before a bar with dignity although that is all that is provided for these hours. ”(109) The mood clearly shows a difference within a different setting.

If the old man were to drink in that bar then the story’s mood could have been perceived in a different way. Furthermore, the setting contributes to the structure of the story, like cartilages in a human body. The cafe can be viewed as a workplace and also as a place of peaceful socialization. Each person deals with despair differently. Having the setting at a cafe where it was mentioned that it was quiet help structure the story that it is neither a depressing story nor, a happy story. The two waiters who were gossiping about the old man mentioned that he had committed suicide but, he was saved.

Being in a cafe is different than rather being in a bar or anywhere else. The cafe signifies a place for space or time, depending on the person. The old man is not trying to cure his despair but rather subdue it. The setting could have taken place anywhere but it also could have affected the structure of the story differently. For example, when the older waiter was out trying to kill time due to insomnia, he went to a bar but, it was not soothing; therefore, he went home. This proves how the setting was able to support its main structure of having a cafe rather than a different place.

Finally, the lesson of the story is that do not be impatient. The setting contributed to how the lesson of the story was delivered. The old deaf man was not harming anyone and the cafe was not to close ‘til two-thirty in the morning but, the young waiter wanted to close early because he wanted to go home to his wife. The setting is pleasing and comfortable for those who need a place late at night yet, it was taken away from someone who needed it. Even though the old man left quietly, it was obvious he was not done drinking.

If the setting were to be elsewhere like a bar, it would mean that the old man was looking for a good time but, that was not the case. The setting contributed to the lesson like a book to a lecture. Overall, the setting contributes to the theme. The cafe represents salvation, its cleanliness and good lighting suggest peace and relaxation, whereas a bar is chaotic and loud. The older waiter describes it as a refuge from the despair felt by those who are aware of the nothingness. In a clean well-lighted cafe, despair can be managed and even temporarily forgotten.

When the older waiter describes the nothingness that is life, he says, “It was only that and light was all it needed and a certain cleanness and order. ”(109) The “it” in the sentence was not defined, but we can speculate about the waiter’s meaning: although life and man are nothing, light, cleanliness, and order can serve as substance. They can help counter off the despair from anyone. As long as a clean, well-lighted cafe exists, despair can be kept in check. This shows how the setting contributes to the theme through the mood, the structure, and the lesson of the story shaped by the setting. 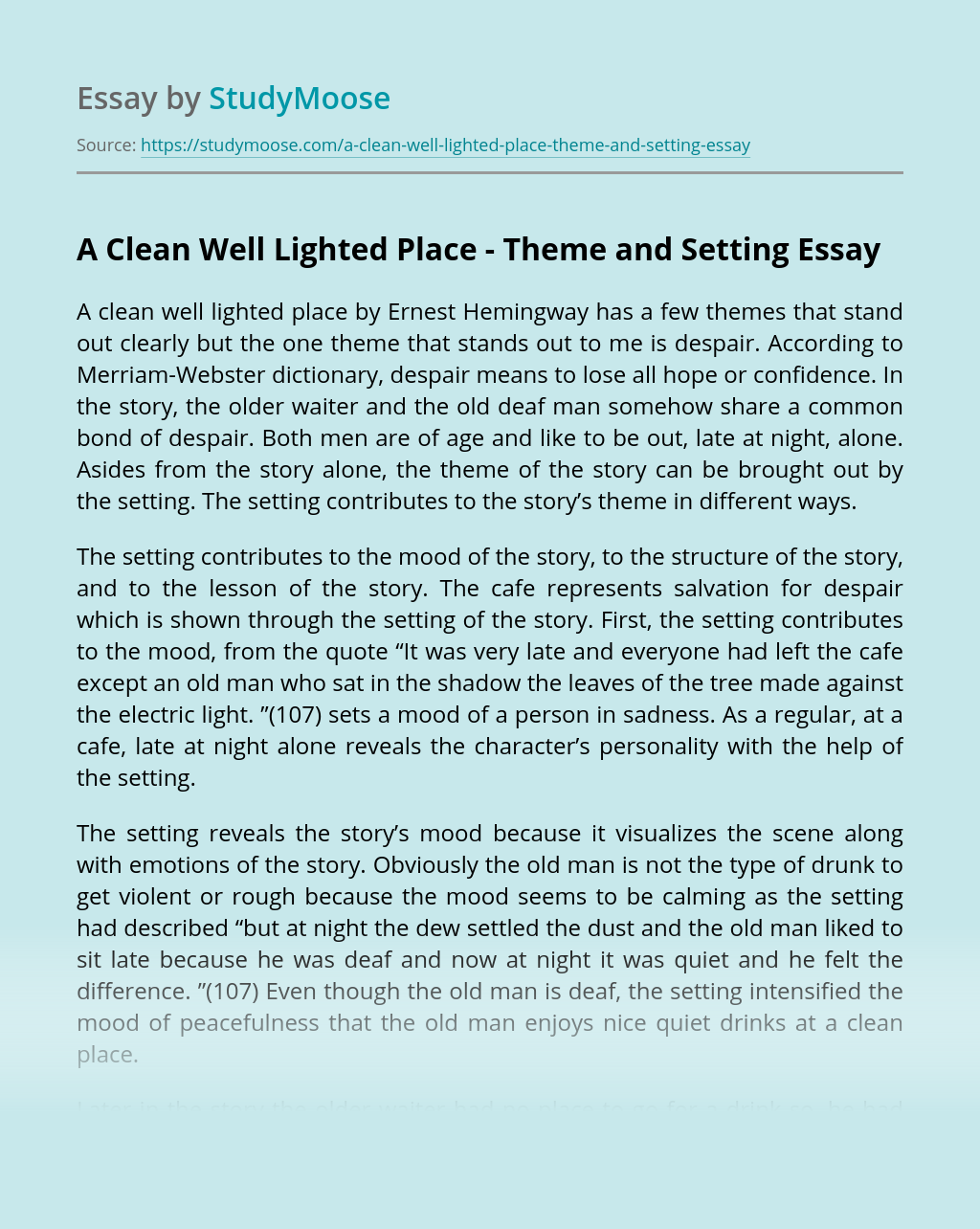