A Clean, Well-lighted Place and Hills like White Elephants

The two stories of Ernest Hemingway happened in a well kept café and an old bar where people spend time to unwind. Looking on both stories, it is tempting to create that the coffee shop could have been the old bar before and the old man may have been frequenting that place when he was younger.  Though it is impossible to even think that it is just but one place because it is of different story, the morale of both plays represent man’s search for happiness.

Don't use plagiarized sources. Get your custom essay on
“ A Clean, Well-lighted Place and Hills like White Elephants ”
Get custom paper
NEW! smart matching with writer

Both short stories are written while the main characters are drinking however, the irony is between the two sets of characters.  In the hills the two main characters were arguing about abortion and in the well lighted place it is the two waiters exchanging their views about the lone customer who could have committed suicide a week ago.

The plot differs but it represents the same theme about life viewed from different perspective but still ends with man constantly finding the meaning of it.

Consequently, Hemmingway validates the element of time by his most repeated lines “five minutes” which is very much related to measuring an event that is taking place.  The author’s powerful use of time makes the narrative more real and to the reader, an event that can really happen in reality.

The two stories are parallel with each other upon reading them at the same time.  The men of the stories are lonely creatures because they seemed not to succeed in finding happiness in a life that is void of meaning which will be discussed in details below.

The Men in the Clean, Well-Lighted Place

They were the old man, the older waiter, and the younger waiter who have a wife waiting in his home.  The two men are not in hurry because there is no reason for them to do so.  The old man in his deafness wished to calm his existence by the shadow of the leaves cast from the tree by an electrical post; it provides solace to hide his existence brought by the brightness of the place.  Clean must be the metaphor of order, which means that an uncommitted life is less hazardous, simple and nothing as the author narrates which means useless and for that reason, the old man is in despair despite of his money.

The deaf man is not happy because he does not have children and he was estranged from his wife.  Here lies the connection of the story of the Hills like White Elephants, the American man could possibly ended up like the old man in the Well-lighted Place for not wanting children to abide with him in his olden years.

The man in the Hills wanted a woman but not a child.  Reading the two narratives meant that children are very important factors in strengthening marital relationship between spouses and if societies are really interested in making people happy, family issues like divorce must have been given less importance than in providing more support for the education of marriage.  Those who believed in divorce are naturally not in favor of marriage and this leads to a decline in family life or values of life itself.  Divorce admittedly is one of man’s most painful human experiences, makes life patterns difficult for children because of having two households that makes living very uneconomical too.

People who are afraid of complications are afraid to raise children and this leaves them in solitude especially when they became old.  The older waiter concluded that he has nothing but a job, and that what makes him apathetic with the old man probably seeing himself like one of his kind someday. However, he believed more in an unchallenged but less complicated life for which many are drawn to follow that path today.

Undoubtedly, Hemmingway represented the younger waiter as the man who has confidence and youth even if he’s quite a brute when he treats the equally dignified men mentioned in the story.  Dignified in such a way that they are straight men but aren’t lucky enough to find a woman of their dreams.  The younger man exudes life and said to himself that “I am all confidence (Hemingway “A Clean, Well Lighted Place”)” for which the other man agree by saying he has everything meaning that he is a complete man.  Among the three characters, it is the younger waiter who is able to reach the point of having experienced a happy existence.

The hills represent the reproductive faculty of a woman, her unique role of becoming a mother.  The man in the story is against it because in his belief children are not an important business in their relationship.  Child rearing for him is a very uncomfortable arrangement and getting an abortion is the easiest way to remove that obstacle.  He even commented that it is what everybody is doing so there is nothing wrong with it in which the young woman did not agree by saying she does not care about her self.

The man in the story has a mistaken view about mutual love; he insists that Jig is only his most important possession and nothing more.  He could not care even if she lets him realized how much her pregnancy mean to her that“ they’re lovely hills, and they really do not look like white elephants (Hemingway “Hills Like White Elephants”).” The man admitted that he completely doesn’t care about the baby that Jig carries in her womb.   The man refuses to father her child and that frustrates her to the point of wanting to scream even in public.  She can not believe what she hears despite the man kept saying “I’d do anything for you. (Hemingway “Hills Like White Elephants”)”

After the argument, it was very unlikely that the girl easily regained her composure by saying that she already feels better which is contrary to what she wanted to presume when she told her man that the baby is theirs and she asked him to wait and see.  The reader is left to decide whether the two will proceed with the plan of aborting their child or if Jig will be strong enough to stand by what she believes.

Even in these modern times, motherhood which is a gift to everywoman is being denied whenever she is not capable of raising a child even economically. Our present society do not stand by her side to assist her fulfill her gravest responsibility when she is most in need of it.  Unlikely, a society who calls themselves civilized but at the same time prevents her women the dignity of motherhood when it promotes and legalized abortion cannot be truly called a well developed human society for even in the animal kingdom, these irrational creatures knows how to take care of its young.

In fact it is a very mistaken idea to remove children from the view of human love because mutual love is culminated through the fruit of love itself and is authenticated by giving service towards another.  This unity is the basic cell of society which we call family.  Today families are being threatened to decline because of the current problems regarding labor practices and housing decline due to economic crises.

The man’s hedonistic view of life obscure the magnificence of men’s calling to parent a child.  These are men probably who are born to societies in which they did not felt the caring hands of a mother.  They are those who abused the submission of women to their man and this power made women unequal to men.  This has been the constant battle even today when in every two marriages one possible divorce petition is being filed.

A Clean, Well-lighted Place is a place where men’s heart wanted to find its rest and in our terms the place we call home.  It is in every man’s longing to have his or her home a sanctuary and their beds an altar.  The family which is a place to grow and mature is important for all persons to develop his full potential.

In contrast, the Hills which represent the fruit of human love which is a human person became an impossible dream or treated as a white elephant because of man’s ignorance by defeating the purpose of life itself.  If there will be no new persons there will also be no new families which mean that there will be no one to continue the great works of our civilizations.

Man’s greatest happiness on earth is to belong in a family where every member helps each other and is united in harmony towards another.  However, this can only be fully realized when society are fully capable of understanding and improving the lives of all families which is the nucleus of all humanity.

This vision of happiness can only be made possible through the equal sharing of men and women as equal individual who have equal dignity despite of their individual differences, to the woman her femininity and the man his masculinity.  In fact, this differences are what really makes them fit to help one another attains perfection.

A Clean, Well-lighted Place and Hills like White Elephants. (2017, Mar 01). Retrieved from https://studymoose.com/a-clean-well-lighted-place-and-hills-like-white-elephants-essay 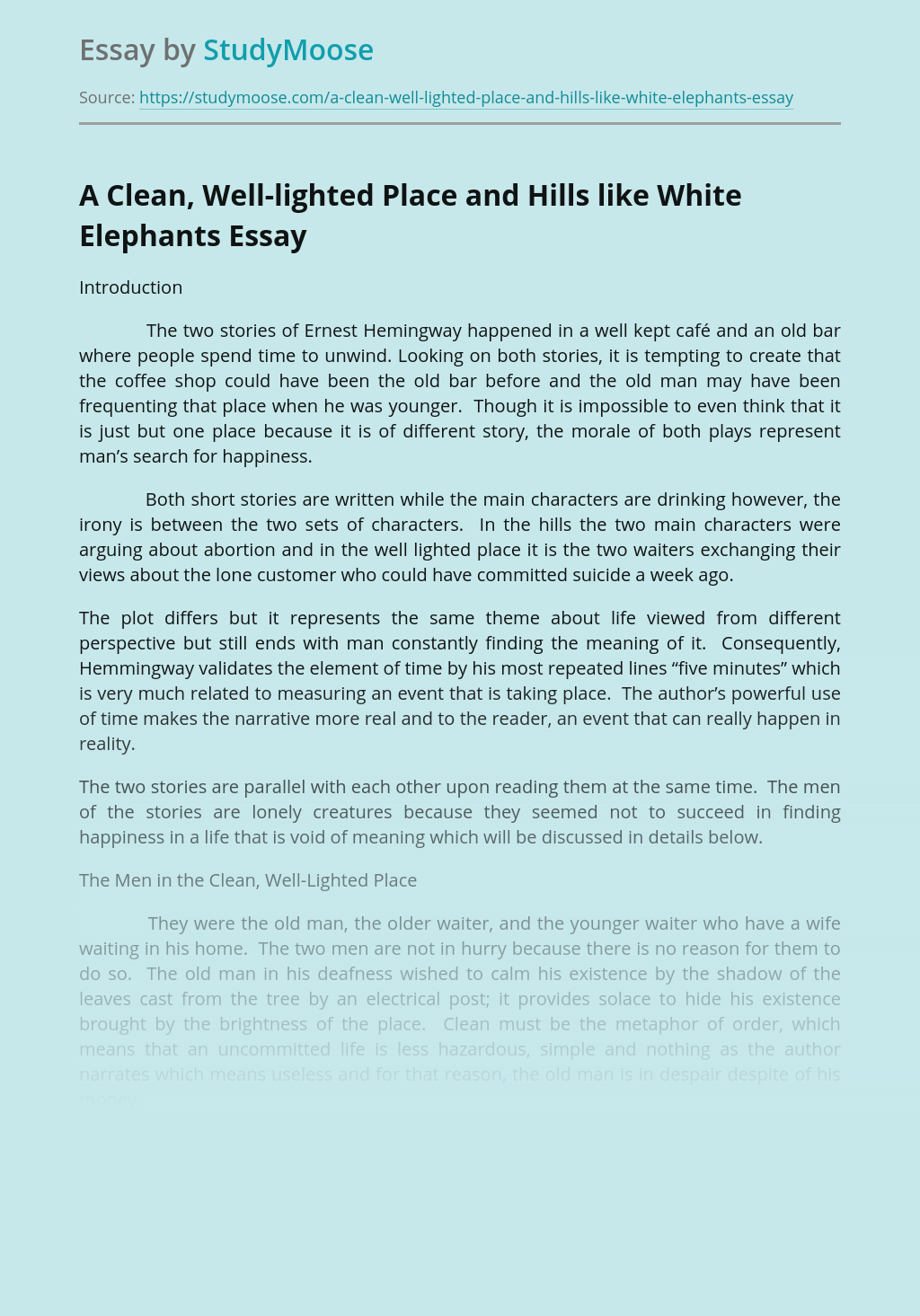