Again in Act 3, Abigail uses her manipulation techniques to gain power over Judge Danforth, who himself is also a powerful character. She tells Danforth, “If I have to answer that, I will leave and not come back again. ” This illustrates that Abigail could be losing control of the situation but then regains her power by, again, turning the situation around so it seems she has not done anything wrong in the first place and that someone else has lead her to what has happened.

Don't use plagiarized sources. Get your custom essay on
“ Three characters ”
Get custom paper
NEW! smart matching with writer

Throughout the play, Abigail abuses the fact she has slept with John Proctor and uses it to her advantage as she still loves him.

In Act 2, Mary Warren warns John, “Abby’ll charge lechery on you, Mr Proctor. ” This shows us that she would do anything to save herself, even if that meant hurting the people she loved, just as long as she was safe. Abigail’s status in society changes due to everything that has happened.

As she tells more lies, she goes from being a slave to becoming a local hero and a celebrity. This is Abigail’s power. Events get out of hand when innocent people begin to die. Their deaths can be seen as murder, which would portray Abigail to be a killer.

An important scene for Abigail is in Act 3, where she appears to see a yellow bird in order to escape Hale’s accusations, who has always seen Abigail as false. “Why-? (She gulps. ) Why do you come, yellow bird? ” Automatically, Danforth believes her deception and turns against Mary Warren.

John Proctor knows Abigail is lying and so tries to show this to Danforth with Hale’s help, but is silenced straight away. Towards the end of the scene, Abigail has managed to turn the situation around so that Mary Warren turns against John and, in doing so, returns to Abigail and the girls to save herself from an almost certain death.

By writing this scene, I believe Miller was showing off Abigail’s power of manipulation at its best. By comparison, Danforth does not manipulate other characters nearly as much as Abigail but it is still apparent that it happens. The main scene which includes Danforth manipulating others is in Act 3 where he interrogates Elizabeth about her husband, John Proctor, and Abigail, “(reaches out and holds her [Elizabeth’s] face, then) Look at me! To your knowledge, had John Proctor ever committed the crime of lechery?

(In a crisis of indecision she can not speak. ) Answer my question! Is your husband a lecher! ” Danforth asks this question repeatedly until he gets the answer he wants to hear. Even if Danforth had realized Abigail was deceiving him and everyone else, he would have carried on with heir lies to protect his reputation as one of the best judges in America because eh would not have wanted his peers to know he was fooled by a group of slave girls who appear to be at the bottom of society.

Another example of Danforth’s power and manipulation is, again, in Act 3 when he talks to John Proctor about stopping his attempt of overthrowing the court proceedings. “We have thought it too convenient to be credited. However, if I should tell you know that I will let her be kept another month; and if she begin to show her natural signs, you shall have her living yet another year until she is delivered- what say you to that? (John is struck silent. ) Come now.

You say your only purpose is to save your wife. Good, then, she is saved at least this year, and a year is long. What say you sir? It is done now. (In conflict, Proctor glances at Francis and Giles. ) Will you drop this charge? ” This shows the audience that Danforth is a very persuasive character and that he has power over a majority of the other characters including Proctor as he has made him re- think what he had planned to do, which was to prove everyone’s innocence. 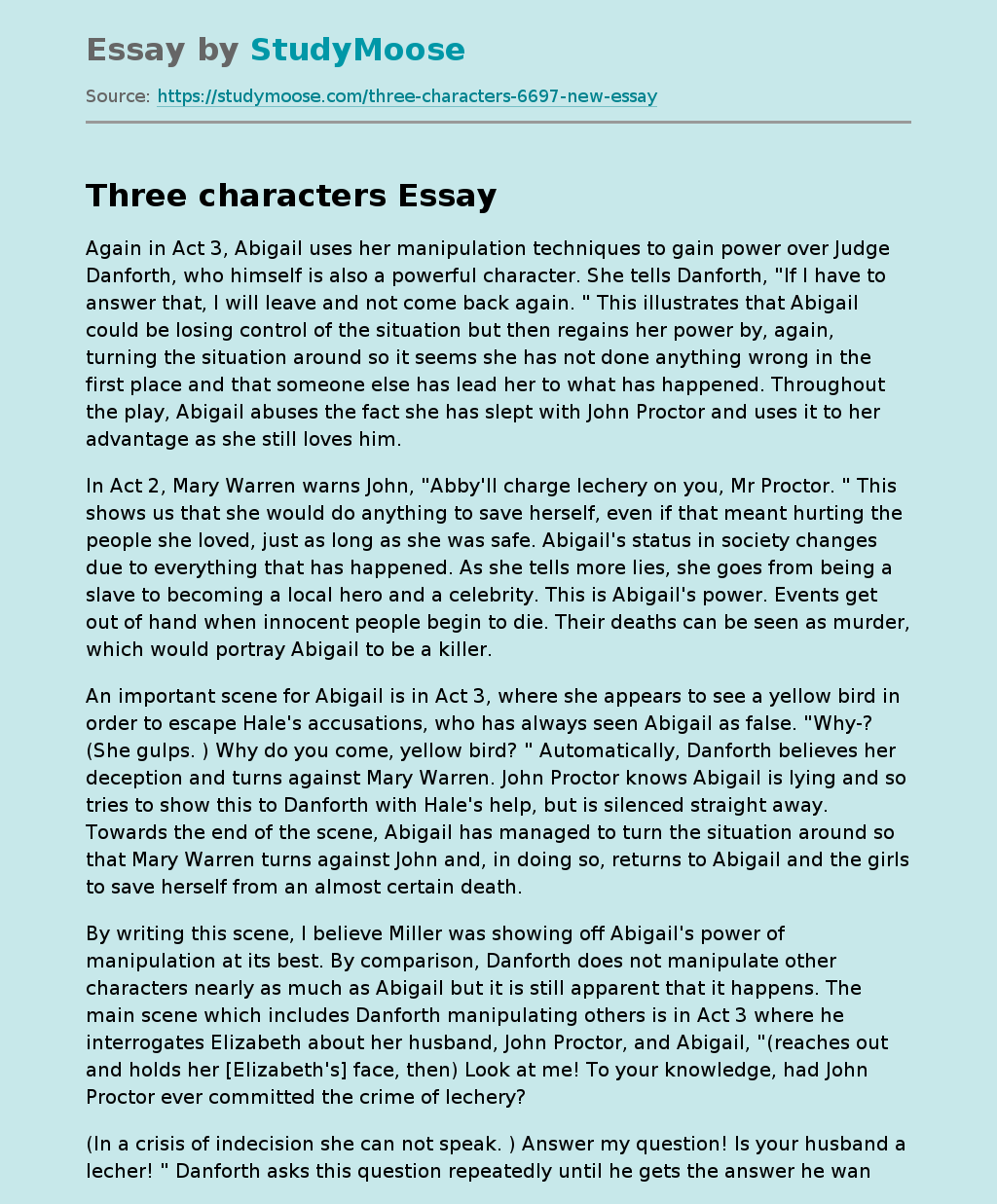