Shakespeare’s Othello: Iago’s Manipulation of Others

W.H Auden once said, ‘There is more than meets the eye’, meaning that there may be a hidden meaning behind a person’s appearance. Lying and manipulation are common in life, and many people hide their true desires with masks. In William Shakespeare’s play Othello, the main character Iago is the same as those dishonest people. Behind his fake appearance as a moral and loyal friend with good intentions, Iago is in fact a jealous and dishonest evil person who creates violence and accidents between characters.

Don't use plagiarized sources. Get your custom essay on
“ Shakespeare’s Othello: Iago’s Manipulation of Others ”
Get custom paper
NEW! smart matching with writer

” The incidents that take place at the opening of the play, at the same time as the change in the attitude of lago” (Badger) throughout the play, Iago uses his precise strategic acts of manipulation to weaken each character in the play. Iago manages to exploits Rodrigo’s love for Desdemona, fools Cassio into believing they have a friendship, and toys with Othello’s mind by playing on his self-doubt. Slowly but surely Iago manipulates the people around him by using their weaknesses.

One of Iago’s first victims is Roderigo who’s easy-to-trick and childlike (because of a lack of understanding) to Iago’s tricks, Roderigo’s sexual desire for Desdemona makes it so easy for Iago to trick him. His obsession causes him to definitely believe anything Iago says about getting Desdemona. Along with lies Iago tells about winning (by force) Desdemona he also tricks Roderigo of his fortune. He tricks Roderigo, convincing him that all the gold and jewels will be given to Desdemona as a sign of his love for her, when in fact he plans to keep it for himself.

Iago says:” Thus do I ever make fool my purse” (Shakespeare, I.ii.347). Evidently, Iago misleads Roderigo once more by convincing him to kill Cassio. Rodrigo who is to childlike (because of a lack of understanding) to see what is going on gets blinded for fear of losing Desdemona. Roderigo says:” I have no great devotion to the deed/and yet he hath given my satisfying reasons/ ‘Tis but a man gone. Forth, my sword he dies” (Shakespeare, V.i. 8-10). Poor Roderigo falls victim to his plan in attempting to kill Cassio. Fundamentally, Iago kills Roderigo instead. Iago ruthlessly says:” I have rubbed this young quat almost to the sense/ and he grows angry/no, he must die. But so, I hear him coming” (Shakespeare, V.i. 11-23). This evidence proves how Iago took advantage of poor Roderigo for his own personal need, and then disposes of him once he is no longer a benefit. Finally, Roderigo is held hostage in Iago’s big dishonest plans, there was no good reason for and captured into slavery with his blinded sexual desire for Desdemona, in the end Roderigo pays the price and ends up dying.

Sadly Roderigo isn’t the only one of Iago’s many victims, Cassio trusting nature with Iago allows him to capitalize him by pretending to be his friend secretly being dishonest to him “One need not look for a clear sense when he toys with the word about Cassio; the question is how it came to be so mystifying”( Empson) . In the play, Iago encourages Cassio to drink while on the job, finally getting him drunk to cause noise and confusion. As a result to that, Othello dismisses Cassio from being his lieutenant. In the play we’ve come to realize that Cassio’s reputation is very important to him and having him being dismissed makes it so easy for Iago to step in and play his tricks on him. But in fact, despite Cassio alcoholic ways, Iago does betray Cassio by telling Montano that Cassio has a drinking problem Iago tells Montano: “Tis evermore the prologue to his sleep. He’ll watch the horologe a double set/ if drink rock not his cradle” (Shakespeare, II.ii.115-118). And if matters couldn’t get any worse, Iago gives Cassio hope into getting his job back, by telling him to tell Othello’s wife, Desdemona. Iago’s plans may have seems helpful, but of course poor Cassio did not see what was in store for him. In a sense, Iago is the devil in disguise, taking evil advantage of Cassio’s trusting nature. Just like he used Roderigo and is planning to do to Othello.

Lastly, of Iago’s victims and the reason for all of this is, Othello. Othello’s personal (sources of worry and stress) bring him to his own loss of wealth. Being an outcast, as the only black man in a society throughout the whole play he’s referred to as ‘The Moor’. Especially, because his relationship with Desdemona is ‘a part of period when marriages such like theirs was viewed upon as rare and uncommon’. In the beginning of Iago’s plan to destroy Othello, Iago hints that Desdemona is being unfaithful towards Othello, making Othello feel as if he doesn’t belong to her ‘world’. In the play Iago says: “As, to be bold with/not to affect many proposed matches/of her own clime, complexion, and degree/ whereto we see in all things nature tends” (Shakespeare, III.iii.232-236). On some degree Desdemona would seem like she would prefer Cassio instead, who’s like her in age, race, class, as opposed to Othello

Who is much older, black, and unattractive. Iago uses Desdemona’s gender and past in order to convince Othello, “She did deceive her father, marrying you/ and when she seemed to shake and fear your looks/ she loved them most” (Shakespeare, III.iii.210-213). Since Desdemona betrayed her father, why wouldn’t she betray Othello? Piece by piece, Iago is slowly tearing Othello down. Iago messes with Othello’s mind so much that he doesn’t believe anyone but Iago. He fools Othello with lies, using his self-doubt, and jealousy to turn him against Desdemona. “Oh, damn her, damn her! / come, go with me apart. I will withdraw/ to furnish me with swifts means of death/ for the fair devil. Now art thou my lieutenant” (Shakespeare, III.iii.482-485). Without a doubt, Othello see’s Iago’s lies as truth, and even promotes Iago to his desired position. Like many of us before we can completely believe something we need actual proof. In the play there are two different situations in which Iago actually uses “proof” to convince Othello. Othello gave Desdemona a handkerchief, as his first gift to Desdemona as a token of his love, which Desdemona cherished. In the play Iago convinces his wife to steal it from Desdemona because he knows that it has a lot of sentimental value to Othello and he would be distraught if he finds out his wife no longer wants him. The handkerchief is a symbolism of Othello’s mysterious past and his ‘exoticness.’ He tells Desdemona that an Egyptian ‘charmer’ gave it to his mother and that it would keep his father ‘faithful’ and under her spell. Another form of “proof” Iago tells Othello of Cassio’s sexy dream he supposedly had one night while he was lying in bed next to Iago.

In sleep I heard him say ‘Sweet Desdemona,

Let us be wary, let us hide our loves;’

And then, sir, would he gripe and wring my hand,

Cry ‘O sweet creature!’ and then kiss me hard,

As if he pluck’d up kisses by the roots

Finally, Iago gets exactly what he wants in the end. He uses each character’s weaknesses to succeed his manipulative schemes against them. The naïve and innocent Rodrigo, trusting Cassio and insecure noble Moor all due to Iago’s actions, Iago’s convincing nature and ability to manipulative every character in the play. After everything’s been said and done, Iago’s skillful mind brought the downfall and deaths of many, and now he lives with the consequences of his actions and weight of all the deaths he caused on his shoulders. “He plays the jovial blackguard to Cassio and Roderigo and the philosopher and mentor to Othello just as the lines lead him, with perfect intelligibility and with so much point, distinction and fascination that the audience loads him with compliments”(Bernard Shaw).

Shakespeare’s Othello: Iago’s Manipulation of Others. (2021, Apr 26). Retrieved from http://studymoose.com/shakespeare-s-othello-iago-s-manipulation-of-others-essay 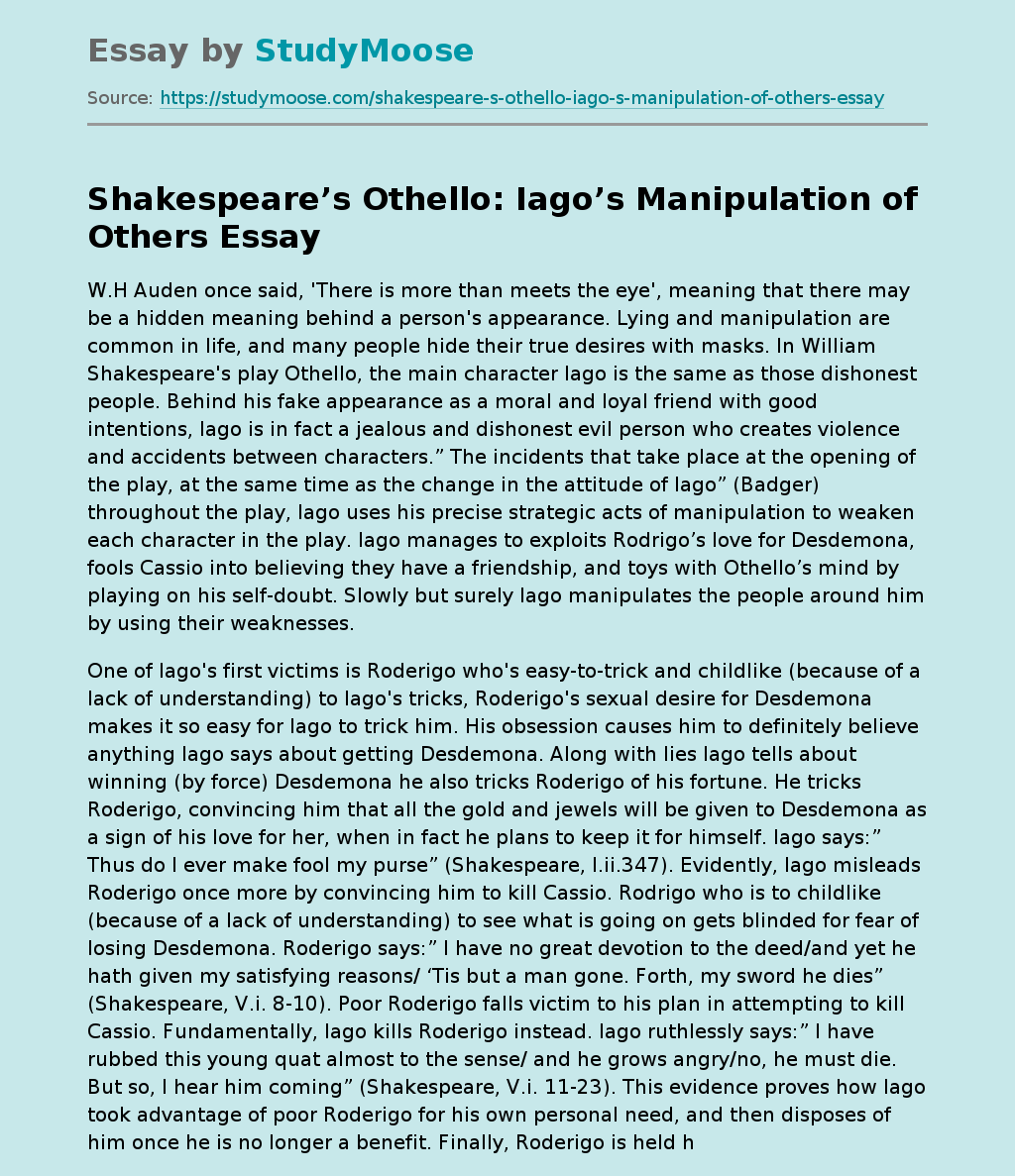