The play, Othello by William Shakespeare is a romantic tragedy in which the protagonist and title character, Othello falls victim to the manipulation of the story’s antagonist, Iago. Heroes in literature have existed since Gilgamesh fought Enkidu in 2150 B.C. In Homer’s Odyssey, the protagonist is depicted as a paragon to his respected story. Even though heroes have traits which can result in awe or envy, some of these heroes are just as flawed as the real life human beings who read about them.

Don't use plagiarized sources. Get your custom essay on
“ Jealousy, Gullibility, Arrogance and Manipulation in “Othello” ”
Get custom paper
NEW! smart matching with writer

Shakespeare’s Othello encompasses the essence of a tragic hero whose character flaws are well-developed and relatable to the audience. These character flaws define the hero through his interactions with other characters, as well as illuminating many universal themes throughout the play. The conflicts within story permit the hero (Othello) to succumb to the one tragic flaw which has plagued mankind since the dawn of time. His flawed trait is insecurity. Insecurity leads the main character to his demise and enlightens the audience to explore the play’s themes: jealousy, gullibility, arrogance, and manipulation.

In the beginning of the play, Othello is given the task of selecting a lieutenant. It comes as a surprise to his longtime friend, Iago that he would be overlooked in this selection and the decision of the position would go to Cassio, another character in the play. This event would begin the conflict that resonates throughout the story, and eventually develops the tragic flaw of Othello. Iago begins to manipulate Othello by pretending to as well as giving the other character flaws also.

Othello, who faithfully trusts Iago, exhibits the damaging character trait of gullibility. A general of Othello stature, know that jealousy comes in many subcategories such as romantic jealousy, sexual jealousy Othello can be described as Male-Sexual Jealousy. Male sexual jealousy “functions to defend paternity confidence and is therefore expected to be a ubiquitous aspect of male psychology,” (Daly et al.).

Othello is introduced as a noble Moor general who has an idealistic point of view. As a leader of an entire army, Othello is shown to be well-respected with a stellar reputation among his fellow Venetian citizens. Whenever other characters interact with him in the play, they greet him with love and respect as anyone would an old friend. However, the one person he focused on was the love of his life, the fair Desdemona. Othello loved this woman very much that he would give his life for her; Desdemona felt the same way, as she started to fall under his “spell”. Othello explains the reason as to why Desdemona fell for him, that “she loved [Othello] for the dangers [he] had passed, and [he] loved her that she did pity them” (1.3.742). From then on, they would later marry and live together for the rest of their lives.

However, Othello and Desdemona’s love would not last forever, for there is an obstacle in front of them: the “other man”. The “other man” is the person having a sexual relationship with Desdemona instead of Othello himself, the husband. This suspicion that makes its way into Othello’s mind begins when Iago, the antagonist of the play, begins telling lies to Othello to ruin his life for reasons unknown. Acting as a true loyal friend to Othello, Iago explains to him his “curiosity”, not knowing he’s setting him up for the trap of jealousy. Iago claims he is thinking Desdemona and Cassio, Othello’s trusted lieutenant and another close friend of his, might be spending too much time together. Knowing he has increased Othello’s interest, Iago continues his loyal-friend-façade and says to him:

Othello seems to be jealous of Cassio, maybe for his looks or maybe for his mannerisms and charms. Knowing that a man like Cassio is able to charm fair maidens like Desdemona can make any man envious. Further into the play, Iago keeps tricking Othello into thinking that Cassio is not really the charming friend that he knows, but a womanizing scumbag who can steal any woman from any man. After experiencing these tricks, Othello starts becoming delusional, gaining negative thoughts of his wife not being the woman he thinks she is. The possibility of Desdemona and Cassio, his own wife and close friend, having an affair seemed small to Othello as the thought of that has never occurred to him since he came back from the war. Since he married Desdemona, he has been naïve that everything would turn out well in the end. When Iago put that thought into his head, all those thoughts of having a happy life with Desdemona were replaced with thoughts of losing her to a “better” man.

Sometime later during the play, as Iago keeps tricking Othello by setting up false evidence of Desdemona and Cassio’s affair. As Iago shows Othello Desdemona’s handkerchief he “found” (really put there by Iago’s wife, Emilia) Othello begins to firmly believe that the affair is real:

What makes Othello’s jealousy so unique to regular jealousy is that his jealousy takes complete control over his judgement to the point of wanting to kill Cassio and cursing Desdemona’s name, showing that the once proud hero of Venice is not the same person anymore. Othello is shown to be very rude to Desdemona to the point of calling her a “whore”. Filling him with suspicion in the two most precious people in his life. At first, Othello denied that Desdemona and Cassio are having an affair, but then he starts thinking why that would happen. In 3.3.778, after Iago leaves to search for evidence about Desdemona’s affair,

This extraordinary fault has been famous for over five centuries that doctors named a type of mental illness after the character, called “The Othello Syndrome”. The closest definition of this sickness is “a delusional belief in infidelity of the spouse” (John and Dewhurst 367). This is often caused by a situation between the husband, wife, and “the other man”, as the husband start to believe that the wife and the man are having a sexual relationship. The husband starts to compare himself to the other man by comparing looks, strength, or at what one does for a living.

These flaws can result in a bias limitation and unsettled imperfection which can create problems resulting in a character’s downfall. Personality disorders, vices, phobia, prejudice, or deficiency present in a character who may be otherwise very functional. William Shakespeare is no stranger to this kind of story element, as character flaws are present in most of his plays such as Macbeth, Romeo and Juliet, Hamlet, and Othello the Moor of Venice. Othello is a strong example of a flawed protagonist; this play tells the story about Othello, the title character, enjoying his life with his new wife and his friends and allies in arms until he gets manipulated by Iago, who is Othello’s aide and the main villain, and becomes the monster that causes things to fall apart. 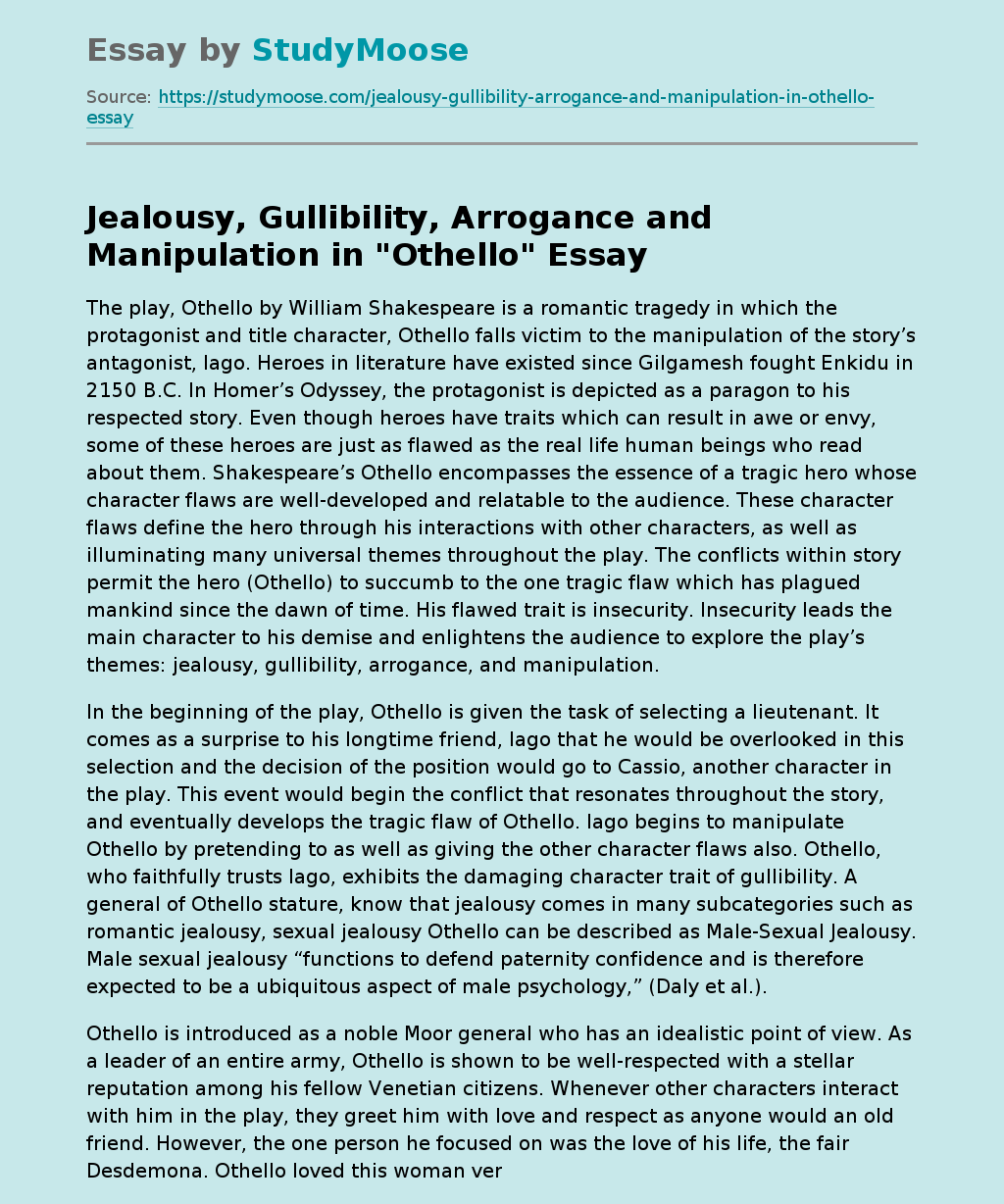