Ambition is a strong desire to do or achieve a goal. The extent of such ambition is easily influenced by other inner factors, such as gullibility because it allows the mind to believe in things that will bring them closer to their ambitious goals. In William Shakespeare’s play, The Tragedy of Macbeth, the protagonist Macbeth, is a representation of such gullibility. Macbeth allows his gullibility to overwhelm him in certain situations that appeal to his ambition. However, the increasing levels of his gullibility throughout the play would lead him to his own isolation and downfall.

Don't use plagiarized sources. Get your custom essay on
“ Macbeth’s Tragic Flaw ”
Get custom paper
NEW! smart matching with writer

For instance, by meeting the witches and listening to their prophecy, he slowly begins to believe the prophecy which affects his decision-making in the future. In addition, the influence Lady Macbeth has over Macbeth allows her to manipulate him to believing her plan for murder.

Furthermore, by believing in the apparitions’ three messages, Macbeth essentially greets his end at the door by having a false sense of security.

As a result, Macbeth, who was once a hero, slumped down to become a murderous and tyrant king. However, Macbeth is not at fault for his unfortunate transformation. Macbeth’s tragic flaw is his ambition, which is heavily influenced by his gullibility because it eventually exploits enough of his ambition that causes his isolation and downfall. Macbeth’s gradual isolation is caused by his gullibility exploiting his ambition from his initial encounter with the three witches and their prophecy. The prophecy is the root of Macbeth’s isolation and downfall as the witches predict that Macbeth is the Thane of Cawdor, and King of Scotland.

As the witches vanish, the two exchange dialogue with each other, “Your children shall be kings./ You shall be king./ And Thane of Cawdor too. Went it not so?” (1.3.89-91).

Though Macbeth and Banquo both took it lightly as the claims held no evidence to back them up, the encounter ultimately implanted the idea of Macbeth becoming king in the future. By having the idea of this ambition within him, it leads into the next situation where his ambition begins to bloom. Ross and Angus arrive and greet Macbeth as the Thane of Cawdor. While Macbeth is astonished, Banquo warns him that such messages, “tell us truths,/ Win us with honest trifles, to betray ‘s./ In deepest consequence.” (1.3.134-138). On the other hand, Macbeth completely disregards Banquo’s warnings and displays his gullibility as he continues to mumble to himself about the prophecy holding true. But, he is foolish to do so as he bases his accusation off of the statement, “Two truths are told” (1.3.140). Afterwards, his ambition is revealed as he strives to be king.

As a result, both his gullibility and ambition intertwine and start his path to isolation and downfall. Eventually, Macbeth becomes king after a series of events, and he fulfills a part of the prophecy. By letting his ambition engulf himself, his ambition soon becomes the desire to secure power. As his gullibility grew, so did his ambition. He believes in the second part of the prophecy of Banquo having sons who will be kings by declaring Banquo as a threat to his power and orders his murder. This action solidifies the idea that Macbeth’s ambition strengthens his gullibility towards the prophecy as he desires to maintain his power. By believing that Banquo is a threat, he eliminates him to prevent any threat to his ambitious goal of securing power. This only continued to grow throughout the play after several murders of “threats” until his eventual demise. As a result, by hearing the witches’ prophecy, it allows his gullibility to exploit his ambition that will influence his future actions leading to his isolation and downfall. Macbeth spiraled further toward his downfall as he was foolish to allow Lady Macbeth to pick on his ambition, leading to his gullibility of the plan to kill Duncan. Macbeth’s flaw of being gullible allows Lady Macbeth to bombard him with accusations and comments that changes Macbeth’s original decision to not kill Duncan. To be more specific, the first thing Lady Macbeth addresses before Macbeth falters in the end is his inconsistency and cowardice. She states that he is inconsistent because he mentioned how hopeful he was when he heard of the prophecy, but then he concedes from chasing after his ambition. By attacking him personally by saying that he is a coward for, “Letting ‘I dare not’ wait upon ‘I would’,” (1.7.48-49), she instigates Macbeth into defending himself and making him more susceptible to persuasion. Instead of holding his ground on the decision of not killing Duncan, he slowly loses his ground as continues to be attacked. This easily leads into Lady Macbeth’s next tactic of attacking Macbeth’s manhood because Macbeth lived in a chivalrous society where men were symbols of manhood. By attacking Macbeth’s manhood, she is implying that Macbeth has become a lesser man. Furthermore, she adds on, “And to be more than you were, you would/ Be so much more the man.” (1.7.57-58). She implies that by murdering
Duncan, he will become a greater man. This sets the stage for Lady Macbeth’s final tactic before Macbeth succumbs to her persuasiveness. To fully persuade Macbeth, Lady Macbeth exclaims to Macbeth of how effortless the plan of killing Duncan is. By doing this, she continues to appeal to Macbeth’s ambition of becoming king and how he can easily obtain the throne. His gullibility takes over as he eventually gives in and goes on with the plan. Therefore, though Macbeth was stern on not killing Duncan, Lady Macbeth persuades him through his gullibility and ambition to kill Duncan, which adds on to his downfall. Macbeth’s actions after his encounter with the three summoned apparitions exposes his gullibility and ambition as they influence Macbeth to put the final stake in his own downfall. During his second visit to the witches, they summoned three apparitions, each representing something that would prove significant later on. Macbeth’s gullibility shines when he believes in the three apparitions with no questions asked. At first, he was told by the first apparition to be wary of Macduff. Since Macbeth assumed that this meant Macduff was a threat to his overflowing ambition, he believed in their message and decided to send murderers to Macduff’s castle and eliminate the household. Macbeth, again, solidifies his image of a tyrant king by resorting to murders to take care of threats to his ambitious goal, further propelling him towards his downfall. The second message was that, “none of woman born/ Shall harm Macbeth” (4.1.91-92). Macbeth started flaunting that his castle would be able to fend off a siege from the English forces led by Malcolm. However, most of his soldiers left and joined the other side of the forces because of his obsession with power. This indicates that he was slowly becoming more isolated as soldiers continuously left. Furthermore, his inevitable end was soon to come as he met face-to-face with Macduff. While believing the first two messages, Macbeth became reluctant to fight Macduff because Macbeth’s, “soul is too much charge” with killing Macduff’s family. But, the second apparition’s message was misinterpreted as Macduff was not born of woman. This resulted in Macbeth being scared, displaying that his gullibility in the messages proved false and threatened his ambitious goals.. Next, the final message was that, “Macbeth shall never vanquished be until/ Great Birnam Wood to high Dunsinane Hill/ Shall come against him.” (4.1.105-108). By believing in the third apparition’s message, he ignored all the reports
of enemies near his castle. However, that message was misinterpreted, as so did the others, as the trees were “moving” towards the castle. As a result, by assuming literally that the trees themselves could not move, he had let his castle be surrounded by the English force, ultimately losing everything. Therefore, in believing the messages from the apparitions, Macbeth’s ambition fed his gullibility, leading him to turn a blind eye on situations which normally would be looked upon. All of which led to his demise. Due to Macbeth’s trait of gullibility, it exposed his ambition multiple times throughout the play, causing him to take actions that would amplify his isolation and downfall. By meeting the witches and listening to their prophecy, Macbeth had begun his spiral downwards by letting his ambition consume him and killing Banquo. In addition, by giving into Lady Macbeth’s persuasiveness, his transformation from a respected nobleman to a murderer added onto his isolation. Lastly, by listening to the apparitions’ messages, Macbeth induced a false sense of security for himself which led him to eventual demise. In the end, Macbeth’s isolation and inevitable downfall was brought upon by his own gullibility and ambition. 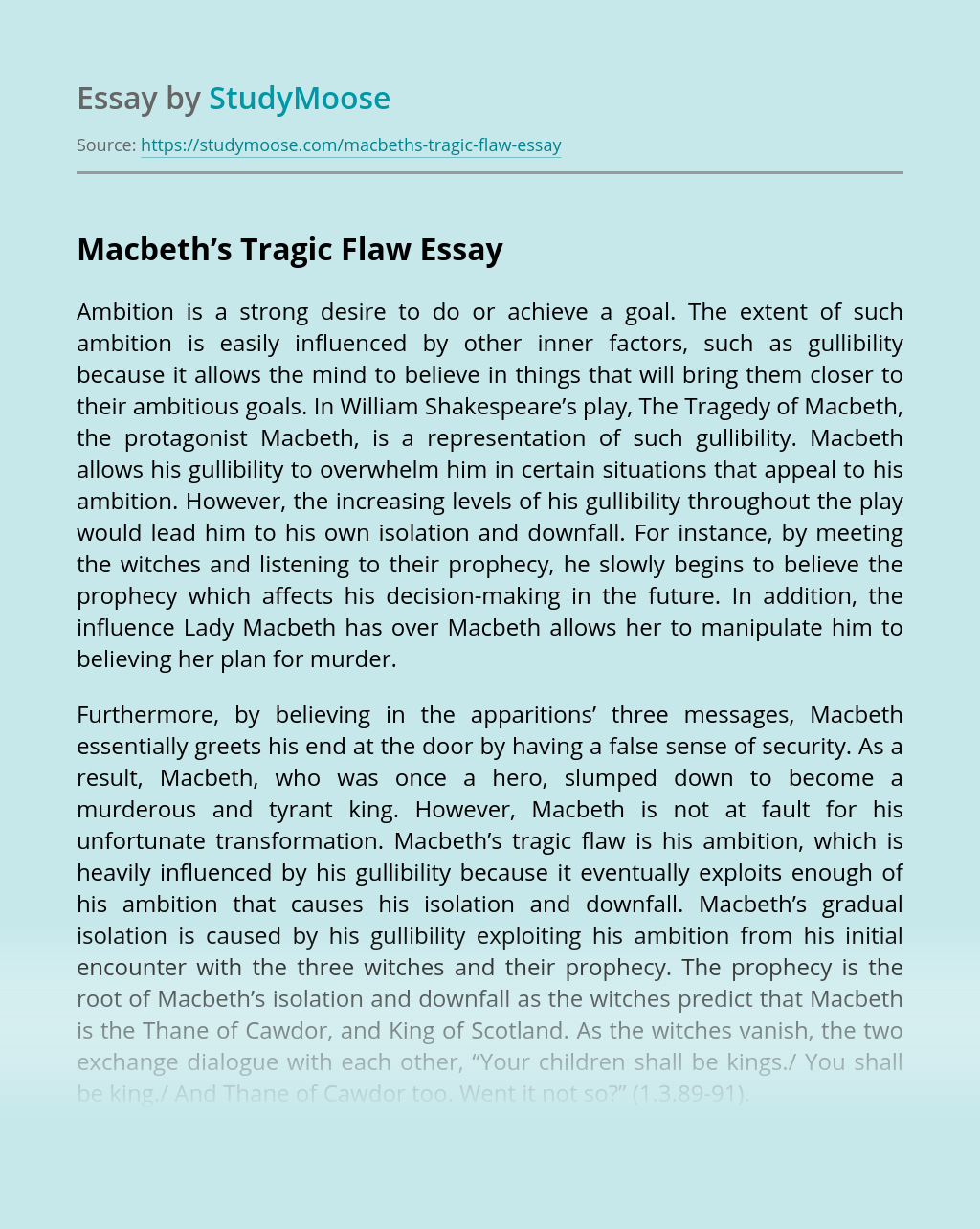