The Tragedy Of Macbeth

According to Aristotle’s definition Shakespeare’s work of Macbeth is classed as a tragedy. In order for a piece of work to be called a tragedy it must follow nine rules and one of which is the rule I will be focusing on today. This rule is “The tragic hero effectively evokes both pity and fear.” In this essay I will be answering the question “to what extent does Shakespeare create pity for Macbeth?”

Don't use plagiarized sources. Get your custom essay on
“ The Tragedy Of Macbeth ”
Get custom paper
NEW! smart matching with writer

Throughout the soliloquy Macbeth mentions two separate things regarding the killing of Duncan, at one point he says “Against the deep damnation of his taking off.” The phrase “taking off” refers to the killing of the king, another example is “upon the sightless couriers of the air, shall blow the horrid deed in every eye.

This quotation means that Macbeth’s only motive in this attack and murder was ambition.

This also tells us that Macbeth was “pushed” into the “deed” that he committed. Later in this scene we see that Macbeth was indeed persuaded by Lady Macbeth to do the act, in line 50 Lady Macbeth says “When you durst do it, then you were a man;” in this quotation she is questioning his manhood, she is saying that Macbeth is not a man but if he kills Duncan then he is a man. The evidence shown strongly suggests that Act 1 Scene 7 does create pity for Macbeth.

The next part of the play, which is significant in creating pity for Macbeth, is Act 2 Scene 1 which includes Macbeth’s second soliloquy “Is this a dagger I see before me, the handle towards my hand? Come let me clutch thee:” Macbeth, in this quotation, is hallucinating; he is seeing a dagger in front of him. It is like he has foreseen the future and that it is almost inviting him to murder Duncan. “I have thee not yet I see thee still. Art thou not, fatal vision, sensible to feeling as to sight? Or art thou but a dagger of the mind, a false creation?” He is questioning the dagger, he can see it but he cannot feel it so he believes it is just a figment of his imagination.

Then he says “Proceeding from a heat oppressed brain? I see thee yet, in a form as palpable.” He is saying he is ill and blaming the fact that he has a temperature, “heat oppressed brain” and that is why he is seeing those images. As the soliloquy is about to finish Macbeth hears a bell ring “I go and it is done, the bell invites me, hear it not, Duncan; for it is a knell, that summons thee to heaven, or to hell,” He thinks that the ringing of the bell is a sign for him to kill Duncan and then goes. It is felt from this scene that pity has been created because it is showing that Macbeth is unstable and his mind is not at its sharpest and at its best.

As the play continues there is meant to be more pity created for Macbeth in Act 3 Scene 1 where Macbeth has his third soliloquy through lines 50 – 61. Macbeth compares himself to Banquo, He sees Banquo as valiant and royal but sees himself as evil and harsh. It is rather obvious in these two lines that Shakespeare is trying to create sympathy and pity for Macbeth. In lines 61 – 65 Macbeth describes the crown and the sceptre (him being king) as “fruitless” and “Barren”, He describes the monarchy as fruitless because when he dies he will have no sons or daughters to pass the crown down on to, he is also referring to this when he says “Thence to be wrench’d with an unlineal hand.” Which means that a non-member of his family will take the crown from him. Later on in the scene through lines 65 – 73 he calls upon both fate and darkness as his allies to help him in his evil ways. This implies Macbeth is unstable and desperate as he needs help from two different things, it also implies he needs help to cope with his life. Once again pity is created for Macbeth but he manages to destroy the sympathy and pity as he orders the slaughtering of Banquo but Banquo’s ally Fleance escapes.

Act 3 Scene 4 is one of the most significant and meaningful scenes in the entire play and is the Banqueting scene. In this scene Macbeth is staging a banquet at his home and everyone in Scottish importance is in attendance, between lines 35 and 40 the ghost of Banquo enters the room and sits in the throne. Macbeth is the only one in the room that can see the ghost and begins to become emotionally upset which in turn makes the audience feel sorry for him. He begins to act strangely and guests begin to get suspicious, Lady Macbeth then says “sit, worthy friends: my lord is often thus:” this is clearly an excuse to stop guests getting suspicious, but there is a sense of irony in this as no-one would like a king ruling there country who is mentally unstable, and with that Macbeth has generated more sympathy for himself.

Lady Macbeth then takes her husband aside and says “Why do you make such faces? When alls done, you look but on a stool” This clearly shows that in this stage of the Play Lady Macbeth is the one who is in charge and the one who has a clear head. There is another instance in Scene 4 where Shakespeare creates pity for Macbeth, it is shortly after the murder of Banquo one of the murderers comes in to tell Macbeth that Fleance has escaped death, Macbeth then comes out and says “Then comes my fit again: I had else been perfect; whole as a marble, founded as a rock, as broad and general as the casing air: but now I am cabbin’d, cribb’d, cofin’d, bound into saucy doubts and fears…. but Banquo’s safe?” In this quote Macbeth is clearly panicking, his plans were perfect but have now been ruined. The reference to marble only develops the idea of his perfect plans, as we see marble as a perfect and solid stone. This scene clearly evokes a lot of pity for Macbeth as the audience begins to see that Macbeth’s perfect plan is falling apart. Shakespeare is using similes in the lines Macbeth is speaking just to emphasise the importance and the significance of the quotation

In Act 4 Scene 1 there are three ghostly figures which appear to give Macbeth some words of advice, the first apparition tells Macbeth “Beware Macduff”, the second “Be bloody, bold and resolute” the third “Macbeth shall never be vanquish’d till Birnam wood comes to Dunsinane” In reply to the three apparitions advice Macbeth says “Macduff, what do I fear thee, I’ll make assurance doubly sure” This reply from Macbeth means that he will do anything to aid him to prevent Macduff from doing what he will, later on in the scene Macbeth says, “The castle of Macduff I will surprise; soon upon Fife; give to edge of the sword his wife, his babes, and all unfortunate that should trace him in his line” After Macbeth has made this statement all pity felt for him by the audience disappears as there is no need to bludgeon Macduff’s family.

In Act 5 the undoing of Macbeth is shown. In scene 1 there is a conversation between the gentlewoman and the doctor concerning Lady Macbeth’s well being, soon after, she enters and the audience see how ill she is. She relives the night of Duncan’s murder all over again and is trying to wash the blood off of her hands, there is really no blood on her hands but she is in an ill state of mind and therefore does not know, she continues to clean the “blood” off of her hands, but says that it wont come off and that she can still smell it, later in Act 5 Scene 5, Lady Macbeth dies in a state of mental pain and anguish, at this moment the most pity is evoked for Macbeth.

This is one of the saddest moments in the play and Macbeth makes it worse by saying “Out, out brief candle! Life’s but a walking shadow, a poor player that sweats and frets his hour upon stage, and then is heard no more.” Macbeth is basically saying in this quote that life is pointless and that every species on the planet is one big actor and the world is just one big stage and that life is just one big play.

Afterwards in Scene 6 a message is sent to Macbeth from a lookout that Birnam wood is coming to Dunsinane. Macbeth is shocked as he hears it and goes into a state of denial and calls the messenger a liar and warns him that he should tell the truth. Macbeth goes up to see for himself and sees what he wouldn’t of believed; he immediately calls for his armour, his shield and his sword. Macduff soon arrives and he and Macbeth have a sword fight, Macduff, still with the anger of his family’s slaughtering inside him, draws his sword and decapitates Macbeth. Macduff takes over as the King of Scotland and the play finishes.

In conclusion it is without a doubt that Macbeth is a tragedy, and through its 5 acts and 26 scenes it evokes pity on separate occasions. The question was “To what extent does Shakespeare create pity for Macbeth.” Pity is created almost to the extent that the audience forgives Macbeth for his terrible actions but not entirely. If you take into account all the evidence gathered and make a conclusion you will see that the audience never did and never were supposed to forgive Macbeth.

The Tragedy Of Macbeth. (2017, Oct 14). Retrieved from https://studymoose.com/the-tragedy-of-macbeth-2-essay 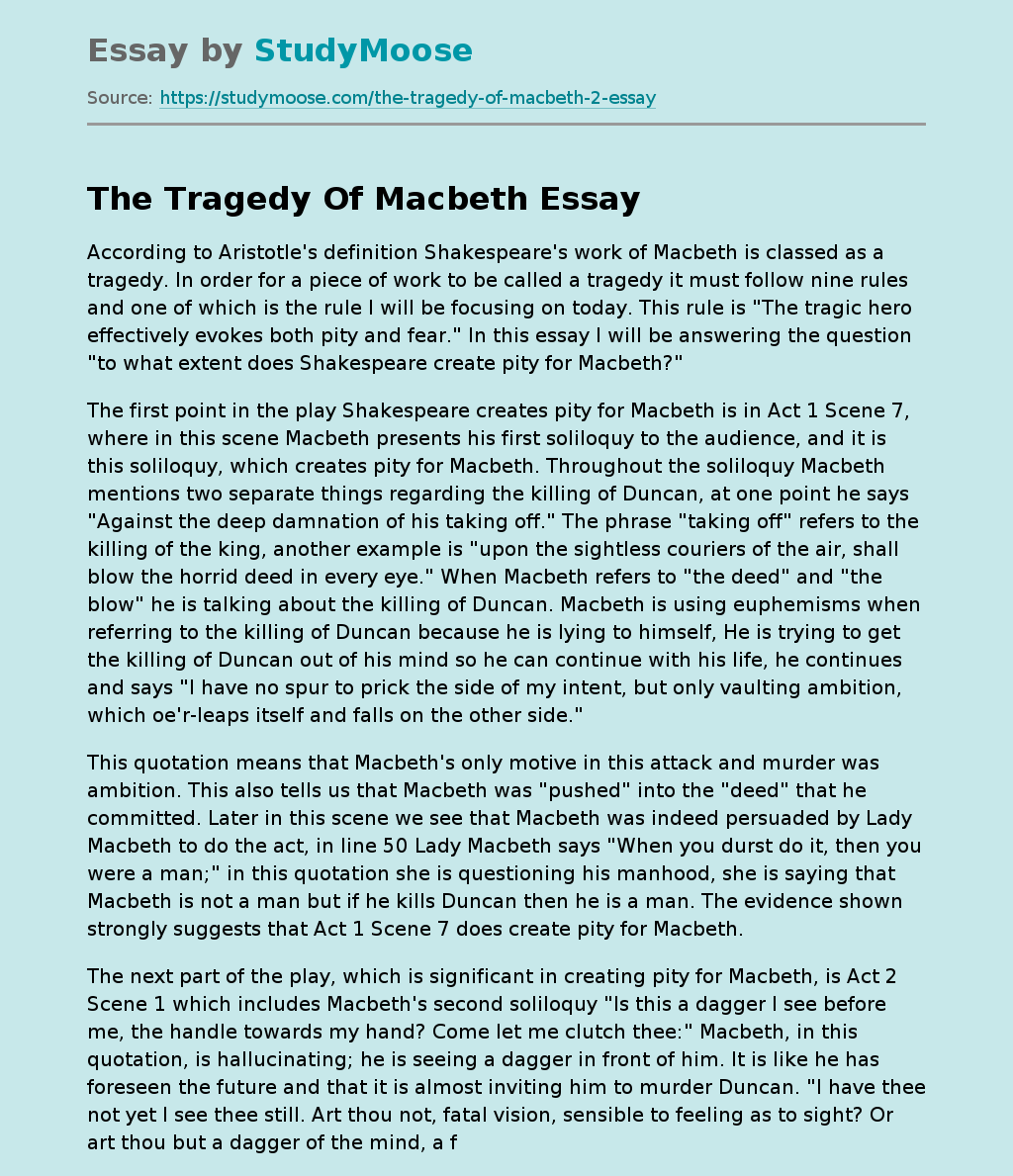