Lady Macbeth is portrayed as Macbeth’s driving force to, as some may call it the dark side. This is how Shakespeare shows her love for Macbeth and also her ambition; she wants the best life possible for him and also for herself. She is portrayed as the more ruthless one in the Macbeth team, but in hindsight she really only encourages Macbeth to be the best of his abilities she doesn’t kill anyone herself she is more ruthless in thought than in action.

Don't use plagiarized sources. Get your custom essay on
“ Lady Macbeth Is More Ruthless Than Macbeth ”
Get custom paper
NEW! smart matching with writer

Macbeth acts on this encouragement therefore is the more ruthless one. The first time we hear of Macbeth in the play a captain is talking about the battle, even hear we can see Macbeth is ruthless. Macbeth is described as killing a man “Till he unseamed him from the nave to th’ chops” without any mercy or any hesitation. This shows courage but also ruthlessness, he does what he must to win the battle, which is kill his enemies.

When Lady Macbeth heard that the first prophecy had come true she was plotting the murder of Duncan straight away, I would call this ambition.

Lady Macbeth is almost portrayed as an opportunist here. She sees her chance to gain the throne, sees what must done for her to gain it and makes it happen. Lady Macbeth knows she could never kill Duncan herself she is too weak. She calls on the supernatural to help her “come, you spirits that tend on mortal thoughts, unsex me here and fill me from crown to the toe topfull of direst cruelty” this shows Lady Macbeth is ruthless is thought but not in action.

She doubts whether Macbeths has what it takes to seize the crown, she views his kindness and essential goodness as negative “it is too full o’ th’ milk of human kindness”. Macbeth is ruthless because he is the one to kill Duncan. At first Macbeth is hesitant when considering killing Duncan “who should against his murders shut the door, not bear the knife myself.” Lady Macbeth has to question has to question his man hood before he will agree to do it. “When durst you do it, then you were a man”.

Lady Macbeth never mentions anything about killing the guards Macbeth makes that decision all on his own. He does what he must to stay king and protect himself from being caught we see this constantly throughout the play. Macbeth was prepared to do something to Malcolm before he had even killed Duncan, before lady Macbeth had even spoke to him about killing “that is a step on which I must fall down or else o’er-leap for in my way it lies”. Macbeth has it arranged for his best friend and his son to be killed all for the sake of the throne, from the guards murder on Macbeth completely shuts out Lady Macbeth. He also kills macduffs family because he wouldn’t support him and feared he would try to over throw him. We see Lady Macbeth completely disappear from Macbeth life once he becomes king he is too preoccupied protecting his crown to bother with her.

When she dies he doesn’t care all he says is “she should have dies hereafter” and charges away into battle this is where we see his true ruthlessness to not even care your own wife is dead to not care who will die in battle whether it be his subjects, thanes or wife all he cares about is staying king and he will do bathing he feels necessary. Lady Macbeth pays for her ambition dearly when she is haunted by her own sleep walking her subconscious mind shows what really is going on in her mind.

Her tormenting grief is shown “yet who would have thought the old man to have so much blood in him” she torments herself over Macbeths killings “the Thank of Fife had a wife: where is she now ?” “Banquo’s buried; he cannot come out on’s grave.” this all shows she is not as ruthless as Macbeth he shows no remorse for what he has done apart from briefly after Duncan’s murder, whereas lady Macbeth is tormented by grief which eventually leads to her suicide. Macbeth is the more ruthless is the Macbeth team he does what he must to stay king he commits and plans numerous murders. Whereas Lady Macbeth encourages him to commit one muder, she is more ruthless in mind than in action. 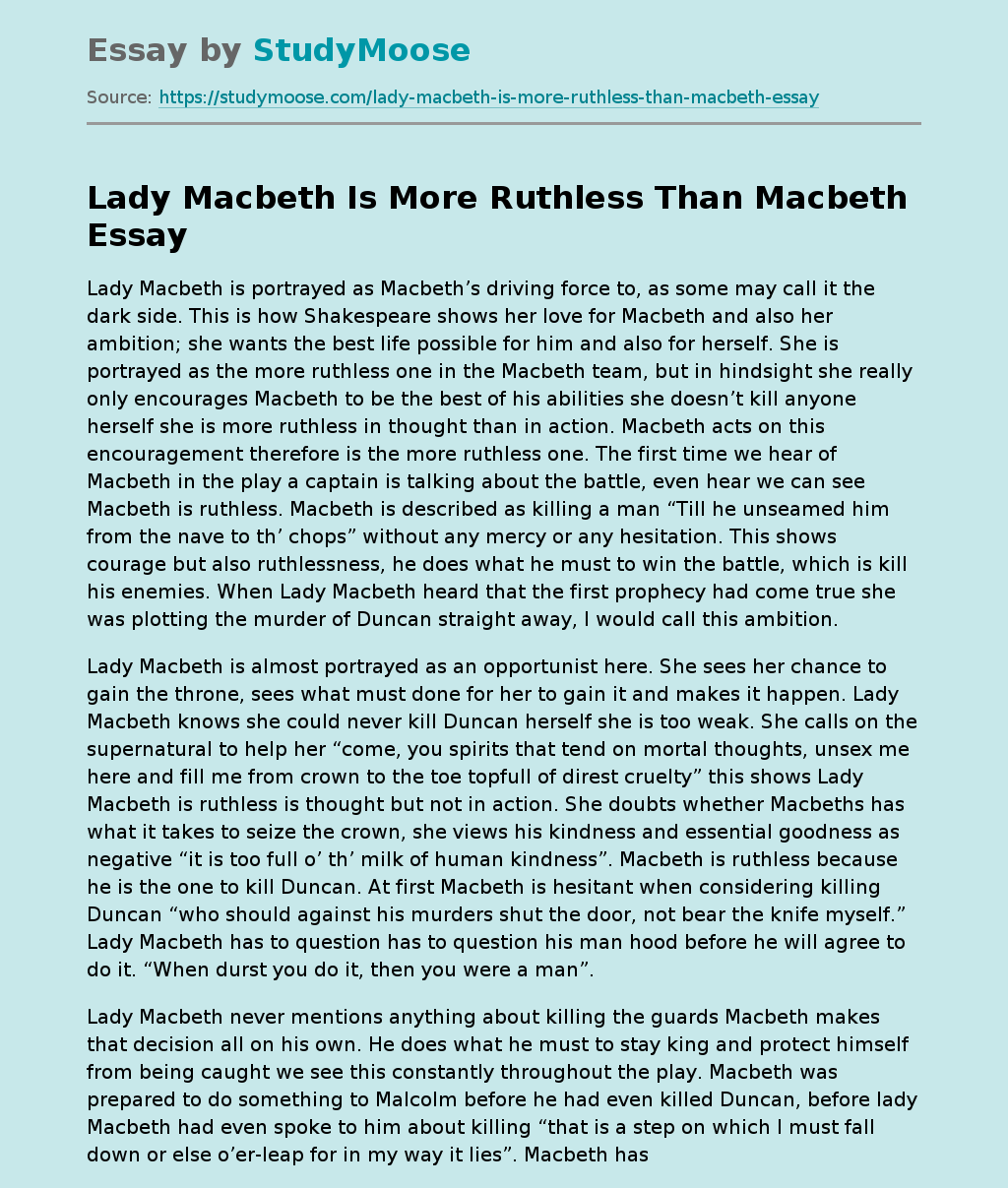