Is Macbeth responsible for his own downfall

Macbeth is completely and solely responsible for his own downfall. He lead himself to defeat by falling to his fatal flaws. Manipulation, ambition, and power got the better of him creating great inner turmoil, and bringing him to an abrupt end.

From the beginning Macbeth was able to choose his own fate. The moment when he eagerly listened to the witches and said to them “Stay, you imperfect speakers, tell me more” shows that he believed that what they are saying was of great importance to him.

Don't use plagiarized sources. Get your custom essay on
“ Is Macbeth responsible for his own downfall ”
Get custom paper
NEW! smart matching with writer

The tempting words of the witches prophecies ignited a spark of greedy ambition in him that he had not realised was there. This lead him to make his decision to follow their persuasive words so although they tempted him, it was his own ambition that drove him to commit the crimes.

Macbeth’s ambitious nature is shown many times throughout the play. Once the king had made him Thane of Cawdor and the first “and great” hurdle had been overcome, the possibility of him having crown becomes fixed in his mind.

when he hears Malcolm has been pronounced as the king heir Macbeth admits to himself that he has “Black and Deep Desires”. He finds himself battling with his conscience but when he says “I have no spur to prick the sides of my intent but only vaulting ambition, which o’erleapes itself and falls on the other” it shows that he has no reasons to kill the king except to fulfill his own ambition.

Macbeth’s overly ambitious quest for power motivates him to prematurely end the life of the current king.

Not only does Macbeth quest for power end the life of King Duncan, but he continues to murder for no reason whatsoever apart from malice. the evil tyrant that Macbeth has become is proved when he plans alone to murder Lady Macduff and her children. At this stage of the play Macbeth has lost all human compassion and empathy so he thinks nothing of murdering innocents. Had he stopped at the first murder of king Duncan he may have got away with it but his manic behaviour turns everyone against him and can ultimately only lead to his own demise.

By the end of the play it is obvious that a valiant Macbeth no longer exists. He suffered greatly from his fatal flaws: being mainly manipulability, ambition and the sense of power. Macbeth’s life comes to an abrupt end, and no one grieves him. He died a tyrant and a murderer, all through his own fault.

Is Macbeth responsible for his own downfall. (2016, Mar 17). Retrieved from https://studymoose.com/is-macbeth-responsible-for-his-own-downfall-essay 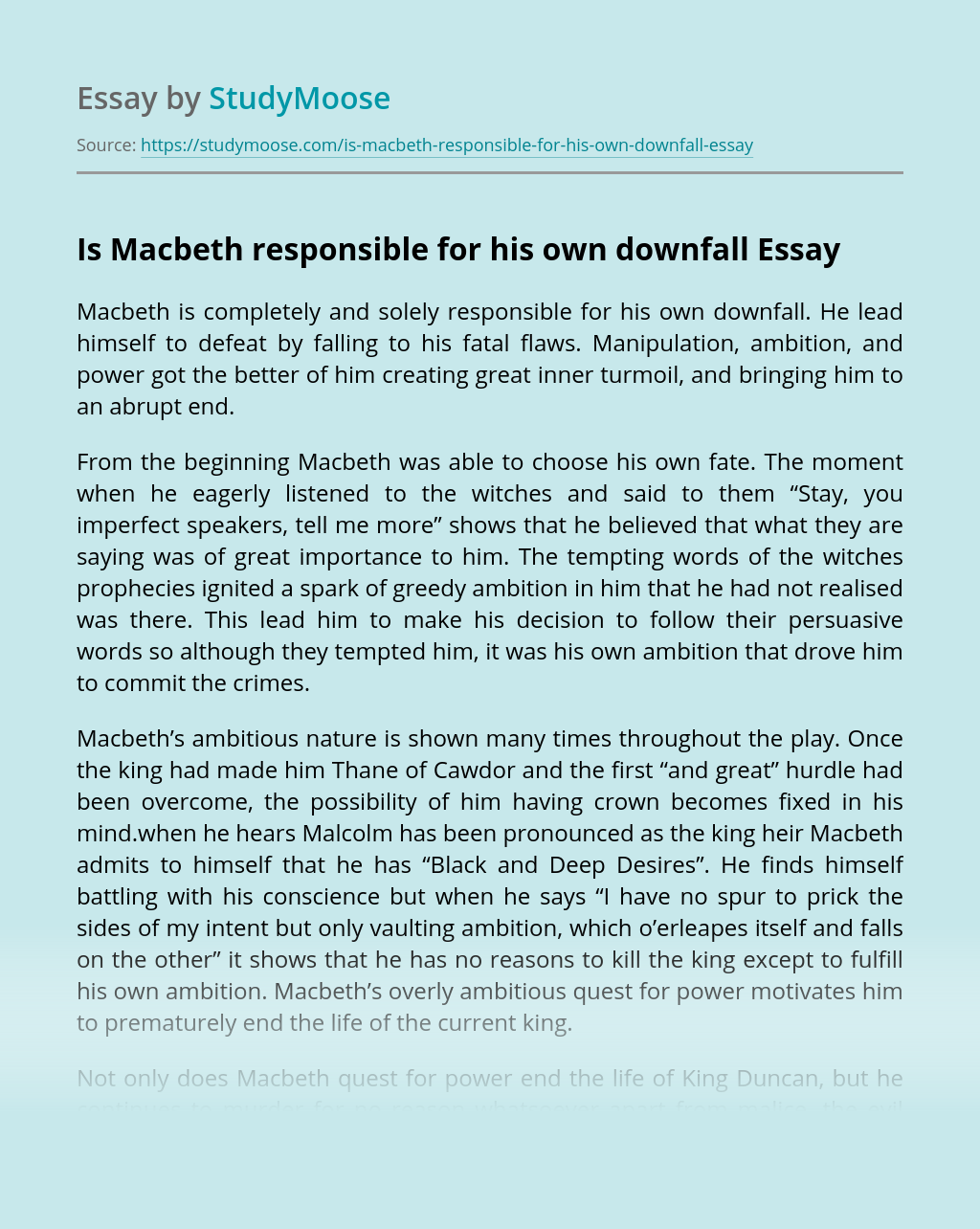