Even the bravest and noblest are manipulated by peers to perform unnecessary actions, ultimately leading them to construct their own destruction. In the play Macbeth, Shakespeare effectively demonstrates that characters are able to influence a noble war fighter, Macbeth, to cause his own downfall. Moreover, this tragedy becomes clear when the effects of the characters on Macbeth result in his poor decisions, which inevitably progresses into his downfall. Shakespeare initially presents Macbeth as an innocent character who becomes the victim of circumstance leading to a sorrowful downfall, and deserves the pity of the audience.

Don't use plagiarized sources. Get your custom essay on
“ Macbeth’s Tragic Downfall ”
Get custom paper
NEW! smart matching with writer

The cause for brave Macbeth’s downfall is due to the misleading truths which produce negative thoughts and disables his mind to distinguish the right from wrong. To begin with, Macbeth’s confusion starts by an encounter with three witches who intentionally entitle him with three prophecies, where two of them, Thane of Cawdor and King of Scotland, have not occurred. Macbeth stresses when the second prophecy comes true, and he states “two truths are told,/ [but] this supernatural soliciting/cannot be ill, cannot be good… I am Thane of Cawdor [now, if so] why do I yield to that suggestion.

” (1.3. 126-128, 133). Evidently, Macbeth debates whether the prophecy is genuine or not, because he recognizes the King is still alive and for that to become true something dreadful will happen. This creates ambition for power in naive Macbeth’s mind, demonstrating the effect of the witches. Afterwards, Macbeth informs Lady Macbeth about his encounter with the three witches and his new title as Thane of Cawdor, but Lady Macbeth begins filling negative thoughts in Macbeth’s mind for his third prophecy to be true as well.

Macbeth wants to enjoy praises about his accomplishments, but Lady Macbeth wants him to kill Duncan by telling him, “When you durst do it, then to were a man./ And to be more than what you were, you would/ be so much more than a man.”(1.7. 49-51). Lady Macbeth pressures Macbeth to conduct King Duncan’s murder by questioning his manhood, and tells him to strengthen his courage which demonstrates how Lady Macbeth is being a negative influence on Macbeth. Lady Macbeth shows an influencial character that strives for power, and she successfully manipulates Macbeth to kill the King. Lastly, after he becomes King, Macbeth recalls the witches’ prophecy where they inform him that Banquo’s children will be Kings. Banquo has doubts on Macbeth regarding the murder of King Duncan and tells him that he has everything, “now, King, Cawdor, Glamis, all,/ as the weird women promis’d, and I fear/ thou played’st most foully for’t… [but Banquo] should be the father/ of many kings …[and] may they not be my oracles as well.”(3.1. 1-3, 5-6, 9). Macbeth believes in the prophecy as much as Banquo does, and Banquo decides to take advantage of the circumstance by creating fear in Macbeth’s mind to make him cause even more destruction to maintain his title. All in all, harmless Macbeth is easily manipulated by the characters in the play resulting in a negative change in his character.

The creation of major flaws from characters becomes apparent in Macbeth as his influenced behavior leads to his Downfall in morals and life, causing the audience to feel sympathetic for Macbeth’s misguided death. Unlike the start, Macbeth’s thoughts directly lead actions, without hesitation or second thought. Macbeth confesses that, “the very firstlings of [his] heart shall be/ the firstlings of [his] hands. And even now/ to crown [his] thoughts with acts, be it thought and/ done.”(4.2. 145-148). Macbeth demonstrates a lack of value and makes selfish decisions, making the audience pity him since he has lost his moral due to other characters’ negative influence. Furthermore, Macbeth also shows a downfall in his personality after he is informed about his wife’s death. Macbeth barely changes expression upon hearing Lady Macbeth’s death, he believes, “[Lady Macbeth] should have died hereafter;/

There would have been a time for such a word.”(5.5. 16-17). This thought reveals Macbeth’s downfall through his loss of compassion, intense love, and feeling which are the qualities of a human being. The audience pities Macbeth because he completely loses his family and his qualities that make him a person. However, Shakespeare reveals his ultimate downfall in a dramatic fight scene against Macduff resulting Macbeth’s death. Macbeth feels empowered when a Apparition summoned by the witches tell Macbeth that, “none of woman born shall harm Macbeth.” (4.1. 79-80). While fighting with Macduff, Macbeth is over confident due to the Apparition’s promise and eventually takes his last breaths, this demonstrates another example that brings negative effects to Macbeth. Overall, the audience acknowledges the fact that Macbeth loses his humanity and eventually life due to the major flaws that the characters compose for Macbeth.

The most noble and heroic person at the beginning of the play Macbeth goes through a major downfall from influences and ultimately loses everything slowly, until death. The characters, Lady Macbeth, three witches, and Banquo play a significant role in misleading Macbeth to his doom. As a result, it is now visible the audience would pity Macbeth since he is ripped from his morals and his soul. It takes a little misunderstand and tragedy for even the bravest and strongest person to cause his own downfall. 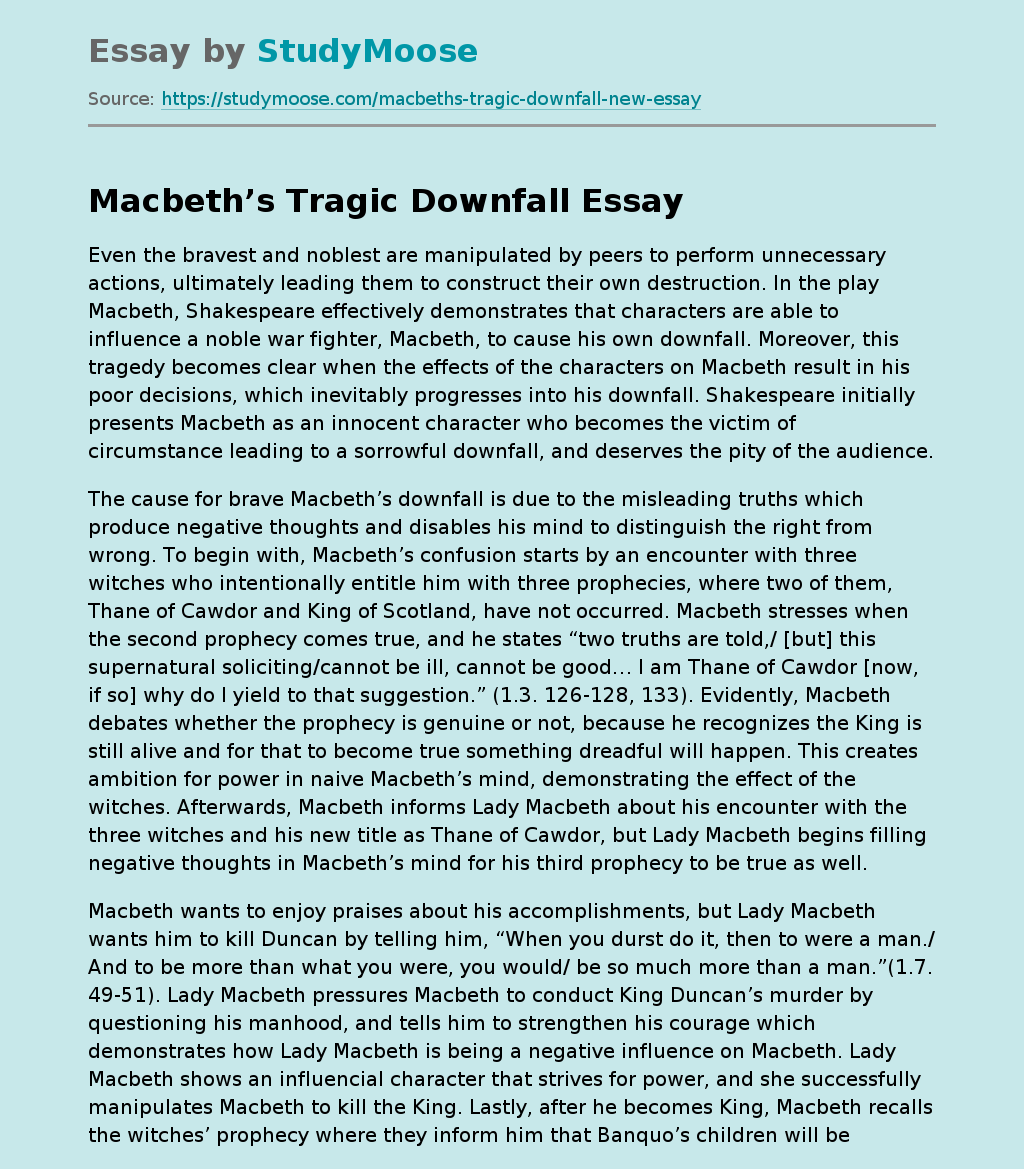