Amusement in Moral Decay in "The Importance of Being Earnest"

Queen Victoria revolutionised many aspects of everyday life for workers, middle and aristocratic classes. Victorians strived for the patriarchal structure of a family, showcasing the perfect wealth and relationships, faking their proper behaviour, morality and values, when actually they were hiding and distorting their true selves. Oscar Wild rebels against the prim and proper behaviour of upper-class society, „business“ marriages, dishonesty and mocks the whole Victorian period and the era’s followers. Using satire, he makes fun of human shortcomings and a society in which looks, and wealth are more valued than sincerity or realness.

Don't use plagiarized sources. Get your custom essay on
“ Amusement in Moral Decay in “The Importance of Being Earnest” ”
Get custom paper
NEW! smart matching with writer

Characters of the play bend their truths and drain honesty so much that the only thing left on their fancy towels are lies and pretending. What follows is an interpretation of Oscar Wilde’s characters who mistook moral for dandiness and wealth in the play The Importance of Being Earnest.

Lady Augusta Bracknell is the main embodiment of upper-class Victorian snob. She is the driving force and the decision maker behind every love plot in the story.

Bracknell takes control of everything as if she is something more than a tyrant and Oscar uses that to critique the false sense of self-worth and artificial earnestness. To criticize Bracknell’s follies Wilde uses irony and shows us that even though she had no wealth in the time of marrying, “When I married Lord Bracknell I had no fortune of any kind. But I never dreamed for a moment of allowing that to stand in my way.” (Wilde, 79), she still taps into every decision her daughter wants to make considering her love life and does not let her marry anyone else beside the men on her list.

Having money and power, and no solidarity she enforces social discrimination and proves the contempt Wilde has for Victorian social standards as he mocks it through her.

Tyraning over her daughter Gwendolen Fairfax, Lady Bracknell is trying to maintain their wealth status and as a Victorian aristocrat fears moral decay. Gwendolen is raised to self-improve but is actually just drowning in her hypocritical ideals. She prefers style over truth and sincerity and accepts every excuse and lie if she manages to get anything out of it.

In matters of grave importance, style, not sincerity is the vital thing. Mr. Worthing, what explanation can you offer to me for pretending to have a brother? Was it in order that you might have an opportunity of coming up to town to see me as often as possible? (Wilde 124)

Love is a problem for Gwendolen. She only has one condition under which she will marry someone. It is that her future husband must be named Earnest and Cecily wants the same for herself too. “GWENDOLEN and CECILY [Speaking together.] Your Christian names are still an insuperable barrier. That is all!” (Wilde 126) With the fact that both of them want to marry an Earnest but do not want their Earnests to actually be sincere, and both of the men are willing to change their names just to marry, Wilde makes a comedy out of love and the characters to mock the lack of humanity and excess of vanity and shallowness.

The men they want to marry, Algernon and Jack, constantly disrespect and tease each other, as if they already know that Jack is Algernon’s older brother. Paralleling their actions, same as he did with Cecily and Gwendolen, Wilde introduces stock characters. Male leads both have a second identity, and both are in love with a young girl and the only thing that different them is their address. They both are figures which help Wilde show us that they, together with their partners, make fun of the institution of marriage and love. They are very generous in making up and building up their poor lives so much they manage to fool everyone, including their partners.

Jack and Algernon, Gwendolen, Cecily and Lady Bracknell all have a desire for social improvement, without being aware of that that with their lies, standards and mocking they are burying themselves even deeper than they already were. Wilde sees no possible hope for this society and accentuates the way that women in that time were solemnly looking for things and people to make them look even better than they considered themselves to be. Also, fortune and family background have a major role in this play and Oscar Wilde paints the picture of a rotting Victorian society disliking both the ways and the means of that era. He wishes to expose all the dirt and morbidity in a satiric matter and succeeds at it and gives us a glance of how deceptional were the upper classes of Victorianism.

Amusement in Moral Decay in "The Importance of Being Earnest". (2021, Mar 26). Retrieved from http://studymoose.com/amusement-in-moral-decay-in-the-importance-of-being-earnest-essay 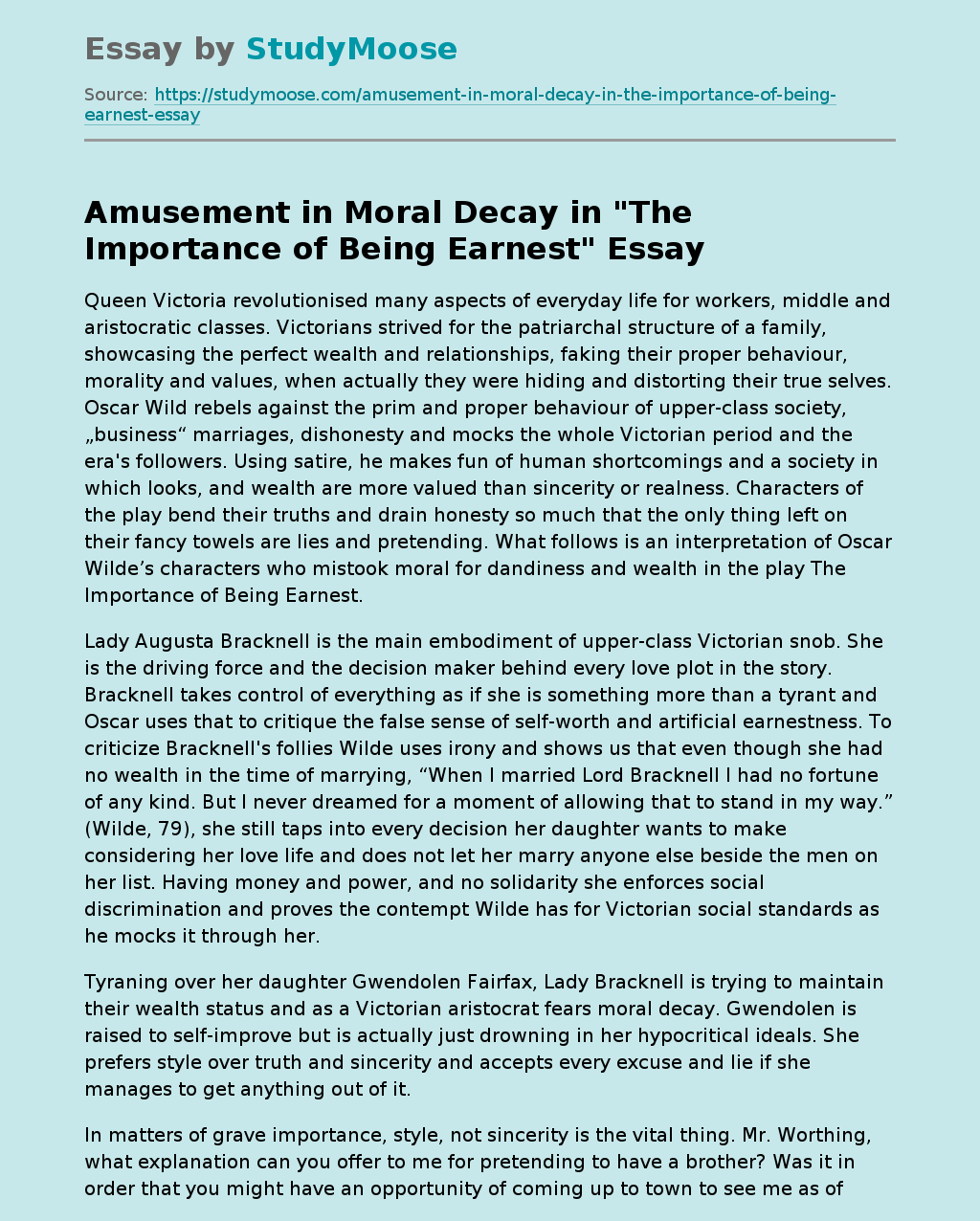