The Importance Of Being Earnest Sparknotes

However, critics mmay argue that it is likely that Wilde is not satirising the concept of marriage, as he himself was married, but in fact the upper class Victorian attitudes towards marriage with the protocol to analyse wealth, ancestors and political connections to determine the suitability of a marriage partner, as is reflected in the subtitle and Wilde’s own commentary on the play. “It has a its philosophy that we should treat all the trivial things of life seriously, and all the serious things of life with sincere studied triviality”.

Don't use plagiarized sources. Get your custom essay on
“ The Importance Of Being Earnest Sparknotes ”
Get custom paper
NEW! smart matching with writer

This is shown through Lady Bracknell’s ‘interview’ of Algernon in Act 1. Wilde ridicules the concept of marriage suitability by utilising the linguistic device of juxtaposition of her serious questions “Are your parents living? ” with the more frivolous “What number in Belgrave Square? ” Wilde evidently is undermining the gravity and importance of marriage in the eyes of the upper class as it highlights the frivolity of Victorian aristocracy attitudes towards the process of finding a marriage partner.

This is the case especially surrounding serious matters.

Wilde further insinuates Lady Bracknell views the status of Algernon’s parents, (a commonly asked question in the era of which the upper class are trying to find a suitable marriage partner) of equal importance to which number house Algernon lives in (as where he lies is in a highly regarded area of London the number should be of no concern). [b] Satire is further explored through Lady Bracknell herself who is a comic device employed by Wilde to satirise the hypocrisy and shallow moral values of the Victorian upper class society.

As a stock character from the comedy of manners, her attributes are heavily based on the stereotypical views, making her a component for parody to create humour whilst highlighting the undesirable traits of the society at the time. Wilde portrays morals as inverted in which they are trivial and something not to be taken serious –“I do not propose to undeceive him. Indeed I have never undeceived him on any question” I would consider it wrong. ” The double negation exhibits how Lady Bracknell embraces in her ever-continuing deceitfulness towards her husband.

Her flawed moral standards subvert the normal moral values of society and this is highlighted by the fact that she considers “it wrong” to be truthful. The ridiculousness in this brings humour as it exposes the absurdities of society as it satirises the upper class by suggesting they value society and its devotion to the superficiality within it. This is further explored through the language that Lady Bracknell uses; her domineering and controlling nature is depicted by the imperatives “Come here. Sit down immediately” and interrogatives “What did he die of?

” This is reinforced by the amount of economic power she holds in her social hierarchical position, to the extent that the plot surrounds Lady Bracknell (fulfilling the demands that would be typically be placed on the father) in a search to find a suitable husband for her daughter. Wilde has utilised Lady Bracknell’s androgynous characteristics to subvert gender roles at a time in which men were seen as more dominant to the extent where Lady Bracknell’s presence is so overbearing that her daughter Gwendolyn states “The home seems to me to be the proper sphere for the man.

And certainly once a man begins to neglect his domestic duties he becomes painfully effeminate, does he not? ” This is a comic reversal of the expectations that the upper class adhered to whereby the women’s role was to manage the household and in contrast the man would take all the other decisions such as politics, economics and legal affairs in fitting with the patriarchal culture of the Victorian era.

Similarly, comedy is also created through the hyperbolic extent that Lady Bracknell exceeds in utilising the power she has, which is shown through Wilde’s repetition of presenting Lady Bracknell speaking with imperatives and interrogatives through the play. It is arguable that Act 2 part 2 is the most satirical and humorous scene in the play where Gwendolyn and Cecily acquaint with each other during their ‘tea party’ as dramatic irony is used as a tool to satirise the false facade that masks their obvious disaffections for each other.

Their continuation of veiled insults, for instance regarding each other as “Dearest” adds to the comedy of the play as Wilde’s use of stylised language and the artificiality of their mannerisms fundamentally are used to parody the Victorian upper class. The whole play, underlined by the title, is about the significance placed on outward appearance and social conventions as opposed to personal qualities. Despite their negative feelings towards each other they continue to act under formal pretences.

For example, Gwendolyn stating that she wants whilst undermining the quality of Cecily’s house: “Bread and butter, please. Cake is rarely seen at the best houses nowadays. ” What amplifies the hilarity of the situation more is that previously Cecily indignantly states: “This is no time for the shallow mask of manners! ” but then she herself acts under false pretences. Wilde is using this to not only to mock the importance of appearance as opposed to the nature of something but also bring to light the importance placed on in keeping of the social rules followed by the upper class in the 1800s.

Wilde also uses the countryside and town setting in order to satirise the concept that Victorian nobility maintain different values depending on where they are; Gwendolyn states “Personally, I cannot understand how anybody manages to exist in the country, if anybody who is anybody does… ” Wilde purposely gives extremely similar characteristics between Gwendolen a ‘town girl’ and Cecily a ‘country girl’ with them both having a fixation upon the name ‘Ernest’ and falling helplessly in ‘love’, both believing that anything written down is automatically the truth (their diaries) and both prevailing upon the importance of fashion and style.

Cecily is describes as being “a sweet simple, innocent girl” and Gwendolen is depicted as “a brilliant, clever, thoroughly experienced lady” although these claims from Jack and Algernon show them to be contrasting; further exploration shows them to have more similarities than differences despite their contrast in upbringing, and what common expectations would be of a town and country girl. Wilde does this to satirise love and romance by showing the falsity and superficiality of the upper class despite being in the town or country they have the same morals, ideals and fixations.

The difference that is perceived by the different location of their upbringing/hometown is shown to be not as different as it seems. To conclude, it is fair to say that Wilde has incorporated many forms of comedy however, I believe that satire is the largest component of the play but does require the intelligence for a thorough understanding that lends the play a stylish flair. The satirical nature of the play allows Wilde to adopt this didactic tool and ridicule Victorian concepts of earnestness, marriage and morals yet using the comedy to mask his underlying social commentary and making it socially acceptable to criticise.

The Importance Of Being Earnest Sparknotes. (2020, Jun 02). Retrieved from https://studymoose.com/the-importance-of-being-earnest-3842-new-essay 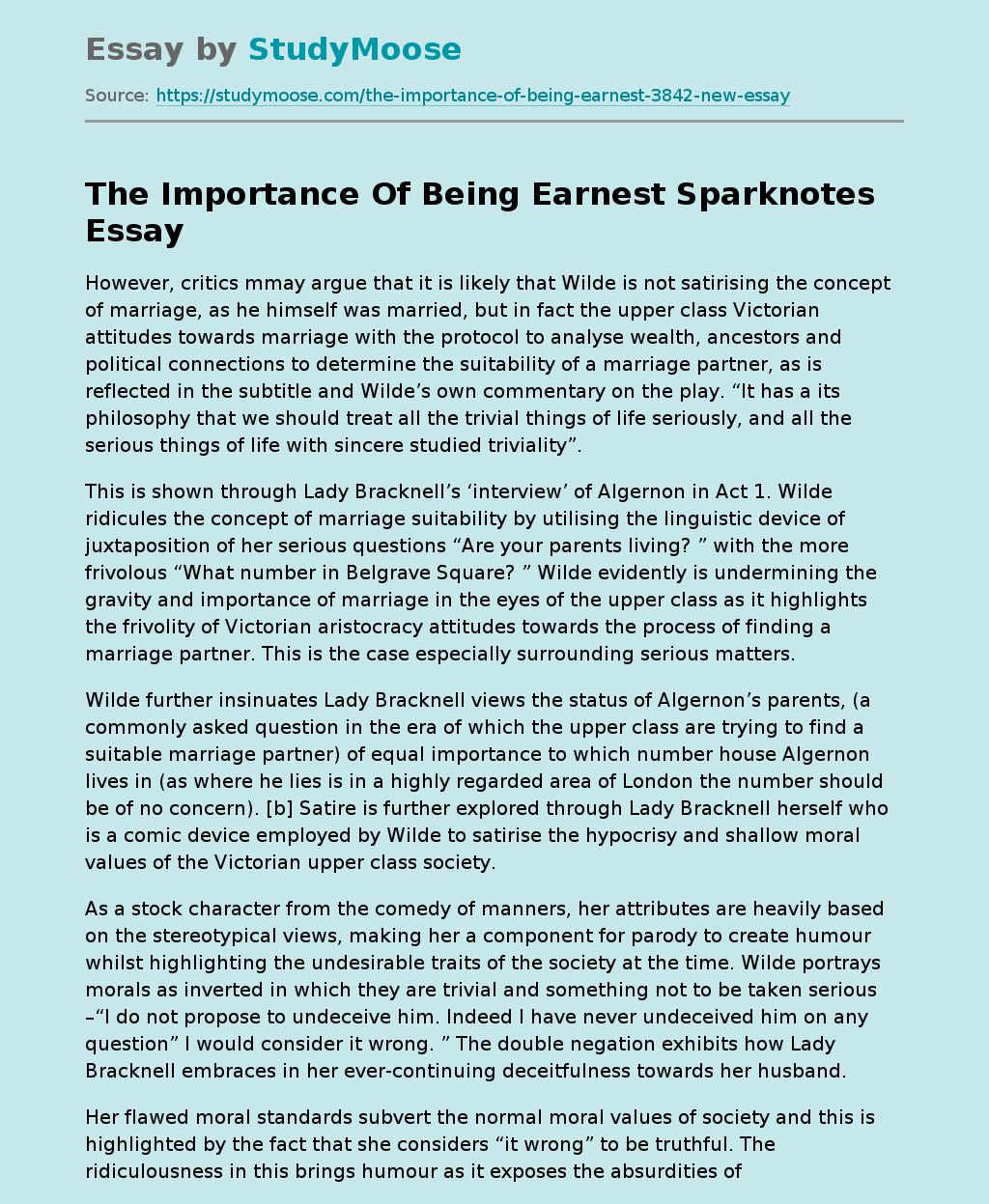