The Importance of Being Earnest: A Comedy

Oscar Wilde’s The Importance of Being Earnest takes place in the Victorian Era and follows Jack Worthing, a man who creates a fake identity named Earnest in order to escape his home life and win the heart of Gwendolyn Fairfax, an aristocrat from London. It also follows Jack’s friend Algernon Moncrieff, who later also pretends to be named Earnest in order to marry Jack’s ward Cecily Cardew. Both Gwendolen and Cecily have a silly belief that they are destined to marry a man named Earnest.

Don't use plagiarized sources. Get your custom essay on
“ The Importance of Being Earnest: A Comedy  ”
Get custom paper
NEW! smart matching with writer

Lady Bracknell, the play’s antagonist, tries to control their relationships by pointing out that an aristocrat in society must uphold their position in society through marriage. Wilde deliberately makes the characters and the conversations between them humorous and entertaining to appeal to the audience. In the Importance of Being Earnest, Oscar Wilde consistently uses humor to highlight the Victorian society’s notions on the institution of marriage. Wilde helps the audience better understand Victorian values by hilariously painting an unflattering picture of the aristocracy’s ridiculous views on marriage.

Lady Bracknell is perhaps Wilde’s most outrageous character in the play, as she tries to take control over each engagement that takes place. When Lady Bracknell is informed of Cecily’s engagement to Algernon, her response towards her is cold. She immediately begins asking probing questions such as ‘Mr. Worthing, is Miss Cardew at all connected with any of the larger railway stations in London?’ Lady Bracknell is gravely concerned about the impact that Algernon’s marriage to a woman of lower status could do to her family’s reputation.

The conversation becomes amusing when Jack informs her of Cecily’s family’s wealth and status. Lady Bracknell comically responds, ‘A moment, Mr. Worthing. A hundred and thirty thousand pounds! And in the funds! Miss Cardew seems to me a most attractive young lady, now that I look at her’ (Wilde, 1894). Lady Bracknell’s dramatic change in tone towards Cecily and Algernon’s engagement is comedic. In a matter of a few seconds, she went from disproving of Cecily to agreeing happily to the engagement purely because of her greed. She is suddenly supportive of the marriage only when she learns that Cecily comes from a respectable family with an inheritance in her name. Marriage, a typically serious topic, is discussed lightly by Lady Bracknell, who discusses several selfish reasons for marriage besides the love between two people. Wilde creates this hilarious contrast in Lady Bracknell’s attitude to reveal the Victorian era’s warped priorities regarding marriage. He creates a character with such eccentric opinions to highlight the absurdities in the mindset of aristocrats. Through Lady Bracknell’s humorous responses, she reveals her true opinions on marriage, which is marriage for wealth and social status.

Gwendolen’s standards for marriage are absurd in a way that is much different than Lady Bracknell’s. She is less concerned with wealth and status, but instead infatuated with the name Earnest. Gwendolen says to Jack, ‘The moment Algernon first mentioned to me that he had a friend called Ernest, I knew I was destined to love you.’ In this line, Gwendolen tells him that just his name was enough for her to fall in love with him. Their conversation becomes even more humorous when Jack asks her what she thinks of the name Jack. She responds, ‘Jack? . . . No, there is very little music in the name Jack, if any at all, indeed. It does not thrill. It produces absolutely no vibrations . . . I have known several Jacks, and they all, without exception, were more than usually plain’ (Wilde, 1894). The pure irony of her saying she never wants to marry a man named Jack, when she is in love with a man whose real name is Jack, is Wilde’s way of poking fun at the silly nature behind her thoughts. The utter ridiculousness of what Gwendolen says emphasizes Victorian society’s skewed views on marriage. Her concept of love and marriage revolves around a name, instead of their actual personality and compatibility together. The way she speaks about always wanting to marry a man named Earnest is comical and humorous because there’s no logic behind her reasoning. Someone’s name itself shouldn’t matter for a commitment as important as Marriage. Wilde uses this ironic and funny interaction to point out how skewed Victorian society’s requirements for marriage are.

In The Importance of Being Earnest, Oscar Wilde presents a very humorous approach to commenting on the ideals of marriage in Victorian society. The title of the play itself is satire, as the two people who go by the name of Earnest are far from being Earnest until the end of the play. Wilde creates the most preposterous characters, such as Lady Bracknell, to exaggerate the importance of money and reputation to aristocrats in Victorian society. The conversations between the characters are ironic, and point out their skewed requirements for love and marriage. Through Wilde’s use of comedy in the play, he was able to comment on Victorian society’s beliefs about marriage in a light and entertaining manner, ridiculing them for prioritizing names, wealth, and reputation before love.

The Importance of Being Earnest: A Comedy . (2021, Mar 26). Retrieved from http://studymoose.com/the-importance-of-being-earnest-a-comedy-essay 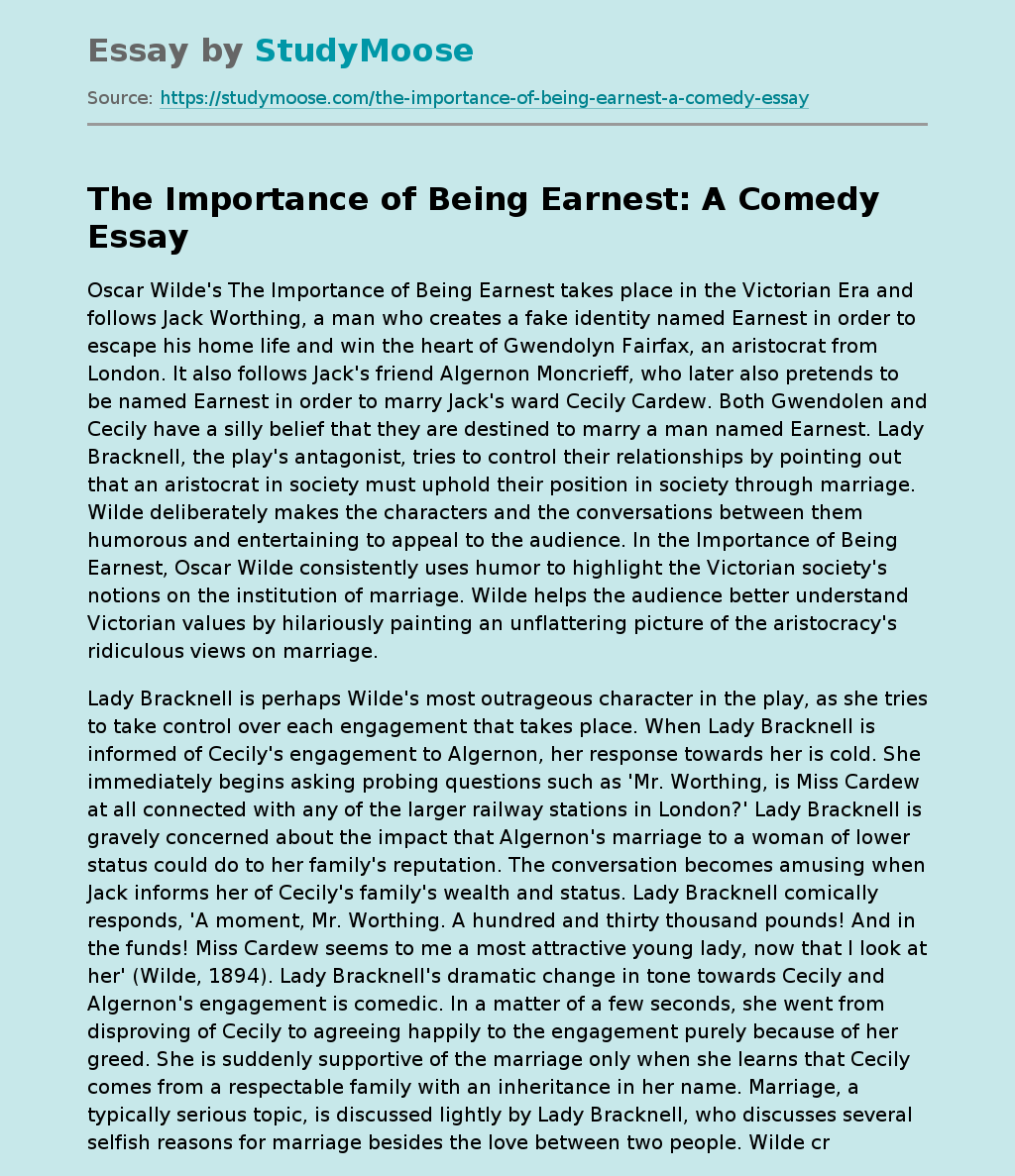