"The Importance of Being Earnest" Literary Analysis

The play “The Importance of Being Earnest” is a brilliant satirical work by Oscar Wilde that highlights the hypocrisy of Victorian morals and priorities.

In Act 1 most of the main characters (Jack Worthing, Algernon Moncrieff, Lady Bracknell, Gwendolen Fairfax) are introduced to the story, along with major conflicts between them and a major plot point: Jack and Algernon’s bunyburing, which is the practice of creating a fictitious relation who lives elsewhere with the intention to use them as an excuse to leave one’s current situation and do something more pleasant and entertaining.

Don't use plagiarized sources. Get your custom essay on
“ “The Importance of Being Earnest” Literary Analysis  ”
Get custom paper
NEW! smart matching with writer

Jack invented the persona of Ernest for his stay in town and uses his real name, Jack, in the country, while Algernon invented his ill friend Bunbury so he could escape to the country. At the beginning of the Act, in Algernon’s apartment, Algernon and Lane, his manservant, are chatting when Jack enters and replaces Lane. He and Algernon have a disagreement about Jack’s cigarette box, which is under the name Jack.

Through this, Algernon finds out about Jack’s deception and reveals his own. Jack tells Algernon of his plan to propose to Miss Fairfax, and just after that Lady Bracknell and Gwendolen enter. Algernon and Lady Bracknell go to the music room, leaving Jack and Gwendolen alone together. When they are alone, Jack proposes, and Gwendolen accepts, telling him of her fantasy to marry a man named Ernest, as “It has a music of its own… The only really safe name is Ernest (Wilde, p 19-20).

” Once Lady Bracknell returns and hears about the proposal, she interrogates Jack about his beliefs and lineage. He reveals that he did not know his parents, as he was found in a handbag in a train station cloak room by Thomas Cardew, who gave Jack his last name from a train ticket to Worthing. Gwendolen feared that Lady Bracknell would not let them wed, but she promised that her love for him will never die; Lady Bracknell and Gwendolen leave after a few pithy remarks. Feeling guilty about lying to Gwendolen about his name when they are about to be married, Jack consults Algernon on how to best kill Jack’s fake brother off; they agree that he should die of a severe chill and be buried in Paris. The act ends with Jack marveling at Algernon’s nonsense.

The rest of the main characters are introduced in Act 2 (Cecily Cardew, Miss Prism, and Reverend Canon Chasuble). In the gardens of Mr. Worthing’s country manor, Miss Prism tries to teach Cecily her German lesson, but Cecily believes that her German lessons make her “look quite plain (Wilde, p 33).” The two of them get off topic and are discussing the importance of keeping a diary when Rev. Chasuble enters. Seeing the perfect opportunity to get the two of them together alone, as they are clearly interested in each other, and she convinces them to take a walk through the garden. After they leave, Algernon, posing as Jack’s fabricated brother, Ernest, enters. Cecily is eager (and anxiously hesitant) to meet him and discuss “Ernest’s” wickedness and need for reform in the house. While they flirt, Miss Prism and Chasuble return, and not finding her where she was, they panic. While they plan a search and rescue party, Jack arrives dressed in mourning clothes. He recites the story that Algernon and he came up with about Ernest’s death, and Chasuble extends his funeral services. Instead, Jack asks to be christened at half past five. Subsequently, Cecily returns from the house to announce “Ernest’s” arrival. Naturally, Jack is baffled. However, he is less so when he sees Algernon in place of his contrived brother, and Jack rejects the offered handshake. There is a humorous moment where Jack keeps ordering a dog cart for Algernon, and Algernon finds a way to evade getting into it. With a bit more flattery and flirting, Algernon abruptly proposes to Cecily, and she accepts. According to her diary fantasy, they were already engaged, and had sent several love letters to each other, which were all penned by her. She also confesses her dream of marrying a man named Ernest, which understandably distresses Algernon. He suddenly has an urgent need to be christened, and hastily flees to find Chasuble.

The third act shows the two sides of Jack’s life meeting, namely Gwendolen and Cecily; Miss Fairfax entered to visit Mr. Worthing. They take an immediate shine to each other. Gwendolen soon finds out that Mr. Worthing is Cecily’s guardian, and she is hurt that Ernest did not tell her this. Confused, Cecily informs her that Jack, not Ernest is her guardian, but Ernest, who is in reality Algernon, is going to be her husband. Gwendolen is instantly furious, and challenges that claim with her own proposal to Ernest (actually Jack). Cecily implies that Ernest discarded her in favor of Cecily, and the two are nearly at blows and hair pulling, though they hide it behind clenched smiles when it is time for tea. Breaking up the saccharine quarrel, Jack and Algernon enter, one after the other, and are questioned by their betrotheds about who is really engaged to whom. Upon hearing satisfactory answers, Cecily notifies Gwendolen that her supposed Ernest is really Jack, and Gwendolen informs Cecily that her supposed Ernest is Algernon. They are both dismayed at the revelation of their fiancé’s names, and glare at them as the two women storm back into the house. In their absence, Jack and Algernon start blaming each other for the deception, when in reality, both of them are at fault. They bicker and spitefully eat muffins at each other as the act ends.

In the final and fourth act, Cecily and Gwendolen are watching their fiancés from the house and wondering why they have not followed them in, until Jack and Algernon start coming towards them, at which point Gwendolen and Cecily are miffed at their forwardness. They try to give the men the silent treatment, but this attempt does not last long. Both question their intendeds on why they needed their falsified identities, and they were given the same answer; to see their loves. Embraces ensue, and now the only barrier to true love is the fact that neither of them are named Ernest. Both men respond in unison that they are to be christened, and they discover that their appointments are only a quarter hour apart. Lady Bracknell enters, and the jubilant mood is immediately killed. When Gwendolen reveals her engagement with Jack, Lady Bracknell forbids any fraternizing between them, and she turns to Algernon for an explanation of his presence there and just who is holding his hand. Algernon stammers out that his friend Bunbury exploded, and the accused hand-holder is his fiancé, Cecily. Furious, she demands that Gwendolen leave with her, but stops to inquire about a possible fortune of Cecily’s. Upon hearing the sizable 130 thousand pounds and noticing her beauty, Lady Bracknell consents to the marriage. Not so fast though, as Cecily’s legal guardian, Jack maintains his right to deny the marriage. Lady Bracknell and he argue about its validity, and he bargains with her; Gwendolen and my marriage for Cecily and Algernon’s. Lady Bracknell refuses. During this tense moment, Rev Chasuble enters to tell the two men that their christenings are ready. Desolately, Jack cancels them, as their marriages have been as well. When Chasuble mentions Miss Prism, Lady Bracknell recognizes her name and asks for her. Terrified, Miss Prism recognizes Lady Bracknell’s face. Lady Bracknell reveals that Miss Prism was in charge of her infant nephew, and vehemently demands to know what happened to the baby. Ashamedly, Miss Prism admits to mixing up the contents of the baby stroller and her handbag. Jack focuses upon hearing of the handbag, and intently asks her where she left the handbag. He runs to his room and retrieves the handbag he was found in as a baby, and the bags are one and the same! Overcome with joy, Jack hugs his newly discovered brother and reintroduces him to every person in the room as such. However, there is still the issue of his real name. All Jack knows is that he was named after his dad, but no one can remember General Moncrieff’s first name. After a frantic search, they find it in an Army List: Ernest John. Gwendolen is ecstatic at the news that she will marry a man named Ernest, and all couples run into each other’s arms. In the very last line, Wilde crafts a witty pun, spoken by Jack in response to Lady Bracknell’s negative vibes, “I’ve now realised for the first time in my life the vital Importance of Being Earnest (Wilde, p 93).”

That confrontation between Lady Bracknell, Jack, Algernon, Cecily, and Gwendolen is the climax of the play; all secrets had to come out into the open. Jack and Algernon must admit the truth about their bunburying, Lady Bracknell must learn of the engagements, and Jack has to finally understand his lineage

The Importance of Being Earnest was not pleasant read as a book, as it was very heavy on dialogue (as most plays are), which can make things like setting confusing to keep track of. It is difficult to see where Wilde’s satire stops and where unintentional error begins, as seen in Wilde’s excessive use of paradoxical epithets, such as “divorces are made in heaven (Wilde, p 9).” It adds to both his brilliant satire and the inevitable confusion of the reader.

In reference to scripture, there is very little morality to speak of; the main characters’ lives are led by lies and manipulation. The entire premise of the story is based on deceit and baseless priorities. Both of the main love interests ignore suitable options in favor of a name because of its similarities to a desirable adjective. Thankfully, the play shows the detriment of both of these faults.

"The Importance of Being Earnest" Literary Analysis . (2021, Mar 26). Retrieved from https://studymoose.com/the-importance-of-being-earnest-literary-analysis-essay 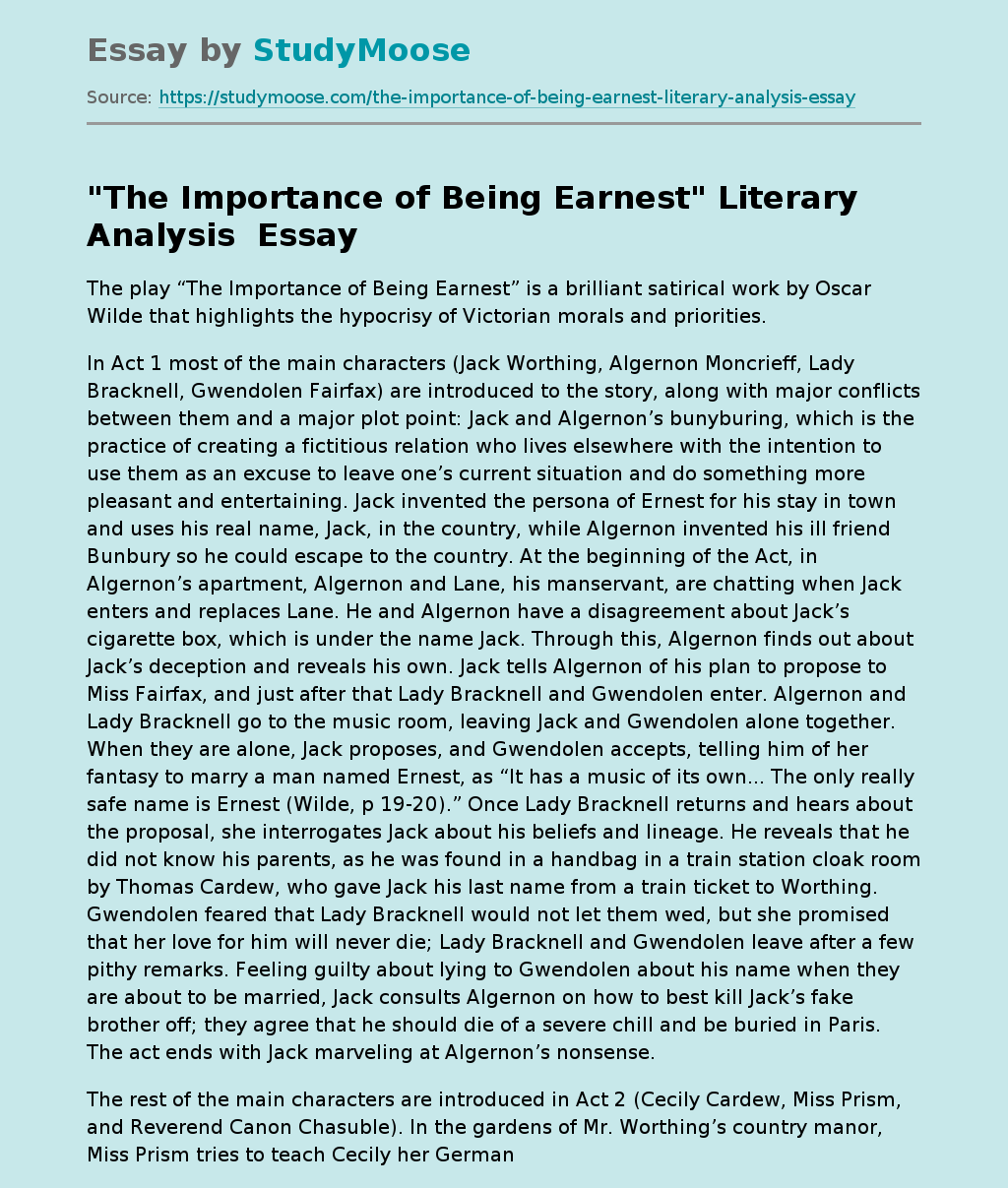