To describe the walking dead all of the following apply: soulless, insatiable hunger, actions based purely on instinct; these qualities combined, with or without the rotting flesh, make a zombie but also can be readily applied to the main character of The Picture of Dorian Gray by Oscar Wilde. The novel analyzes the value of beauty and pleasure and poses a very interesting contradiction between the traditional views of morality and quality of life. Dorian, an aesthetic young man, is tempted into vice, thus selling his soul for eternal beauty.

Don't use plagiarized sources. Get your custom essay on
“ Literary Analysis of Dorian Gray ”
Get custom paper
NEW! smart matching with writer

In the late 19th century, Saul Kripke: a philosopher, proposed the idea of philosophical zombies. His theory proposed a creature visually and behaviorally the same as a human being that lacks qualia, soul and sentience (Kirk 2). While it is easy for readers to simply write Dorian’s worsening acts of societally rejected behaviors as immoral, it can be argued that the protagonist had no concept of morals to begin with, and thus learns the public’s immoral as moral and vice versa.

In the preface of the novel, Wilde asserts that “There is no such thing as a moral or immoral book. Books are well written, or badly written. That is all” (3).

This is a statement that is good to be kept in mind when analyzing the main character’s actions. Subtly, through a number of literary devices – namely characterization, archetypes, and motifs – Wilde forces the reader to experience life in all its glory as well as shame through a zombie’s eyes.

To properly analyze the character of Dorian Gray it must first be understood that there is a distinct difference between someone who lacks morals and someone that is immoral; the first is deficient in the qualia that give the concepts of right or wrong, and the second is someone who knows the difference and chooses to act immorally. Dorian Gray is the prior. Upon meeting Dorian, Lord Henry immediately observes “All the candour of youth was there, as well as all youth’s passionate purity. One felt that he had kept himself unspotted from the world. No wonder Basil Hallward worshipped him” (Wilde 17), the most important word being purity.

Dorian does not have a sense of right or wrong at the beginning of the novel because he simply looks onto the world. It is not reflected on him in anyway because Dorian is, in short, in capable of perceiving on his own, lacking the sentience to do so. He simply does, drifting from (presumably) male figure to male figure seeking some sort of attention and guidance; he does not act, he only responds to the world around him. Basil Hallward, a painter, admires Dorian for his beauty – but it is neither the scarlet lips nor the golden hair that attracts him but rather the blankness of his soul, and that is the first hint that our protagonist is, in fact, as zombie. Basil tells Lord Henry, “Dorian Gray is to me simply a motive in art. You might see nothing in him. I see everything in him. He is never more present in my work than when no image of him is there” (Wilde 13). Henry will see nothing because nothing is present. He is a walking piece of art, thoughtless, though responding as human might and that is what attracts both Basil Hallward and Lord Henry to Dorian like moths to light. His personality is something that cannot be comprehended by either man, because it lacks the components of personality to begin with.

However, as all great novels require a plot, Henry seeks to color the boy’s snow white mind with qualia of the darkest shades, and while doing so, readers begin notice the distinct difference between Dorian and his human friends. This novel is full of archetypes. From inanimate ones, such as the winding staircase in Dorian’s home that represents the journey of life or the tower in which the protagonist hides his decaying portrait that represents the depth of the human soul, to living archetypes, such as Basil Hallward who illustrates Victorian morals and Lord Henry who is the direct opposition. Meanwhile, Dorian simply is. He sits between two extremes, Basil, who believes people are intrinsically kind and, Henry, who believes that all people live their lives abstaining from sin until they inevitably give in. Constantly, their views of right and wrong are imposed on him, ultimately confusing him. His original close friend cautions him from living the way Henry tells him to, but the artist did not impose his own qualia on him from the start.

The first views Dorian internalizes are from Henry, the very same man who believes that “experience holds no ethical value” (Wilde 54) and, “[likes] persons with no principles most of all” (11). Lord Henry detaches himself from feelings, preferring to be an observer of the limitations of human beings. He tries to see just how much black paint he can smear across Basil’s blank canvas of a boy, symbolizing the battle of good and evil – an external conscience rather than an internal one. In the end, Dorian is smeared from head to toe in what society views as sin, solidified when he takes Basil’s life. At this point, he has live thirty-eight years, with roughly eighteen of them being influenced by hedonism. Dorian takes those ideas and develops a sense of right and wrong, beauty being the basis for his moral code. The color white is a motif that is repeated throughout the text, from Basil’s first description of Dorian (Wilde 4) to his final plea, “Though your sins be scarlet, […] I will make them white as snow” (140). It is Basil’s love (the running source of homoeroticism in the novel) for Dorian that leads him to appeal for his life one more, but god does not fit into Dorian’s personal view of morality.

Pleasures of the flesh, good times and aesthetics are the basis of his virtue and love – a weak and vulnerable emotion, is a dastardly sin. He kills Basil, staining his hands for the first time with real blood. Later he muses on how if it had been Basil, not Lord Henry, who had imposed his views on his blank self that his life may have gone differently, but he does not dwell. He gets rid of the body and continues as though it is nothing at all, because murder does not fall under his perception of immoral. Dorian has a gift, or a curse, to be indifferent to the world once his soul is lost, lord Henry’s views being the qualia he internalizes before selling his soul. He does not age, he does not feel – he thrives off of physical stimuli, namely opium and sex, and the pretty things in life alone. When struck, he cries out, when frustrated, he complains – Dorian Gray functions like a human being, but unlike his friends, the ways of the world do not affect him on an emotional level; forever young, forever beautiful, life is a series of physical responses to outside stimulus, none of it truly being internalized.

Oscar Wilde was known to be a man that challenged the conventions of Victorian society. He never goes into detail about the unscrupulous things that Dorian does throughout the text, and this literary decision spares the readers of sensibilities but also illustrates Dorian’s lack of cognizance. If anything, the protagonist simply records life, rather than earnestly feeling anything at all. Given that he is the opposite of a rotting corpse, Dorian Gray still exists as a zombie: a creature lacking qualia, sentience, and a soul, and Wilde illuminates this very interesting condition through his use of characterization, motifs and symbolic archetypes. The great playwright reminds readers beginning the novel, “There is no such thing as a moral or an immoral book. Books are well written, or poorly written. That is all” (4), and the same is true of the book’s protagonist. He is not immoral, but rather lacking in morals, borrowing the ideas of Lord Henry before ultimately giving up on functioning without the ability to feel. Through Dorian’s naïve treading of what is generally accepted as immoral waters, Wilde contests society with many bold statements, challenging the reader to read the pages without bias. A zombie in a human’s world, Dorian ultimately succumbs to stress, but not without painting a beautiful allegory that has stood the test of time. 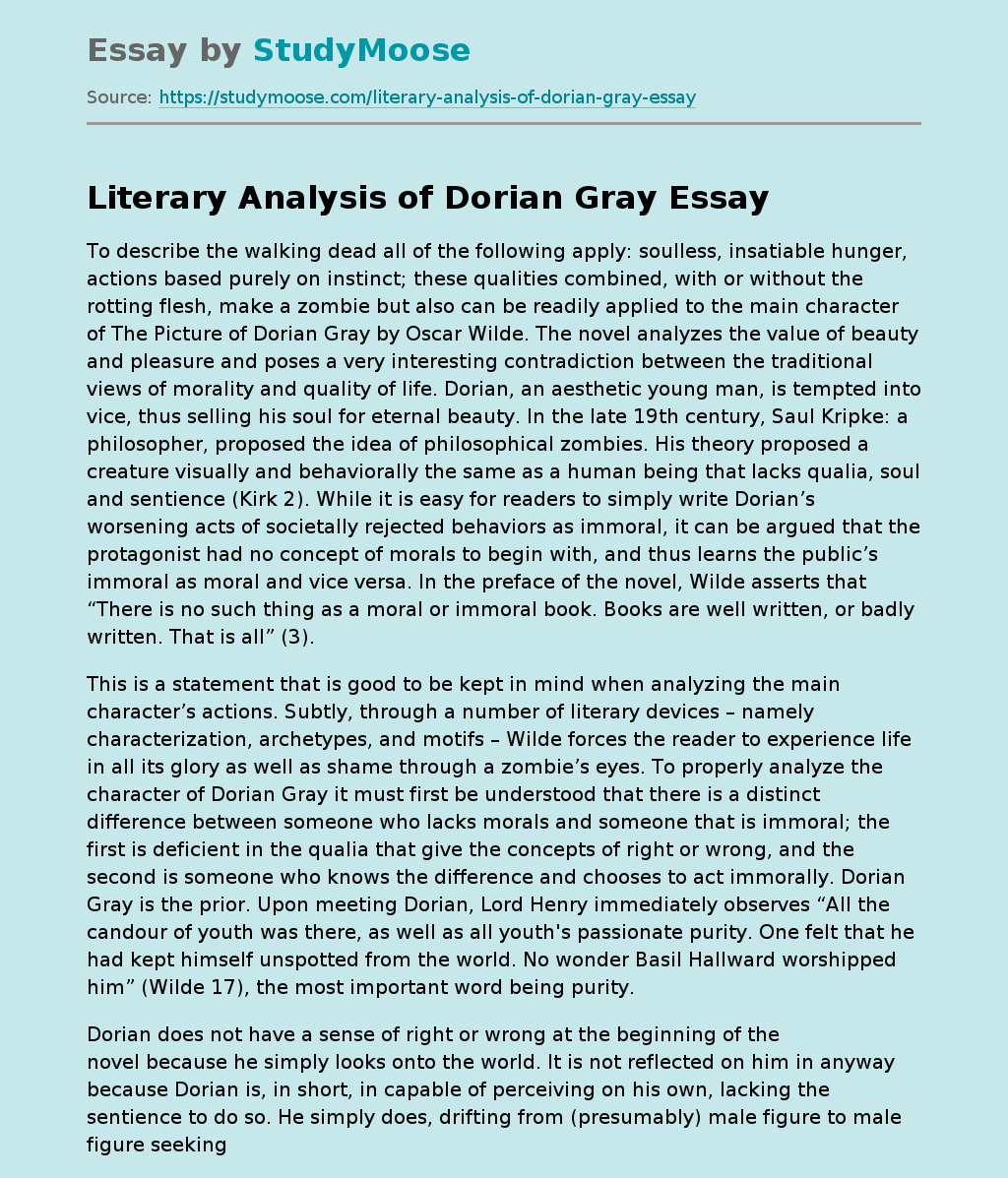