"The Importance of Being Earnest" and "The Picture of Dorian Gray"

To an extent, this statement can be agreed with and disagreed with in both texts, as both have elements of underwriting and insignificance within the female characters.

Don't use plagiarized sources. Get your custom essay on
“ “The Importance of Being Earnest” and “The Picture of Dorian Gray” ”
Get custom paper
NEW! smart matching with writer

. However, we see the subversion of this statement more in The Importance of Being Earnest due to Lady Bracknell’s strong female presence and her dominance over the two main male characters Jack and Algernon. Through the different genres of the texts we are able to establish the differences in presentation of the female characters. In The Importance of Being Earnest, all characters are over exaggerated and the comedic genre and farcical tone allows the women to flourish throughout the text as a whole. However, the gothic tropes of The Picture of Dorian Gray, means the female characters are underwritten as it stays truer to the Victorian values present at the time of publication, e.g women being under represented in the workplace and in popular culture. The gothic nature is darker and more sinister and represent the Victorian ideals at the time of publication, therefore showing women to be weaker and fickle minded.

A point where we can see the contrast and where we can evaluate the significance of female characters is through rejection. For example, in The Picture of Dorian Gray, Dorian’s rejection of Sibyl Vane allows her to act as a catalyst for the inevitable downfall of Dorian’s character, thus showing her significance as a character and her significance to the story as a whole. However, through this rejection, we also see how Sibyl is underwritten and an insignificant character as the rejection from Dorian allows us to see her lack of depth as a female character as she quickly commits suicide after the encounter.

This suicide establishes her as an underwritten character and presents her as shallow, fickle and a hopeless romantic.

We see when Dorian first learns of Sibyl’s death ‘a cry of pain broke from the lad’s lips,’ this sudden outburst shows the final remnants of Dorian’s fading morality, something we would not be able to recognise without Sibyl and her actions. However, two pages later Dorian begins to demonstrate his growing narcissism when he states that ‘She had no right to kill herself. It was selfish of her.’ Dorian believing this shows that females at the time were only used for male gain and supports the argument that they are insignificant. Her death allows us to see the underwriting and insignificance of the female characters as even Dorian, in his grief refers to her as ‘shallow.’ This contrasts to The Importance of Being Earnest, where through Gwendolen and Cecily’s rejection of Jack and Algernon, we are able to see a noticeable change in Jack and Algernon’s behaviour toward the female characters and due to the over exaggerated nature of the genre, Cecily and Gwendolen have more agency and are able to reject the men, whereas Sibyl is the passive victim, is docile and does what Dorian says.

Cecily and Gwendolen, although they have the ability and independency to reject, unlike Sibyl, they inevitably fall into the stereotypical role of the passive woman as they end up taking Jack and Algernon back almost immediately after they apologise. This demonstrates the underwriting of their characters as they ultimately subvert back to their gender stereotype of the shallow woman. However, throughout this rejection both female characters create conflict in a comical way. Gabi Reigh states that ‘It is the female characters who could be more accurately described as the doers, the active forces which set the play in motion’ and here we can agree with this statement, for without the reaction both Cecily and Gwendolen had to their rejection we would not have the resolution of the entirely.

Pursuing this further, in The Importance of Being Earnest, Lady Bracknell’s character subverts the statement entirely and the ideas of the time of woman being the lesser gender. Throughout the play she is a dominating figure head and asserts her power accordingly over Jack and Algernon. Throughout her interrogation of Jack in Act One, gender roles are flipped and subverted, as normally it would have been the father asking about marriage, however Lady Bracknell has taken on this role and this creates the dynamic of Jack as the submissive male and Lady Bracknell as the dominating female, contrasting the Victorian ideals at the time of publishing. Although, we can still see elements of patriarchal ideas as it is made clear to the audience that Lady Bracknell is only interested in money when marrying off Gwendolen.

For example she asks Jack questions such as ‘What is your income?’ And stating that Jacks house in ‘Belgrave Square’ is the ‘unfashionable side.’ This shows her character as shallow and money driven, however, we could also assume that this is not Wilde satirising females but satirising the upper class as a whole. Chris Sandford argues that Lady Bracknell is ‘born directly out of Wilde’s desires to create a perfect comedy of the upper classes,’ this furthers the idea that Lady Bracknell is far from underwritten or insignificant for her satire is not that of women but of the upper class as a whole. Lady Bracknell possess a certain complexity that allows ideas and opinions to be discussed regarding politics and the upper class, whilst still remaining a strong and comical female character.

However, it is also through her lack of questions and direct speech throughout the play which establishes her as a strong and powerful female character. Her subversion of the stereotypical gender roles allows us to see her as a well thought out and complex female character, both showing compassion at the end of the play, and strength and driving determination throughout most of the text. This contrasts the similar character of Lady Narborough in The Picture of Dorian Gray, who would be of similar social status and class. Through Lady Narborough’s dialogue in Chapter 15 of the novel, we see her presented as a shallow and self-centred character as many of the female characters are in The Picture of Dorian Gray. Her mocking of Madame de Ferrol allows Wilde to establish her as a fickle character.

Throughout this specific encounter in Chapter 15, there is a lack of free indirect style which is prevalent throughout the rest of the novel. This means that Lady Narborough’s character is not able to completely flourish as it is difficult to see her inner thoughts, unlike the male characters in the novel. This lack of literary technique shows how she is underwritten, as the failure to project her inner monologue, shows Wilde’s disregard for not just Lady Narborough, but the female characters in The Picture of Dorian Gray as a whole. This is a contrast with The Importance of Being Earnest as the style the text is written in allows all thoughts of both male and female characters to be projected through dialogue and therefore means that it would be difficult to underwrite any character. This again shows how the texts different genres and styles allow for the female characters to be written differently. Another way in which Wilde underwrites the female characters in The Picture of Dorian Gray is through thire lack of substance within their dialogue.

"The Importance of Being Earnest" and "The Picture of Dorian Gray". (2016, Aug 25). Retrieved from https://studymoose.com/the-importance-of-being-earnest-and-the-picture-of-dorian-gray-essay 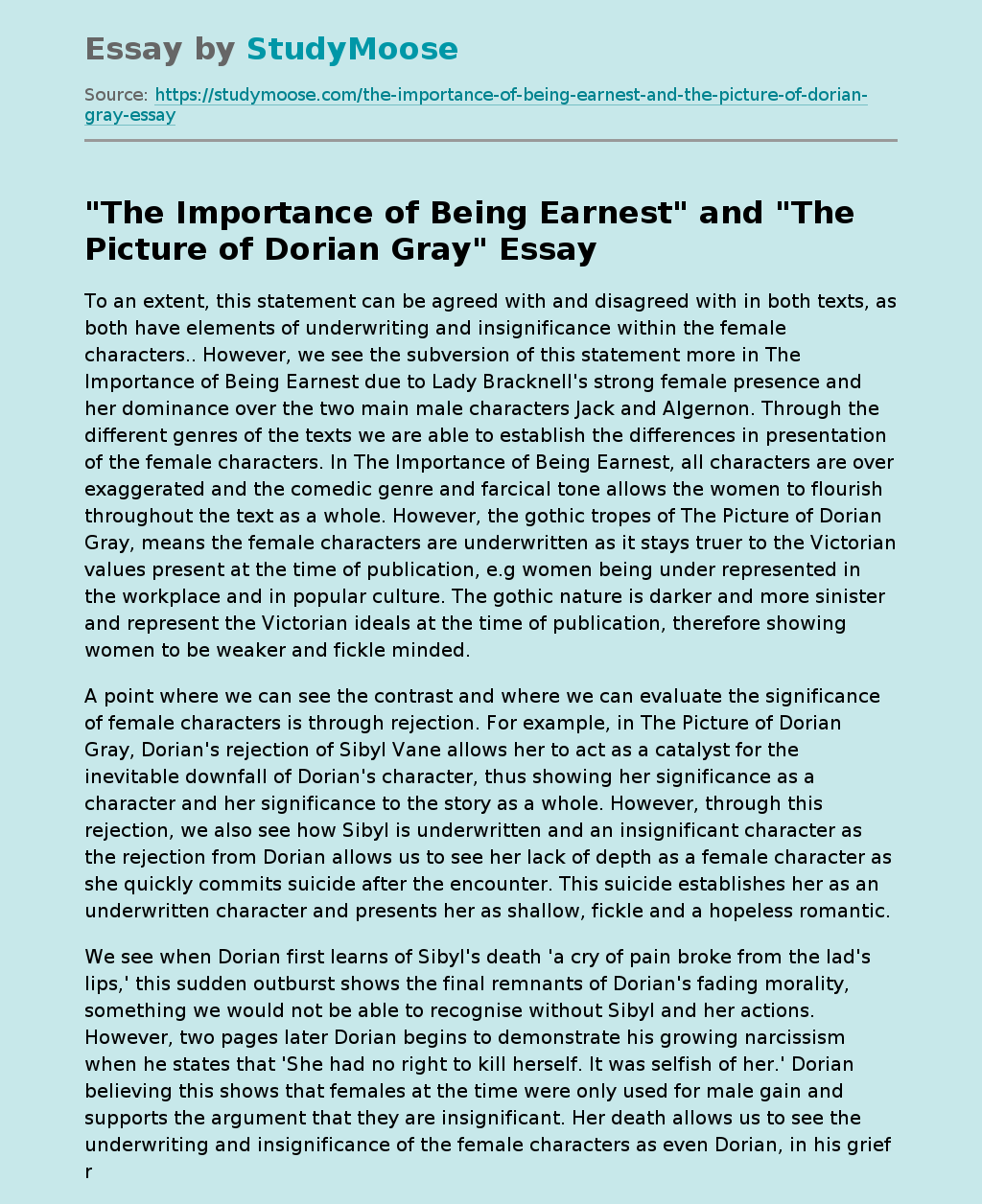