One dictionary defines Innocence as ‘Freedom from sin, moral wrong, or guilt through lack of knowledge of evil. ’ Thus innocence is the state wherein one is, in a sense, pure; free from doubt and dread and woe, unmarred by sorrow or the countless ills running rampant in the world. Innocence is associated with children and animals and nature. But for growth to occur, Innocence must be slain in order for Experience to flourish. This bittersweet transition from child to adult is the natural course of life: one cannot stay innocent forever.

Don't use plagiarized sources. Get your custom essay on
“ Innocence and Hostility in Romeo and Juliet and Of Mice and Men ”
Get custom paper
NEW! smart matching with writer

Oftentimes, this transition from innocent child to experienced adult occurs in the face of hostility, as in Shakespeare’s Romeo and Juliet, where the young lovers, to combat the hatred their families have for one another, sacrifice their love, their innocence, and their lives. This theme exists as well in Steinbeck’s Of Mice and Men, where George kills Lennie to save him from suffering, and in the doing so, also slays their shared dream of owning land and being free men.

In Romeo and Juliet, the hostility between the Capulets and the Montagues creates the conflict that drives the play.

This generation-spanning hatred consumes everything it touches: it causes the deaths of Mercutio at the hands of Tybalt, and drives Romeo to avenge his friend’s death by slaying Tybalt in turn. The hostility borne of this act forces Romeo to flee and Juliet to feign death; Romeo, consumed by grief, kills himself, and Juliet upon waking to find her husband dead, does the same.

We see that the hostility permeates every aspect of the play. Innocence, symbolized by the young lovers, is ultimately slain by the hostility shared between the two families.

In Steinbeck’s Of Mice and Men, George and Lennie, two farm hands, share a dream to own a piece of land, and in doing so, become free men. George appoints himself caretaker of Lennie, a large, abnormally strong man with the mind of a young child. The hostility that proves the downfall of these two men stems from Curley, the son of the ranch owner. A man possessed of a short temper and a violent streak, his cruelty forces his wife to seek the company of other men. She spends time with Lennie.

Warned that her presence causes trouble, he attempts to silence her when she creates a scene, and inadvertently kills her, his actions driven by fear concerning the hostility of Curley. Alarmed by his actions, he flees. The slaying of Innocence occurs when George kills Lennie in order to save him from cruel treatment and death at the hands of Curley and the other men. But in slaying Lennie, George also kills their dream of owning land, and being free men, and his own innocence as well. In both these stories hostility drives the conflict, propelling actions onward to the end, where innocence is slain and experience gleaned.

In Romeo and Juliet the death of the two lovers causes the families to ‘grow up,’ and abolish the hatred and hostility between the two houses. In killing themselves the title characters also kill the hostility that led them to their deaths, and though innocence dies, peace is achieved. In Of Mice and Men, the hostility of Curley does not die; what dies is the innocence of a dream and the the innocence of childhood, symbolized by Lennie. George gains experience, he ‘grows up,’ and in doing so realizes the futility of the dream of being free in the face of the hostility of the landowners, as represented by Curley.

And so Innocence is slain, and gives way to experience. Hostility remains in the world to aid in that transition. One cannot be Innocent always, and death and tragedy produce lessons one must learn in order to live in the world. Lovers die, as do hopes and dreams, but no matter how tragic or heartbreaking the events may be, one always gains lessons, often severe, from these losses. Such is life, as reflected in these works.

Innocence and Hostility in Romeo and Juliet and Of Mice and Men. (2017, Apr 14). Retrieved from https://studymoose.com/innocence-and-hostility-in-romeo-and-juliet-and-of-mice-and-men-essay 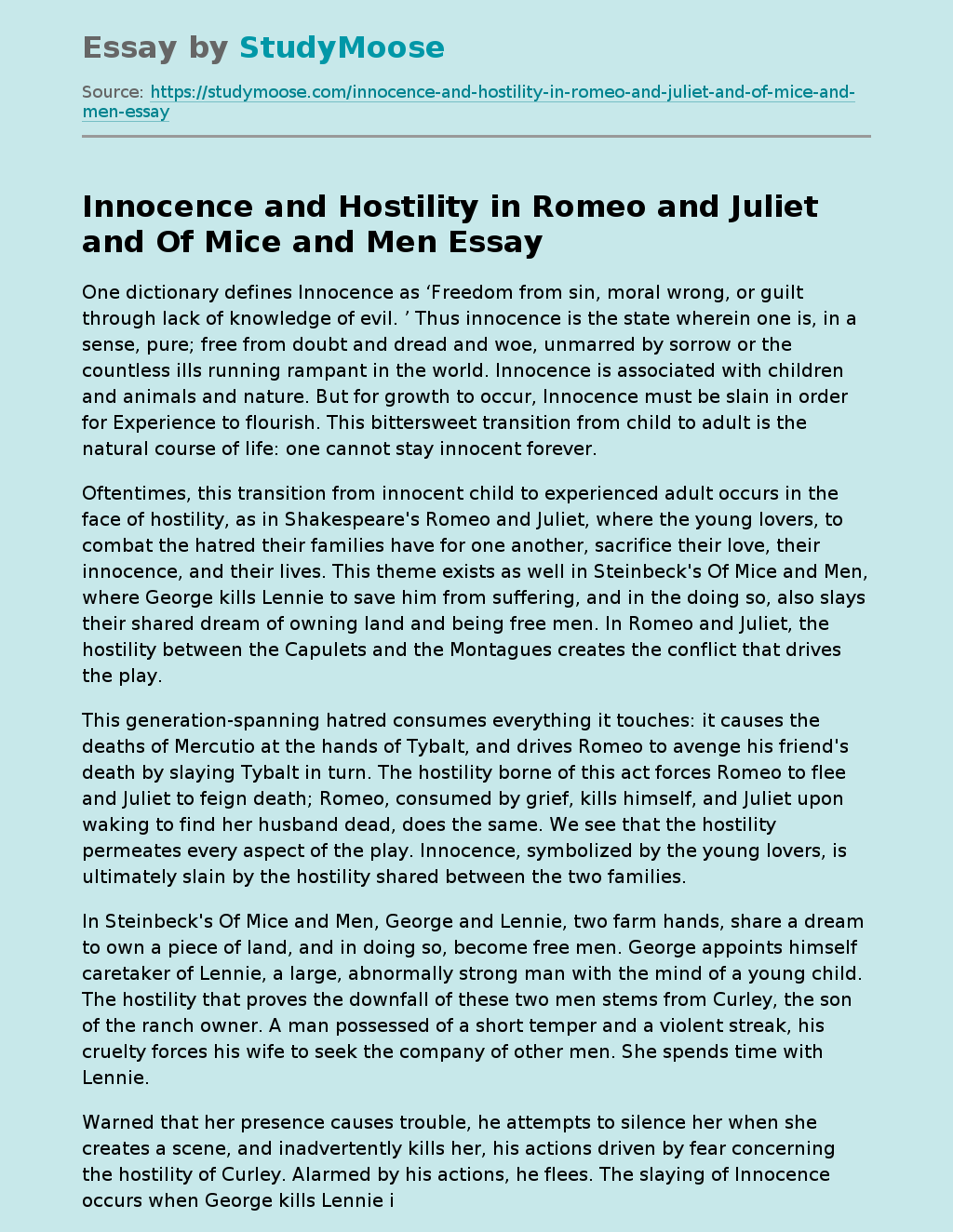