William Shakespeare’s Romeo and Juliet and Baz Luhrmann’s Romeo + Juliet (1997) both have an emphasised concept of civil disruption and chaos. Luhrmann’s Romeo + Juliet is a modern interpretation of Shakespeare’s 16th century romantic tragedy play about two young star-crossed lovers whose untimely deaths reconcile their feuding families. It was written among Shakespeare’s most popular plays during his lifetime and is one of the most frequently performed plays. Luhrmann’s adaptation preserves the traditional Shakespearean dialogue but represents the Montagues and Capulets as warring mafia empires.

In William Shakespeare’s play, the idea of civil disruption and chaos is clear by the actions and dialogue of characters. However, Baz Luhrmann has skilfully exaggerated this concept in the film by dramatically depicting the household’s hatred for one another through characterisation and camera angles. Luhrmann also emphasises the violence dominated city of Verona to set the theme by using visual features and sound effects. William Shakespeare has used a variety of techniques throughout the play to create a theme of violence and chaos.

He depicts this concept through stylistic devices such as Actions and Language. In Act 3 Scene 1, Shakespeare has portrayed the sudden, fatal violence and the build up to the fight through the dialogue between Mercutio, Romeo and Tybalt. Their dialogue expresses their tone and feeling towards each other, so the audience can imagine the feud unfolding. For instance, Tybalt expresses his hate during the fight when he says Romeo the love I bear thee can afford, no better term than this: thou art a villain and Boy this shall not excuse the injuries that thou hast done me.

Therefore, turn and draw. Tybalt’s fiery language labelling Romeo a villain and urging him to fight shows the audience the relationship between Tybalt and Romeo. Furthermore, by Tybalt referring to Romeo as a boy, it is evident that Tybalt sees himself as superior to Romeo. This scene creates chaos as it leads to the death of Mercutio and Tybalt and escalates the tension in Verona. Due to this civil brawl and deaths, the prince banishes Romeo which leads to a myriad of dilemmas later in the play. To summarise, Shakespeare has successfully created an idea of civil disruption and chaos through his clever use of language. In the opening scene of Romeo + Juliet, Luhrmann presents Verona as a modern city, dominated by scenes of chaotic urban violence. Aerial shots pan across the cityscape as police cars and helicopters dart about, and human casualties are strewn across the ground. These opening shots of the city show that it is divided by violence and sets the scene for the subsequent action of the film. Luhrmann shows the violence by his discerning use of camera angles in a gas station gunfight between Montagues led by Benvolio and Capulets led by Tybalt. He uses close ups of their eyes and guns to make the audience feel the intense hatred and anger between the two houses. In addition, another example of chaos is at the Capulet ball when Lord Capulet scolds Tybalt that he must keep peace in his household and not do Romeo any harm. Luhrmann depicts chaos in this scene by Lord Capulet’s furious, explosive behaviour. He uses intense, exaggerated facial expressions to show the fury he has when Tybalt does not agree to his terms. This later leads to Tybalt pursuing Romeo for he believes Romeo has caused him harm which results in death. Overall, Baz Luhrmann has cleverly incorporated the theme of civil disruption and chaos into his version of William Shakespeare’s tragedy Romeo and Juliet.There are major differences between both genres of Romeo and Juliet. Both William Shakespeare and Baz Luhrmann have cleverly used techniques to create the concept of civil disruption and chaos in Romeo and Juliet. However, Baz Luhrmann has successfully magnified the concept in his film to create a more action-filled, intense storyline. The modernised viciousness and danger emphasised in the film from the use of guns and special effects are dramatic tools that Luhrmann employs to engage his audience as he recognises it is expected in this generation. It creates a thrilling feeling of excitement, suspense and tension within his audience. The use of sound and special effects in the film makes the chaos more obvious to the viewer rather than reading it as it is difficult to portray violence in words. Additionally, camera angles are used to manipulate the audiences view on the characters and settings. Luhrmann used the advantage of being able to show the whole setting of Verona through the use of above aerial shots. On the other hand, William Shakespeare focuses more on the romance between Romeo and Juliet through his description of actions. Thus, it is evident William Shakespeare and Baz Luhrmann both emphasise a theme of civil disruption and chaos in their text genres. They do this by using stylistic devices to highlight the main scenes such as the fights and deaths within the play. This is evident when Shakespeare emphasises the death scene of Mercutio and Tybalt through the dialogue used. Additionally, it is also a clear theme when Luhrmann depicts the intense gas station fight in the opening scene. 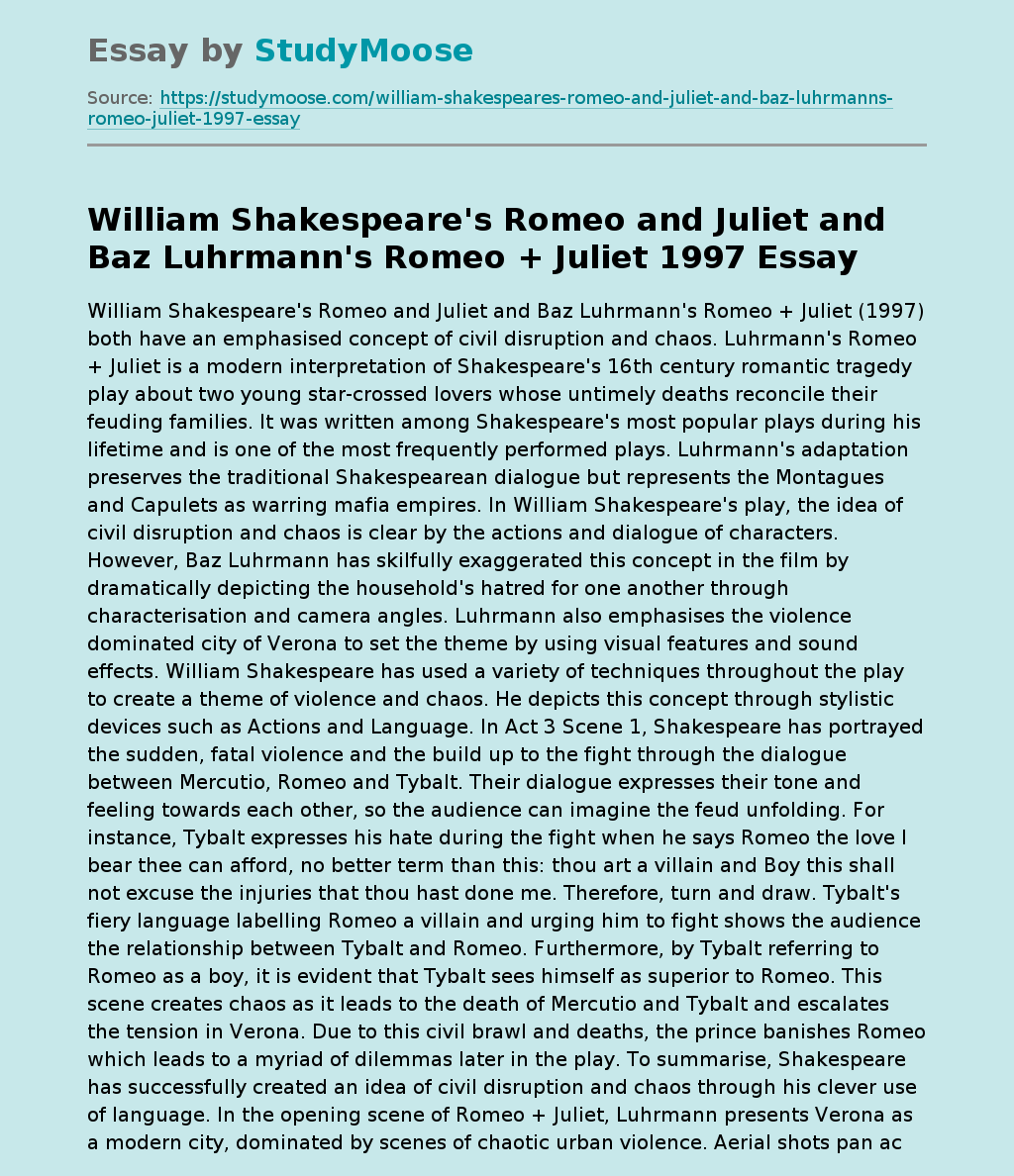