How do both directors reflect atmosphere, mood, and staging techniques of Shakespeare’s play? Which version is most dramatically effective, and why? Romeo and Juliet, a tragic tale of two “Star crossed lovers”, is believed to be written by Shakespeare in 1595. The famous playwright and poet copied the original works of Arthur Brooke and William Painter to develop a play that dramatises the story of two youths who fall deeply in love. However despite their feelings, their plans, and their emotions, they cannot be together.

Don't use plagiarized sources. Get your custom essay on
“ Comparison Between Shakespeare’s Romeo and Juliet and the Film by Baz Luhrmann ”
Get custom paper
NEW! smart matching with writer

The romantic account has recently been recreated though, the recreations becoming two internationally renowned films, that both take a special stance on the story of the Montagues and Capulets. Shakespeare sets the scene at the beginning of the play with an almost concluding speech. It tells the viewer or reader of what is to come, it gives great clues, it reveals insight that lies at the heart of the play throughout. Baz Luhrmann, in his modern version of the play, replicates Shakespeare’s opening, as he decided for the crucial beginning words to be spoken by a news reader.

However, despite Luhrmann’s copy cat start, he soon differentiates his film from the original play, when he opts to change Shakespeare’s minimalist first scene. Although Rome and Juliet, Baz Luhrmann’s film interpretation of the famous 16th century story, uses the same old English that Shakespeare’s text is written in, his first scene could not be more different than the traditional opening to Romeo and Juliet.

The Montague boys can be seen near the origin of the film, noisily riding along a Verona road. Despite the vast difference between Luhrmann’s film opening and Shakespeare’s, West Side story goes to an even further extreme.

There is little resemblance to the play compared to the beginning of Francesca Zambello’s West Side Story. The New York located film opens with a zoom out view of the Jets, (the Montagues), arrogantly clicking. The authority with which they strut around on the basketball court, the chosen scene, shows the same swagger but naivety with which Luhrmann’s Montague boys drive recklessly around “Fair Verona”. Both opening scenes alter greatly from the play, but they also differ from each other. West Side Story gradually increases in pace, whereas Luhrmann’s rapidly changing camera shots set the pace quickly from the off.

I prefer Luhrmann’s opening, as Zambello’s interpretive dance style start leaves the viewer wondering what they have witnessed. Luhrmann’s talkative beginning, which word for word replicates the original play, shows what each character is like, and truly reveals the traits of both Montagues and Capulets. Zambello’s start, however, is eventually of an interesting pace, but barely declares much of the Jets and the Sharks, the two gangs in the film, apart from the fact that they hate each other, almost as much as they hate the police.

It could be felt that the beginning of both films lacks the serious nature of the play, and merely show juvenile boys acting up, therefore not giving a good sense of what is to come. But although both directors have chosen to start the movie with a jovial mood, Luhrmann’s piece progresses briskly to show the families’ shared hatred. “Talk of peace? I hate the word. As I hate hell, all Montagues, and thee. ” There is no doubting the frightening sincerity of Tybalt’s words in the play and Luhrmann’s interpretation, however West Side Story’s introduction lacks sincerity.

Luhrmann’s staging technique style is clear from the very start, with a massive 90 shots in the first 4 minutes of the film. The film’s first five minutes talk 4 weeks to capture, as the “garage scene”, is very complicated. Luhrmann chose to start the film in a real environment, (not a set), but the effects are many. While Shakespeare may have intended for his play to be simple in its staging techniques, Luhrmann is able to convey an abundance of information about both families.

Whilst Zambello’s start may reveal a few things about the many gang members, Romeo and Juliet the film is in a different league. All Boys, both Montague and Capulet, in the first scene drip with manufactured detail put in place to show as much as possible about the several boys. The guns, the religious iconography, Tybalt’s grinding shoes, the over the top cars, all give a sense of wealth. This clue, doubled with the characters lack of awareness and obedience, shows that the out of control young men do not care for the police, or anybody else.

Although the sound in West Side Story is less non-dietetically changed than the sound in Luhrmann’s film, it is effective. The spooky whistling at the very beginning of the film and the sole sound of the Jets clicking shows slight similarities to that of a Spaghetti Western, and as the film continues through the actors emotions and actions there is further confirmation of this. The bravado dancing, clicking and laughter show that image is everything to the two big apple gangs, yet there is also a hint of playfulness.

The swingy, bouncy music continues throughout the beginning despite the many chases at the start of the film. Luhrmann obviously had a very different idea to the type of sound that should be used at the beginning of what is labelled a tragic tale. Once the cocky stereo music of the Montague’s has disappeared, the music creates a tense creepy atmosphere. All spooky diegetic sounds are amplified, such as the grinding of a heel, or the cocking of a gun, and there is a chilling undertone of music, that also replicates a Spaghetti Western.

The exaggeration of many sounds underlines the feud between the families, and the all-too serious gun warfare. The sound of the wind, the panting of a scared Montague, the fall of a gun, all of these sounds are very cleverly accentuated sounds in Luhrmann’s piece. This is dramatically, very effective. Whilst it is very difficult to judge a film against a script, even a film against a play, I believe that Luhrmann’s film far more successfully emulates Shakespeare’s play than Zambello’s.

This may be because Romeo and Juliet (the film) nearly word for word copies the great playwright’s prose, so how can it greatly differ? Shakespeare’s play directions are few and far between, so the original play and Luhrmann’s film are perhaps too close to judge, whereas West Side Story and Romeo and Juliet the film are perhaps too different to judge! Although Zambello’s film is based around Shakespeare’s play, unlike Luhrmann’s film, it is not meant to replicate it.

How can a modern film spoken in full old English verse be compared to a youth gang quarrel. The world of guns and full scale weapon fights is one incomparable with a youth argument fought out, or danced out, on a basketball court. This is why it is so different and interpretative at the beginning. It is intentionally different from Shakespeare’s play. However despite both films being surprisingly individual, I believe that for its many sound effects, staging techniques and other technical visual codes Baz Luhrmann’s films is more dramatically effective.

Comparison Between Shakespeare's Romeo and Juliet and the Film by Baz Luhrmann. (2020, Jun 01). Retrieved from https://studymoose.com/comparison-between-shakespeares-romeo-and-juliet-and-the-film-by-baz-luhrmann-new-essay 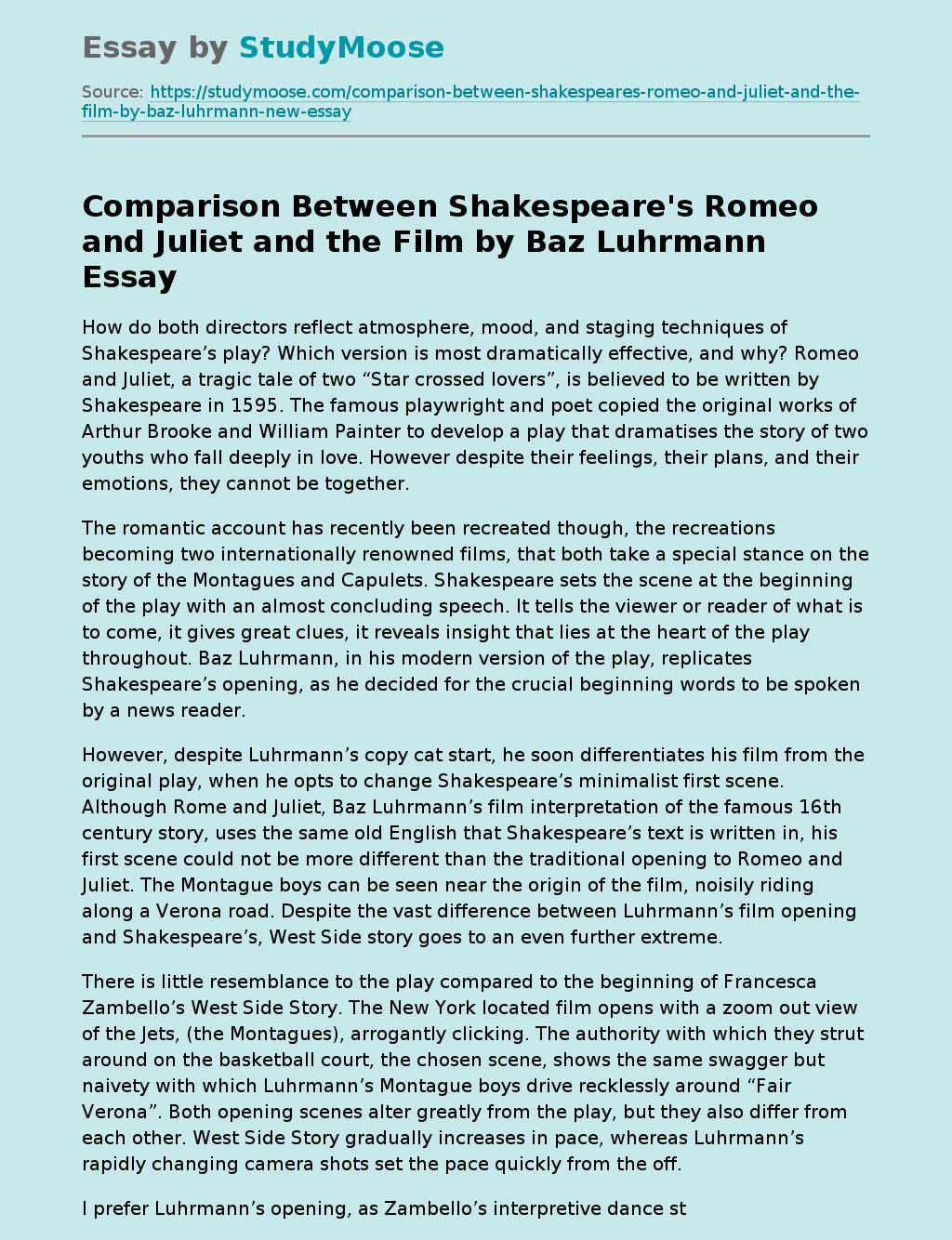