How does Baz Luhrmann use film techniques to make Shakespeare's "Romeo and Juliet"?

How does Baz Luhrmann use film techniques to make Shakespeare’s “Romeo and Juliet” more accessible to a younger audience, despite retaining the original Shakespearean language?

Romeo and Juliet released in London around 1595 was one of two major tragedy plays written by Sir William Shakespeare often thought to be the greatest dramatist this world has ever known, proven by the fact that the story of his victimised, star crossed lovers still lives on in the hearts of people today. In 1997, over four hundred years later, a new, fresh and innovative director called Baz Luhrmann re – released Shakespeare’s ancient tale of ominous love with an aim to make it more accessible to a younger 20th century audience – he succeeded.

Don't use plagiarized sources. Get your custom essay on
“ How does Baz Luhrmann use film techniques to make Shakespeare’s “Romeo and Juliet”? ”
Get custom paper
NEW! smart matching with writer

Luhrmann wanted to retain the original Shakespearean diction as not to lose the plays infamous, poetic flare, yet change and exaggerate other ideas rendering it more enticing for a younger generation previously steered away by not only the complex dialect but also the 16th century sets, confusing staging and odd costume.

Luhrmann eliminates any initial confusion as to the roles of each character and their relationships towards each other with much needed editing, introducing the main characters in the credits of the opening scenes. He also takes the audience away from the archaic titles used by Shakespeare of Lord and Lady Capulet/Montague and adopts a more contemporary style risking naming the renowned Shakespearean characters with modern day identities such as Ted and Caroline Montague, mother and father of Romeo arch rivals of Juliet’s own stern parents Fulgencio and Gloria Capulet.

Luhrmann also introduces us to other important characters from the play such as Benvolio Montague – Romeo’s cousin, Mercutio – his best friend, Captain Prince – the chief of police, Tybalt Capulet – Prince of Cats and the rich, successful Paris, proposed husband in Juliet’s arranged marriage. All of these characters preserve their original and individual Shakespearean identities, yet their personalities are re-angled and redeveloped out of Luhrmann’s own personal portrayal of them. Read about written after swimming from Sestos to Abydos analysis

Another major obstacle that often repels younger people is the problem of boring, wooden Elizabethan theatre settings, showing lack of imagination and regards for modern day locations and city life. Luhrmann recognized that this would be one of his main hurdles to create an interesting, yet, realistic environment, which a present day film, based on a four hundred and two year old play could be set in. Promptly, the shift was made from Old Verona in Italy, the original setting by Shakespeare to a fictitious ‘Verona Beach’ in Long Island, California. ‘Verona Beach’ adopted a modern city style, largely populated and with varying neighbourhoods. Time allocated at the beginning of the film showed aerial and switching shots of the different environs in the ‘new’ Verona as to allow the audience to become accustomed to the settings without just plunging into the acting – this way it was more simplistic requiring less of an explanation by the actors to their whereabouts and meaning that the original language could be retained almost exactly.

The fireworks at the banquet help illustrate to an audience unfamiliar with the works of Shakespeare that the party at Capulet mansion is an important turning point in the play when the two lovers first meet. Another subtle stage adaptation that reinforces the plot strongly is the fish tank, perfectly situated between Romeo and Juliet when they first meet. It is a lifelike symbol of the feud between the families, suggesting a barrier parting Romeo and Juliet particularly relevant because they can see each other yet can never be together. Realising the significance of the fish tank also helps people unfamiliar with the story to get more of an idea about how it unfolds and the reasons behind the feud.

Away from Capulet mansion Luhrmann also had to create the rest of the city with the same intention to make it more enticing for a younger audience. Overhead scope shots give the audience a feel for what Verona Beach would look like. Typical of an American city today, it comprises expressways, busy neighbourhoods, traffic jammed roads and much modern inner city deprivation. Sycamore Grove from the original Shakespearean writing was cleverly adapted to a lively fairground and beach area where the young would gravitate and spend most their days. The pool hall situated in a run down building on the beach where the Montague boys socialize and where Benvolio and Romeo have a game of pool helps a younger generation realize the differences between the two households that Luhrmann must have recognized and focused on.

The Capulet boys are seen as wealthy, aloof, very much more flamboyant about their religion and certainly more ruthless over the feud than the Montagues who appear quite slapdash, idle and just want to muck around – typical of young boys and obvious to an audience the differences between the youths of the two families. Possibly one of the best setting techniques that Luhrmann used was the abandoned, run down theatre at Sycamore Grove, only consisting of the stage area and the hollow arch way. Here some of the most climatic moments took place with the audiences view through the hollow arch and the actors behind it as if they were on stage at a real theatre. At the scene when Mercutio is killed by the oppressive Tybalt, the camera zoomed out to show the characters on the make believe stage through the theatre archway and no dialogue was needed as the characters ran off to the sides of the stage just like they would in a real theatre production leaving the dead Mercutio lying motionless centre stage. At various parts in the film the acting shoots back to the theatre arch at Sycamore Grove and ideally near the end after both Romeo and Juliet had taken their lives, a shot of the Grove is shown with bright stage lights illuminating a

dark and empty stage, probably how Romeo and Juliet the play would have culminated at a usual theatre production.

If Luhrmann wanted to show young people that a story such as that of Romeo and Juliet, could just as easily exist today in our fast moving, commercialized world, he needed a city that would suggest the typical life and social backgrounds of today for young people to relate, yet, still be a feasible setting to adapt the ancient love story to. Luhrmann wanted to suggest his view of the present day world, whilst also incorporating his views on Shakespeare. To make his fictitious Verona beach more appealing to the youth of today he used a lot of modern inner city deprivation, which would be typical of down town areas.

He showed open prostitution, much dereliction, vandalism and graffiti all to captivate a younger audience into understanding that Romeo and Juliet is the story not it’s setting and even maybe to show that Shakespeare hinted on these problems in society but could not possibly highlight them openly due to the moral principles of the time. Luhrmann, on the other hand, showed Verona with an exaggerated open gun culture and gang warfare, there were car chases in soft-top convertibles, police chases in helicopters and news reports all to make the film more meaningful to today’s younger audience, rendering it a successful box office hit. He also wanted to portray the open drug culture of modern society, depicting the moment when Romeo took an ecstasy tablet or so-called ‘love tablet’ not only to highlight to a younger audience the disastrous effects of drugs but also to symbolize the ecstasy of youthful love between the two main characters which Shakespeare expressed through poetic love verses.

In particular, Luhrmann wanted young people to understand the themes and issues behind the play and not only the violence and love scenes it is famous for. This posed another problem, yet he did not want to change the language or the whole film would most definitely be tainted and probably not as successful. Ingeniously, Luhrmann used advertising to convey the ideas of the play to a modern world influenced greatly by mass advertising and propaganda. Throughout the film posters on walls, billboards and signs all supported the 16th century themes of the play that Shakespeare had intended. During the first brawl which took place in a gas station the camera continuously shots back to a banner transcribed with the words, ‘Add fuel to your fire,’ obviously a typical advertisement of the gas station but also with a more sinister layer of meaning symbolising the constant feud between the families and purposely being destroyed by fire as a result of the brawl, this readily highlights the path of destruction whenever the two families collide.

Another advertisement this time on a billboard near the site where Mercutio is killed says ‘Shoot forth’ again symbolic of the violence and death within the play and the fact that many die so unnecessarily due to each other’s arrogance. Throughout the whole film a large, red billboard transcribed with the word ‘L’amour’ meaning love is used as a mis-en-scene included in various scenes to suggest that “Romeo and Juliet” centres on the theme of love and lust in young people. However, just after Romeo’s marriage to Juliet the ‘L’amour’ billboard is seen again, yet just after it another one with a more important message reading, ‘Such stuff which dreams are made of,’ implying which Shakespeare suggested that the love could never be, again hinting on the plot and helping the audience to understand that the lovers are not only victimised by the feud between their families but also their own hasty temperaments.

How does Baz Luhrmann use film techniques to make Shakespeare's "Romeo and Juliet"?. (2020, Jun 01). Retrieved from https://studymoose.com/baz-luhrmann-use-film-techniques-make-shakespeares-romeo-juliet-new-essay 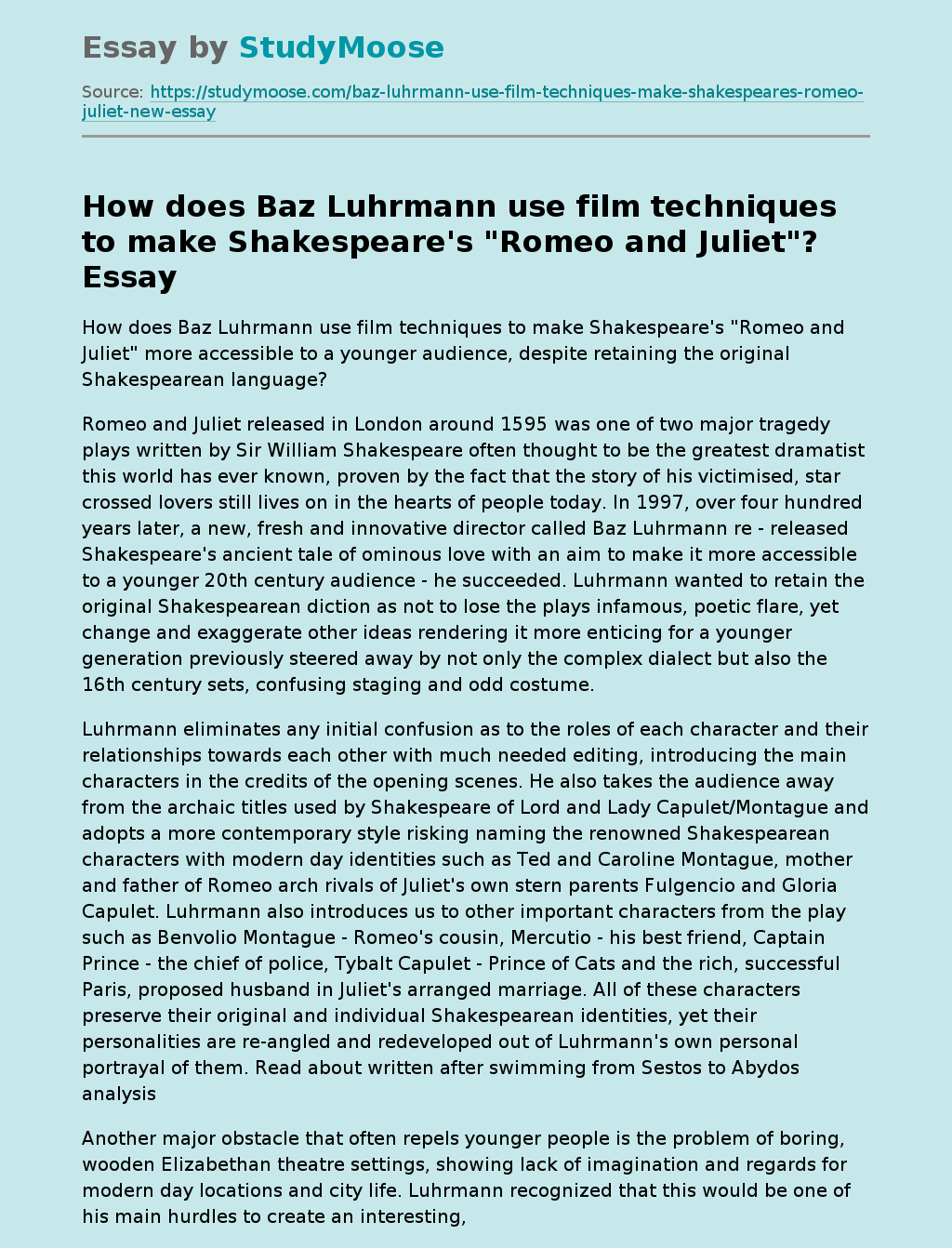