The Montagues and Capulets in Baz Luhrmann's 'Romeo and Juliet'

William’s Shakespeare’s Romeo and Juliet, directed by Baz Luhrmann, is a film in which media techniques are used to portray the conflict between two rival families: the Capulets and the Montagues. Mise-en-scene, camera movements and shots, editing and sound are all employed by the director to show the bitter conflict between these rival families. The opening scene from this film is The Prologue, which sets the scene and uses mise-en-scene, camera movements and shots to introduce the theme of conflict.

Don't use plagiarized sources. Get your custom essay on
“ The Montagues and Capulets in Baz Luhrmann’s ‘Romeo and Juliet’ ”
Get custom paper
NEW! smart matching with writer

The mise-en-scene of a long shot of Verona Beach introduces the rival families by showing two large business towers bearing the names ‘Montague’ and ‘Capulet’. These towers are elevated above a religious statue and show that – for these families at least – power, wealth and status are more important than religion. Furthermore, inserts are also frequently used to draw the audiences’ attention to phrases such as “Ancient Grudge” which reinforces the theme of conflict and tells the viewer that this conflict is generations old.

In addition, the camera pans across a series of magazines with images of guns and war which further serves to highlight the theme of conflict to the audience. The Gas Station scene follows The Prologue and uses mise-en-scene to effectively portray conflict between the Montagues and Capulets by highlighting the differences between the two families. A mid-angle shot from behind introduces the Montagues: they are listening to loud, upbeat hip-hop music, which immediately suggests they like having fun. Their car is a bright yellow open top, which shows they are relaxed, cheerful people as the colour yellow implies.

They wear unbuttoned Hawaiian shirts of bright, saturated colours and lots of loosely hanging jewellery: all of this tells the viewer they are casual and laid-back. However, this is in stark contrast to the Capulets who arrive in a dark blue car with tinted windows, bearing the word ‘executioner’ on the front. The cold colour blue, coupled with the tinted windows (which enclose the car and make it seems unwelcoming and faceless – in direct contrast to the Montagues open top) make the Capulets appear dangerous and uninviting.

The word ‘executioner’ suggests they desire war, an idea that is furthered by the fact they dress in black and red colours. Their hair and persons are well groomed, showing that their appearance means a lot to them. The mise-en-scene of these shots displays the two families in direct contrast. While the viewer is not told of any specific reason for the conflict, it soon becomes apparent that they are very different and this helps to explain their extreme hatred of each other.

The Montagues and Capulets in Baz Luhrmann's 'Romeo and Juliet'. (2020, Jun 02). Retrieved from https://studymoose.com/montagues-capulets-baz-luhrmanns-romeo-juliet-4449-new-essay 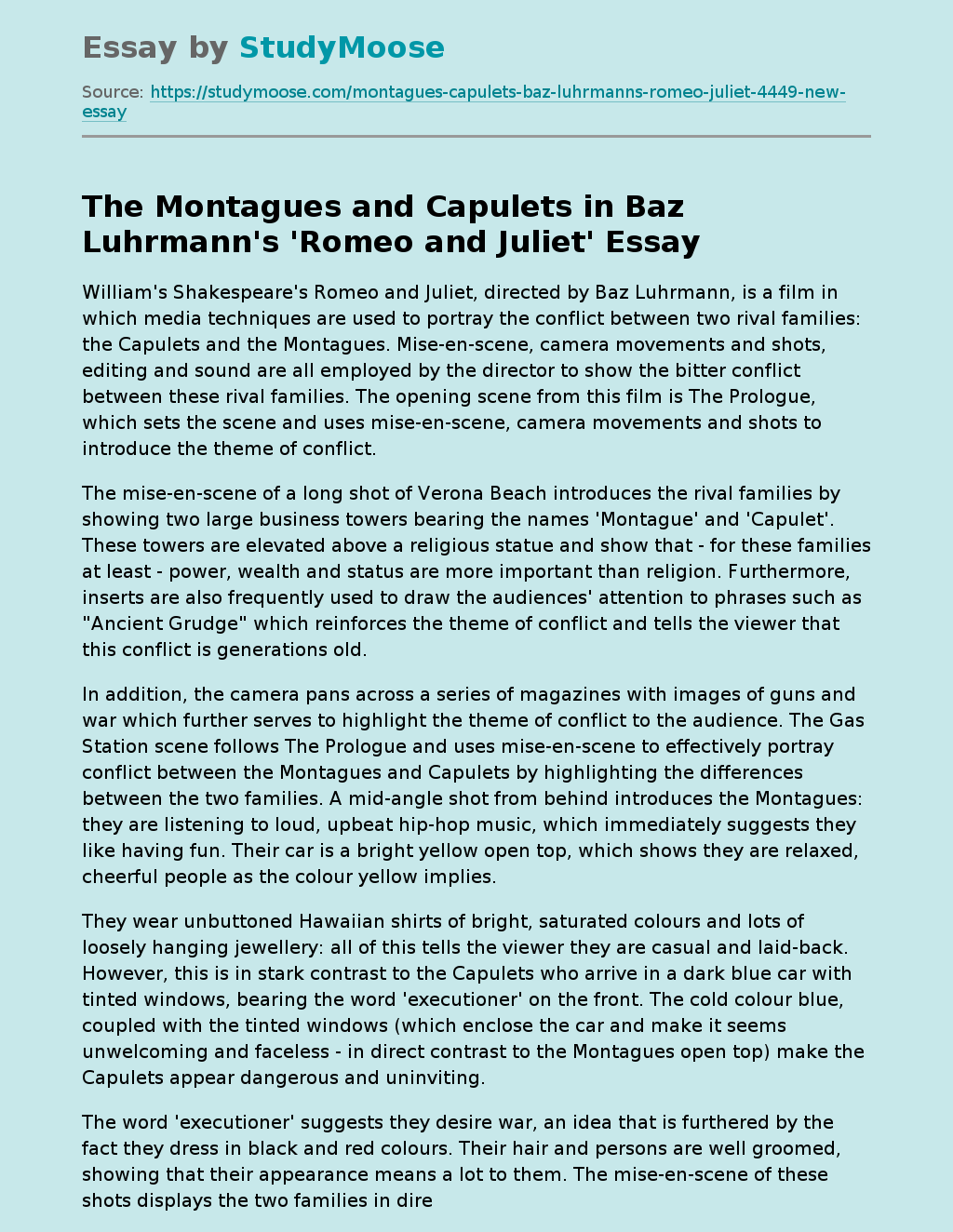