Shakespeare’s Romeo and Juliet is a popular text used in schools. It appeals to a teenage audience because of the simple plot where ‘A pair of star-crossed lovers take their lives’ Teenagers can relate to Romeo and Juliet because of the conflict between themselves and their parents. Baz Luhrmann’s adaptation of the play uses a range of very clever techniques filled with gangs, guns, car chases and lots of music.

If you have never read or watched a version of Romeo and Juliet it can often be hard to follow Shakespeare’s language.

From the very beginning of the film our attention is secured by seeing a television screen with a news reporter stating the prologue.

You are instantly hit with images from the newspaper headlines that are shot across the screen; these give you an idea of the feud between the two families. For the ‘Two houses, both alike in dignity…’ they are illustrated as figures of authority and as two large corporate families, rather than two noble families. The fathers of the families have a mafia feel about them, it is almost their identity.

Throughout the film there is an assortment of music. Each song is very different, but has been appropriately selected to suit the characters. ‘When Doves Cry’ was originally sung by Prince, however Luhrmann has cleverly transformed it into a choirboy singing it on his own. It is used in the scene where Romeo and Juliet get married. The use of the choirboy solo makes us see the purity and innocence of the two lovers. The first time that Romeo and Juliet kiss Desree is singing ‘Kissing You’ in the background, which exactly describes the moment and sends a shiver to your spine. The Cardigans version of ‘Love me Love me’ is a more comical number but once again very fitting. Although Shakespeare may not have needed a soundtrack to his plays, Luhrmann has carefully selected one of sound and fury to add to the drama.

The director may have attracted more people by adding the use of ignorance and selfishness across the two families. This would appeal to young people of today because this is how we can sometimes be. The Capulets and Montagues do not think of anyone but themselves. They don’t care about the people around them, this is not because they have become evil they are just careless teenagers growing up. This theme has a similarity to the people in this generation because they too are growing up. Read about az Luhrmann Romeo and Juliet film techniques

The costumed ball tells us a lot about the characters. Mercutio turns up as a drag queen, which is an element to his sexuality. Whereas in Shakespeare’s era drag queens and sexualities were not thought of, they would have been considered as abnormal. This also fits Mercutio’s character because he is a natural performer. His lines are always very witty and he is generally over the top. Juliet is wearing a pair of angel wings and is dressed all in white. This symbolises her purity, innocence and light. Other illustrations of this are in her bedroom where she has religious icons and candles. Romeo’s warrior costume reflects his character because we all know that he hates violence and wishes for peace between his family and the Capulets. Tybalt usually has a black costume, which is an indication of evil. We all know that he hates peace and ‘…all Montagues…’ Lady Capulet wears an Egyptian pharaoh outfit, which suggests that she is a powerful and strong woman.

Baz Luhrmann has decided to introduce a lot of drugs into his own version that would never have even been thought of in Shakespeare times. At the party Mercutio gives Romeo a drug that sends him on a trip. There is a particular point where he has to wash his face with cold water and there is clever use of a camera trick that makes it look like Romeo cannot see properly and as if the room is spinning. This is a very modern day feature to have in the film. There is also the ‘…dram of poison…’ that Romeo buys towards the end of the play. As well as Friar Lawrence who seems to be a herbal drug experimentalist, along with a vicar, and gives Juliet the sleeping potion.

The overall setting in Verona Beach seems like a completely different world, but we do not realise that it is actually quite similar to the world in which we live. It is full of violence, sex and drugs. It is not in the future or the past. It is obvious that The Capulets and Montagues rule it. They are very alike in wealth, selfishness, and ruthlessness and are equally powerful but still continuously arguing, until the two ‘…lovers take their lives.’

Luhrmann was very wise with his casting methods. Choosing someone as popular as Leonardo DiCaprio was certainly a good idea because at the time he was seen to be a heartthrob and he had a star appeal. Claire Danes, also a very well known actress, was not stunningly pretty but had a smile that could light up a room. She was a very emotive and convincing Juliet. They are very believable as two teenagers who have fallen in love at first sight.

The weapons used in Romeo and Juliet are up to date and modern guns but they still have the same old language printed on them. This is one of the many alterations that Luhrmann has made to the play. The language is unaltered but, in my opinion, does not have the full effect that Zeferelli’s version did because of the American actors accents. There are times when it is hard to understand what has been said because of the way it has been spoken. When Romeo and Juliet first meet at the Capulet party they meet across a fish tank, which I think worked well because it was unusual yet appropriate. However, the biggest alteration to the plot is at the end when Juliet wakes up just as Romeo is dying. I think this works because it makes it just that little bit more dramatic and ironic. There were seconds in it and it made the situation seem even worse than it already was.

Together with the camera moves and tricks, sound effects and track, as well as a clever casting arrangement, Baz Luhrmann created a very successful version of Romeo and Juliet. He did not adapt any of Shakespeare’s language; he just simply made some very wise choices and imaginative ideas to ensure that his version would appeal to a very large audience. If Romeo and Juliet really is a timeless story, then this version, by Baz Luhrmann, is perfect for it’s time. 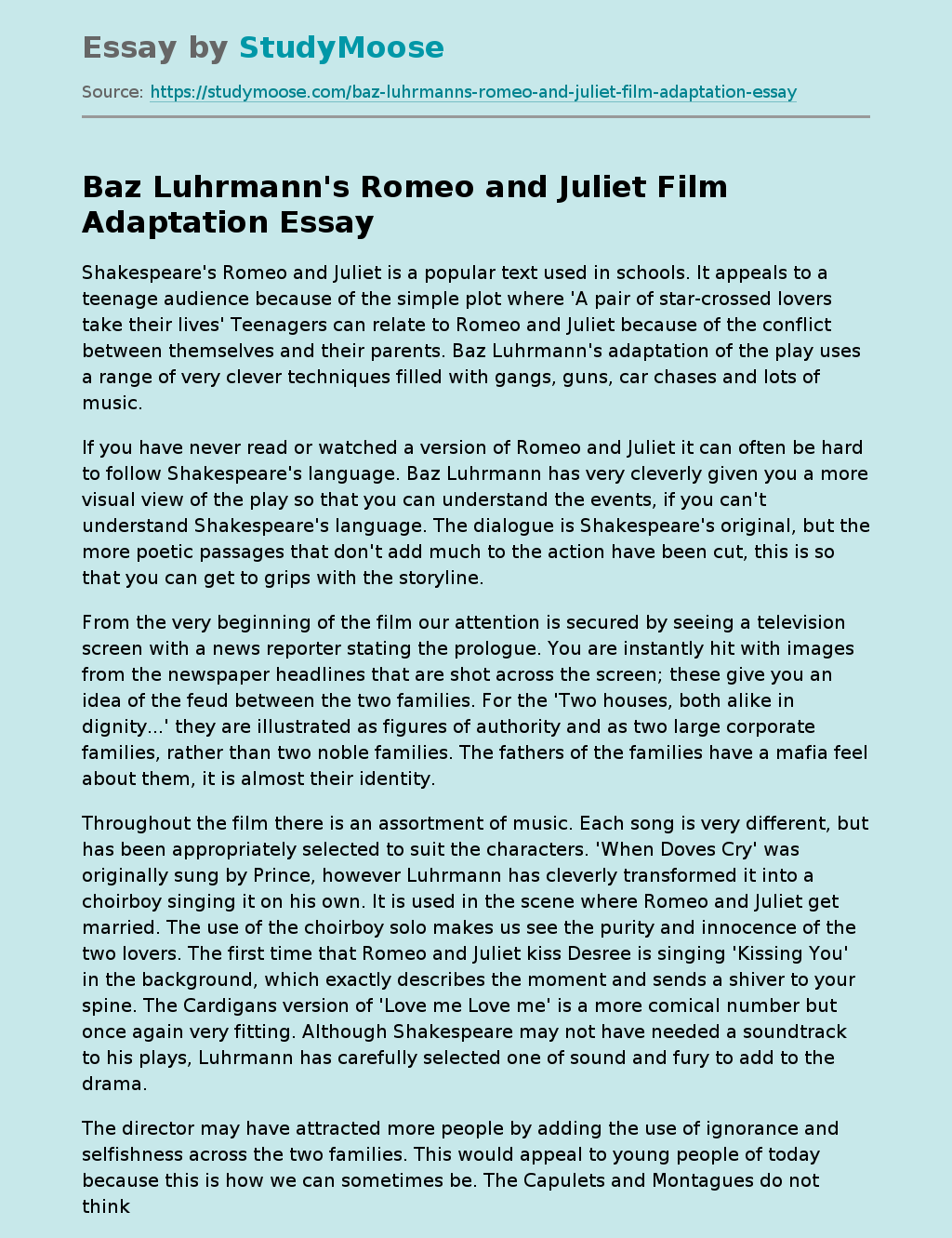