One story. Two adaptations. One a traditional Shakespearian film and the other a product of the MTV generation. Two very different films of the same love story. From the generations they come from they are very good examples of the things people were doing then but as an interpretation of text they both lack something which gives the story its element.

Franco Zeferelli did the film in a very traditional way. He kept the Italian theme running the whole way through and picked actors with a certain look which worked well.

Don't use plagiarized sources. Get your custom essay on
“ Romeo and Juliet Luhrmann and Zeffirelli Film Comparison ”
Get custom paper
NEW! smart matching with writer

Although true to the text through out Zeffirelli’s ending wasn’t true enough and took away the real meaning to the end of the story. The set design is how I would of expected it to look like in such a place and time period. The costumes added to the effect, intensifying rivalry between the families because you could always tell who was who even if they didn’t speak.

The fact Mercutio is actually related to the Prince is made clear in the Zeferelli film.

The actors used in the Zeferelli film over dramatised some of the scenes which made the film more unrealistic. He left out quite a lot of the deaths, such as Lady Capulet. Including this may have made the end more dramatic and probably better than the one he used. Overall I think that the Zeferelli film was very true the text and kept some of the original themes running through but had very weak actors and a very weak ending.

Baz Luhrmann went for the approach of modernising the film. Lurrhman set it in what was Miami Beach but he called “Verona Beach.” It was all very trashy, when Mercutio and friends went to the Capulet ball they were all on ecstasy, neon crucifixes popped up about the place. Some of the relationships were made very unclear and others intensified. Lady Capulet seems to be very friendly with Tybalt and Dave Parris. This was not in the book and was a typical case of powerful vulgar mother over shinning the sweet daughter. Lurrhman did not include that Mercutio and The Prince were related. This might have been hard because the Prince was actually head of the police department. It may well have been a sly hint at it because both actors were black. When Tybalt and Mercutio are fighting in the book at first they are just joking but in the film they are properly fighting, and Mercutio doesn’t joke around so much he says it is “merely a scratch,” and then starts to go mad and everyone knows he is being serious.

Rather than have Italian actors, Lurrhman decided to use Hispanic ones, everything was a lot more Spanish in the film except the mafia ness of the families. He also made the Capulet completely Hispanic except the mother and Juliet and made the Montague’s completely White- American.

Lurrhman kept the Shakespearian Language changing only some parts of it, an example the way Benvolio will say his line followed by “Cuz.” I think this worked and didn’t work. It worked because it kept truer to the text but didn’t work because it sounded out of place against the setting, and when they would speak or sing normally, an example when Mercutio sings young hearts.

I think Lurrhman did better justice to Mercutio’s character than Zeferelli did. Lurrhman managed to keep Mercutio a big question mark, on his sexuality, feelings towards Romeo, state of mind and still made him out to be a tortured soul. Zeferelli didn’t manage to keep that and made him appear to be on drugs all the time or just slightly mad.

I think both films worked in their own ways but neither did the text as much justice as it deserved. 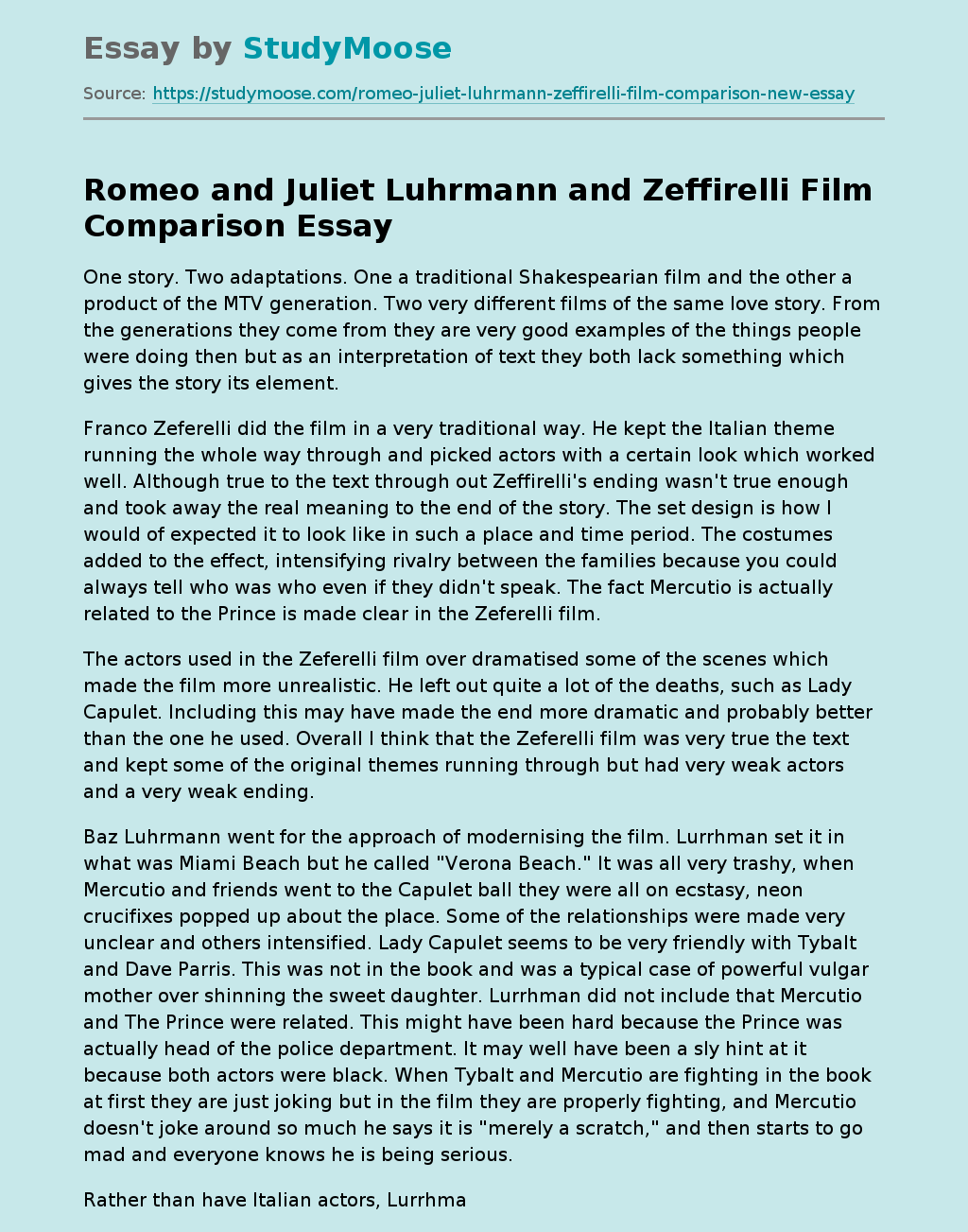