Pride and prejudice compare and contrast novel and film 2005

Jane Austen penned masterfully the novel Pride and Prejudice. For many countries for many years and with or without the movie adaptation, this novel has achieved superstar status, considered by many as one of the best work of fiction that they had and one of the most read. Proof of the very good story line behind the novel is the fact that movie and television production outfits does not seem to tire in making movie adaptation of the novel year after year.

Turn in your highest-quality paper
Get a qualified writer to help you with
“ Pride and prejudice compare and contrast novel and film 2005 ”
Get high-quality paper
NEW! AI matching with writers

Because of this, it has become important to criticize the resulting characteristics that will surface once comparison between the movie, particularly the 2005 version, and the novel is made. This paper will discuss several significant characteristics noticeable in the comparison of the 1813 Jane Austen novel with the 2005 film adaption of Pride and Prejudice, and these are (1) inconsistencies with the characters, (2) compressed scenes, (3) changes in the scene and (4) the introduction of new scenes. Inconsistencies with the Characters

One of the noticeable characteristics that the 2005 film version of the novel has in comparison with the original novel story is the changes that happen to the characters and the personalities of these characters.

Some differences are minimal, like the changes in the physical attributes of the characters. A very good example of this is the case of the character of Mr. Collins. Mr. Collins, it seems, was described in the original novel as a person with who is tall.

However, in the movie, this characteristic is not noticeable in the portrayal of Mr.

Collins, as the Mr. Collins in the 2005 Pride and Prejudice movie cannot be characterized as tall since he seem to have the height common with the other male characters in the movie. There were also some noticeable differences in the way the character Elizabeth was portrayed in the movie compared to the way Elizabeth was constructed by Austen throughout the novel. In watching the movie, the audience may have the impression that Elizabeth has a very negative temperament, that she is highly strung or even boorish.

But in the book, Elizabeth has the personality that qualifies her as someone who is more on the positive temperament, sprightly and even playful. Proof of this is unexpected, unrealistic and somewhat inconsistent characteristic of Elizabeth was a part in the movie wherein Elizabeth yelled at her mother in defiance, pointing to Elizabeth’s more negative behavior. This is somewhat contrary to the original Pride and Prejudice story because in the novel, the author did not make Elizabeth yell directly to her mother.

While Austen made it obvious that Elizabeth has the characteristic to defy her mother, she did not do so directly and verbally. Another important point to raise here is that in consideration to the lifestyle and culture of the people during the time, daughters yelling at their mothers is something that is not common or usual compared to today, making it more unrealistic and not faithful to the original story and faithful to the culture in the real life during that time.

Stephen Holden even went to the extent of claiming that Elizabeth’s 2005 portrayal is “not exactly the creature described in the 1813 novel (Holden 1). ” Compressed Scenes The novel features a story that is considered lengthy if everything in it will be featured in the film. This is the same predicament that most movie adaptation of a novel encounters, and the movie adaptation of Pride and Prejudice is no exception. The director is forced to cut, shorten and compress the different parts of the story in the effort to make it faithful to the novel and still ideal for the movie market.

Because of this, significant missing parts in the movie that was featured in the novel are some situations and circumstances which are deleted, cut or shortened. Take for example, the part wherein Elizabeth was visiting Pemberley, Hunsford Parsonage as well as Rosings Park – this, as well as other parts of the novels where heavily compressed. The story focusing on how Lydia eventually eloped in the novel was also something that was compressed. Changes in the Scene Some scenes that were described by the author in the original “Pride and Prejudice” novel was not translated similarly in the film version.

For example, when Darcy proposed to Lizzy for the first time, the author placed this particular scenario somewhere inside the house of Mr. Collins. But the 2005 movie version of the novel made it different, because in the movie, the proposal was made by Darcy to Lizzy while they were both standing under the rain. There were also significant and noticeable changes even with the second proposal, since the circumstances that led to the second proposal were different in the book compared to the scenes shown in the movie.

According to the novel, the proposal happened after Lizzy did something for Mrs. Bennet that sent Lizzy in a particular place that night, but the circumstances presented in the movie puts Lizzy in bed but unable to get sleep, so she went out for a short walk and in the process meeting Mr. Darcy who was also taking a walk thinking about something serious that involved Lizzie as well as Lady Catherine de Bourgh (Ernst 44). Introduction of New Scenes In comparing the movie and the novel, another noticeable characteristic is the presence of scenes, situations and circumstances which are integral in the movie but is nonetheless not found in the novel.

For example, there was a scene wherein both Mr. Darcy and Elizabeth were seen by the audience walking one night with nothing but their night clothes on. This kind of situation is something that is not presented in the book, and an educated guess might point to the fact that there maybe some reasonable factors why such was not the case in the novel – because it is not realistic. And the reason why this is not realistic is because the temperature may not be very convenient for someone to walk around on their night clothes on at night, and because this is not the action of someone who is of Mr.

Darcy or Elizabeth’s stature, not to mention that walking around in nightclothes is something that is not usual, common or even normal during the time and age presented in Pride and Prejudice. Still related to the discussion on how the movie presented some scenes which are not only consistent with the novel but is also not consistent with the practice of the people during that time/era is the scene wherein Lady Catherine paid the Bennets a visit late in the night, and the Bennets greeted their visitor wearing their night clothes only.

This is not in the novel, and this goes against common cultural practice among homes. People during that time make sure that they are fully dressed before presenting themselves to visitors. And visitors don’t actually visit other people unannounced and in very inconvenient times of the day or night. Because of these inconsistencies, the audience cannot help but feel that the creation of the 2005 movie version did not only put in scenes and details that are not consistent with the novel, it was also reflective of the lack of sensitivity with regards to the time, era and period that the novel that the story represents.

Besides the inability of the production to consider being faithful to the culture at the time, some audience may also feel that the production of the movie did not seriously studied the aspects and details that support and put together the story as it is (like culture, practices etc). Conclusion The 2005 movie adaptation of Pride and Prejudice can be viewed in different contrasting perspectives. On one side, it can be considered as a very successful movie considering that it is an adaptation from a very popular novel and that many other adaptations made in film were created before it.

On the other side, people can simply focus on the flaws and failures of the movie adaptation and call the movie not a worthy enough to be considered a film adaptation. In the end, it’s all about perspective. While there are indeed problems, there are also merits that the movie earned for it to be considered as good enough. “Like any other film adaptation, Austen’s Pride and Prejudice has positive and negative conditions for a translation onto screen (Ernst 35).

” The truth is that for all of the differences that the 2005 movie had when compared to the novel it was based on, this is not surprising since the predecessor of this movie adaptation – which was already numerous since there is the 1940, 1980 and 1995 version – also has several flaws themselves, particularly when it comes to bearing differences from the original novel. There were also other little changes that were seen in the 2005 film. According to the website IMBD, a website that focuses on providing information about movies, there was even a difference in the ending in the US film (Pride and Prejudice 6).

For all of these things, the only consolation there is can be found in the effort to be faithful to the novel by the movie, and for what it failed to accomplish. The audience should understand that there is indeed no perfect movie adaptation, since both movie and novel, however similar in story, are still different entities by themselves (Lupack 277). Works Cited Ernst, Reni. The Presentation of Speech and Thought in Jane Austen’s Price and Prejudice and in Joe Wrigth’s Film Adaptation.

Pride and prejudice compare and contrast novel and film 2005. (2016, Nov 05). Retrieved from http://studymoose.com/pride-and-prejudice-compare-and-contrast-novel-and-film-2005-essay 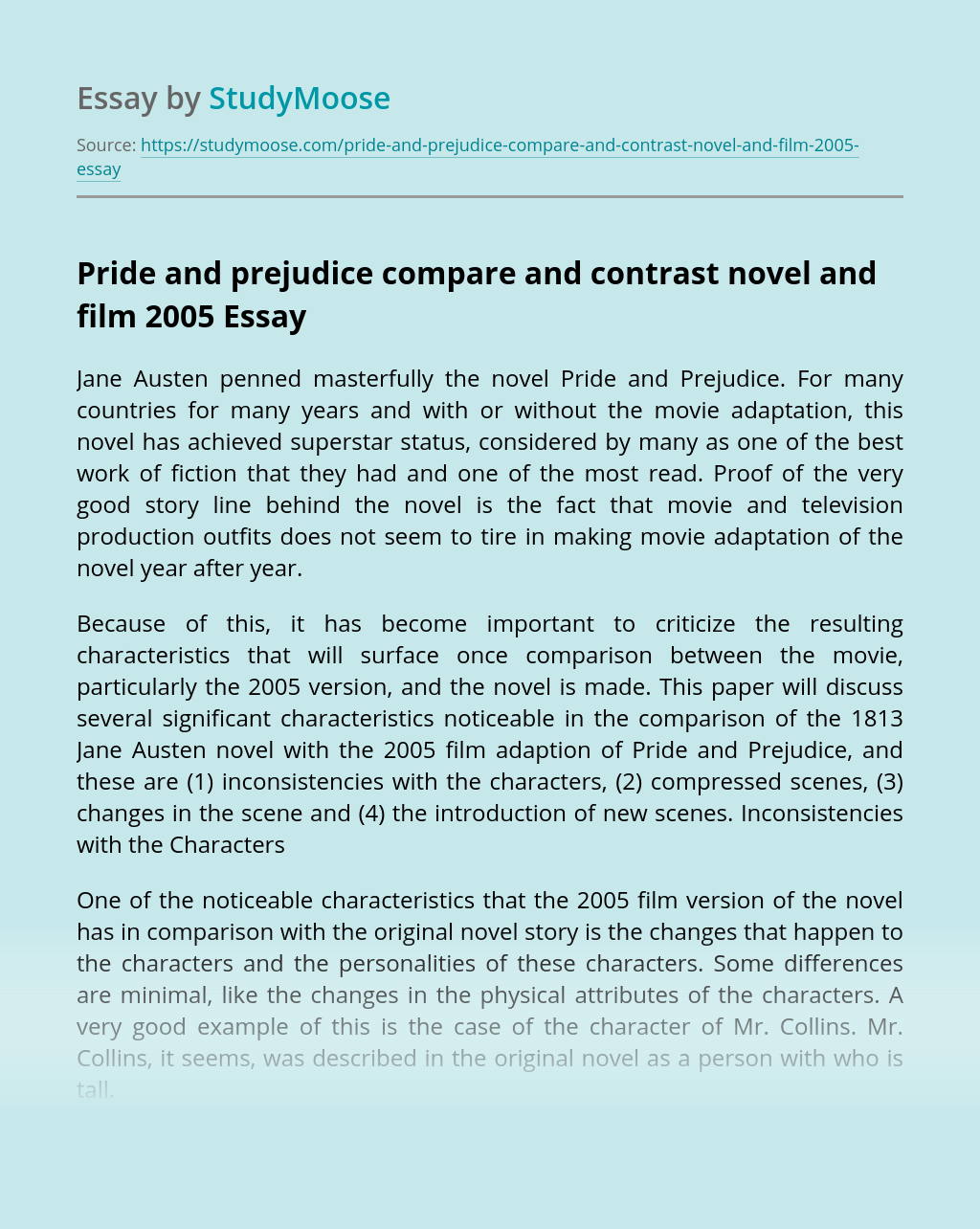 Turn in your highest-quality paper
Get a qualified writer to help you with
“ Pride and prejudice compare and contrast novel and film 2005 ”
Get high-quality paper
Helping students since 2015
Stay Safe, Stay Original