Mrs. and Mr. Bennet : Parenting in Pride and Prejudice

A thorough second reading of Pride and Prejudice compels the reader to view the novel with a different perspective. Besides being a novel of courtship and romance, it focuses on decorum of conduct. Pride and Prejudice is about consequences. Jane Austen introduces her characters to the reader through simple conversations, refraining from authorial comments and physical descriptions to bring out their personalities. This shows her general disposition of not letting appearances affect her moral choice. Through her varied characters, she not only entertains her reader but also makes a point, without preaching.

Don't use plagiarized sources. Get your custom essay on
“ Mrs. and Mr. Bennet : Parenting in Pride and Prejudice ”
Get custom paper
NEW! smart matching with writer

The novel begins with a conversation between Mrs. And Mr. Bennet. At once we are introduced to a couple whose banters are distressingly amusing, half parts witty and half parts inane. Mrs. Bennet fails to catch her husband’s sarcasm and the ill-treatment he metes out to her ‘poor nerves’. Mr. Bennet is aware of her feelings but he is not interested in her constant raptures and worries.

Their weak understanding is the consequence of a marriage based on superficial factors like appearance and sexual chemistry.

As a result, their parenting lacks wisdom and Jane Austen brings to light the upshots of such a marriage through various social means. When dealing with five children, it is only natural to have favorites among them. But good parenting is one where you keep it to yourself rather than avowing your views in front of the less favored siblings. In case of the Bennets, their bias is critical. And their open criticism of their less favored daughters does them no good.

Mr. Bennet’s calling his two youngest daughters ‘uncommonly foolish’ and ‘the silliest girls in the country’ evokes only a sense of incredulity in Mrs. Bennet whereas Lydia is least affected by her father’s contempt. Her mother takes her side rather than seeing the point her husband is trying to make. As a result, Mr. Bennet’s contempt for Lydia has no effect on her as she continues to express her admiration of officers with ‘perfect indifference’.

On the other hand, Elizabeth is Mrs. Bennet’s least favorite daughter. By repeatedly reproaching Lizzy in front of Lydia, Mrs. Bennet brings down Lizzy’s position as an elder sister in Lydia’s eyes. Lydia therefore doesn’t value Elizabeth’s views and has no respect for her intellect. The two teenaged daughters, Kitty and Lydia, are audience to their parents’ uninhibited criticism of Mrs. Long. The Bennets’ ‘failure to obey some arbitrary code of genteel conduct’ results in an equally forward and shameless daughter who is exposed to bad manners at a tender age. And Lydia is exposed to her mother’s horrifying public conduct throughout her teenage, up till the point, where she herself becomes a cause of embarrassment and mortification. By speaking ill of her neighbours and rebuking Elizabeth in front of the Netherfield party, Mrs. Bennet degrades the essence of relationships in Lydia’s view who thus fails to see nothing of a person beyond their appearance and physicality.

Jane Austen uses the power of conversations and situations to bring out the contrast between good and bad. The moment Mrs. and Mr. Gardiner are introduced to the readers, we are awed by their genteel conduct and their love for their nieces. Mrs. Gardiner shares a healthy relationship with Jane and Elizabeth, especially with the latter. After Charlotte Lucas, Mrs. Gardiner is the only other person in whom Elizabeth confides. Mrs. Gardiner, being a fine judge of character, helps Lizzy in assessing situations well and is a companion to her in her doubts and philosophies. Mrs. Bennet, as a mother, should have been by her daughter’s side when deciding upon matters concerning lifelong felicity, like marriage. She should have been her guide, a friend, while choosing a life-partner for her daughter. Rather, her ‘habitual impropriety is a material impediment to her daughter’s chances of making a prosperous marriage’.

It is her aunt instead, who by stressing to Lizzy her strengths of fine judgment, helps her keep a check on her thought-process. She even warns Eliza about Wickham’s suspicious manners. All of this, Mrs. Bennet fails to do as a mother. Unlike his wife, Mr. Bennet had the intellect and thus the power of directing his family towards a better path. He knows what right conduct is and isn’t oblivious to his daughters’ bad manners. But he chooses to sit back and relax in his library, thus dodging any responsibility that comes his way. His not saving money for his daughters even though he knew well that he couldn’t leave behind his estate to them brings out the worst in Mrs. Bennet. This forces her to consider every other charming, rich man as an eligible husband for her daughters. ‘It is thus entirely natural and plausible that a mother in her situation…would develop an overriding anxiety about their [her daughters’] future.’ “I remember the time when I liked a red coat very well-indeed so I do still in my heart.”

These lines by Mrs. Bennet are a confession of her still unappeased sexuality and by saying this she fosters in Lydia the thought of righteousness of uncontrolled sexual energy. She thus catalyzes Lydia’s already growing frivolous nature. Mrs. Bennet favors Lydia and is totally blind to her flaws to the extent that she blames the Forsters for Lydia’s elopement. Jane Austen cleverly voices the reader’s opinion of the shortcomings of Mrs. Bennet’s parenting through her own mouth – “I am sure there was some great neglect or other on their side, for she is not the kind of girl to do such a thing, if she had been well looked after”, though these accusations of Mrs. Bennet are directed towards the Forsters. Mr. Bennet fails to secure his family financially. Yet he could have imparted to them what money could never have done.

He could have at least preserved the respectability of his daughters by channeling their energy and talents. A strong mind would have surpassed the material impediment that money is for the Bennet sisters. On the one hand, where Lydia is an element of stupidity and triviality in the novel, Elizabeth shows a change of character, alignment of priorities and the liveliness of a strong mind. Though brought up under the same roof, one can notice the degradation of morality and character in the Bennet sisters. Jane has a calm and composed countenance. Elizabeth has a fine intellect but shows a streak of her mother’s forwardness. Mary Bennet is the least interesting of all. Her display of her scholarly opinion once in a while is more or less her role in the household.

Easily influenced by her younger sister’s wild ideas about life, Kitty is merely a companion to Lydia in her flirtatious adventures. Lydia is an untamed and fearless young woman who ‘subordinates all decent occupations to the pursuit of males.’ Jane and Lizzy’s closeness to their uncle and aunt, the Gardiners, early on in their life is the reason for their strong set of principles. The first three sisters are all well-read and this is the result of the exposure to their father’s extensive reading habits.

Kitty and Lydia are the outcome of Mrs. Bennet’s frustrations resulting from failed attempts of having a son. Mrs. Bennet fails to separate herself from Lydia and gives her a piece of her mind, literally. Lydia’s proximity to her mother spoils her to the extent that the presence of two morally adept sisters, an uncle and an aunt is not enough to affect her. So guarded was she in her world of immorality. Lydia is less of anti-heroine. She is simply the product of a feckless father and a noisy and raucous mother. It is thus unfair to label her as an anti-heroine. But by her means, Jane Austen contrasts the goodness of Elizabeth, the heroine.

Mrs. and Mr. Bennet : Parenting in Pride and Prejudice. (2016, Dec 19). Retrieved from https://studymoose.com/mrs-and-mr-bennet-parenting-in-pride-and-prejudice-essay 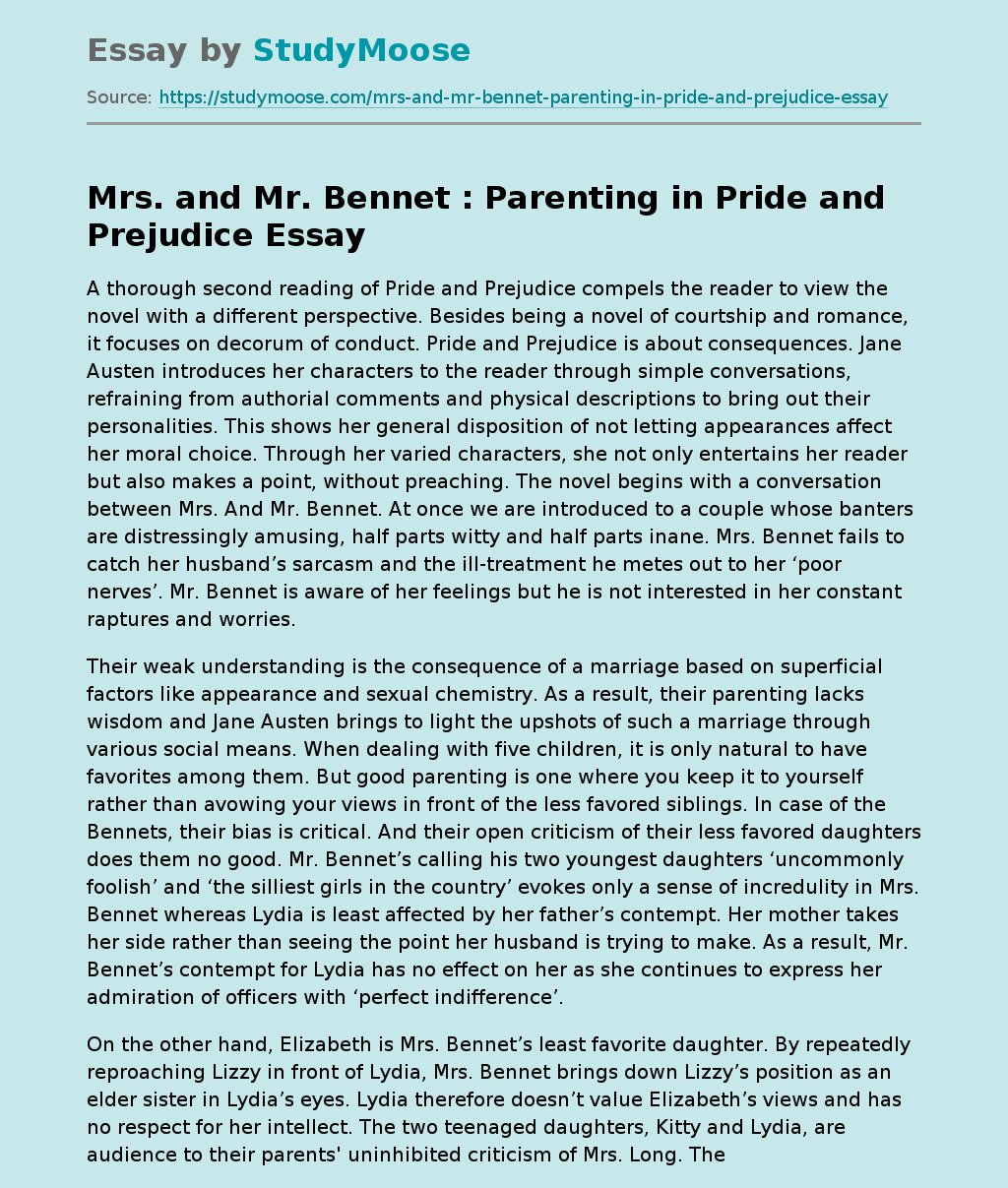