Comparison of Elizabeth Bennet's Marriage Proposals in Pride and Prejudice

Through the course of the novel, Elizabeth Bennet receives two very different marriage proposals, and a declaration of love. In chapter 19 Mr. Collins proposes to Elizabeth in his long-winded and pretentious manner, and in chapter 34 Mr. Darcy makes his own conflicting proposal of marriage. In chapter 58 Darcy asserts his love for Elizabeth despite her previous rejection of him. From the way each man makes his proposal we learn a great deal about their characters, and we see Elizabeth’s own character reflected in her reaction to each.

Turn in your highest-quality paper
Get a qualified writer to help you with
“ Comparison of Elizabeth Bennet’s Marriage Proposals in Pride and Prejudice ”
Get high-quality paper
NEW! AI matching with writer

Even by chapter 19, the reader has been drawn in to such an extent by these characters that we empathise with them greatly, especially Elizabeth and Mr. Darcy. The reader identifies particularly with Elizabeth, the protagonist.

At the beginning of the novel, long before Collins’ proposal, we have grown to dislike him. When Collins proposes to Elizabeth, the reader knows that he will not be successful. We have a distaste for Collins after we are told he first wanted to marry Jane, but then turned to Elizabeth when he discovered Jane’s relationship with Bingley.

We know he had no affection or attraction to either, so we hope that his efforts towards Elizabeth fail.

Before proposing, he effectively asks for permission by informing Mrs. Bennet of his intentions. He planned it out and went about it in such an orderly manner that we imagine that he had rehearsed it. His three reasons for marrying are solely practical; “I think it a right thing for every clergyman in easy circumstances to set the example of matrimony in his parish.

” “I am sure it will add greatly to my happiness.” “It is the particular recommendation of the very noble lady [Lady Catherine de Bourgh] whom I have the honour of calling patroness.” He is not interested in love.

Despite Mr. Collins’ assurance of the “violence of my affection”, he has no true affection or love for Elizabeth, so shows himself to be insincere. His snobbery and arrogance are evident when he insults Elizabeth’s family and lack of wealth and uses his connections to the De Bourgh family as a reason to marry him.

Elizabeth is amused by the ridiculousness of the situation, but keeps herself composed and clearly refuses the proposal. “It is impossible for me to do otherwise than decline them.”

Collins is incredulous and tries to convince himself that she is teasing him. He is condescending and patronizing, and refuses to take her seriously. “You are uniformly charming.” He reveals his vanity in his presumption she will say yes.

Elizabeth viewed marriage as something to be undertaken by two people who were in love. By refusing Collins, she was taking an enormous risk, as no one might ever propose to her again. In the early 1800s marriage was the only way for women in Elizabeth’s position to provide a secure future for themselves – Elizabeth’s future was in doubt as was her family’s estate, Longbourn was entailed. A woman’s only other options besides marriage were, as women were not permitted to work, to live with and be dependent upon relatives, e.g. brothers, cousins, married sisters etc. Perhaps if she were well educated she might have become a governess.

Elizabeth’s refusal shows her to be a woman with integrity and great tact. She hides her feelings of “distress and diversion”, and is polite. When she refuses she is extremely polite, commenting that she is “well aware of the honour of your proposals.” She is dignified and does not react to Mr. Collins’ insults about her family’s wealth and status, or indeed his “willful self-deception” when it came to her answer.

Shortly afterwards, Charlotte Lucas, Elizabeth’s friend, receives an offer of marriage from Collins and accepts. Charlotte’s view of marriage was more pragmatic – marriage was primarily about security – love was a secondary criterion. Charlotte certainly did not love Collins; it was the hope of financial security that attracted her into the marriage, if she were in love with Collins it would only be a luxury. These were the accepted beliefs at the time among the middle and upper classes. Charlotte would endure a loveless marriage for the hope of financial security.

In chapter 34 Darcy makes his first proposal to Elizabeth at Hunsford, the worst possible time for him to do this, as Elizabeth could not have hated Darcy more at this time. She blamed him for the unhappiness of Jane as Darcy had discouraged Bingley’s affection towards her, and for that of Wickham, whom she believed had had his inheritance denied to him.

Darcy appears greatly agitated when he made his proposal. He enters her room and walks about for a while before speaking, even then to make a few awkward enquiries after Elizabeth’s health. He was fervently in love with Elizabeth and speaks briefly and passionately. “In vain I have struggled. It will not do. My feelings are not to be repressed. You must allow me to tell you how ardently I admire and love you.” This outburst is in sharp contrast to Collin’s long pre-planned monologue, and shows true emotion instead of false sentiments of affection.

But Darcy is also strikingly similar to Collins’ in his arrogant presumption that she will accept him, “he spoke of apprehension and anxiety, but his countenance expressed real security”. His utter bewilderment that she should refuse him “…no less resentment than surprise. His complexion became pale with anger, and the disturbance of his mind was visible in every feature.” This demonstrates the same sort of conceit that Collins displayed.

Darcy then goes on to insult her Elizabeth’s family and circumstances. “Could you expect me to rejoice in the inferiority of your connections?” His insensitivity to Elizabeth is clear – he describes his feeling for Elizabeth as against his better judgement, “his sense of her inferiority – of it’s being a degradation – of the family obstacles which judgment had always opposed to inclination.” Again he shows himself to be proud, snobbish and superior, like Collins.

Elizabeth is flattered initially by Darcy’s attention, “she could not be insensible to the compliment of such a man’s affection.” But Darcy’s attacks on her pride provoke her to anger, “Elizabeth felt herself growing more angry every moment.” This indignation finally climaxes with a severe blow to Darcy’s upper class sensibilities “…it spared me the concern in refusing you, had you behaved in a more gentleman-like manner.”

Darcy is shocked and hurt by this accusation. Despite his pride, this causes Darcy to reflect deeply on his behaviour and to modify it in future.

The two of them leave each other, both of them angry and upset.

Elizabeth is shocked by Darcy’s proposal but keeps her composure and remains dignified. She is brave and strong-willed in standing up to Darcy. She is not moved by his wealth or status and stays true to her principle of marrying for love. She does not accept the conventions of her time that it was acceptable to marry for money. She is completely honest and sincere with Darcy, and shows great integrity and independence. Elizabeth however is completely serious when dealing with Darcy, compared with her guarded politeness when with Collins, whom she found to be ridiculous.

In chapter 58, during a visit by Darcy and Bingley to Longbourn, Elizabeth and Darcy proclaim their love for each other, and it is understood that they will be married. There is no formal proposal from Darcy; the idea of a future marriage is implicit.

Elizabeth admits that her feelings have changed. She had been blinded by her initial poor first impressions of Darcy, and prejudices produced by her being taken in by Wickham’s deception. She admits that she was wrong, “She explained…how all her former prejudices had been removed.” She is embarrassed by the remarks she made to Darcy during his proposal, “do not repeat what I then said…I have been most heartily ashamed of it.”

Darcy’s love was unmoved by Elizabeth’s rejection; he still wants to marry her. He admits the follies of his past behaviour – conceit, arrogance, snobbery. “I have been a selfish being all my life, in practice, though not in principle.”

We know that Darcy had been transformed. Instead of shunning the Bennets because of Lydia’s social disgrace, he tracked down the couple and paid Wickham to marry her, thus rescuing the family from ostracism in society. Furthermore, he seeks amends with Jane by encouraging Bingley to marry her by admitting his misunderstanding of her affection for him, and his concealment of her visit to London. He is also gracious to the Gardiners when they visit Pemberley, even inviting Mr. Gardiner to accompany him fishing.

Darcy explains how he made a conscious effort to change after Elizabeth’s accusation of “ungentleman-like behaviour”. This was an uncomfortable truth for Darcy, and the reproach spurred him to change his behaviour. “Those were your words…you can scarcely conceive how they have tortured me. Before I was reasonable enough to allow their justice.”

Elizabeth tells us how she began to lose her prejudice after receiving a letter from Darcy explaining his actions in the affairs of Wickham and Jane. “Darcy mentioned his letter…She explained…how gradually all her former prejudices had been removed.” She is also pleasantly surprised by Darcy’s civility during her visit to Pemberley, and this too affects a change in her emotions.

Each of them has helped the other become a better person; we feel the two are ‘right’ for each other. We feel confident that they will be contented together in married life and grow in mutual love and respect.

After the correction of Elizabeth and Darcy’s faults, the two have earned each other. They deserve a happy married life based on mutual devotion and financial security, with which Austen rewards them. 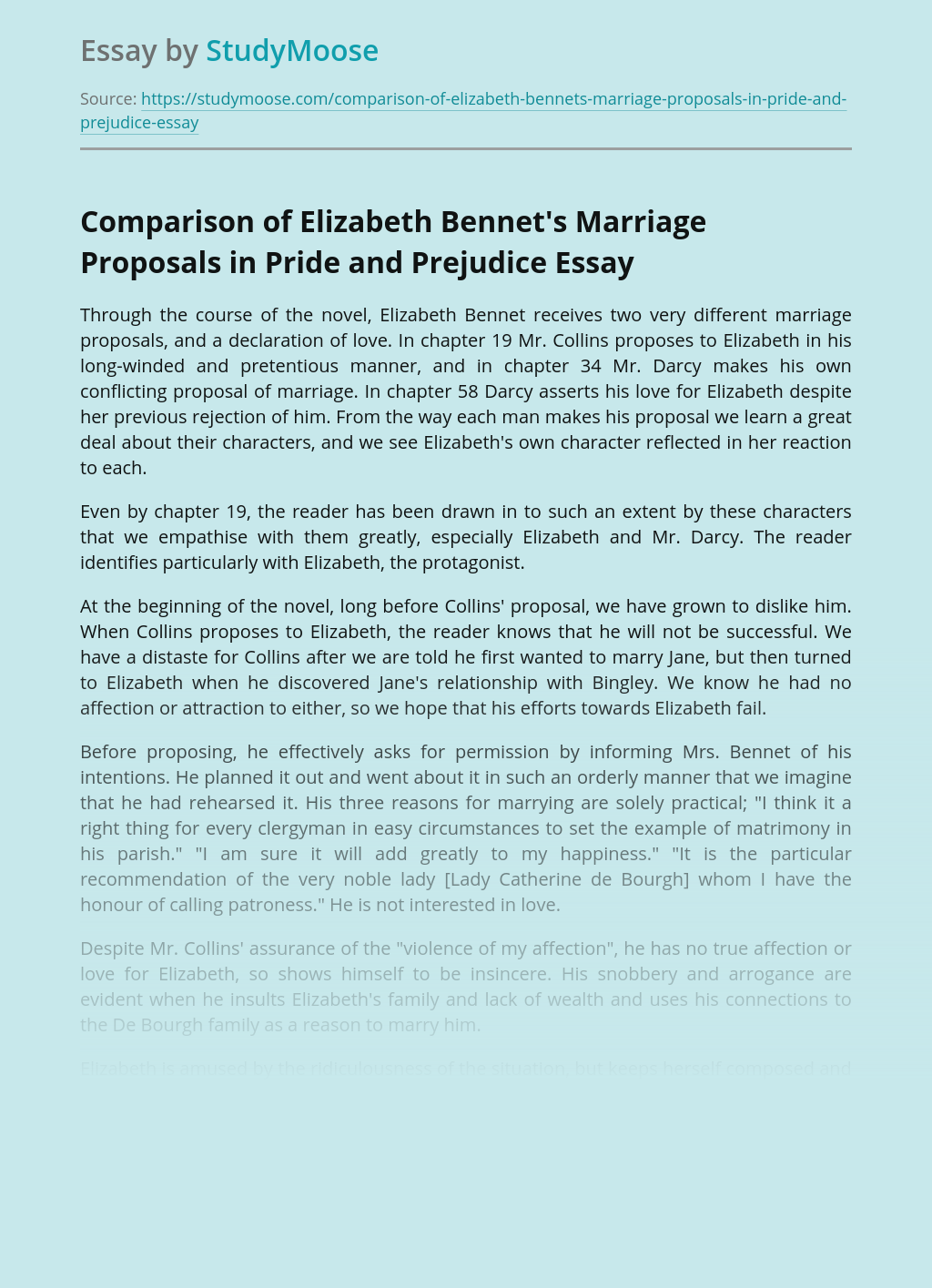 Turn in your highest-quality paper
Get a qualified writer to help you with
“ Comparison of Elizabeth Bennet’s Marriage Proposals in Pride and Prejudice ”
Get high-quality paper
Helping students since 2015
Stay Safe, Stay Original