The Effect of Pride and Prejudice on Darcy and Elizabeth's Relationship

The novel ‘Pride and Prejudice’ was written in 1796. It was written by a writer who’s name was Jane Austin. The book was first published in 1813, and has consistently been Jane’s most popular novel. The original version of the novel was written in 1796, and was called ‘First Impressions’.

In the story there is a family called ‘The Bennett’s’.

Don't use plagiarized sources. Get your custom essay on
“ The Effect of Pride and Prejudice on Darcy and Elizabeth’s Relationship ”
Get custom paper
NEW! smart matching with writer

This is one of the main families in the book. The whole novel is almost based around this family. In this family there is, Mr & Mrs Bennett, Jane, Elizabeth, Mary, Lydia, and Kitty. There are five daughters. Mrs Bennett is very determined to get her daughters married to someone with a lot of money.

An entail is to limit the inheritance of property or estate to a specified succession of heirs.

A good marriage is very important for everyone.

This is because the person you get married to is the person that you are going to spend the rest of your life with. In the time that Austen wrote her novel, marriage was for life. There was no way out of a marriage. Divorce was not a common occurrence as it is today. A good marriage is important because you and your partner are together “to have and to hold, in sickness and in health”

There are many effects of pride on the relationship of Darcy and Elizabeth.

In chapter 33, Darcy says, “It distressed her a little,” this evidence, tell us that Darcy thinks that she likes another man called Colonel Fitzwilliam. He believes that she will marry to have financial security because Colonel Fitzwilliam is rich. However, Elizabeth knows that she will marry for love and not for money. So Darcy is shown to be prejudiced against Elizabeth, because she is of lower class of him and he believes that she will marry for wealth. Hence, Elizabeth’s pride is hurt because, she thinks that she may not be of equal level as Darcy in wealth but believes that she is equal to him in her knowledge and understanding. On the other hand, Darcy could just be saying this because he is insecure that
she is not interested in him and does not want to show this. So he decides to put down Elizabeth instead of showing that he is hurt by Elizabeth’s decision.

Darcy is also shown to be prejudice towards Elizabeth’s family in chapter 33 in another way. “Congratulated himself on lately having saved a friend from the inconveniences of a most imprudent marriage”. Fitzwilliam says to Elizabeth that Darcy has said this. Darcy is shown to be boasting about the fact that he has saved his friend form a marriage. He thinks that he has saved his friend from marrying a woman not worth it, and who is not of the same class as them. Elizabeth’s pride is again hurt because he is downgrading her family. Darcy thinks that Elizabeth’s sister Jane is not good enough for his friend, Mr.Bingley. So, Elizabeth’s hatred for Darcy is growing by the fact that he is prejudice towards her family.

The audience now are made to believe that Darcy is the “bad guy”. However they do not realise that what Fitzwilliam has said, could be gossip.

Elizabeth shows pride in her character through the way that she talks about her family. She talks about her father and her sister Jane as being respectable. This is shown in chapter 33 by the phrase “respectability” while she is talking to Colonel Fitzwilliam. Here she is trying to show Darcy that her sister, Jane, is more than worthy of being Bingley’s wife. So she shows pride by the fact that she knows that her family is of lower class of the Bingley’s yet her family is more than worthy of being related to them.

In chapter 34, Darcy proposes to Elizabeth who rejects him. He says, “You should be grateful that a rich man like me is making an offer of a life of luxury”. This shows that Darcy is proud of the riches he has yet is being egotistical because he is implying that Elizabeth is lucky to have a rich man ask for her hand in marriage. Once again, referring to her and her family as being lower to them. On the other hand, Elizabeth has rejected the proposal form the narcissistic Darcy on the accord of him once again degrading her. She does not want to marry him as she sees her self as equal to be equal to him and not just of a lower class. Darcy is being prejudice towards her and yet again he has offended the pride of Elizabeth.

Elizabeth now thinks that Darcy is a bad man. She thinks that he is arrogant and vein about the fact that he has more money than herself and her family. Yet she still believes that she is of equal status and will not let herself give in to any temptation of wealth, but would like to be with someone who will provide love.

Up till this point in the story we can see that both characters, Darcy and Elizabeth, both exhibit pride and prejudice. Darcy is proud of being a high status, rich, upper class man. Yet he is prejudiced towards Elizabeth because she is of a lower class and he thinks he should be able to get her easily. On the other hand, Elizabeth has pride in the sense that although she knows she is of lower class she holds pride in the fact that she has high amount of knowledge and is not a walkover. However she is prejudiced towards Darcy because she judges him as being someone who is just about money. Also, she makes opinions of him based on what other people have said, not realising that it might not be the truth.

In chapter 35, Darcy says, ” Wickham’s chief object was unquestionably my sisters fortune, which is thirty thousand poundsâ€¦.” Here Darcy is saying that Wickham was only making up stories about what he said about Darcy. Reason being that Wickham made things up about Darcy because he prevented the marriage of him and his sister. Elizabeth begins to realise that he may be telling the truth.

Darcy sends Elizabeth a letter, apologizing to her about his actions and expressing his deep down feelings. He lets her know how he feels about her. This letter really bugged Elizabeth because she read it over and over again. The more she read it the more she realised that she was wrong of judging him on first impressions. She learns a lot more about him by reading the letter over and over again.

As she reads the letter over and over again, she begins to realise that she was in the wrong. However, she does not want to believe this. This is shown in chapter 35 where Elizabeth says, ” this must be false”. This shows us that after realising what Darcy is really like, she does not want to believe that she was wrong. May be because she is proud. However her views change about Darcy after this.

Pride and prejudice have a very big effect on Darcy, and Elizabeth’s relationship. I think that both characters have each other to blame for the inconveniences they caused each other. They are both proud of their own social status and they both do not which to be judged. However they both are prejudiced towards each other in many senses. Darcy is prejudice towards Elizabeth because he believes that she should be flattered that he has proposed to Elizabeth, being of a lower class than he is. On the other hand, Elizabeth is prejudiced towards Darcy, because she judges him on first impressions and on what she hears about him. I think that this pride and this prejudice that both characters poses, only causes them to be distant from each other for a longer period of time and that they should have been a happy couple form the start. This could have been done if they did not let their pride come in the way.

The Effect of Pride and Prejudice on Darcy and Elizabeth's Relationship. (2016, Mar 20). Retrieved from https://studymoose.com/the-effect-of-pride-and-prejudice-on-darcy-and-elizabeths-relationship-essay 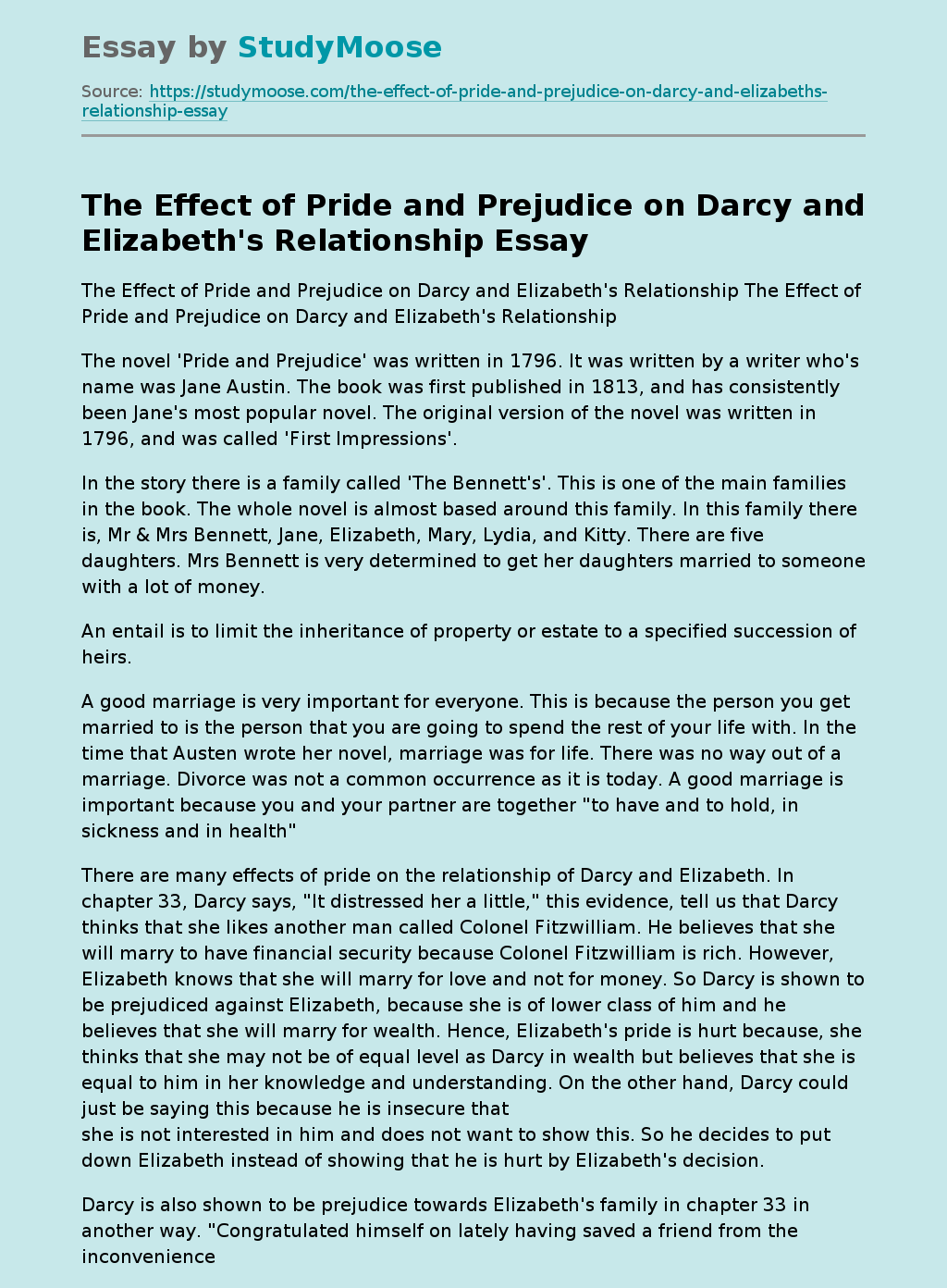