Look again at the Darcy’s first proposal to Elizabeth that is made in this novel. Choose at least two and, write responses to the following questions:

* under what circumstances does Darcy propose

* how does Elizabeth respond and why

* how does Austen present the proposal to the reader

That evening, just before Mr. Darcy comes to meet Elizabeth , she rereads Jane’s letters and finds out Mr. Darcy’s ‘shameful boast’ of misery that inflicted Jane’s happiness and it gives her a ‘keener sense of her sister’s sufferings’.

To Elizabeth’s ‘utter amazement’, Darcy enters the room approaching her ‘in a hurried manner’ enquiring after her health. He ‘sat for a few moments’, got up, and ‘walked about the room’. Mr. Darcy’s body language shows that he is nervous and agitated. Then he took several minutes to say his true love for her that how ‘ardently’ he ‘admires’ and ‘loves’ her. However, the reader later realises that his nervousness is not due to his love for Elizabeth is so great but due to the hesitation, whether it is a good idea to propose considering the inferiority of her family and social background.

Mr. Darcy explains to Elizabeth that ‘in vain’ he has ‘struggled’ to ‘repress’ his feelings towards not to love her’ he expresses his love for her unromantically and was less ‘eloquent on the subject of tenderness than of pride’. He talks about ‘his sense of her inferiority’ and the ‘family obstacles which judgment had always opposed inclination’.

He means that although he had loved her for a long time he knows that her family is beneath him. Mr. Darcy considered his wealth and status as ‘sufficient encouragement’ for Elizabeth to accept his hand of marriage. Elizabeth ‘could see that he had no doubt of a favourable answer ‘as he ‘spoke with apprehension and anxiety’ although his ‘countenance expressed real security’.

When Mr. Darcy first enters Elizabeth’s room, her ‘astonishment was beyond expression. She stared, coloured, doubted and was silent’. Then Darcy tells Elizabeth how much he loves her in spite of her ‘inferiority’ and her family’s degradation’. Despite of her ‘deeply-rooted dislike’ for Mr. Darcy, Elizabeth ‘could not be sensible to the compliment of such a man’s affection’. She is flattered when she realises how much he loves her and ‘she is sorry for the pain he was to receive, but she ‘lost all compassion in anger’ with his subsequent criticism of her ‘family’s inferiority’ while asking her to marry him.

As Mr. Darcy ‘spoke with apprehension and anxiety, Elizabeth’s ‘colour rose to her cheeks’, she refuses Mr. Darcy and says that she could not ‘feel any gratitude’ towards his proposal and she has ‘never desired’ his good opinion. Mr. Darcy is furious and looks at her ‘with no less resentment than surprise. ‘His complexion became pale with anger, and he was struggling for the appearance of composure’. He enquires ‘in a voice of forced calmness why she refused him ‘with so little endeavor at civility’

Elizabeth replies in a confrontational manner asking why he has spoken with ‘so evident a design of offending and insulting’ her by telling how much he loves her against his ‘will’, ‘reason’ and his ‘character’. She uses this opportunity to express how her feelings have been hurt by his insulting comment. Furthermore, she goes on to explain that even if his feelings had been ‘favourable’ she would never marry a person who has ‘ruined the happiness of a most beloved sister’.

Although Darcy changed colour at this moment, he showed no feelings of remorse and listens ‘with a simile of affected incredulity’ as Elizabeth explains how he destroyed Jane’s happiness by splitting up Jane and Bingley. Mr. Darcy admits that he did ‘everything in his power to separate his friend from Elizabeth’s sister and he adds ‘to him (Mr. Bingley) I have been kinder than to myself’.

This ‘civil reflection’ of Mr. Darcy, which she disdained, was unlikely to ‘conciliate her’. Elizabeth replies that Mr. Darcy’s interference in Jane and Bingley’s relationship was not the only reason for her bad opinion against him. She mentions what she had heard from Mr.Wickham. He responds to this ‘in a less tranquil tone and with heightened colour’. He answers that she taken ‘an eager interest’ in his concerns and Elizabeth accuses him of depriving Mr.Wickham, ‘the independence which was no less his due than his desert’. She is shocked by seeing Mr. Darcy speaking of him ‘with contempt and ridicule’.

Mr. Darcy’s says that ‘perhaps these offences might have been overlooked, had not your (Elizabeth) pride been hurt by my honest confession of the scruples that have long prevented my forming of any serious design’. This explains that he believes his honesty has made her reject him and asks her ‘Could you expect me to rejoice in the inferior of your connections? To congratulate myself on the hope of my relations, whose conditions in life is so decidedly beneath my own?’

Jane Austen comments to the reader that Elizabeth ‘felt herself growing angrier every moment’. However, ‘she tried to the utmost to speak with composure’. When she says to Mr. Darcy ‘you could not have made me the offer of your hand in any possible way that would have tempted me to accept it’, Mr. Darcy astonished by this remark and looks at her ‘with an expression of mingled incredulity and mortification’. She further comments that she disliked him from the very first time they met because of his ‘arrogance….conceit… self disdain of the feelings of others’.

Her ‘immovable dislike’ has made her feel that he was ‘the last man in the world’ that she ‘could be prevailed to marry’. After Mr. Darcy left, Jane Austen writes that Elizabeth cried for half an hour. It seems she felt it was ‘almost incredible’ that Mr. Darcy is so much in love as to wish to marry her in spite of all the objections which had prevented his friend (Mr. Bingley) marrying her sister. She feels it was ‘gratifying to have inspired unconsciously so strong an affection’ but Elizabeth condemns Mr. Darcy’s ‘abominable pride’ and ‘his shameless avowal of what he had done with respect to Jane’ and Mr. Darcy’s ‘unfeeling manner’ when he spoke of Wickham.

Jane Austen portrays how men and women in her times considered marriage through different characters in the novel. Mr. and Mrs. Bennet’s family especially shows that middle class women could not work; it would be seen as improper. Mrs. Bennet is desperate to get her daughters married to wealthy young men. This shows that parents were very much involved when it came to their daughter’s marriage and would play a large role in finding a husband.

Jane Austen views love as the foundation for a happy marriage. This view is mainly portrayed through Darcy and Elizabeth’s marriage and this is thought be the best marriage in the novel along with Jane and Bingley’s marriage because they are well suited and they are financially secure. Mr. and Mrs. Bennet, Lydia and Wickham and Charlotte and Mr. Collin’s marriages are viewed as bad marriages as their marriages lack the element of love that the other two good marriages have a plenty.

Jane Austen portrays that these marriages are bad due to lack of intelligence and wit that neither person has, the lack understanding and communication between each other in their married life. Lydia running away with Mr. Wickham without getting married was a big scandal in the novel. She was excluded from the society as she went against its traditional values of the society in those times. However, getting married reduced the shame slightly that was passed on to the family. Jane Austen shows the consequences that will occur to women who live together with a man without getting married.

Charlotte married Mr. Collin because she felt she was already a burden for her family and this would be a social embarrassment. Mr. Collins is Mr. Bennet’s closest male who will inherit his estate, which meant that he had definite financial security. This marriage shows that there was a lot of pressure on women like Charlotte from society. She is influenced to marry a man for financial security, protection and a house of her own. 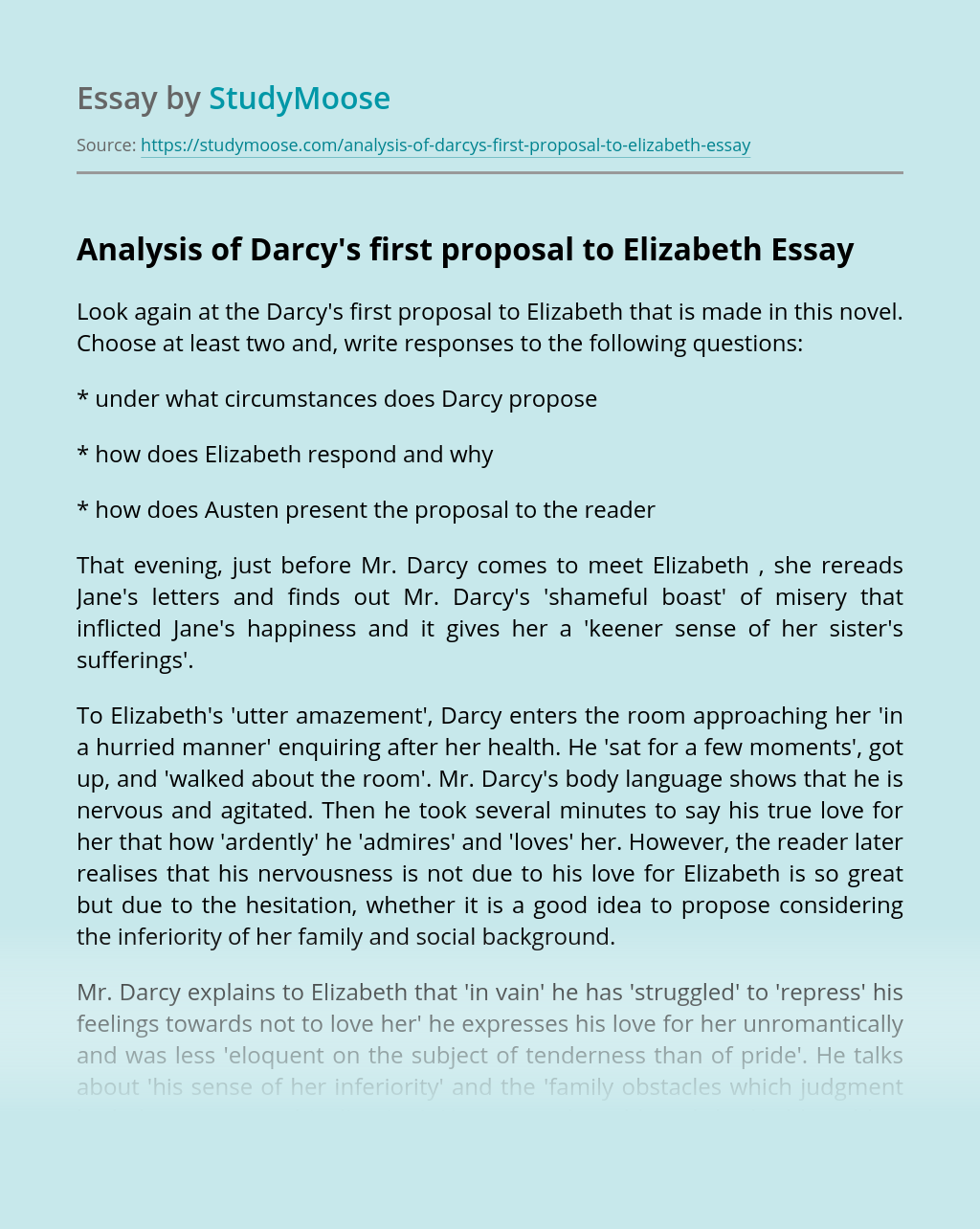 “Art is a jealous mistress.” Ralph Waldo Emerson’s quote easily summarizes “The Oval Portrait,” written by Edgar Allen Poe. It is a chilling tale, describing the two different passions of a married couple. The husband, a painter, requests that the wife let him paint her portrait, and in obeying him, she meets her doom. As...

Significant themes in Ethan Frome include silence, seclusion, impression, and the consequences that are the result of living according to the guidelines of society. Wharton depends on personal experiences to relate her thematic messages. Throughout her life as a writer, Wharton would arrange the time that she wrote around social engagements and she did not...

My Mother has just spoken with me about marriage to man called Paris. But ‘it is a honour I do not dream of’. I just cant believe that my parents want to marry me off so young, I was only considering it to keep my parents happy, but this evening changed my mind. I met...

The novel “Pride and Prejudice” by Jane Austen was set at the turn of the nineteen century, where women had little choice. Generally when reading this novel it may seem as if Austen is reinforcing or eroding sexist stereotypes of women. Rather than approving the stereotypes, she makes the reader aware of them through characters...

Tess, a wronged maiden troubled by her past, suppressed by the society, ultimately loses her life destroying her seducer. Hardy’s genius is reflected in the presentation of Tess and her experiences against the historical framework of nineteenth century England with its agricultural decadence, economic instability, religious and moral beliefs. She bears the responsibility of her...

Relationship in Novel The God of Small Things

India has been described as the “country over our shoulder”. To what extent does Arundhati Roy both explain and exploit the culture of Kerala for the English reader in ‘The God of Small Things’? In ‘The God Of Small Things’, as the reader we are introduced to a culture that we will ultimately struggle to...