In Pride and Prejudice, Darcy and Elizabeth first encounter at the ball in Meryton. Not such of a good impression they had on each other. Darcy’s first opinion is well understood as he says, “She is tolerable; but not handsome enough to tempt me.”(Page 8) As Elizabeth overhears his critical comment, she dislikes Darcy in that very moment for being so proud and full of himself. As Darcy is being convinced to dance with Elizabeth he accepts while she refuses.

Turn in your highest-quality paper
Get a qualified writer to help you with
“ Pride and Prejudice: Elizabeth and Darcy ”
Get high-quality paper
NEW! AI matching with writer

That is when Darcy gets his first insight of Elizabeth’s attitude. It came shocking to Darcy that Elizabeth refuses to dance with him; a fine young man who has such fortune and reputation.

Through conversation with Elizabeth, Darcy notices she is not like other women. At the time women settled for what was given to them for beneficial pretenses such as marrying a man of good reputation with a fortune. Eliza does not give herself out to Darcy, instead she speaks her mind not giving much importance to the disagreements others including Darcy, will have on her comments or opinions.

Darcy likes that she is not like other women, so in need of a husband. Unknowingly Darcy is being drawn in by her inner and outer beauty.

Darcy is a clever, proud, and demanding man as Elizabeth describes him. (Page 33) He considers himself superior to others who according to him were not brought up well and have such low connections. It comes naturally for Elizabeth to laugh at Mr.

Darcy for being so bitter and dull. Little by little he begins to show his emotions for Eliza as he becomes weak against her. Miss Bingley is one of the first to ever notice this weakness he has for her and tries to feed to his negative opinions of her and her family only letting him reveal that he had never met such a beautiful acquaintance as Eliza.

So it was, Darcy had completely fallen in love with Elizabeth and reveals his emotions to her thus at the same time insulting her and her family for being of such low class in comparison to him. Elizabeth becomes very insulted and refuses his proposal of marriage. Eliza says to Darcy, “Why with so evident a design of offending and insulting me you chose to tell me you liked me against your will, against your reason, and even against your character?” (Page 163) From this moment on, Eliza began to fall in love with Darcy as well.

It is evident that they are both completely in love with each other. Their relationship is most convenient to the Bennets while they have a daughter who will marry a man of great fortune that will as a result make them look good to society. Most importantly, Eliza is going to marry out of love rather than to settle for less as Charlotte did by marrying Mr. Collins whom she did not love but instead married for her own convenience. As for Darcy, not everyone is in such agreement that he marries such a woman as Eliza but yet their marriage is most likely to succeed knowing that the most important factor, love, is in place. At the end, Lady de Bourgh has no choice but to be in agreement of their marriage.

Pride and Prejudice: Elizabeth and Darcy. (2016, Jun 05). Retrieved from https://studymoose.com/pride-and-prejudice-elizabeth-and-darcy-essay 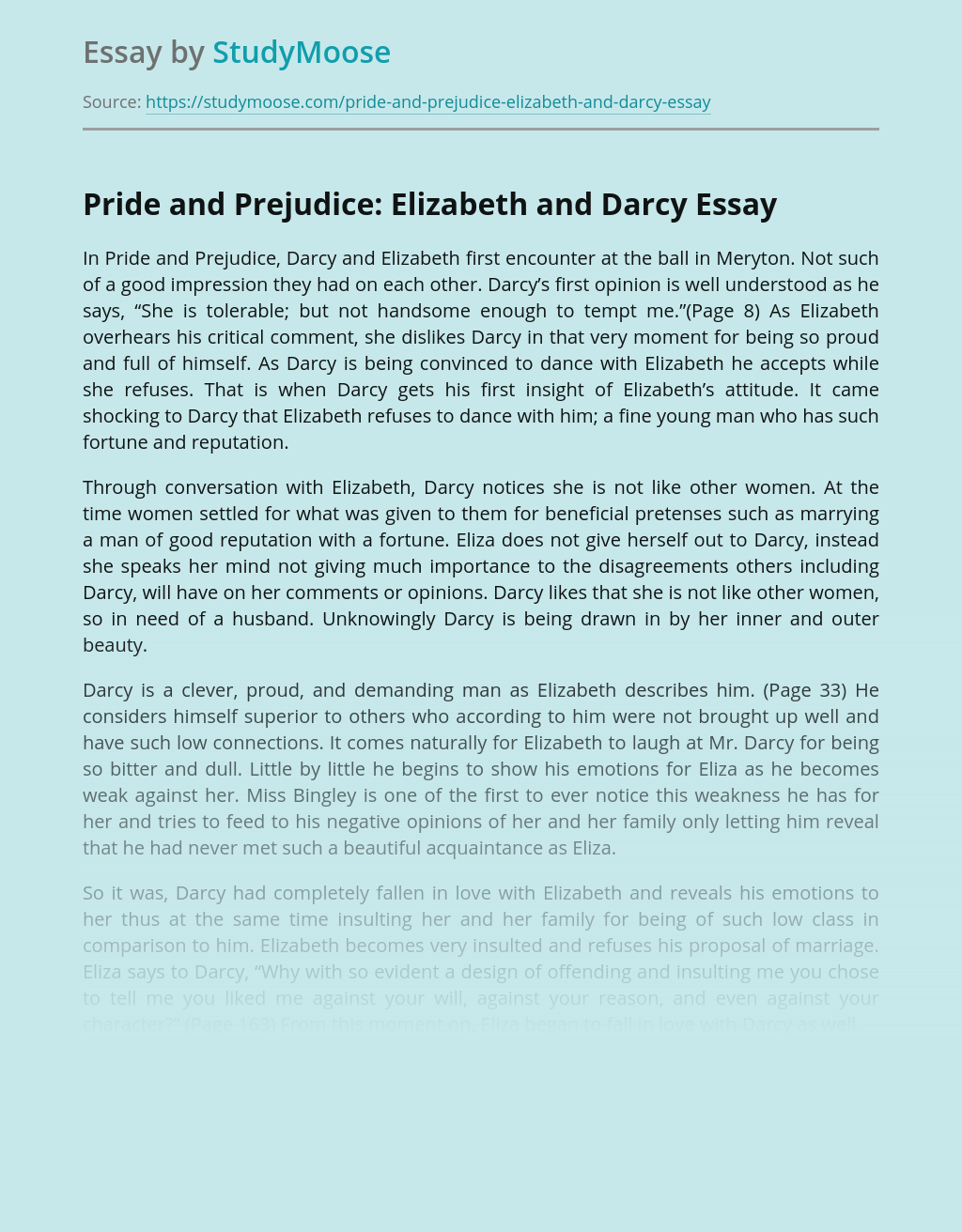 Turn in your highest-quality paper
Get a qualified writer to help you with
“ Pride and Prejudice: Elizabeth and Darcy ”
Get high-quality paper
Helping students since 2015
Stay Safe, Stay Original