Elizabeth Bennet in "Pride and Prejudice"

Individuality refers to the character or qualities which distinguish one person from another. Ones uniqueness constitutes a strong distinctiveness in his/her character. Thus, when this sense of character is juxtaposed against the concept of individuality, the mutual association results in the inherent emergence of a persons true identity. Although the distinguishing of separate individuals personalities remains admired in todays society, there existed a time in which the pursuit of uniqueness in character and personality was discouraged. This held especially true for women in Regency England in the 1800s.

Don't use plagiarized sources. Get your custom essay on
“ Elizabeth Bennet in “Pride and Prejudice” ”
Get custom paper
NEW! smart matching with writer

A woman in this time period, respectively the setting of Jane Austens Pride and Prejudice, endured numerous pressures and overwhelmingly strict rules from societal norms in order to obtain proper placement in society.

Women of the time most importantly should marry, and marry well, primarily to obtain the substantially vital possession of an exceptional reputation, and also to support their family and retain a good name. In addition, women held considerably inferior societal positions to men, having strict sociable allowances to only partake in balls, dances, and dinners.

These contribute to a woman acquiring a greater extent of connections, which in turn increases their chance of marrying well. However, Jane Austen does in fact present a character that ultimately triumphed over the particular stereotype of women in pursuit of her own ideals. Elizabeth Bennet, the protagonist and heroine of Pride and Prejudice, conveys a powerful sense of independence, remains very outspoken of her views, and a reason for marrying which all contradict the stereotypical woman of the time.

Elizabeth is an extremely atypical female for her time, for she invariably refuses to allow the loss of her individualism and personal identity in a society which encourages women to do exactly that.

Initially, Elizabeths attitude of independence induces her to act on the instinct of her unique ideals; her sense of self reliance eventually causing a mass of pride and prejudice to formulate around her thoughts and dialogue. No, indeed I do not wish to avoid the walk, for the distance is nothing when one has a motive; only three miles (28). Elizabeth acts in direct defiance towards her mother, and even though she expects to create a negative first impression, her own concerns (such as the well-being of her sister), prevail as a top priorities in her independent mind. She also walks alone, signifying the scarcity of independence exhibited by women of the 1800s, particularly towards situations that could potentially threaten ones reputation, such as Elizabeths walk in the mud. To such perseverance in willful self-deception Elizabeth would make no reply, and immediately and in silence withdrew, determined, that if he persisted in considering her repeated refusals as flattering encouragement, to apply to her father, whose negative might be uttered in such a manner as to be decisive, and whose behavior at least could not be mistaken for the affectation and coquetry of an elegant female (91).

In the thoroughness of Elizabeths dialogue, the author presents a tone of irritancy, for the protagonists self reliance on her own opinions could not sway Mr. Collins foolish assumptions. Through Elizabeth, the author also expresses heartily disdain of the inferiority of female roles of the time period, depicted by the occurrence of Mr. Bennet having to explain Elizabeths feelings instead of her effectively conveying them herself. I am only resolved to act in that manner, that will, in my own opinion, constitute my happiness, without reference to you, or to any person wholly unconnected with me (294). Essentially, this statement of Elizabeths to Lady Catherine demonstrates her fierce independence. She specifically states that her happiness is the only factor in the governance of her actions. Her self reliance and her own opinions create an independence which allows her to disregard the judgments of others no matter their social standing. Elizabeths independent mindset constitutes a very opinionated personality and character, which becomes exposed through remarkable dialogue.

Subsequently, Elizabeths outspoken nature causes consequently different interactions with people through dialogue, than would traditionally occur with a stereotypical female. I talked about the dance, and you ought to make some sort of remark on the size of the room or the number of couples (76). Normally, a person would not point out the faults in their dance partners manners. However, Elizabeths outspoken nature allows her to mock an individual of higher social consequence for his discomfited behavior. This interaction presents a fine example of Jane Austens ironic humor. Darcy remains silent at the ball in order to remain socially superior in his mind. However, he receives a lecture from a member of lower social standing, a woman no less, concerning manners and formal protocol. From the very beginning— from the first moment, I may almost say— of my acquaintance with you, your manners, impressing me with the fullest belief of your arrogance, your conceit, and your selfish disdain of the feelings of others, were such as to form the groundwork of disapprobation on which succeeding events have built so immovable a dislike; and I had not known you a month before I felt that you were the last man in the world whom I could ever be prevailed on to marry (159).

With none of the traditional politeness or subservience of her gender, Elizabeths reveals her unrelenting will to speak her mind in a situation of anger and in support of her feelings, which consequently humiliates Darcy. He became a victim to something virtually unheard of for a man of his social stature: an outspoken woman. Darcys formal and polite exit reinforces the importance that high society places in constant manners and obedience of formal protocol, portraying his now tentatively preserved sense of superiority. Lady Catherine seemed quite astonished at not receiving a direct answer (139). Elizabeth upon this instance speaks her mind in an incredibly daring manner. It seems that Elizabeth became the first individual ever to address Lady Catherine in that way, an exceptionally audacious stunt considering the old widows possession of so much dignified impertinence. Along with her outspoken behavior, Elizabeths marital ideals present themselves as the exact opposite of views expected to be held by women at the matrimonial age in Pride and Prejudice.

Furthermore, most women of Jane Austens time period viewed marriage as the ultimate goal in life, a wondrous aspiration to be attained for comfort, materialism, and social stature; Elizabeth exclusively declines to accept these ideals as governance for her own actions. It is a truth universally acknowledged, that a single man in possession of a good fortune, must be in want of a wife (1). This initial statement of Jane Austens masterpiece offers a miniature sketch of the entire plot, which concerns itself with the pursuit of single men in possession of a good fortune by various female characters. The preoccupation with socially advantageous marriage in nineteenth-century English society manifests itself here, for in claiming that a single man must be in want of a wife, the narrator reveals that the reverse is also true: a single woman, whose socially prescribed options are quite limited, desires a husband. However, Elizabeth criticizes the advantages and consequence of marriage in her society, such as whether or not one holds respect for their lifes partner, negatively portrayed by her parents.

Elizabeth fortifies these ideals in her declaration that “I am determined that nothing but the very deepest love will induce me into matrimony” (38). Due to the fact that Elizabeths extreme opinion of marriage comes as a response to Janes similar view, implications arise that Elizabeths point of view does not remain exclusively unique. However, closer examination of Janes character reveals that although love intrigues her aspirations, she would easily and appropriately succumb to societal expectations. Elizabeths outlook sets her far apart from the majority of women at the time, her position expressing that only love constitutes acceptable reason to marry.

You could not make me happy, and I am convinced I am the last woman in the world who would make you so (102). Elizabeth adequately proves her profoundly unique views of matrimony by the adamant refusal of two separate but exceedingly suitable marriage proposals. In Elizabeths position, to not marry Mr. Collins would put her in a very precarious situation financially, condemning all her family to certain disaster, and to denounce tradition for the sake of her principles seems foolhardy but also requires a fair amount of mustered courage. In absolute liberation from the female stereotype she rejects the proposal of Mr. Darcy (likely the richest man she is ever to meet) as well revealing a complete disregard for societal norms and her prescribed role as a woman.

In conclusion, Elizabeth Bennets character intrigues many, unique individualism plainly setting her far from the stereotype of her gender. Throughout Pride and Prejudice, several references enlighten every fine attribute of Elizabeths remarkable character. Her interactions throughout the novel quite clearly depict her as an extremely atypical female when juxtaposed against the norm of her gender, during the distinctive period of Regency England in the year 1813. Through her independence and defiance, clearly outspoken nature, and inimitable ideals concerning matrimony, Elizabeths character undeniably challenges the stipulated roles and formal protocol of the women in her time period. She remains principled and unshaken by the overwhelmingly strict expectations of society. Her every action becomes governed by assurance of her happiness alone, while decisions too depend exclusively on her own sense of correct choices.

The character of Elizabeth Bennet provides inspiration for many modern women to develop a sense of courage and confidence, demonstrated by her determined will to speak her mind in effort to support certain unique principles of marriage. Elizabeth figuratively compares with Frodo Baggins of Lord of the Rings, by being dragged into a quest in which a ring is central. In marrying Darcy, she overturns the social hierarchy by taking a husband who remains considerably superior in social class. Using her newly enhanced opinions to understand what constitutes a happy (as well as proper) marriage on her independent terms she makes certain of her true happiness, concluding in final contentment that she will now never desire to discard her ring into Mount Doom.

Elizabeth Bennet in "Pride and Prejudice". (2016, Jul 29). Retrieved from https://studymoose.com/elizabeth-bennet-in-pride-and-prejudice-essay 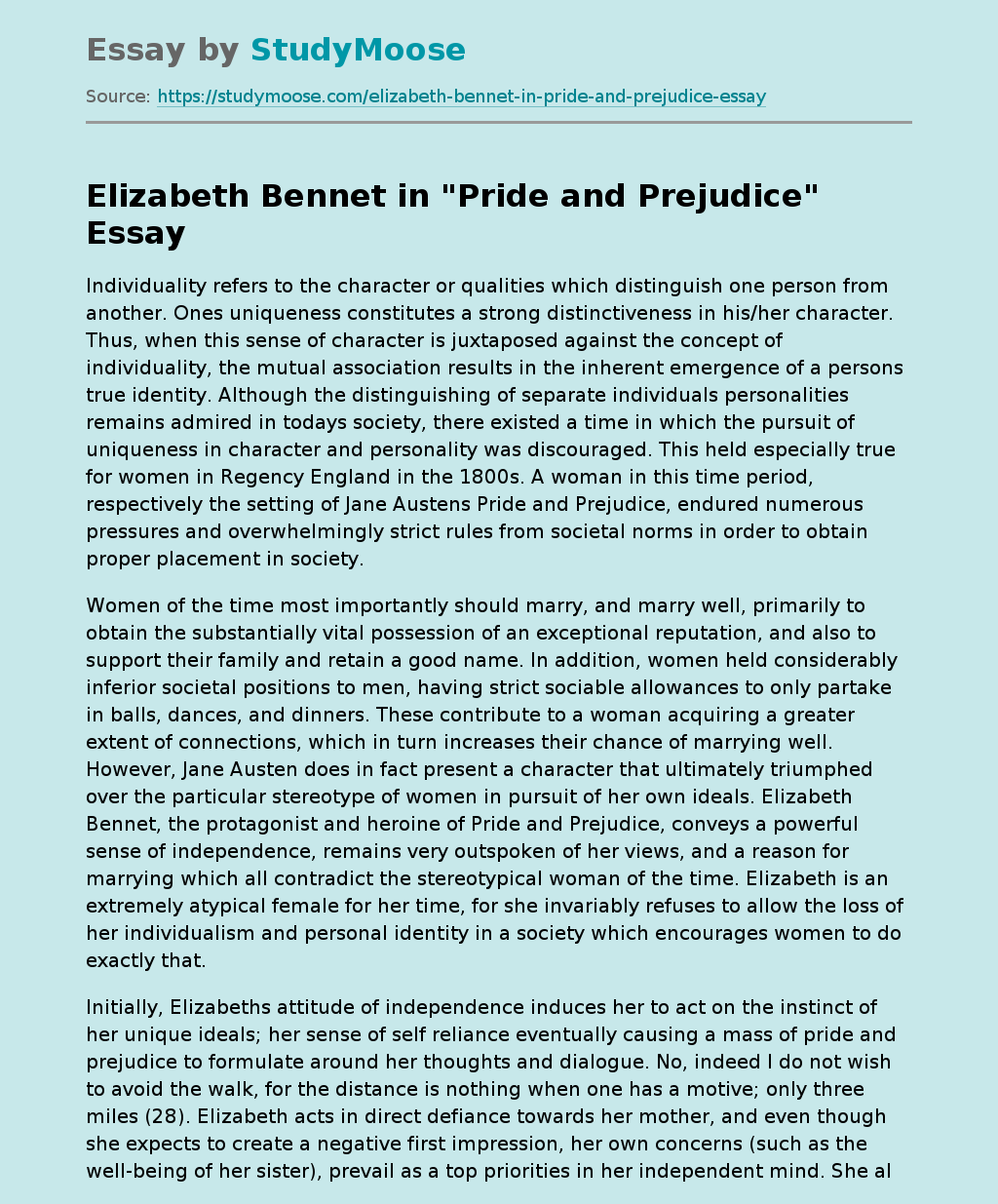