More than a change of One LetterThe film, Pride and Prejudice directed by Joe Wright, had more of a natural tone setting and feeling to it. The scenery really draws the audience in by nature and the assumed innocence of the characters. Bride and Prejudice directed by Gurinder Chadha, is considered to be a Bollywood style movie. Bride… had a complete makeover of Pride… with an Indian traditional style twist. The main characters in both films were Lizzie (Lalita in Bride…) and Darcy.

Both films were shot on location in the United Kingdom; with a few shots of Bride… shot in the United States. The director used a lot of colors and symbolism in this movie. After reviewing both films, the claim about marriage became very evident that marriage can be beneficial to everyone involved.

Women of the society in Lizzie and Latlita’s time were greatly disadvantaged compared to men. These factors put the women in a situation were they had to find a wealthy man who then becomes their economic salvation.

Marriage was a condition which was seen as the most important act in a women’s life in their society. The woman was seen as being successful if she was married to a wealth bachelor. The unmarried women were considered of lower status to married women and were doomed to the unhappy life of being a governess. The prime example of this would be the marriage of Charlotte Lucas and Mr. Collins in Pride…. Charlotte is in a frantic need of financial security that she is willing to obliterate her own life by marrying a arrogant butthole like Mr.

Charlotte knows she is not getting any younger, so her chance of marriage is slim to none. She knew that Mr. Collins was her last chance. She married for status and went in with her eyes open. She hopes that with his character, connections, and circumstances, that her chance of happiness with him is fair (Pride…). Clearly there is no love between them. Charlotte suffers in tormented silence in her marriage and can be seen when she and Mr. Collins went to visit Lady Catherine. Lalita had a friend to marry a native Indian that now lived in the United States. Her marriage was the same as Charlotte’s. She married him for the benefits, not for love.

The marriage between Lydia and Wickham is seen as a false marriage because it is purely based on passion; there is no reason behind their relationship. The passion came from lust, good looks, and youthful energy. This marriage is another ploy to show how important marriage was to the people in that society. Lydia and Wickham had created a shocking scandal that reflected on Lydia and her family. The only way that she and the Bennet family could redeem their respect was for Lydia and Wickham to get married. The major conflict of this union is if Wickham decided leave her and marry someone else, Lydia would have been disgraced and would never be thought of as marriage material again.

The marriage between Darcy and Elizabeth reveals the characteristics which constitute a successful marriage based on love and desire. Elizabeth is an example of a woman who does not believe in marrying for money or passion. This is shown by her turning down Mr. Collins proposal which would have insured her financial security but not happiness. “I am perfectly serious in my refusal. – You could not make me happy.” (Pride…) One of the uniqueness of the success of Elizabeth’s and Darcy’s marriage is the fact that they had the time to get to know each other. It was not a rushed married like that of Lydia and Wickham’s but was rather one of mutual understanding, respect and love. This marriage shows the importance of fully knowing one’s mate before marriage.

Jane and Bingley’s marriage represents a healthy marriage. Jane was very much a lady and desired to be pursued. She did not run after Bingley when she thought he had moved to London permanently. Jane and Bingley also had the period of courtship where they got to know each other and realized that they were compatibly. Their mutual understanding and similarities was the foundation of their relationship and will lead them to a happy and everlasting marriage.

Another marriage that sticks out to me is the one of their parents. In both films, the mothers were very over bearing. It is apparent that their marriages were arranged. There seemed to be no affection, love or emotions towards one another. This is a good enough example for Jane and Lizzie to want more out of their marriages. The husbands learned quickly to be quiet when it came many different affairs. The father in Pride… remained quiet until he could not take it anymore and had to defend his daughter’s honor.

These five marriages contribute to understanding that a happy and strong marriage takes time to build and must be based on mutual feelings and respect. Hasty marriages acting on impulse, and based on superficial qualities will not survive and will lead to inevitable unhappiness. In Pride and Prejudice, Austen has denounced the elements of marriage that she found distasteful, affirming that a loving and committed relationship is privileged in her eyes. Perhaps, this is the reason she never wed, for she was not at a loss for suitors. Did she spend her life waiting for her one true love that never appeared? 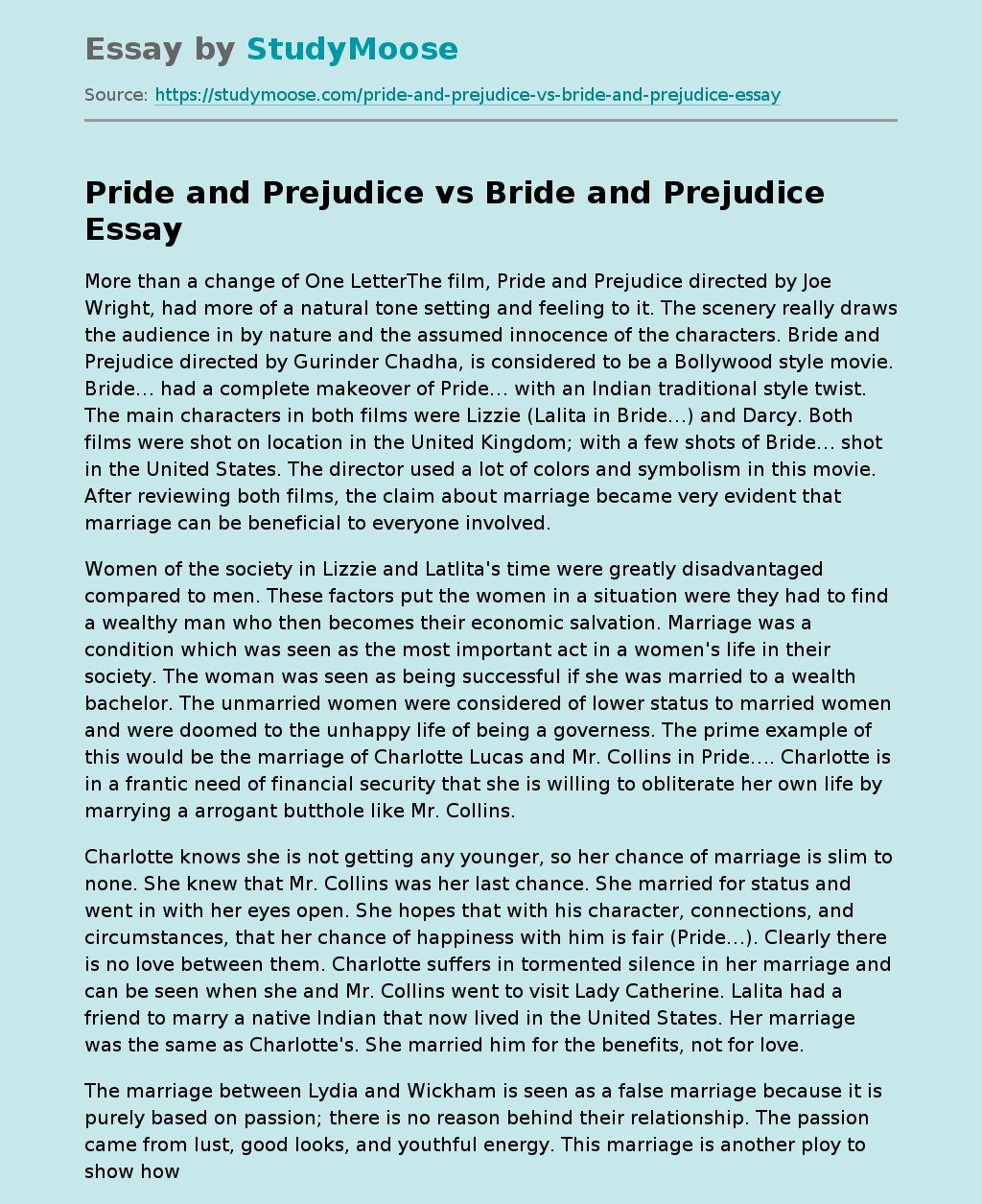