Gender Analysis of "The Tigers Bride" by Angela Carter

The short story_The Tigers Bride_ raises thought provoking concepts around gender through a plot both alike and unlike traditional Beauty and the Beast. The role of both genders is explored and true freedom questioned within the bounds of society. The text delivers a powerful and even handed message to the genders that constraints are merely a construct, a mask which can slip and shatter when pressure is applied.

Angela Carter sketches a bleak setting, and equally bleak outlook for the female protagonist, caught in a powerless, debased and objectified position of social standing.

Turn in your highest-quality paper
Get a qualified writer to help you with
“ Gender Analysis of “The Tigers Bride” by Angela Carter ”
Get high-quality paper
NEW! AI matching with writer

Agency is firmly placed with The Beast, and the father, opening with the line; ‘My father lost me to The Beast at cards’. Objectified from the outset for her beauty, the narrator is declared a ‘treasure’ by both men and a ‘pearl beyond price’ by her father. The barb is deepened with Christmas, the day of items named as the day of her birth. Her nickname ‘Christmas rose’ gives rye commentary on the traditional symbolism of the rose, which re-emerges later stained with her blood, representing the loss of innocence at the hands of the patriarchy much as her mother before her who ‘did not blossom long’.

Despite her predicament the narrator represents herself and her gender atypically to binary stereotype with a cynicism and wit that cuts through the flaws of the hegemonic dominated society around her. Receiving a rose from The Beast, she calls it ‘unnatural and out of season’ and tears it apart whilst being bartered as an object in the card game.

Her disdain for her predicament and surrounds are powerless in these early stages and are blended with a sadness ‘you think there is no winter but forget you take it with you’.

The narrator fast becomes a heroine to the audience, through a nurtured appreciation of her budding inner strength. This is emphasised by the stark contrast to the insipidness of the father and veiled vulnerability of The Beast. The windup soubrette doll becomes a leading symbol of the dehumanising ideals of society on the female gender with the heroine likening herself to the doll, initially. The valet’s statement ‘surrounding ourselves for utility and pleasure with simulacra is no less convenient than for most gentlemen’ casts light on the hegemonic expectation of society.

However the heroine’s character grows in strength with every denial to The Beast and her rejection of society’s expectations of ‘her skin as her sole capital’ she acts on this through her rejection of the gifted diamond earrings. Role reversal occurs when The Beast himself unclothes in vulnerability ahead of the heroine. Transformation is near complete when she views the soubrette in a new light and intends to send the doll back to perform the stilted role of father’s daughter, realising that true freedom from the limitations of society means shedding and joining the ‘beasts’.

The text proposes that gender constraints are a construct and are not limited to the suppression of female power. The bounds of society on The Beast and his estate are also evident and ironically his visage, scent and abode is criticised by the heroine as failing to comply with expectations. Her animosity towards The Beast is likely birthed in her predicament, his mask a reminder of the too perfect hegemony she detests.

However The Beast conducts himself with a subtleness and dignity that can be afforded to no human in the story. Contrasting The Beasts behaviour with the character of the father or the viscous rumours of the nursemaids highlights the authors point that the limitations gender and society have created hamper the full potential of character. The Beasts compassion and coyness suggest an inner subordinate or complicit form of masculinity, the hegemonic persona forced, donned as disguise to conform.

The story outlines an ideal place; ‘nothing human lives here’, a place where identity is essential to being not performed as a requirement. The message is bittersweet; the escape to freedom in a new skin is a relative exile from society; a clear rebuke to a society which forces such drastic methods upon the genders to avoid cultural ideation.

Gender Analysis of "The Tigers Bride" by Angela Carter. (2016, Aug 08). Retrieved from https://studymoose.com/gender-analysis-of-the-tigers-bride-by-angela-carter-essay 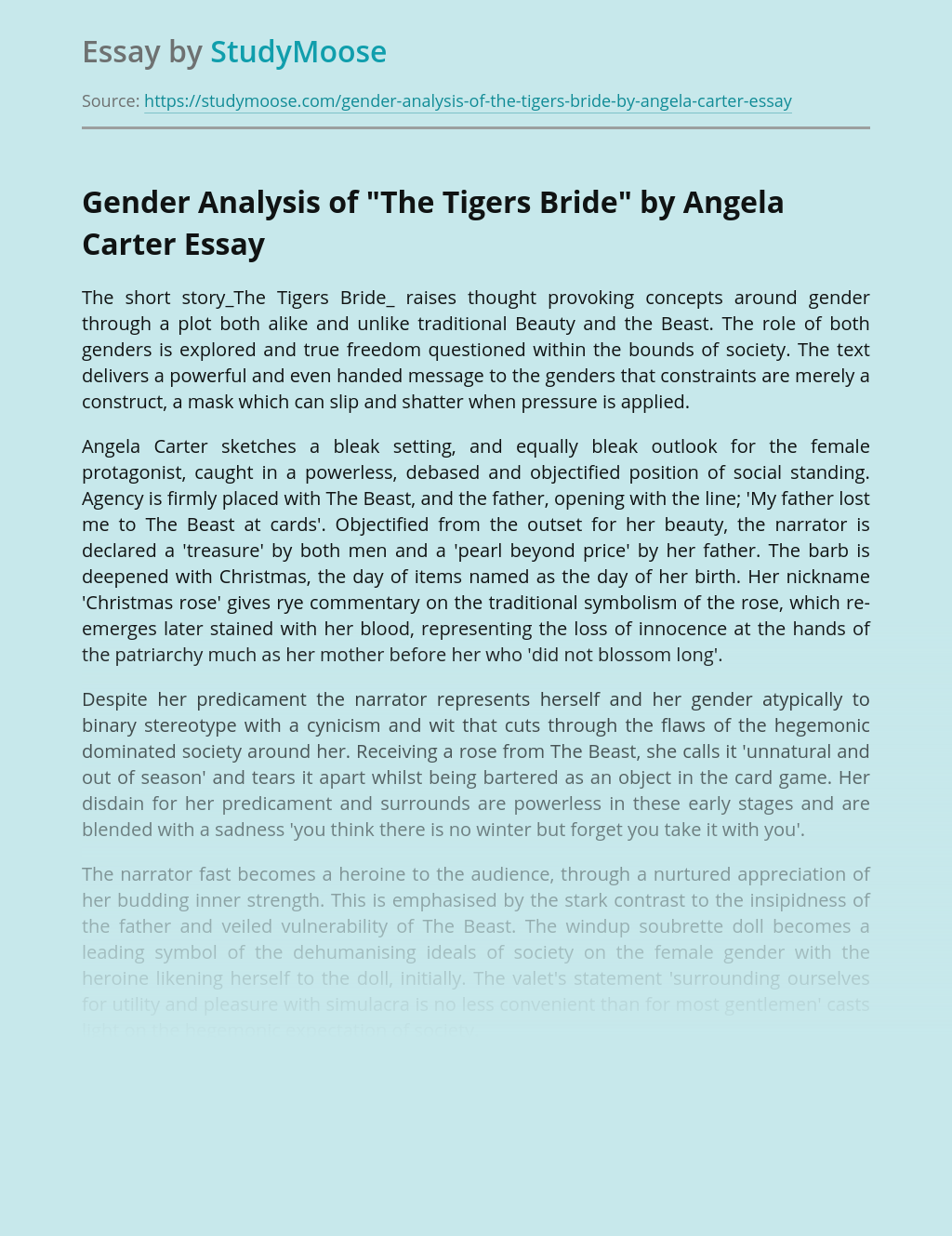 Turn in your highest-quality paper
Get a qualified writer to help you with
“ Gender Analysis of “The Tigers Bride” by Angela Carter ”
Get high-quality paper
Helping students since 2015
Stay Safe, Stay Original