Coach Carter wasn’t your average coach. He was also a teacher and mentor for these young boys. He gave these boys a sense of hope in life that no one ever gave them. The book has sold over 3 million copies. The movie has made approximately 42 million dollars as a movie. Coach Carter novel and film both proved to be a huge hit all over the world, but most important to people who enjoy basketball and love the game. While I was reading the book you could clearly see that the movie and the book plots are relatively similar, but their are a few minor differences between the book and the movie.

“Coach Carter” movie was an excellent representation of the book, but had a few modifications in order to clarify several concepts of the book which was written by Jasmine Jones. To interpret this idea, Coach Carter movie was altered so the viewers could understand the ideas that Jasmine Jones wrote, and also the viewers could understand the movie perspective side.

This is where we see many difference arise. To illustrate this point, this book was written as a whole. What I mean by that it had a lot of first person narrative between the characters. (Coach Carter, Ken Carter, Kenyon Stone and the rest of the basketball team.) When watching the movie there are several voice overs over the characters in the movie. This is where their are different lines that fit with what the characters are saying, but there’s no way of showing it when you are reading the book.

Although in the movie there are several types of voice overs the actions that the characters use to incorporate into the movie doesn’t really follow along the same lines with what they are saying in the book but has that general idea to it.

This is clearly shown that you can’t see what the different type of actions or movement when you are reading the book. This leads to my next point, Mr.Carter was trying to teach the boys good values. Respect, discipline, responsibility and commitment. Their boys were great ball players but on the other hand was not keeping up in their own education. There are several cut scenes showing the basketball gym and seeing each individual player practicing or even a live game going on. The cut scenes that were incorporated in the movie were much different to the book the reason being is that not only the book is followed the exact same way as the movie there are always minor differences. Although you can’t see it visually by reading it and understanding the settings between the book and movie there are major differences between the two.

On the other hand, The Coach Carter Book and the Coach Carter movie similarities were unquestionable. “His own son which he has placed at St. Francis, who would rather go to Richmond High so he can play for his father (Coach Carter). This places a hard decision on Coach Carter and has a big affect on both him and his family. It creates arguments and some tension between father and son. Coach Carter being the main teacher in the film that is strict and formal, with some of his actions proving to have both good and bad results. His son did end up going to Richmond High school as the author states it in the book and which was shown in the movie. In the book and movie there were a lot of plots that corresponded with the book and movie. Coach Carter being the main character is set in Richmond, California in the USA. It focuses on an inner-city public school called Richmond High, which is in a very low-like status and has a reputation for not having many students go off to college.

Most of the scenes were based of this high school and most importantly took place in this area and high school. The detail in the movie was outstanding to be more specific the detail the court had, it had that shine to the court to make it more authentic and the area that they it was located. But most importantly the characters that took place in the book and movie. Although you can’t visualize the looking of the characters by understanding the detail the author has said you can really see the similarities. In the book and movie there was a lot of school failure. In terms of not meeting the requirement, on average each player who played with Richmond high school their average was a 2.3 gpa. Mr Carter (The Coach) wanted a 3.5 gpa. This grade level had to be reached or if not he would close down the gym and stop them from playing basketball. 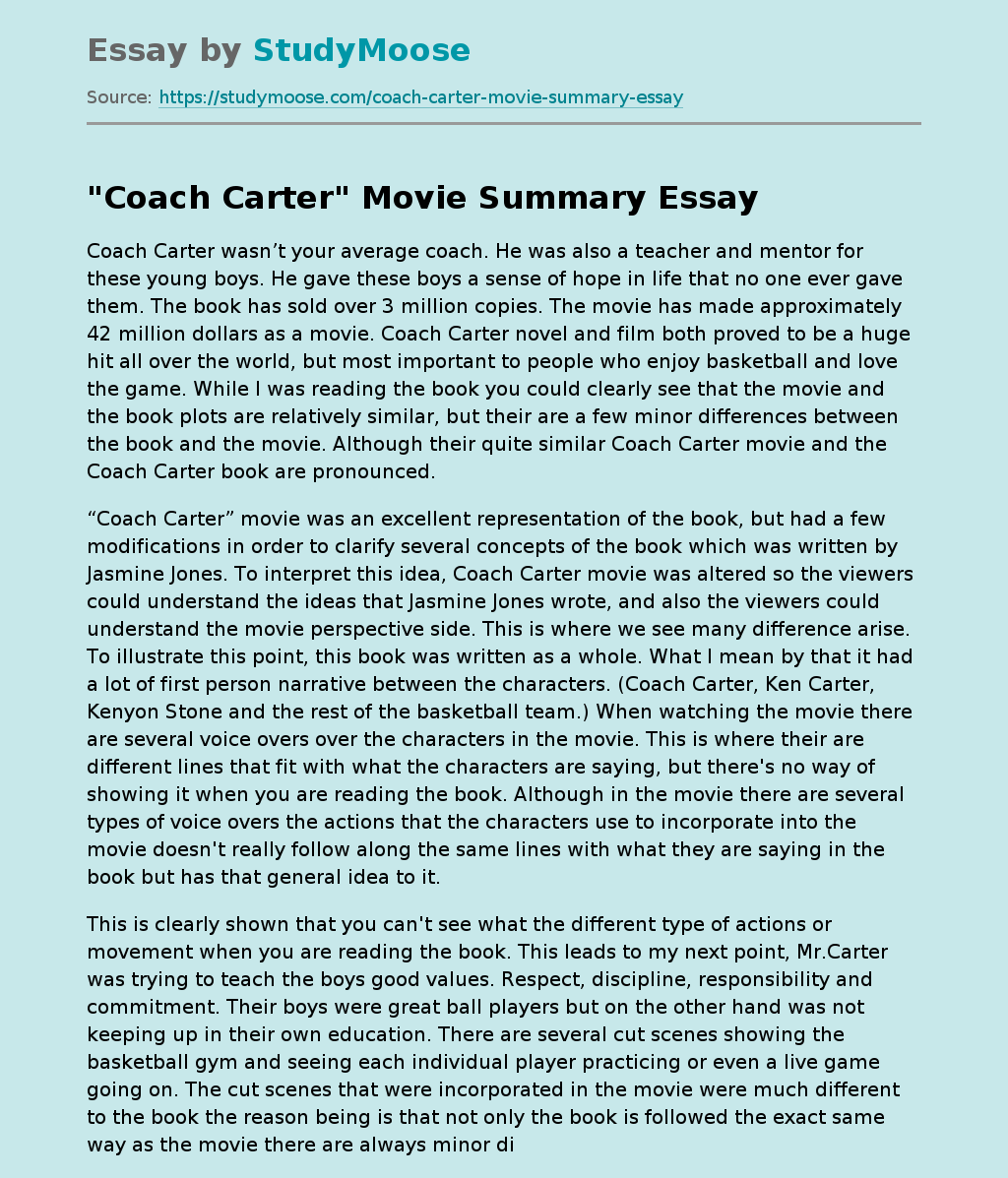