A Review of the Movie Coach Carter

While some players refuse to even attempt to meet these new standards, those who stay find themselves capable of, and dreaming of a future that had never once entered their minds. The following is a brief review of the challenges faced by both coach carter and his team, and the decisions and methods made and used by the coach to press his team on to success both on and off the court. Summary First we will quickly assess the challenges faced by Ken Carter as a coach and leader to this group of young men.

Don't use plagiarized sources. Get your custom essay on
“ A Review of the Movie Coach Carter ”
Get custom paper
NEW! smart matching with writer

He inherits a team of selfish, showy players, concerned only with their own stats and not doing the little things it takes to make the team a winning one. He moves into a school that seems to be supportive of the idea that these kids have no future beyond highschool and that the boys should be allowed to enjoy this temporary releif from a life where there are 4 times more likely than to go to college.

The students alost have issues outside of school with one player looking at potential fatherhood and another player involved with gangs and drugs.

If this was not enough the coaches own son transfers from a private prep school in order to play for his father. A basic breakdwon of these challenges into more generic ideas would look like this. The leader moves into an organization where those underneath him have no respect for his or the organizations values. There is no strucure in place for their success both individually or corporatly.

Those in positions above him seem indifferent to the problems facing their charges, they are just trying to make it through the day.

Also, there is a possible challenge of dealing nepotism in regards to showing favoritism towards his own son. In order to deal with these many issues Coach Carter had to instill his own strucure from the very beginning. To be firm in his convictions and actions while maintaining the compassion that would be needed to break down the walls of his players. If he were to waver at all the players would jump on him and his cause would be lost in an instant.

These players had no stability in their lives outside of the gym, so it was critical to his and their success that there was something they could cling to no matter how turbulent their lives may be. They key to all of these issues was respect. The players had no respect for the game, their coaches, or themselves. In order for them to change, they had to understand the value that he placed on them and to understand that he saw things in them that they had not bothered to look for. There were so many variables outside of Ken Carters control.

Turbulent home life, pressure to make it out of an economically depressed area, and the lack of cooperation from the students teachers and administration where lying in wait for the coach. Not only were their outside issues but there was also issues within the team. Lack of talent was not an issue however which helped to spur the team on to success once the proper structure and motivation was put in place. The players he was charged with leading bickered amongst themselves, ignored the previous coach, and disrespected the game and their opponents while being more concerned with their own pride than winning the games.

From the beginning the goal for Coach Carter was to focus on the wellbeing of the students, to make them winners, not just on the court but in life. He imposed strict standards and when the students failed to meet them they were met with harsh consequenses, incudling being suspended from the team and the entire team being locked out of the gy muntill their grades improbed. He put himself on the line as coach to back up the idea that he was more concerned with their progress as men and students than on their success as bsketball players.

While demanding respect and dealing swiftly with indescretions by his players he also displayed compassion towards these young men, allowing them to work their way back onto the team, and bringing one player back twice after his cousin was chot in front of him in a drug deal gone bad. The focus on this movie was on the development of the players as people more than the basketball teams success, however the systems put in place by Coach Carter for both paths ran paralell to one another. He began with the basics, conditioning and fundementals on the court, respect and discipline in life.

Moving on to offense on the court and thinking about the future in real life. This was done on both ends to prove that what sets you up for success in the future is the decisions and habits that you implement today. The things that take the hardest work most often offer the greatest rewards. Application So what can I take from this story as it relates to my future in both coaching and athletic administration. The biggest concept that i have taken from this movie is the idea of respect and discipline. To have respect for the players i lead and the organizations within which i am given responsibilities.

To lead those under me to an understanding of both their intrinsic and extrinsic value and to press them towards growth within and outside the confines of sports and careers. Finally the concept of discipline as a means to freedom. To work so hard on the foundation of excellence so that when the moment comes to leap forth and seize the goal, no thought will be given to the long hard hours of training and work, but the ingrained habits will propel us upwards to the realization of excellence in all our endeavors.

A Review of the Movie Coach Carter. (2018, Oct 31). Retrieved from https://studymoose.com/a-review-of-the-movie-coach-carter-essay 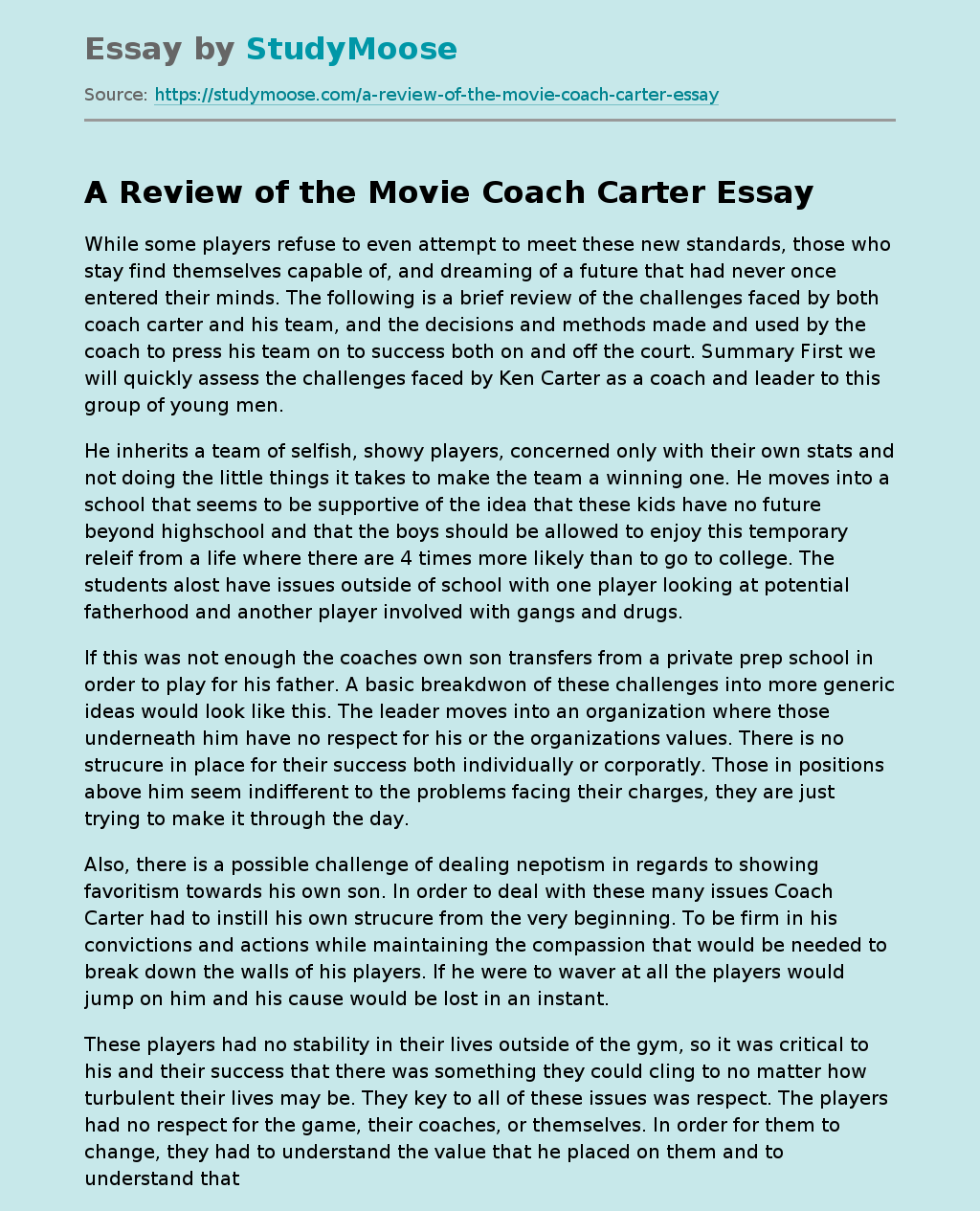