Sports psychology deals with the mental and emotional aspects of physical performance. It involves describing, explaining and predicting attitudes, feelings and behaviours in an attempt to improve performance. In the film ‘Coach Carter,’ directed by Thomas Carter, sport psychology is used effectively to enhance the performance of a high school basketball team. However, this improved performance is not limited to the basketball court, it extends into the classroom where the students use goal setting, motivation, concentration and confidence control, ultimately to become accepted into college, avoiding a life of drugs, gangs and prison.

Don't use plagiarized sources. Get your custom essay on
“ Sport Psychology in the Film “Coach Carter” ”
Get custom paper
NEW! smart matching with writer

In the film, many sport psychology techniques are used to turn the immature teenagers of the Richmond Oilers basketball team into a group of intelligent, successful young men. The most important technique is goal setting. All good athletes set goals, otherwise, they can spend a long time doing the wrong training, learning the hard way, getting bored or taking longer than needed to improve. Athletes with goals set themselves targets and a plan to achieve them, their training involves less trial and error and it becomes an effective learning tool.

When setting goals, Coach Carter implements the SMARTE principle. The goals are specific, straightforward and emphasise what he wants to happen.

Eg; players must wear a tie and jacket on game day. His goals are also measurable, this aspect allows Coach Carter to see his athletes improve, eg; the teachers supply him with student ‘progress reports.’ Coach Carter’s goals are attainable and realistic, setting goals too far out of reach are difficult to commit to. This is why he doesn’t ask his players to be at the front of the class when it comes to grades, but simply to sit at the front of class to maintain focus. Many of the goals Coach Carter sets have a timeframe.

If a timeframe is not set, the commitment is too vague. It tends not to happen because the athlete feels he can start at any time resulting in no urgency to take action. Eg; when Cruze attempts to get back on the team he must complete 2500 push ups and 1000 suicides “by Friday.” Coach Carter may also evaluate his teams’ goals and change his coaching techniques to suit. This is evident when he decides to ‘lock up’ the gymnasium, forcing the team to improve their grades before returning to the court.

While Coach Carter’s use of the SMARTE principle is very effective for setting and achieving goals, one aspect, that of individuality, could be improved. Coach Carter makes the entire team sign contracts in which the terms are the same for everyone. While a 2.3 grade average may be a perfect challenge for some players, others may benefit more so from aiming towards an average of 2.7. Perhaps Coach Carter could take a lesson from John Howard and put his players on individual contracts.

A significant sport psychology technique used is motivation. In the film, Coach Carter implements both extrinsic and negative motivation. Extrinsic motivation is the desire to perform well, being prompted by external or outside forces. Coach Carter asks some attractive young girls if they would go to the library while the boys are learning. This is their reward for studying hard while another extrinsic motivator, the state championship, is the reward for winning basketball games. Extrinsic motivators have pros and cons; they will increase immediate performance, but will have a harmful effect on subsequent performance when a reward is not offered. Additionally, when the promise of a reward is broken, there will be an even greater decrease in performance.

Negative motivation is also used heavily by Coach Carter. Negative motivation is an incentive through fear of not performing to expectations and the consequences. When the athletes turn up to training late, they run. As well as negative motivation, negative reinforcement is present in the scene where Coach Carter is giving statistical feedback to his athletes. “Mr Worm, you were five and four… five turnovers and four missed free throws.” As a result of these errors, Coach Carter decides to add an extra practise session every morning at 6am to teach his players the fundamentals of the game.

Behaviour becomes either more or less likely depending on its consequences. The theory is that if you reward behaviours they are more likely to occur again, while punishment is more likely to reduce the chances of that behaviour occurring in the future. Coach Carter successfully uses negative motivation, however, positive motivation is rarely used and sport psychology research overwhelmingly supports the use of a predominantly (80-90%) positive approach. (Peak Performance issue 214) That said, the negative approach works very well in this situation as it teaches the athletes to make decisions on their own behalf, after which they must live the consequences. This approach doesn’t allow the athletes to be ‘babied,’ preparing them well for college.

A significant sport psychology technique used by Coach Carter is concentration. Concentration is the ability to link movement and awareness to the extent that the individual can focus on doing, rather than thinking about doing. Too much thinking can clutter the mind. In basketball, a player can hesitate and lose a good playing opportunity while deciding which option to take. In the film, Coach Carter teaches his players to concentrate on one aspect of the basketball game at a time by calling out key words. He also adds an anecdote to the words so the players are able to remember more easily what they mean.

These key words either represent a play or a certain type of defence or offence Coach Carter wants his athletes to implement and concentrate on. An example is “Dianne,” an ex-girlfriend of his who “was always on his case about every little thing.” Therefore, Dianne is the key word for “man to man pressure defence.” The use of key words such as this is very effective in the movie and in sport today, as they act as a trigger in the athletes’ mind, reminding them to concentrate on what has to be done. However, all of Coach Carters key words are women’s names, this could get
confusing. Perhaps he could use words that are more distinguishable.

Another sport psychology technique used by Coach Carter is visualisation. However, this technique is not used nearly as much as it could be. Visualisation is the process of creating a mental image or intention of what an athlete wants to happen or to feel. Grant Hackett, current 1500m freestyle Olympic champion describes how he uses visualisation; “I picture myself on the way to success, mentally rehearsing each step in detail. I concentrate on the difficult moments and make each action perfect. I use all my senses to summon and experience this new reality. I see, hear, smell, taste and feel myself in the desired situation. Then I imagine I’m in a situation in which my wish has been fulfilled and I congratulate myself on the success.”Coach Carter does not use visualisation enough.

Although he tells his team “you have to have a vision” and asks them “where do you see yourselves?” he doesn’t follow these thoughts through in order for them to be effective. So when Junior replies; “ESPN baby,” Coach Carter does not ask him how he intends to get there, or ask him to use his senses to see, hear, smell, taste and feel himself in the desired situation, in the same way Grant Hackett does. If Coach Carter did ask these questions, he could work with Junior to set individual goals, in which they devise a plan on how to make Junior a future star of the NBA. If this were done, Junior would then have an intrinsic motivator to help him achieve his goals. Another perfect opportunity for Coach Carter to use visualisation is when he says “College, that’s a viable option for all of you, but you have to perform in the classroom to have that chance.” Upon saying this, he should ask his athletes to create mental imagery of playing college basketball, but he fails to do this.

An important sport psychology technique used by Coach Carter is controlling confidence. Overconfidence is confidence that is not based on ability, it may be caused by vanity, ego, or positive thinking and imagery that is not backed up by ability. Wayne Bennett, coach of the Brisbane Broncos Rugby League team, describes overconfidence in his book; ‘Don’t Die With the Music In You’ as “dangerous.” He says it “can set a footballer up for serious failure, devastating the required self-confidence he should posses.” Like Wayne Bennett, Coach Carter knows it’s important to stop overconfidence in its tracks. When Coach Carter witnesses his team getting to confidant, he immediately follows through with negative reinforcement; “since when is winning not enough, you owe me 500 push ups a piece.”

Another example of Coach Carter bringing the confidence levels of his athletes down is when he says to Timo Cruze; “You know your task is impossible… give up, go home.”Coach Carter’s methods of controlling confidence are excellent. During a training session, he replicates the actions of his players; “see that bow, I tied that! I tied that!” This shows them how silly and unnecessary it really is. Also, by getting to the players’ overconfidence early they do not take a win for granted over players who are smaller, weaker or less skilled than they are. Even more importantly, they do not lose to an easy opponent and the self-confidence they should posses, described by Wayne Bennett remains.

The sport psychology techniques; goal setting, motivation, concentration and confidence control, used by Coach Carter in the film sufficiently improve the performance of the Richmond Oilers Basketball team both on and off the court. There are more techniques however, such as individual goals, visualisation and intrinsic motivation that could have been used and others that could have been used more effectively. Although the young men in this film are troubled, sport psychology is not just for ‘problem athletes’ or ‘problem students’. Sport psychology and its training is for anyone who wants to improve his or her performance, in any arena. 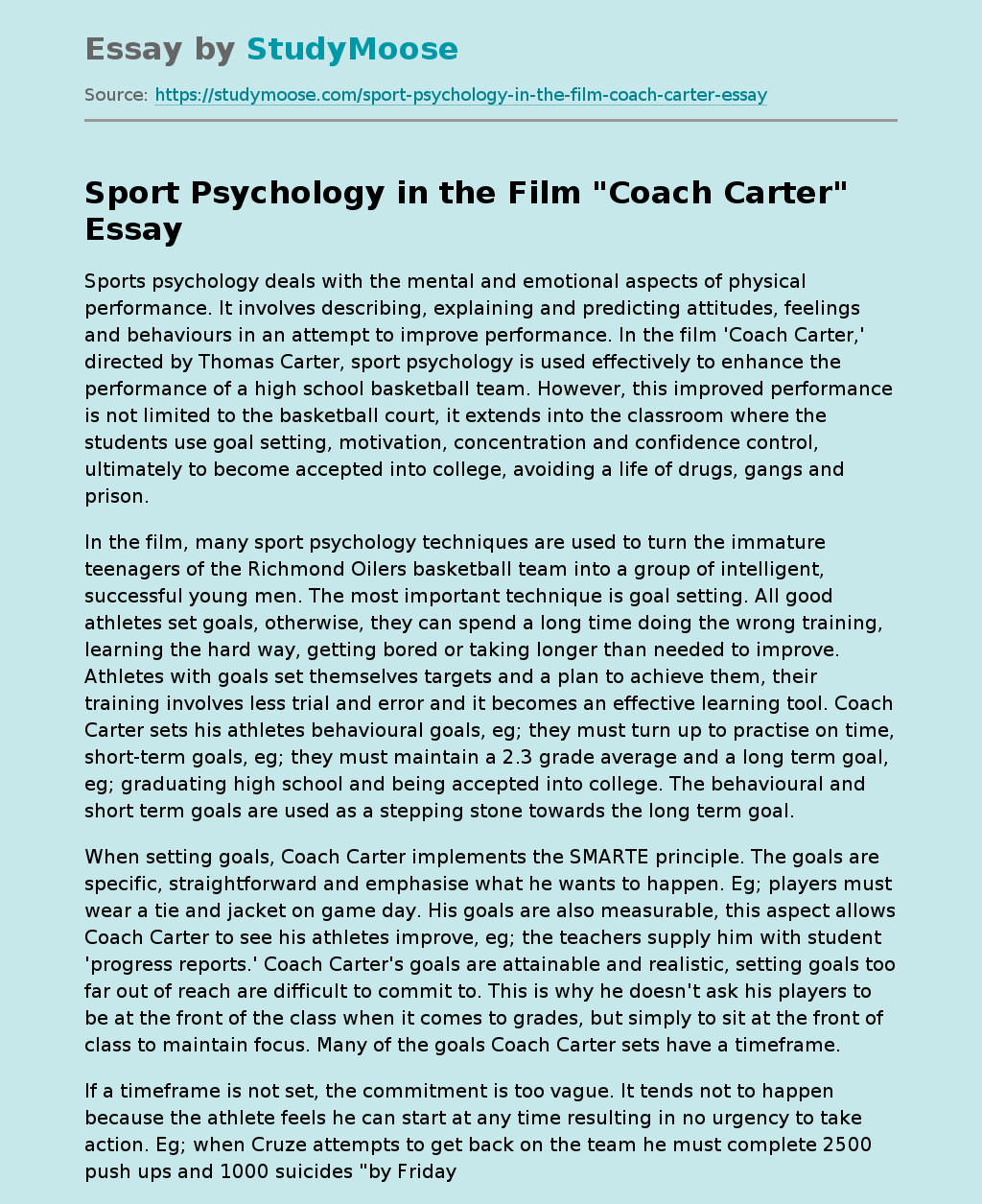