The client is a male in his early 20’s. He presents with a number of symptoms associated with antisocial personality disorder. The client has a history of breaking the law. He has been arrested a number of times for charges ranging from assault to grand theft auto. The client’s most recent arrest was the result of a street fight which led to the client punching the arresting officer.

After getting out of jail on bail the client started picking a fight with another individual, however, this encounter did not lead to physical violence.

Turn in your highest-quality paper
Get a qualified writer to help you with
“ Psychology Diagnostic Film Goodwill Hunting ”
Get high-quality paper
NEW! AI matching with writer

In addition to this history, the client partakes in a number of high risk behaviors including drinking and smoking. He has a history of being in and out of foster homes and juvenile detention as a child. There is a history of physical abuse. He currently lives alone. The client is very intelligent, quiet, and guarded. He has a noticeable problem with any authority figure. The client also has a tendency to make up stories.

According to the DSM criteria, it is clear that this client has a personality disorder. General criteria for personality disorders are detailed in the following paragraphs (Morrison, 1995). The individual must present with symptoms that deviate from their culture. Specifically, they must exhibit at least two of the following: deviation in affect, cognition, impulse control, or interpersonal functioning. This client displays deviation in cognition and impulse control. He is extremely intelligent; however, he did not continue on to college and currently works as a janitor.

Based on his fighting behavior, it appears the client feels others are against him.

During therapy sessions, the client made up stories and jokes due to his negative thoughts toward therapy. It is also clear that he feels others were against him or trying to hurt him. This is seen in his inability to form close relationships. He also displays impulse control, again evidenced by his continual fighting. For these symptoms to be categorized as a personality disorder they must affect the individuals personal and social life and last a long time, beginning in childhood.

This client’s fighting caused him to spend time in jail. Additionally, his lies, guardedness, and poor cognitions resulted in the break up of him and his girlfriend. These symptoms have been present since childhood, as the client has spent time in juvenile detention. Finally, these symptoms can not be attributed to any other mental health disorder or medical condition. Neither of these types of conditions is present.

Specific to Antisocial Personality Disorder, symptoms must have began before 15 years old. These include repeated violations of rules, age appropriate norms, or other’s rights. Specific symptoms in adulthood include aggression against people or animals, property destruction, lying or theft, and serious rule violations. To meet criteria the individual must display at least three of these symptoms. The client clearly had aggression issues toward other, as evidenced by his repeatedly starting fights. He also had a number of prior arrests for assault. It was also noted that he had been arrested for grand theft auto. This client also has a tendency to lie. He was not selective to who he lied to either. One example of this was with his girlfriend.

He told her he was from a big family and has 12 brothers. The client also lied in the beginning of his therapy sessions. As noted this client does not appear to have any Axis I diagnosis, however additional information is needed. His Axis II diagnosis is Antisocial Personality Disorder. There was no report of any medical condition.  This client is experiencing a number of Axis IV psychosocial stressors.

The client is intelligent however he has a low paying job. His educational stressors begin with the professor begins putting too much pressure on him regarding the mathematical proofs. Finally, he lives alone and there is a history of physical abuse. The abuse may be a root cause of his behaviors as an adult. The client’s GAF is 80. His behaviors are causing problems in his life however, the client is able to care from himself and hold down employment.

There is also the issue of physical contact. The therapist knew the client had experienced physical abuse as a child. However, he forced the client to hug him near the end of the film. While this ended up to be the therapeutic push the client needed to open up it could have caused more emotional harm.  This therapist also used derogatory language with the client which is a violation to ethics.

The main character was not the only character in this story who displayed overt behaviors. The therapist and the professor both expressed their own personal vises throughout the film. The professor was a perfectionist and tried to instill this onto the client. He became visibly frustrated when the client was not interested in continuing with his mathematical work or attending the job interviews.

There was also tension between him and the therapist due in part to this perfectionist attitude. However, throughout the film, the professor learned that not everyone had the same ambitions as he and sometimes being perfect did not matter. The therapist also expressed some overt behaviors. The main one was when he lost control during the first meeting with his client. Throughout the therapy sessions the therapist also disclosed information about him self.

Some of the symptoms this client displayed could be diagnosed as Major Depressive disorder. To met criteria for this disorder the individual must experience five of the following symptoms with in the same two weeks: depressed mood almost everyday, loss of interest in regular activities, weight gain or loss exceeding 5% of their typical weight, too little or too much sleep, fatigue, feelings of worthlessness, poor concentration, or suicidal ideation. Additionally, these symptoms are such that others notice changes in the individual’s behavior. This client exhibited a number of these symptoms. When hanging out with his friends, he was typically quite and withdrawn. He also seemed to lose interest in typical activities; specifically, spending time at the bar with his friends. On one such occasion, he stated that he didn’t want to hang out and just wanted to go home.

The client also displayed a loss of sleep. In one scene the client was still awake after hanging out all night. His self worth was also low. He did not feel that he was worthy for happiness. This attitude was seen throughout the film, specifically, when he was talking to the therapist and during a fight with his girl friend. There also was a conversation with his best friend regarding his potential. He stated that he was not going anywhere and their kids would grow up together. Finally, he exhibited a slight problem with his concentration. During therapy sessions the client tended to jump from one topic to another. Taking these symptoms into consideration, this client’s official diagnosis would be as follows:

This diagnosis was not chosen, however, due to the onset of the client’s symptoms. He began exhibiting symptoms in his childhood. Typically disorders such as conduct disorder which involves behaviors such as fighting and rule violations as a child lead to personality disorders as an adult. While this client may have presented with some depressive symptoms, this is not the strongest diagnosis for this client.

Two different types of treatment are presented in this film. First, with one of the first therapist was hypnotism. This treatment is typically used to take an individual back to a previous time, usually childhood. The goal is for the client to relive a traumatic event in a safe environment in order to come to terms with what happened. This client however, was guarded and against treatment and made jokes during the treatment.

Psychoanalysis was used with the other two therapists. Again with the first therapist, the client was guarded and did not cooperate with the treatment, making a joke and putting the therapist down. The last therapist however, made progress with the client. With this type of treatment, the goal is to get the client talking about the events of their life in order to solve problems on their own. It is also often helpful for clients to have a sounding board. This treatment was successful because the therapist met the client on his level.

He did not try to pry into the client’s history prematurely.  One important aspect to psychoanalytic therapy is building a relationship between the client and the therapist (Andreason & Black, 2006). This therapy technique also involves verbal communication (Andreason & Black, 2006). This is helpful with high functioning clients who are capable of introspection. When the therapist is nonjudgmental the client feels comfortable to disclose information. Knowing that the client is very high functioning, this is the best therapy for him.

One of the client’s issues was his recurring run-ins with the law. The first goal for this client would be to decrease number of arrests. Objectives would include the following: (a) attend anger management group therapy, (b) avoid situations that may provide the opportunity to get in trouble, and (c) continue with individual therapy to get to the root of the client’s anger issues. Another problem the client has is his negative attitude toward authority. The goal for this issue would be to increase respect for authority.

This would be achieved by (a) continued individual therapy and (b) finding a male role model. Finally, the client has low self esteem which may be leading to his lack of ambition. The goal here would be for the client to participate in activities to increase his self esteem. This can be achieved with the following objectives: (a) positive self affirmations on a daily basis and (b) introspection exercises. This client experienced a lot of trauma as a child which has negatively affected his adulthood. Therefore, both the therapist and the client must be patient to see changes. 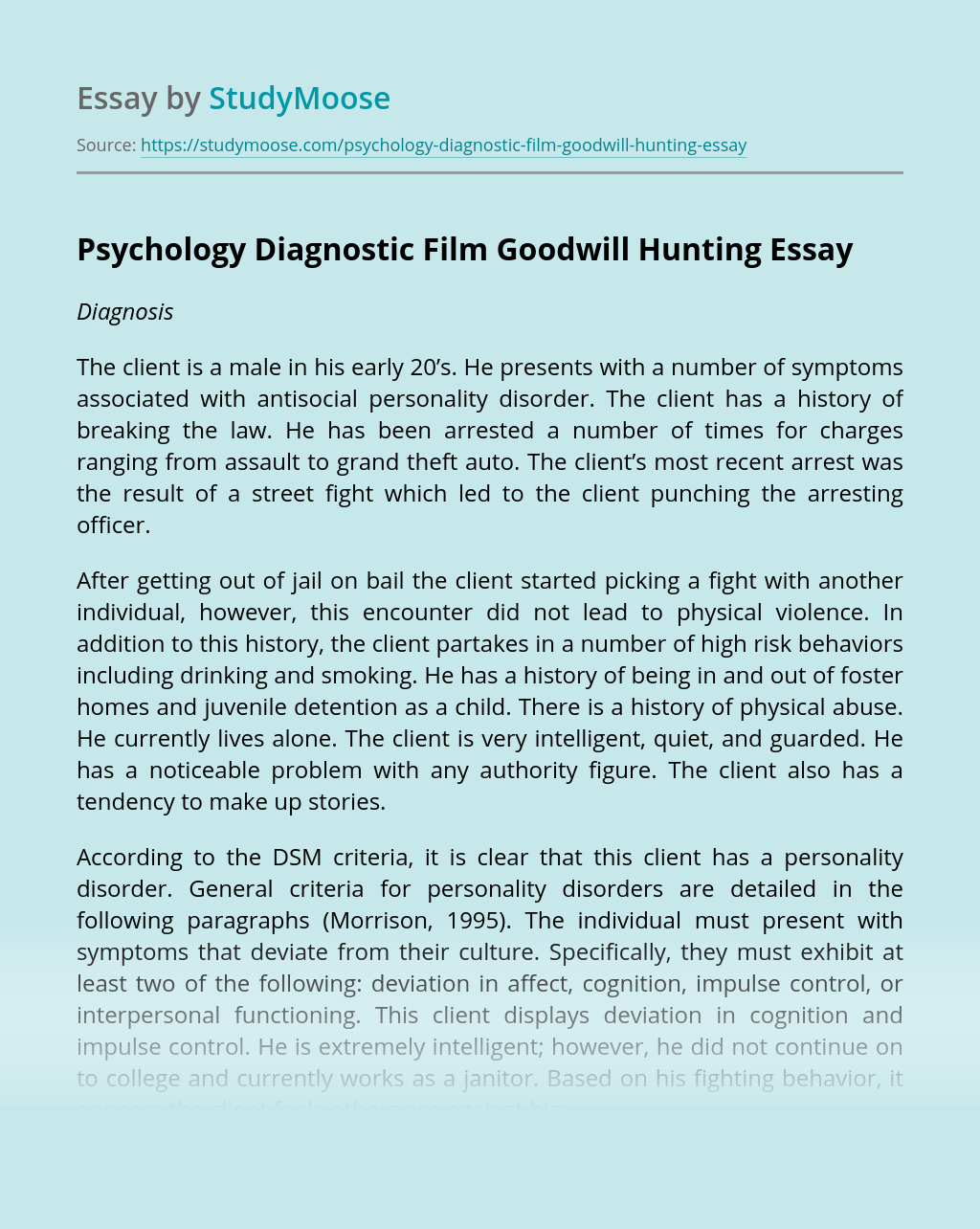 Turn in your highest-quality paper
Get a qualified writer to help you with
“ Psychology Diagnostic Film Goodwill Hunting ”
Get high-quality paper
Helping students since 2015
Stay Safe, Stay Original