The plaintiff in this case is Yale Diagnostic Laboratory, a medical service provider, while the defendants are the estate of Harun Fountain and Vernetta Turner-Tucker, the fiduciary of the estate. Harun Fountain is a minor who was shot in the back of the head by a friend. In view of the injuries he sustained, Fountain needed immediate medical services from different medical services providers. One them is Yale Diagnostic Radiology. Subsequently, plaintiff billed Tucker, Fountain’s mother, the amount of ,694.

Since the debt remained unpaid, Yale Diagnostic filed a suit against Tucker. In 1999, a judgment was obtained against Tucker. This unpaid debt was however discharged pursuant to an order of the Bankruptcy court. In the meantime, Tucker filed a tort claim against the child who had shot Fountain. Tucker included in her claims “substantial sums of money on medical care and equipment. ” Both parties agreed to settle and funds were placed in the estate of Fountain. In view of this decision, plaintiff filed a claim against Fountain’s estate with the Probate Court.

The claim against the estate was denied for the reason that the parties liable for the medical services rendered to a minor are his parents.

It argued that although the parents of the minor child are the one who are primarily liable for the medical bills of their children, under Connecticut Law, the child is secondarily liable for the payment of the same in case his parents fail to pay. Further, the trial court ruled that the child’s estate had already received substantial sum of money as a settlement for the medical services incurred to deny the plaintiff from recovering the same would constitute unjust enrichment. Issue: whether the medical services provider may be able to recover from the child if his parents refuse to make payment or are unable to make their payment.

Holding. Yes. The medical services provider may collect from the child in case the parents are unable to pay. Reasoning: It is well-settled that under common-law rule, contracts entered into by a minor child are voidable. This is subject to the exception under the doctrine of necessaries which state that a minor child may not avoid a contract for goods and services that are necessary for his health and sustenance. The doctrine of necessaries has been affirmed by decisions of the Supreme Court and by laws duly enacted by law-making bodies.

In the case of Strong v. Foote, the court ruled in favor of the dentist who sought to file a claim against an orphan’s estate. There the court held that the term necessaries should not be limited to those expenses that are necessary to sustain life but also those that are proper and suitable to the child’s condition of life. In addition, it is worth noting that from 1907 to 1959, statutes have continued to recognize the doctrine of necessaries. Further, the court also considered the child liable under the doctrine of quasi-contract.

Thus, if the parents cannot pay their debts in favor of the medical service provider justice and equity demands that they file a claim against the child who has recovered substantial amount from the person who caused him the injury Concurring/Dissenting Opinions: No concurring or dissenting opinion Disposition: Judgment Affirmed Civil Law and Common Law The case of Yale Diagnostic Radiology v. Estate of Harun Fountain et al is an example of the evolution of a well structured legal system that we have now.

This legal system is a product of so many decades of experience, research and study of our legislators which have enacted our laws for the purpose of regulating the relations of the members of the society. This case reflects not only the Civil Law system which we have but it also manifests that we adhere to the Common Law system. The Civil Law is in essence that branch of law that deals with the personal and family relations of an individual, his property and successional rights, and the effect of the obligations and contracts. It governs not only the relations between family members but also among members of the society.

It has for its purpose the protection of the interest of the public. On the other hand, common law is defined as “that which derives its force and authority from the universal consent and immemorial practice of the people” (“Common Law”p. 1) The beauty of the Civil Law is made manifest in this case as the court upheld the concept of contracts. In this case the court implicitly declared that a contract need not be entered into expressly by both parties. The parties need not necessarily sign a written contract to be bound by it. It is also possible that two contracts may result from a single transaction.

Thus, the court ruled that when the Harun Fountain availed of the medical services, the parents became primarily liable but at the same time, the child became secondarily liable to the medical service provider. In this case, the medical service provider is protected from the possibility of the parents being discharged from their obligation. This case also manifests the evolution of the common-law system in our country. Having been adopted from the English courts, several common-law principles have been adopted in our country. These principles include the doctrine of necessaries and the doctrine of unjust enrichment.

These two principles serve to protect the people whom the minor may enter into a contract and who may be prejudiced as a result of such contract. They serve as a person’s last line of defense in case are no specific laws that will govern their transactions with a minor. (George P. Roach, 2007, p. 2) The minor is presumed to be prejudiced in every contractual obligation. The law takes into account that the child may not have reached the intellectual maturity where he can decide what is best for himself in every contractual undertaking.

Corollary to this is the principle of unjust enrichment. Under this principle, when as a result of a transaction one party is benefited at the expense of another party and the latter is prejudiced and injured as a result of such transaction, justice and equity demands that the law must interfere. In this case, the medical service provider has extended its aid and service to the child, justice and equity demands that they be compensated by the child if his parents do not have sufficient money. If the medical service provider will not be paid, then an unjust situation will be created. 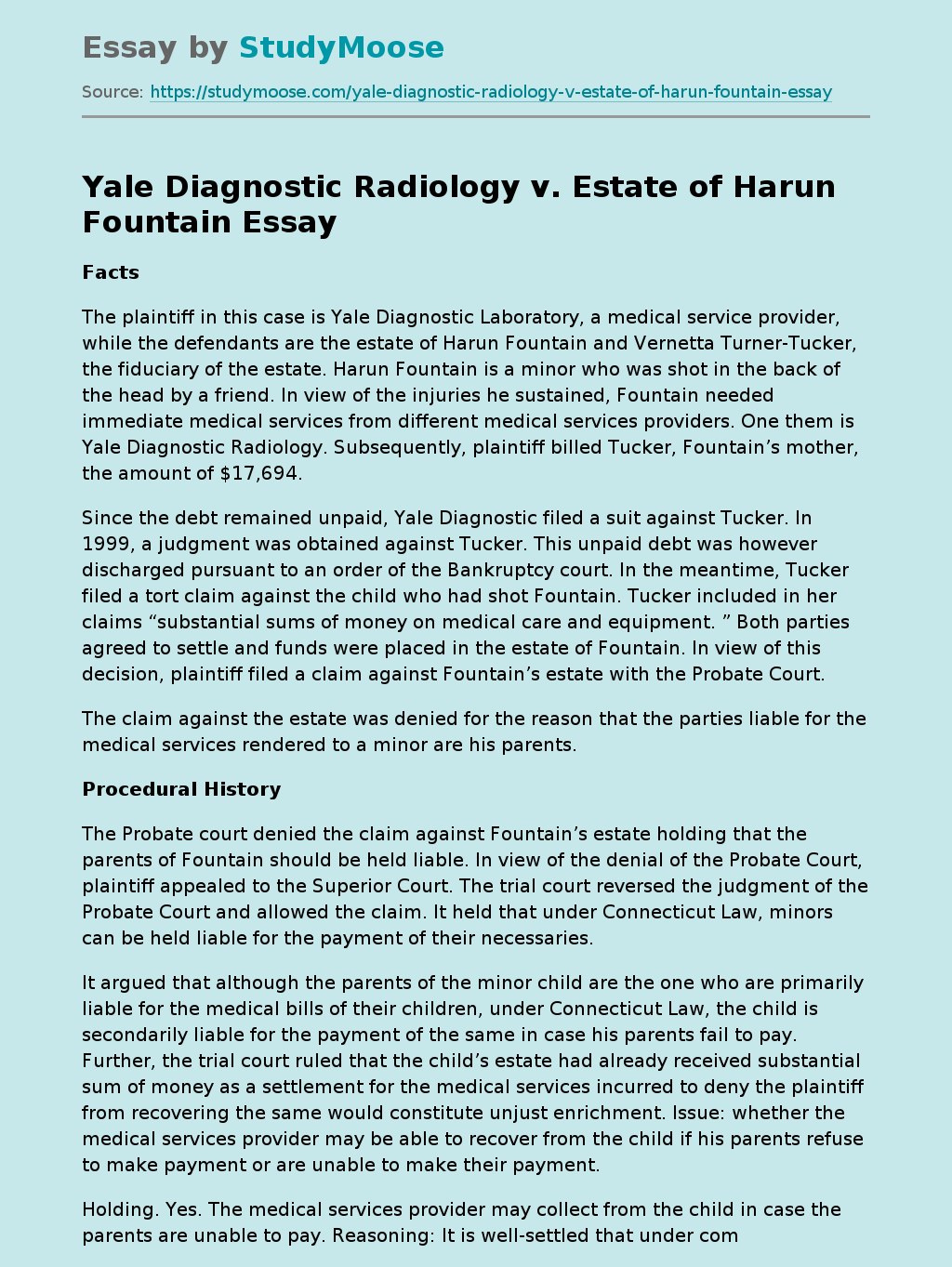