Admittance to a Radiology Tech Program

It has not been quite recently when I scheduled and fulfilled the observation requirement, but about a year ago this month when applying for this program last year. The amazing thing about it is that the memory of this day still remains vividly in my mind. It was on this day that I learned the basic and not so basic job requirements for becoming a radiology technologist. Many might think that this job is limited to aiming a machine, positioning a patient, and taking pictures of their bones, but come to find out there was a whole lot more to it.

Don't use plagiarized sources. Get your custom essay on
“ Admittance to a Radiology Tech Program ”
Get custom paper
NEW! smart matching with writer

Radiology Technologists are everywhere from physician and dental offices to clinics and hospitals, and they are doing all kinds of things. On my day of observation, I started off with one of those “do I really want this job” situations when I was placed in a room to observe a young woman receiving a barium enema. The level of comfort was somewhat questionable, but it turned out that I had no problem dealing with this situation.

I was interested in the fact that when a barium dye was added to the fluid of her enema, the insides of her intestines could be viewed to search for blocks or other problems. The next two patients observed were also receiving barium treatments. In one room I observed an elderly lady receiving a barium swallow exam in which she attempted swallowing different mediums of liquid and solid foods, which were also mixed with this barium dye.

As she swallowed some of these things you could see on the monitor that small amounts were sometimes moving into her airway instead of her stomach. This was exactly what they were looking for so that a diet could be arranged for her in which this problem would no longer occur. The next barium case was the absolute saddest thing I had seen in a while. A three-year-old girl was to receive a catheter so that barium infused fluids could be pushed into her bladder. This was to see if it was backing up into her kidneys when full and resulting in numerous infections. The procedure wouldn’t have been so gruesome to me, but to that three year old it was. She was extremely upset, as were her mother and father, who I think may have been crying a little too. It was in this case that I realized this job comes with compassion and caring. I was also able to see the importance of the technologist’s understanding of the procedure, as she was required to explain it to the distraught parents in great detail.

Immediately following this I was sent with another female technologist, as well as a portable x-ray machine, to the surgical unit. This was also something I never really thought about a technologist doing. Upon arriving in surgery, we were required to put on hair and shoe covers, and masks over our nose and mouth. We then took two sets of pre-surgical pictures for two different patients about to undergo back surgery. Upon walking down the hall and developing these pictures we discovered that one set was not so clear, and we were required to repeat the process on that patient.

After this I was sent to see an MRI. I found out that the MRI has to do with magnetism, and can produce higher quality imaging than the typical x-ray. It is a large machine in which the patient must lie on a table that is passed through the imaging center and they must remain completely still. The particular man I saw was having an MRI of his abdominal region and the technologist was required to start again after learning the man had forgotten to remove his metal belt buckle. It was amazing to see all the things that this type of high quality image could show you.

When the day was over I was a little disappointed in that I didn’t get a chance to see a CAT Scan or an Ultra Sound performed, but I was still pleased overall with everything I had seen and learned. After seeing all the things that can be accomplished among the radiology field, it is hard to believe that the x-ray was actually discovered by accident! While experimenting with cathode rays, Wilhelm Conrad Rontgen, noticed an image he had cast that was far beyond their range. He continued investigating to find that these rays were not deflected by magnetic fields, and that they were able to penetrate many types of matter. He then produced the first x-ray picture, which was of his wife’s hand and he went public with it. The people were shocked and scientists showed great interest. He named this new type of radiation X-radiation, in which he allowed the X to stand for unknown. This is why these amazing pictures are to this day known as X-rays.

Admittance to a Radiology Tech Program. (2016, Jun 21). Retrieved from https://studymoose.com/admittance-to-a-radiology-tech-program-essay 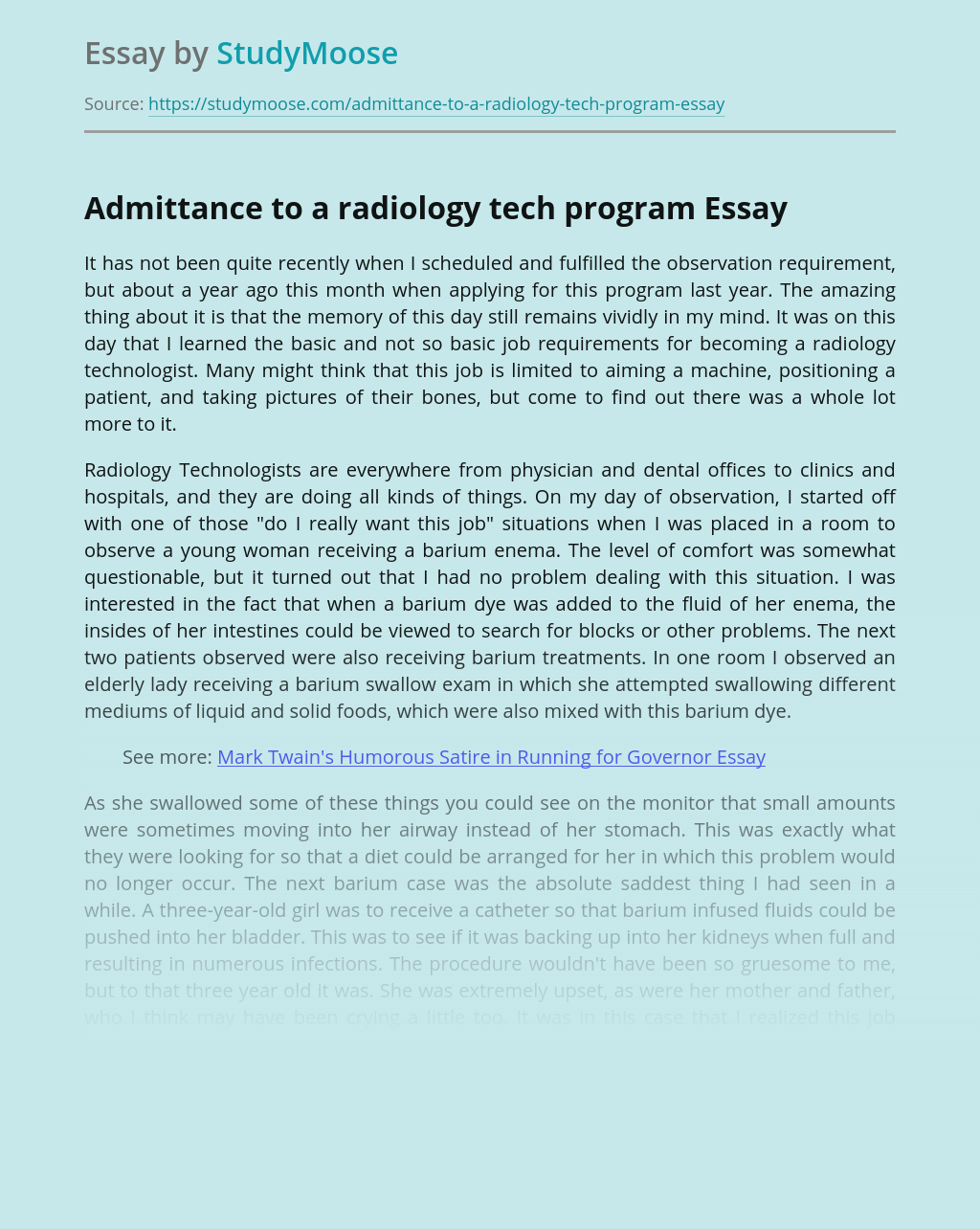