Hunters in the Snow Character Analysis of Tub

Being a man isn’t always easy, for most of their life they are taught to show no affection and to be tough in almost every situation. The tragedy of machismo is that a man is never quite man enough. “Hunters in the Snow”, by Tobias Wolff, three hunting buddies, Frank, Tub and Kenny, set out on a hunting trip together as they have done for years. Tub, who is over-weight, self-conscious and a good friend, shows some of his weaknesses, strengths and hardships that are sometimes placed on men in different situations.

Don't use plagiarized sources. Get your custom essay on
“ Hunters in the Snow Character Analysis of Tub ”
Get custom paper
NEW! smart matching with writer

The protagonist, over-weight, Tub and his two hunting buddies, Frank and Kenny take off early one morning to the snowy mountains for a deer hunt. When they arrive and begin heading to the woods they near a creek so they sit down for a little morning snack. Kenny and Frank almost immediately start to pick on Tub as soon as he pulls out a hard-boiled egg and a stick of celery to eat.

Kenny states to Tub, “‘You still on that diet?’ He winks at Frank. ‘What do you think? You think I like hard-boiled eggs?’” stated Tub (Wolff 30).

Tub is in denial about his impulsive eating problem, telling them that it is his glands and tries to hide it from them until Frank confines in him about his 15 year old babysitter love affair he is having on his wife. A person being picked on can only take so much until they usually snap or make an impulsive move, the same way that Tub impulsively eats food.

After being picked on Tub felt threatened and made an impulsive move by accident. Kenny starts shooting the fence post, a tree, kills a dog and then turns the rifle at Tub saying, “’ I hate you.’”(33). Tub in fear shoots from the side, shooting Kenny first. Tub and Frank get Kenny in the truck to take to the hospital 50 miles away.

Once Tub and Frank begin to drive Kenny to the hospital Frank begins to confine in Tub about his love affair and even though Frank is in the wrong, Tub understands where Frank is coming and doesn’t judge him and instead tells Frank, “’Frank, when you’ve got a friend it means you’ve always got someone on your side, no matter what. That’s the way I feel about it’” (39). Despite how manly Tub is supposed to be as a man, the two men have this special bond together and they show it. Tub then tells Frank, ‘”When I said that about my glands, that wasn’t true. The truth is I just shovel it in’” (40). Regardless being made fun of or picked on about Tub’s weight and clumsiness, Tub is yet a good listener and a great friend.

Ironically, at the end of the story the two guys, Tub and Frank, are bonding and supporting each other at the diner they stop at to get warmed up before the hospital, even though their other friend Kenny is in the back of the truck dying. Frank tells Kenny, “’It wouldn’t hurt so much if you just stayed put. Now we’re going to the hospital. Got that? Say it—I’m going to the hospital’” (39). Once they leave the diner and are headed back towards the hospital, Tub turns back to Frank, “’I just pulled a real boner,” he said. What’s that? I left the directions on the table back there’” (39).

A man having to be tough and to show no affection can sometimes take a toll on their physical self being, yet they can also still be somewhat sensitive to others emotions and feelings. In this short story by Tobias Wolff, “Hunters in the Snow”, Tub shows some situations of strength, weaknesses and hardships men endure as a friend or buddy.

Hunters in the Snow Character Analysis of Tub. (2017, Feb 04). Retrieved from http://studymoose.com/hunters-in-the-snow-character-analysis-of-tub-essay 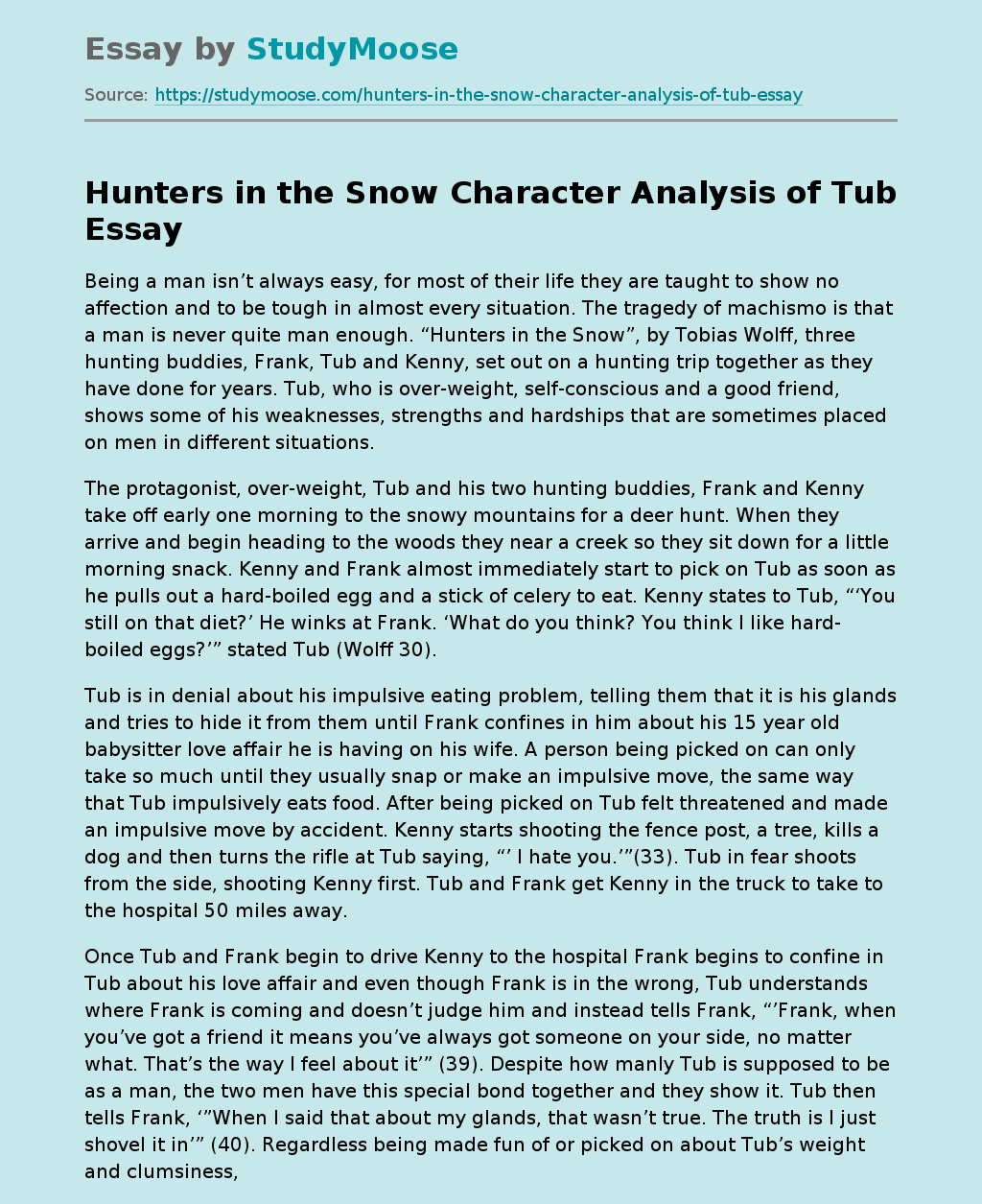