In The Things They Carried, O’Brien talks about multiple different things that the men at war carry. They take things with them that soldiers always have like guns, bags, grenades, ammo, food, water, and things like that, but they also carry personal items like Kiowa’s Bible and moccasins, or Jensen’s vitamins. The men however, have more than just physical items. They have things that always stay with them like emotional and figurative things. Throughout the novel, O’Brien goes back to the theme of things carried, whether that be in necessities, superstitious items, or emotional burdens.

Don't use plagiarized sources.
Get Your Custom Essay on Physical and Emotional Burdens Just from $13,9/Page

O’Brien uses the first chapter to explain, in detail, the physical things that the men carried. He tells of how the men take their, “compass, maps, code books,” (O’Brien 5) along with “the M-60, M-16, M-79 – they carried whatever presented itself, or whatever seemed appropriate as a means of killing, or staying alive.” (7). These young men at war put anything that can possibly help them in their bags.

Even if it is not necessary for the specific mission they are on, they take these items with them because of their collective fear of the unknown. Their cumbersome, bulky, heavy backpacks and gear weigh on the men physically, and also as shown throughout the book, take a toll on their morale. O’Brien uses this style of writing and the theme as a tool to impress upon his audience just how heavy the burdens of the men really are. The longer they have to carry all these things the worse it got.

The physical items that they lug with them are not limited to items issued by their generals. Many of them also carry superstitious things that they think might help throughout the war. Jimmy Cross has his, “good-luck charm from Martha. It was a simple pebble” (6), and “Dobbins carried his girlfriend’s pantyhose wrapped around his neck” (9), and Kiowa “always took along his New Testament and a pair of moccasins” (9). Whether it is to comfort them, or for religious purposes, or just plain superstition, most of them have some sort of personal item that they take along with them.

Even though they already have hundreds of pounds of equipment to carry, they still choose to carry these things. This is very justifiable however, because most of these items are something from home, something to remind them of what they have back home, and gives them hope that they will someday return there. Hope is a present theme in The Things They Carried, and is always necessary with men at war, because without hope they would have nothing to fight for and their morale would be gone.

The most burdensome of things carried by the men, is the emotional baggage. Throughout the novel, Lieutenant Jimmy Cross carries the emotion of love. This weighs on him an enormously throughout the war because he can never get his mind off of Martha, even though she does not love him back. This causes emotional detachment from the war and from commanding his troops. When Ted Lavender dies, Cross blames himself for not being as focused as he should be because of Martha, and burns her pictures and letters.

Even though he no longer physically carries these things, he still emotionally carries them throughout the book because he can never get them out of his mind. Kiowa is another example of one of the soldiers who carries an emotional burden with the tremendous weight of “his grandmother’s distrust for the white man” (3). This could propose a difficulty to trust his fellow soldiers. All the men carry with them the memories of their fallen friends and fellow soldiers. They find different ways to grieve over the fallen soldiers, but never do forget them. Like O’Brien says, “The thing about remembering, is that you don’t forget.” (33).

These young men fighting for their country in Vietnam are extremely brave. War is a really hard thing for non-soldiers to comprehend when you start to talk about the stories of what happened when they are just marching around the jungle. But the theme of emotional and physical things carried is heavily shown throughout the book and presents reasoning for why these men did and felt the things they did. 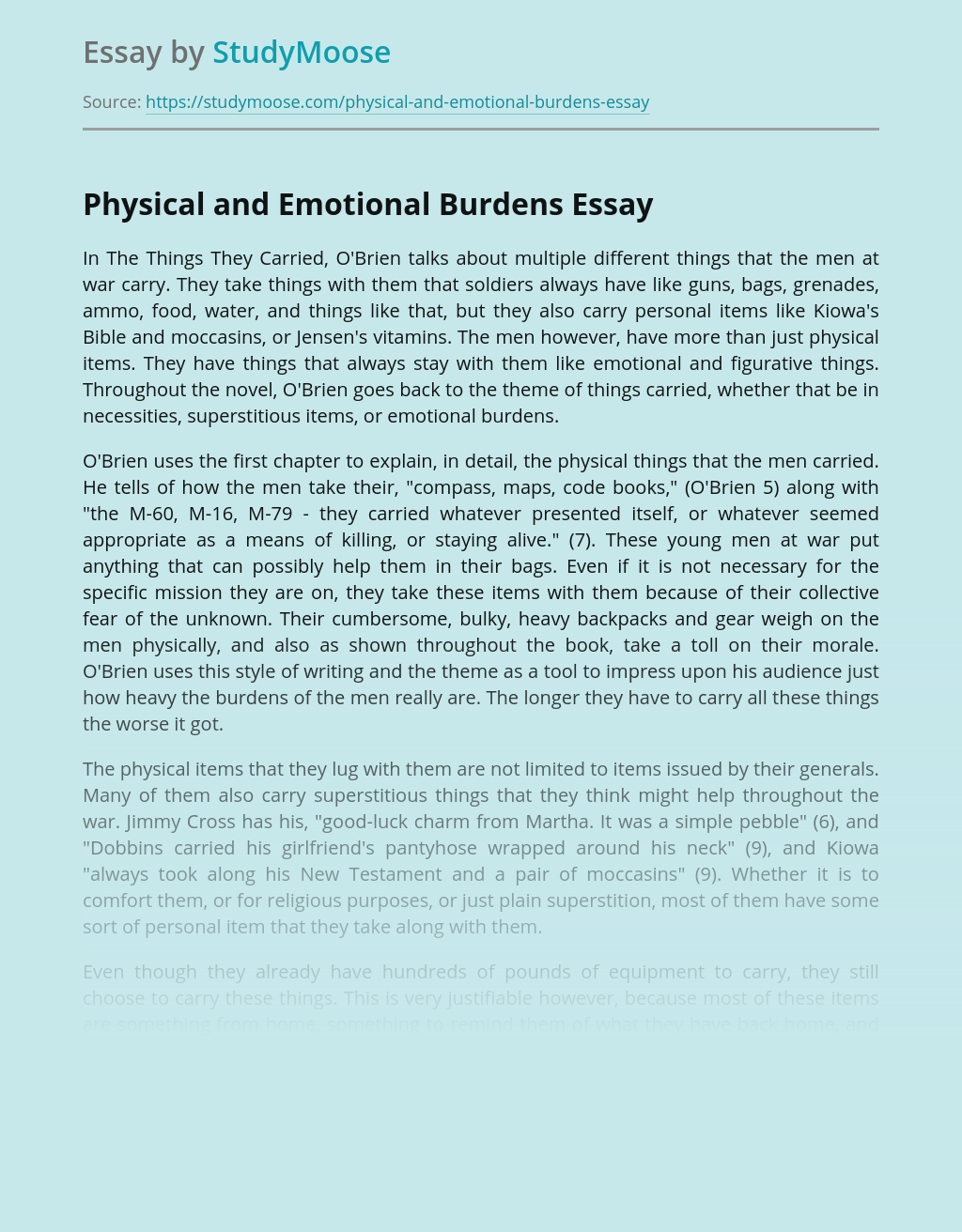 This essay intends to examine the poem “The Send Off” by Wilfred Owen. Owen wrote this poem while he was stationed at Ripon army camp. He was based there after being a patient at the Craiglockhart War Hospital, this is where he met Robert Graves and Siegfried Sassoon. Owen was at Ripon between March and... VIEW ESSAY

The Protector is about a firefighter named Jack O’Malley, and his ‘family’ of seven people orphaned as teens who basically adopted each other and who all changed there sir name to O’Malley. Jack O’Malley is a firefighter who has seen so many wrecks and fires he has lost count, but the arsonist who is treading... VIEW ESSAY

“Nowhere Man” by Pico Iyer talks about how being a transit lounger has it’s ups and downs. Packing and waiting for your next plane as soon as you’re about ready to just sit down and rest. From sleeping in airports to eating almost all of your meals off of plastic plates. I could relate to... VIEW ESSAY

“The first element could be called genuineness, realness, or congruence. The more the therapist is himself or herself in the relationship, putting up no professional front or personal facade, the greater is the likelihood that the client will change and grow in a constructive manner. This means that the therapist is openly being the feelings... VIEW ESSAY