The word “true” by definition means to accurately conform to a standard or expectation. Ironically in Tim O’Brien’s The Things They Carried, the narrator uses fiction to “tell a true war story” (67). As a soldier himself, O’Brien uses his personal experiences as well as embellished or altered facts to help convey the emotional truth, as it is nearly impossible to be certain the absolute truth of an experience, especially in war. He successfully reveals that “Absolute occurrence is irrelevant.

Don't use plagiarized sources. Get your custom essay on
“ True War Story in Tim O’Brien’s “The Things They Carried” ”
Get custom paper
NEW! smart matching with writer

A thing may happen and be a total lie; another thing may not happen and be truer than the truth” (83). In O’Brien’s explanation of how a happening truth may “be a total lie” and a integrated imagination can be “truer than the truth,” he highlights how important storytelling is—broadening imagination and making memories. O’Brien compensates for the difficulty of telling a true war story by staying faithful to telling the complexity of the truth and focusing on the difficulties of war.

By having differing experiences of the war, the average civilian and soldier experience “the truth” quite differently, however O’Brien helps to bridge a gap between both parties.

By blurring the lines between happening truth and story truth, O’Brien stays faithful to the complexity of the story and experience he wishes to convey. He instills a sense of uncertainty in the reader with every story in the book, retelling an event to compel the reader to trust and believe in O’Brien’s invention.

By using the human capacity for imagination, he helps deal with imagination through ambiguous and surreal stories to communicate the accurate experience of the Vietnam War from the soldiers’ perspective. However, after emphasizing the realness of his stories, O’Brien then reminds the reader that they are all made up. For example, in “How to Tell a True War Story,” before telling a gut-wrenching story about how a soldier slowly kills a baby water buffalo, O’Brien writes, “This one does it for me. I’ve told it before—many times, many versions— but here’s what really happened” (78). Although, the story is told many times, once O’Brien uses the words “here’s what really happened” the reader falls into a trap believing that the words O’Brien uses are the actual truth. In purposefully intertwining “the surreal seemingness” (71) that deems the story untrue and the gruesome/ mysterious reality of war, the exaggerated additions to the story represent the hard and exact truth of what it seemed in that very moment. O’Brien treats the death of of Kurt Lemon in similar fashion. Tasked with interpreting six different versions of Lemon’s death, the reader remains confused of how Lemon actually dies. Yet, O’Brien leverages this the confusion to make apparent that his narrator (O’Brien) doesn’t understand how it happened either: “In any war story, but especially a true one, it’s difficult to separate what happened from what seemed to happen. What seems to happen becomes its own happening and has to be told that way. The angles of vision are skewed…then you look back at the moment and then look away again. The pictures are jumbled; you tend to miss a lot” (71). By repeating Lemon’s story multiple times, O’Brien use of repetition strengthens the idea that in war it is common to lose yourself and your senses: skewed visions, jumbled pictures. Through the different versions showing happening truth and story truth O’Brien reveals the harsh reality of telling a true war story.

While writing this “true war story”, O’Brien is thrusted back into the memories of war, he is forced to endure the after effects of the Vietnam War, his only savior is his writings. Despite all the trauma he faces after the war, O’Brien uses his storytelling prowess to help the reader understand an accurate representation of a war experience. Even though it’s a difficult task—the emotional, mental, and physical aspects of war are hard to put into words—he invents a bridge for civilians to cross and explore the uncertainties of war. The author uses characters such as Rat Kiley, Kiowa, and Mary Anne to allow the reader to find a connection and fully understand the detrimental effects war can bring. For example, when Mary Anne first lands in Vietnam, she was an average girl who landed in the middle of the war; however, after weeks of staying there she changed:

“What happened to her, Rat said was what happened to all of them. You come over clean and you get dirty and then afterward it’s never the same. A question of degree. Some make it intact, some don’t make it at all. For Mary Anne Bell…Vietnam had the effect of a powerful drug:… The endorphins start to flow…you become intimate with danger; you’re in touch with the far side of yourself … you want to string it out and go wherever the trip takes you… She wanted more, she wanted to penetrate deeper into the mystery of herself, and after time the wanting became needing, which turned then to craving” (114).

Through Rat’s storytelling to the members of the Alpha platoon, O’Brien conveys that fear is a factor that can grow into something bigger— can make you lose yourself or lose apart of yourself. Like Rat said, it’s only “a question of degree.” Some come out of the war whole with part of themselves missing and some people “don’t make it out at all.” By using Mary Anne’s fall from reality, the wanting of penetrating “deeper into the mystery of herself,” O’Brien lets the reader understand that war isn’t just black and white. There are layers. He allows the reader to use imagination to further understand the burdens/difficulties of war, forcing the reader to get close to the actual truth— the reality of war.

Even though writing “a True War Story” is hard in many ways, O’Brien uses many techniques to get his point across: storytelling . He uses personal experiences and intertwines them with his additional touch of imagination to reveal that drawing from both happening truth and story truth, and fashioning a blend of the two, renders a more authentic representation of the experience.. By forging accurate experience through stories that borrow from both fact and fiction, O’Brien delivers readers an accounting of wartime that transcends the strict confines of reporting. In other words, he uses invention to bring the truth in to greater relief. 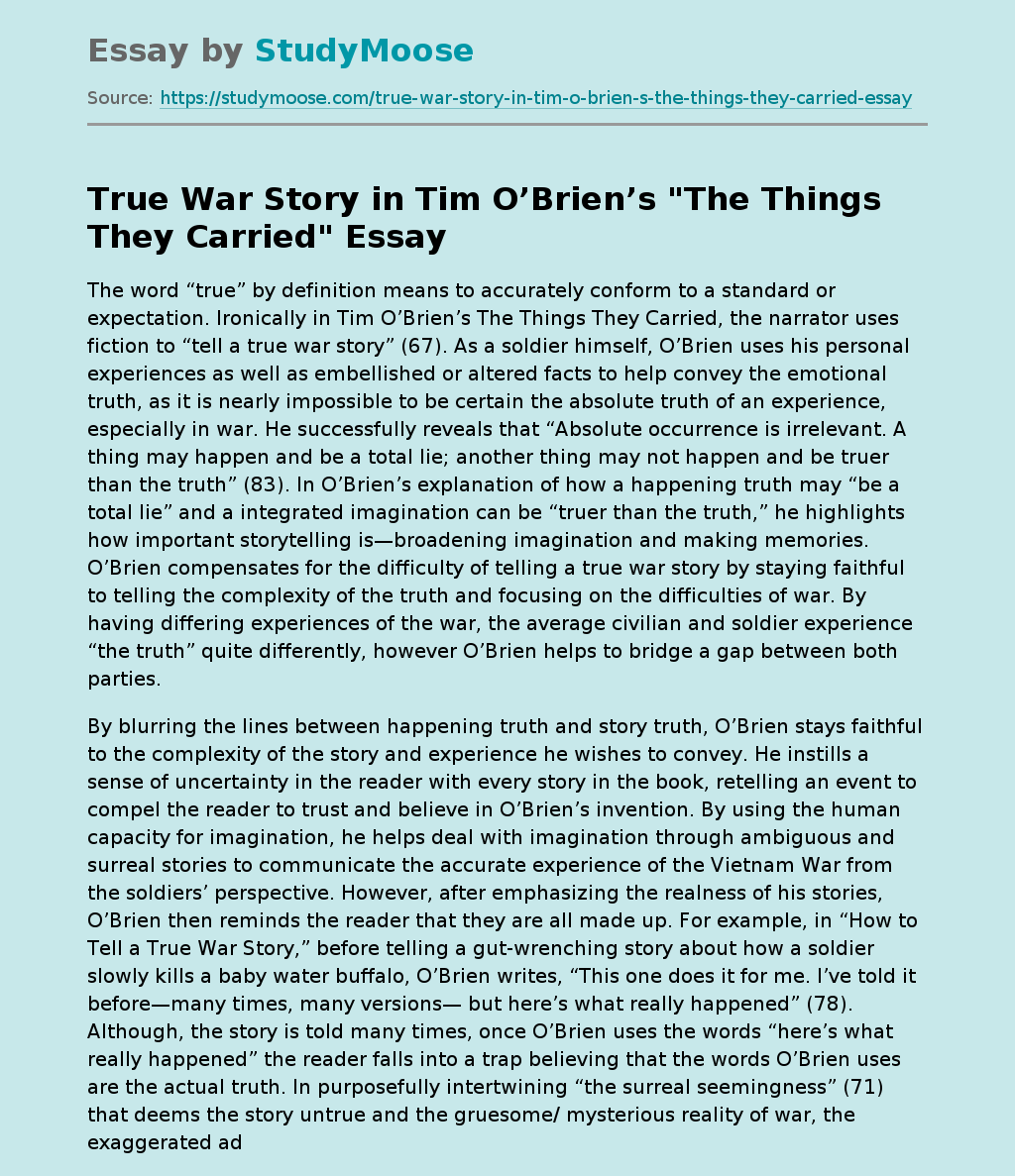