In Tim O’Brien’s “The Things They Carried” First Lieutenant Jimmy Cross is a 24 year old young man in love with a girl named Martha, who is thrust into the jungles of Vietnam. Carrying “the responsibility for the lives of his men” but distracted by his fantasies of Martha, tragedy strikes his platoon and Ted Lavender is shot and killed. (p. 97). Lieutenant Cross grieves for Lavender, for Martha, for himself, as he curtails his daydreams “determined to perform his duties firmly and without negligence.

Don't use plagiarized sources. Get your custom essay on
“ The Dilemma of Lieutenant Jimmy Cross in Tim O’Brien’s “The Things They Carried” ”
Get custom paper
NEW! smart matching with writer

The war was gruesome, relentless, monotonous, and purposeless. The men of Lieutenant Cross’s platoon carried everything they needed (and some things they did not) on their persons as they “humped” it through the jungles of Vietnam (p. 98). They carried food, clothing, bedding, weapons, photos, diseases, parasites, wounded and dead comrades, memories, reputations, dreams, and “the common secret of cowardice barely restrained” (p. 105). They carried things for many different reasons: choice, necessity, entertainment, superstition, or as a function of rank or field specialty.

PARAGRAPH Among his things, Lieutenant Cross carried memories, letters, pictures, and a good luck charm from a young college student named Martha. Although they dated before the war, they only kissed briefly, and her letters carried news of a “separate-but-together quality” they shared (p. 99). He knew that just because she signed her letters love Martha did not mean she was in love with him, but he was hopeful. He often lost himself in fantasies of her, wondering about her virginity and what “her truest feelings were” (p.

He moved slowly and distractedly finding it difficult to keep his mind on war and his men’s security. His mind continuously wandered to thoughts of “Martha’s smooth young face, thinking he loved her more than anything, more than his men, and now Ted Lavender was dead because he loved her so much and could not stop thinking about her” (p. 99). He was young and in love and could not help it but he was ashamed and hated himself too. PARAGRAPH Among his things, Ted Lavender who was scared, carried tranquilizers, premium dope and extra ammunition, necessities for him.

On the day he was shot and killed, he had just popped a tranquilizer and gone off to pee. Caught by a bullet to the head, in the act of zipping up, he went down instantly, under an exceptional burden of “unweighed fear” and extra bullets (p. 99). PARAGRAPH “The morning after Ted Lavender died, First Lieutenant Jimmy Cross crouched at the bottom of his foxhole and burned Martha’s letters. Then he burned the two photographs” (p. 105). He realized that daydreams of unrequited love had no place in this nightmare world he called reality.

He knew that this sentimental gesture could not burn the blame he felt for Lavender’s death, but perhaps it would keep the rest of the platoon alive. PARAGRAPH Lieutenant Jimmy Cross’s dilemma arose from the natural impulses of a young man in love coupled with the incessant responsibilities of a combat officer. Following Lavender’s death he realized “that his obligation was not to be loved but to lead” (p. 107). A heavy burden to carry indeed. He vowed to himself diligence to his officer’s duties, fully intending to run a tight ship regardless of the complaints of his men.

The Dilemma of Lieutenant Jimmy Cross in Tim O’Brien’s “The Things They Carried”. (2016, Jul 18). Retrieved from http://studymoose.com/the-dilemma-of-lieutenant-jimmy-cross-in-tim-obriens-the-things-they-carried-essay 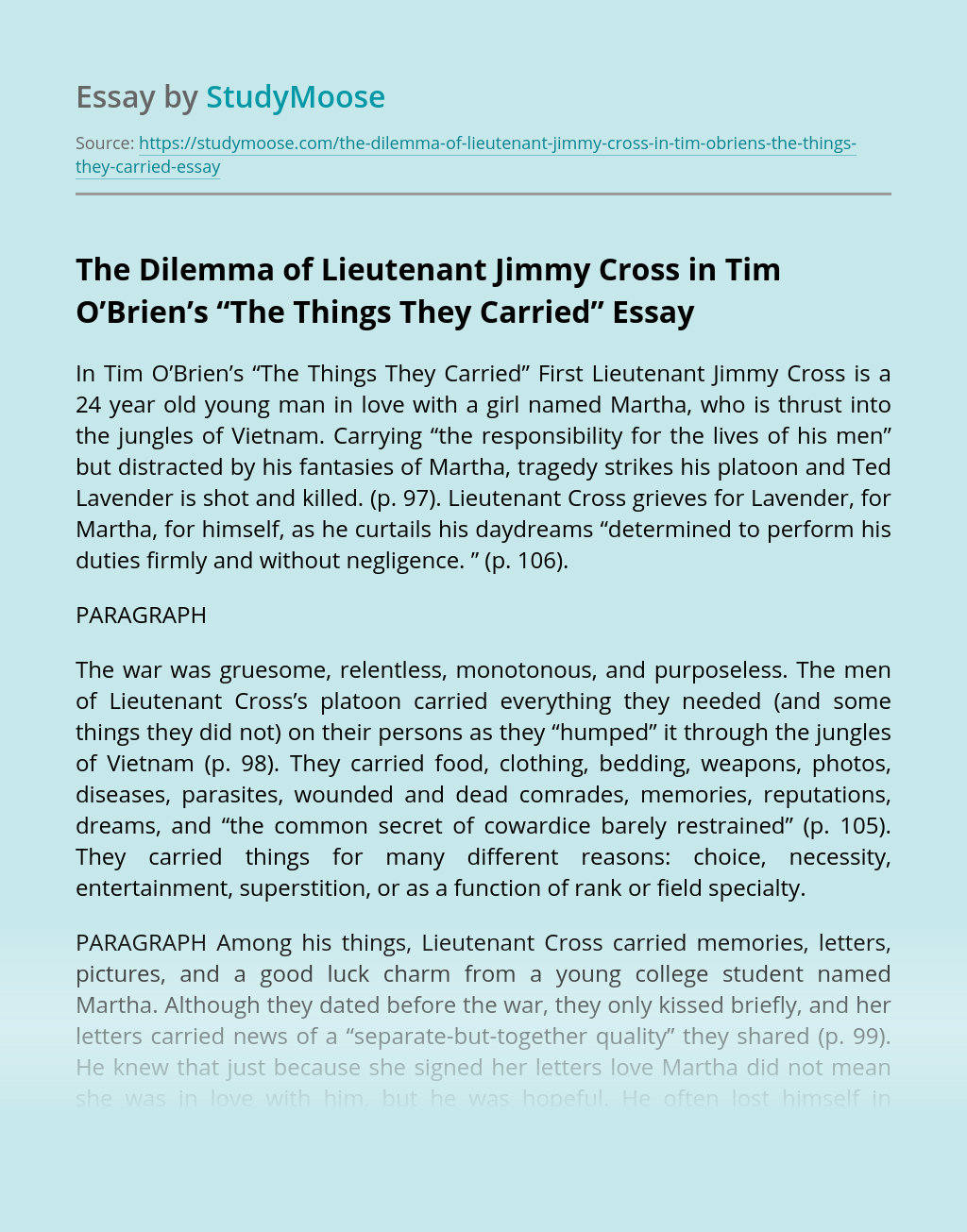