In The Things They Carried, as the title indicates author and Vietnam war veteran Tim O’Brien carefully describes all of the necessities of warfare carried by the men with whom he shared the war. In addition to the weapons and gear necessary for survival they carried within themselves the images and memories of home. O’Brien describes the various articles carried by individuals as well as the heavier items they would take turns carrying. The heaviest were “the things men carried inside” (25).

Turn in your highest-quality paper
Get a qualified writer to help you with
“ Love and War in Tim O’Brien’s The Things They Carried ”
Get high-quality paper
NEW! AI matching with writer

Because of the heaviness it was often too much for one man and “they shared the weight of memory. They took up what others could no longer bear” (14). O’Brien indicates the heaviest memories were of love ones, particularly wives and girlfriends. Obrien describes the characteristics of the memories of love in a combat zone, memories that could be a saving grace or a dangerous self-destructive weapon.

Women occupy a very special place for the men of O’Brien’s platoon as they do for combat soldiers everywhere.

The women they know and love, mothers, sisters, wives and girlfriends, are tens of thousands of miles away. At times they are as mentally and emotionally distant as they are in geographic terms. When firefights rage the soldiers’ thoughts by necessity become fixed and focused on the chaos of combat surrounding them and the thought of women can be fleeting or distracting. It may be a thought of the loved one they hope to see if they survive, or the thought may distract them and cost them their life or the life of another soldier.

Women are as real as their vivid dreams yet upon awakening there is the doubt they ever existed. The space they occupy is the anxious and unnerving world mixed with hope and doubt, happiness and depression. With their letters they provide a link to the real world once occupied by the soldiers who may wonder if the women will be there for them if and when they return. The soldier may hope their girlfriend will be there and doubt she will understand. The thought of the girlfriend may provide a solid foundation on which to live on another day, or with a “dear John” letter inadvertently provide a seemingly hopeless depression. The women occupy a space unlike any other space in the thoughts of the combat soldier.

For Lieutenant Jimmy Cross the thought of “Martha, a junior at Mount Sebastian College in New Jersey” was a constant preoccupation (1). She was a daily part of his life, and he had a ritualistic devotion to viewing photographs of her. She was in many ways the embodiment of the contradictions women occupied in soldiers’ thoughts. She was not quite a serious girlfriend and lover who was devoted to him and would be waiting for him. In fact their relationship before the war was one-sided:

And then suddenly, without willing it, he was thinking of Martha…why so alone? Not lonely, just alone…and it was her aloneness that filled him with love. He remembered telling her that one evening. How she nodded and looked away. And how, later, when he kissed her, she received the kiss without returning it…” (11-12).

Yet Cross would not let go of his attachment to her. He blamed it for the death of one of his soldiers; “now Ted Lavender was dead because he loved her so much and could not stop thinking about her” (7). He felt that because of his preoccupation with her he failed to supervise his men and as a result Lavender was shot. As a result Cross decides to burn her photos and letters. Now “he hated her. Yes, he did. He hated her. Love, too, but it was a hard, hating kind of love” (24). His feelings for her were just one of the many contradictions of the war.

In some ways women became almost magical, and occupied the superstitious and surreal world of the thoughts and actions of men in combat. “Henry Dobbins carried his girlfriend’s pantyhose wrapped around his neck as a comforter. They all carried ghosts” (10). The stockings gave Dobbins the memories that comforted him. Later he became convinced it truly was a good-luck charm as a boobytrap failed to detonate after he tripped it and then survived a vicious firefight (117-118). For Dobbins and others the pantyhose “gave access to a spiritual world” and even after he receives a “dear John” letter he retains the pantyhose stating “the magic doesn’t go away” (118).

Other women, real or imagined came into the men’s lives through their stories. The most dramatic stories “are those that swirl back and for the across the border between trivia and bedlam, the mad and the mundane” (89). O’Brien recounts the story of the “Sweetheart of the Song Tra Bong”, the girlfriend of a soldier who manages to have her visit him at his medical-aid base (89-91).

“Mary Ann” is but seventeen years old, but quickly adapts to the blood and gore of her boyfriend’s job and becomes a valuable assistant treating the wounded. But then she becomes more and more fixated to the war, the culture and the environment of Vietnam. She becomes friendly with, and then a part of a contingent of the strange and isolated “greenies”, Special Forces soldiers stationed at the base. She eventually becomes a part of them.

Soon she cannot be found despite her boyfriend’s search. According to the story she began going out with the Green Berets on combat missions. When she returned she was no longer what she had been.

He had a hard time recognizing her. She wore a bush hat and filthy green fatigues; she carried the standard M-16 automatic assault rifle; her face was black with charcoal. Mary Ann handed (her boyfriend) the weapon. “I’m exhausted,” she said. “We’ll talk later.” (102)

Despite her boyfriend’s effort to get her away from the Green Berets and send her home she is hooked; “Vietnam had the effect of a powerful drug” (114). Soon, the story goes, Mary Ann disappears into the jungle, never to be heard from again, only occasionally spotted as a ghostly figure in the jungle. It is as though she served as a metaphor for the space occupied by women in the war. They were far away in a land so remote it no longer seemed to exist. Then against all odds the soldier is able to literally import the woman he loves. Then the war changes everything and destroys the relationship.

For O’Brien women also occupy a dual yet contradictory space in his life. His first young love is also his first collision with death. Although he and his girlfriend are only nine, O’Brien “know(s) for a fact that what we felt for each other was as deep and rich as love can ever get” (228). Tragically she is suffering from a fatal disease and dies. For O’Brien the memory of her, like his memory of fallen comrades, is and always will be sharp and vivid.

For O’Brien the lost friends and lost girlfriend are united in death and brought back to life in the memories and stories of those who survive. It is the vivid image of a casualty of the war that inexplicably reminds him of his young girlfriend Linda; “all day long I’d been picturing Linda’s face, the way she smiled” (228). For O’Brien the dead will always be in a sense alive. The fallen troops and Linda are “all dead. But in a story, which is kind of dreaming, the dead sometimes smile and sit up and return to the world” (225).

If O’Brien’s lost girlfriend is a link to the departed his daughter Kathleen is the vision of life. He brings her to Vietnam when she is only ten, and seems to serve as the woman who will help him break his link to the deaths of Vietnam. She is too young to understand why her father has journeyed off the normal tourist sites to find the spot where a friend was killed and the body lost in the mire of a swampy river.

She witnesses him as he performs a ritual burial of his late friend’s moccasins in the spot they found his body. It is though she is his tether back to reality, the present and life itself. Childlike she chastises him for his actions and cannot understand the importance of the places she visits. She tells him he is “weird” for coming back to Vietnam, innocently proclaiming “Like coming over here. Some dumb thing happens a long time ago and you can’t ever forget it” (183).

She presents the counterpoint of his life in Vietnam and it had to be an odd sensation for O’Brien to see his daughter in an area of Vietnam that is drastically different than the Vietnam of O’Brien’s death. It brings up the idea and question of whether O’Brien, in his wildest thoughts during his combat in that location that his daughter would stand in the same spot years later. Unlike the other women of memories and dreams Kathleen is able to be in Vietnam with him and help close that chapter of his life. As she notices a Vietnamese farmer staring at her father Kathleen asks if the old man is mad at her father. “No,” replies O’Brien, “All that’s finished” (188).

For O’Brien it seems as though he needs the female characters to make the connection between love and war and life and death. It is not always a successful link. His fellow soldier Norman Bowker had carried a picture of his girlfriend with him during his days and Vietnam but she had married. He saw her on his return, but while he could not bring himself to approach her and talk, he also could not pull himself from the memory and went past her house time and time (146). He later committed suicide.

Women seemed to occupy the same space and provide the same ironic and contradictory thoughts as Vietnam itself. They were vital to the combat soldiers, but not present with them, or present as a mysterious Mary Ann. They could give a soldier a reason to stay alive or a reason to care less about living. They could be a distraction to take a soldier’s mind off of the war or a distraction which could contribute to the horror of war. Like Martha they could be loved and hated at the same time. Like combat itself the women in the soldiers’ thoughts were both intensely private and yet communal.

Love and War in Tim O’Brien’s The Things They Carried. (2017, Mar 16). Retrieved from https://studymoose.com/love-and-war-in-tim-obriens-the-things-they-carried-essay 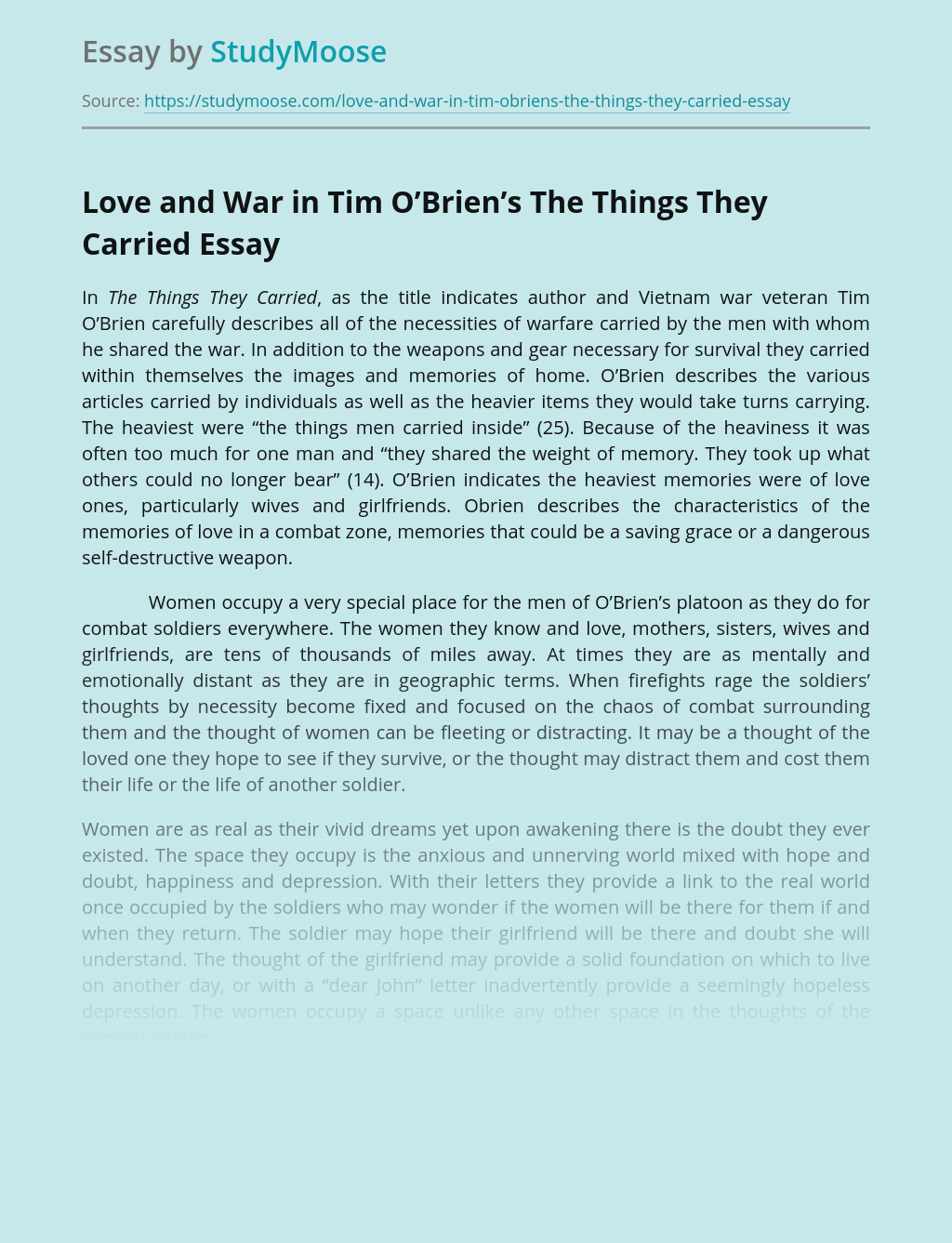 Turn in your highest-quality paper
Get a qualified writer to help you with
“ Love and War in Tim O’Brien’s The Things They Carried ”
Get high-quality paper
Helping students since 2015
Stay Safe, Stay Original