“The Things They Carried” by Tim O’Brian

“One can never truly know oneself because each new experience adds to an individual’s identity, no matter how grand or minute the experience.” Identity is the physical and mental properties of and individual including their culture or traditions. Everyone has their own identity which allows us to be different. It is the value and norms that describes ones-self. In the story, “The Things They Carried” by Tim O’Brian, identity plays a big role in each characters life. As readers, we are introduced to a group of young soldiers that are currently in the war.

Don't use plagiarized sources. Get your custom essay on
“ “The Things They Carried” by Tim O’Brian ”
Get custom paper
NEW! smart matching with writer

Each soldier carries several valuable artifacts which symbolizes content within their lives. These artifacts vary from food to drugs and even weapons. Although each solder is involved with an extremely difficult circumstance, the materials give them a little piece of happiness and strive them to continue on their journey. In the first chapter of “The Things They Carried”, the plot revolves around a man by the name of Lieutenant Jimmy Cross, a young soldier who is infatuated by a girl named Martha.

Throughout the novel, Cross identity shifts from being infatuated to becoming a leader. Martha has an extremely powerful impact on Cross. She writes letters which never mentions the war or her love for him. Cross takes pride in this and allows himself to become distracted by the thoughts of her. An example of this occurs when he “wonder[s] if Martha was a virgin” (2). Cross was distracted by the thought of Martha; he did not seem to realize that the more he thought of her, the less aware he was of his fellow soldiers.

Cross is even willing to go to an extreme degree in order to feel close to her with Martha occurs with the envelope. “He would sometimes taste the envelope flaps, knowing her tongue had been there” (1). He’d do anything just to feel close to her, which was much more than love. Cross is allowing himself to be taken over by the thought of a woman and leave his men behind. The turning point in his identity occurs with the death of Ted Lavender, a fellow soldier.

Lavender makes a brief but important appearance in the story. His death has a huge affect on Cross, in which he begins to blame himself. “He pictured Martha’s smooth young face, thinking he loved her more than anything, more than his men, and now Ted Lavender was dead because he loved her so much and could not stop thinking about her”. Cross feels as if he has full responsibility of Lavenders death because he allowed himself to be deluded by Martha. Guilt overcame Cross, and he realized that he had let his soldiers down. “He felt shame, He heated himself. He had loved Martha more than his men, and as a consequence Lavender was now dead, and this was something he would carry like a stone in his stomach for the rest of the war” (6). Cross feels shameful for not taking responsibility and completing his job. Based on everything that occurred, it allowed him to gain recognition and find the strength to lead.

As a result of Lavenders death, Cross has an epiphany. He gained recognition of his wrongdoings and began to turn his life around. In order to move on Cross had to get rid of anything that involved Martha, which led to burning all the letters. “Cross crouched at the bottom of his foxhole and burned Martha’s letters. Then he burned the two photographs” (23). At one point he treasured these items, once he burned them it symbolized recognition and forgetting about Martha as a whole. Cross reminded himself that his obligation was not to be loved but to lead. “He would not tolerate laxity. He would show strength distancing himself” (5). Cross is now a leader and no longer distracted. He follows the rules and regulations which made up for his mistakes, even though it was a tad bit late.

His identity shifts when he realizes his mistakes. Overall Lieutenant Jimmy Cross identity shifts from being infatuated to becoming a leader. In the beginning of the novel, he was extremely obsessed with Martha and distracted by the thought of her which made him unable to complete his job. It took the death of Ted Lavender for him to realized his actions. Once he realized this he changed for the better and took on the role of being a leader. Cross put his men first and became less distracted by his love life. Although Martha had a huge impact on the daily life of Cross. Fortunately without her, he would have never learned a valuable lesson about life which is to never lose sight of what’s really important.

“The Things They Carried” by Tim O’Brian. (2016, May 01). Retrieved from https://studymoose.com/re-the-things-they-carried-by-tim-obrian-essay 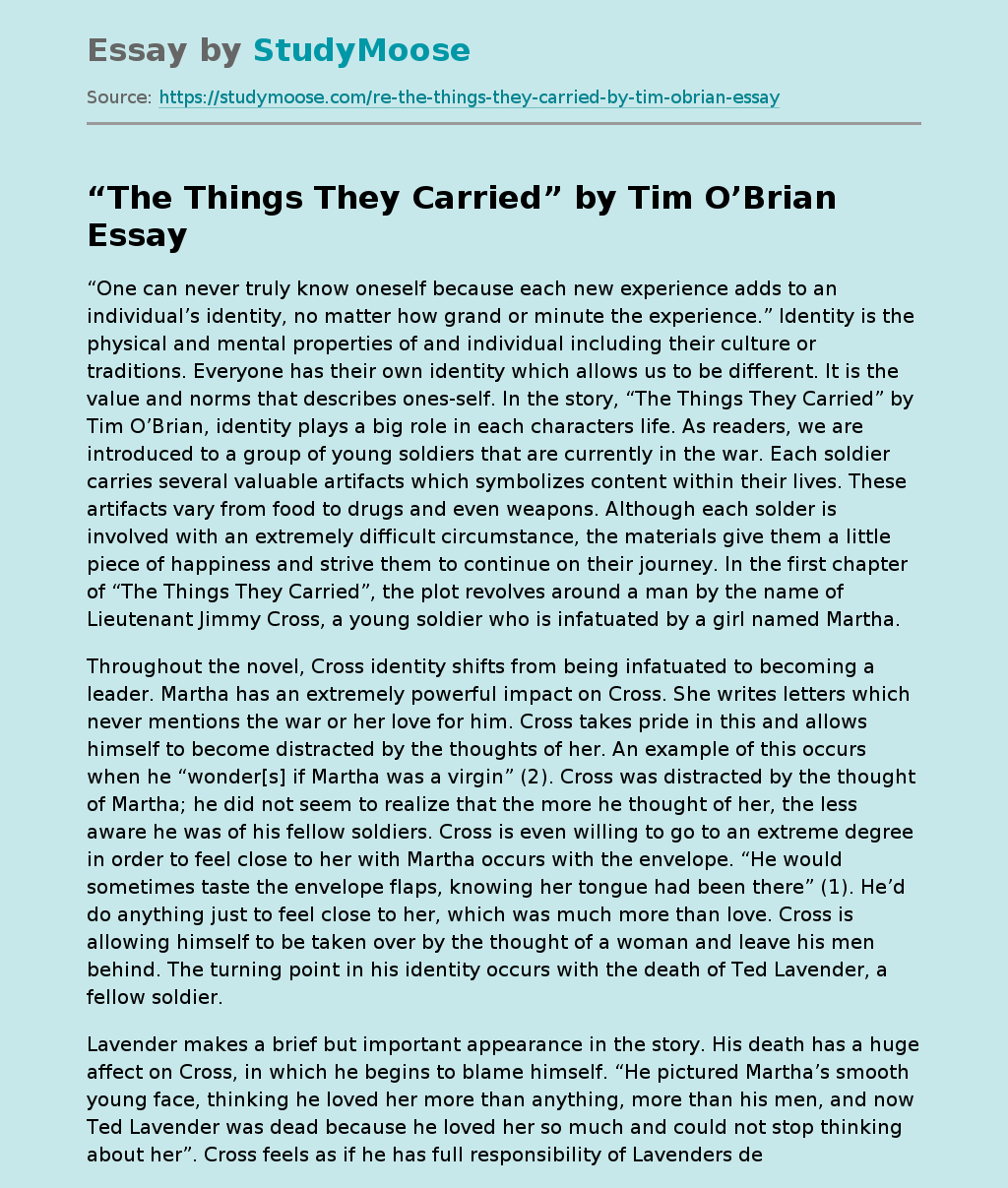