“Story Truth” and “Happening Truth” in the Things They Carried

It is not easy to distinguish “happening truth” from “story truth”, and at times during the novel O’brien reveals which is which.

Don't use plagiarized sources. Get your custom essay on
“ “Story Truth” and “Happening Truth” in the Things They Carried ”
Get custom paper
NEW! smart matching with writer

A few chapters of the book stand out more than others when it comes to this concept of truth that Tim O’Brien tinkers with. These chapters include “Love”, “How to Tell a True War Story”, “The Man I Killed”, and “Good Form”. “Love” is the second chapter of The Things They Carried, but it is the first chapter that the author Tim O’Brien begins to, in a way, harass the reader with this concept of “happening truth” and “story truth”.

Tim O’brien and Jimmy Cross sit, talk, drink, smoke and reminisce about their times in the Vietnam War.

At times Tim O’brien chimes in and begins to narrate, for example, “At one point, I remember, we paused over a snapshot of Ted Lavender, and after a while Jimmy rubbed his eyes and said he’d never forgiven himself for Lavender’s death” (27). At other times there is dialogue between O’brien and Cross such as, “’Remember this? ’ he said. I nodded and told him I was surprised. I thought he’d burned it…’Well, I did—I burned it. After Lavender died, I couldn’t…This is a new one. Martha gave it to me herself’” (28). This makes the reader believe that the Tim.

O’brien who wrote the book is indeed the Tim O’brien that is in the book, therefore this must be a true story from his experiences in the Vietnam War. All the more, at the end of the chapter he even asks Jimmy Cross permission to write the book the reader is looking at right then and there, “At the end, though, as we were walking out to his car, I told him that I’d like to write a story about some of this…’Why not? ’ he said…’Make me out to be a good guy, okay? Brave and handsome, all that stuff. Best platoon leader ever’” (29-30).

Like stated before, it is nearly impossible for a blind reader to distinguish the “happening truth” from “story truth”, but it is possible that Tim O’brien and Jimmy Cross did in fact meet and talk for a day, but the honest facts may be twisted by “story truth”. For example, O’Brien may not remember his and Jimmy Cross’ conversation throughout that entire day in great detail; therefore he may have had to formulate and make up certain parts in order to fill in holes and perhaps make the interaction more interesting. The first three words of the chapter “How to Tell a True War Story” are, “This is true” (67).

Although Tim O’Brien begins this chapter with such a bold and clear statement, throughout the chapter he has the reader thinking and confused when he contradicts himself by stating things such as, “In many cases a true war story cannot be believed. If you believe it, be skeptical. It’s a question of credibility…In other cases you can’t even tell a true war story. Sometimes it’s just beyond telling” (71), and “In war you lose your sense of definite, hence your sense of truth itself, therefore it’s safe to say that in a true war story nothing is ever absolutely true” (82).

These remarks by Tim O’Brien are all about what “happening truth” and “story truth” are all about. In war it is impossible to know and remember the definite “happening truth”, therefore while telling a war story that may be totally true; one must fill in blanks with “story truth” for those listening not to get lost. In the chapter “The Man I Killed”, Tim O’Brien takes the whole playing with truth idea to a new level, and you are not able to realize until later in the novel. In this chapter O’Brien describes, quite literally as the chapter is titled, the man he killed. He goes through everything in such

detail and paints such a clear picture in the reader’s head to imagine. He describes in detail how the body was, “His jaw was in his throat, his upper lip and teeth were gone, his one eye was shut, his other eye was a star-shaped hole, his eyebrows were thin and arched like a woman’s, his nose was undamaged, there was a slight tear at the lobe of one ear, his clean black hair was swept upward into a cowlick at the rear of the skull, his fingernails were clean…” (124). He recalls dialogue between his fellow platoon members about the man he killed, “’Oh, man, you fuckin’ trashed the fucker,’ Azar said.

‘You scrambled his sorry self, look at that, you did, you laid him out like Shredded fuckin’ Wheat. ’ ‘Go away,’ Kiowa said. ‘I’m just saying the truth. Like oatmeal. ’ ‘Go,’ Kiowa said. ‘Okay, then, I take it back,’ Azar said…” (125). O’Brien even writes about his thoughts of the young Vietnamese man’s life before he killed him, such as if he was married, if he had children, if he was educated, what his job was before the military, etc. Six chapters later in “Good Form” Tim O’Brien comes out with the total honest truth, the real truth, for the first time in the book.

He says, “It’s time to be blunt…a long time ago I walked through Quang Ngai Province as a foot soldier. Almot everything else is invented” (179). Tim O’Brien lied about the entire chapter “The Man I Killed” other than the small fact that he was there. He did not throw any grenade, none of the dialogue between his fellow platoon mates happened, he experienced none of the feelings he described, and he certainly did not kill any man. Why would Tim O’Brien do this? Why would he write entire chapter based on lie? Why would he mislead the reader like this? Tim O’Brien explains, “I want you to feel what I felt.

I want you to know why story-truth is truer than happening-truth. Here is the happening-truth. I was once a soldier. There were many bodies, real bodies with real faces, but I was young then and I was afraid to look…Here is the story-truth. He was slim, dead, almost dainty young man of about twenty. He lay in the center of a red clay trail near the village of My Khe. His jaw was in his throat. His one eye was shut; the other eye was a star shaped hole. I killed him” (180). Tim O’Brien wants to get his point across in this novel. Like he stated before, he wants the reader to feel what he felt, he wants the reader to feel it in their stomach.

Tim O’Brien puts these scenarios on display in this novel The Things They Carried and even he expresses his love for “story truth” in his own story telling, and that it is indeed truer than “happening truth”. Works Cited O’Brien, Tim. The Things They Carried: a Work of Fiction. New York: Broadway, 1998. Print.

“Story Truth” and “Happening Truth” in the Things They Carried. (2016, Dec 08). Retrieved from https://studymoose.com/story-truth-and-happening-truth-in-the-things-they-carried-essay 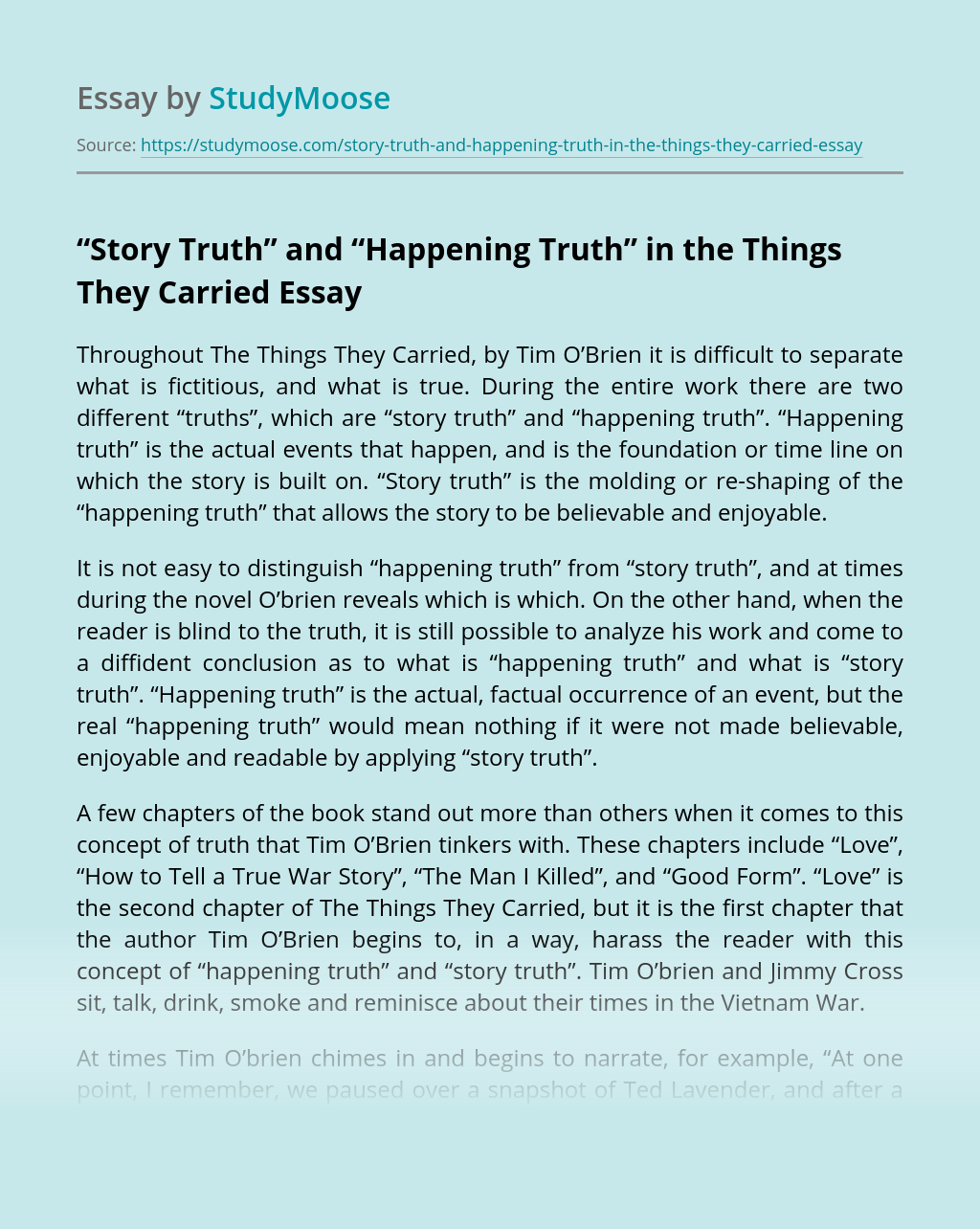