The Truth and Reality The novel that I am currently reading at the moment is The Things They Carried. It is a fictional story with fictional characters. It’s very realistic and easy to relate to without any prior war experience. Tim O’Brien is the main character in the book. In the book he talks about his fellow soldiers, friends, and past war days. These stories about the war are very detailed which paints a clear picture of how O’Brien remembers the war.

Don't use plagiarized sources.
Get Your Custom Essay on Truth vs reality Just from $13,9/Page

The stories are so clear and detailed that I find it somewhat hard to believe. O’Brien describes these crazy war stories that I personally find over exaggerated.

I feel that if O’Brien tells the story like this that people may actually find the stories more believable. It’s a game of truth versus reality. The novel is fiction, but O’Brien does a great job of giving it a sense of reality. O’Brien tells in depth stories sometimes emotional to give his novel a feeling of reality.

Even though this book may be fictional it does a good job of portraying the characters and stories as real as possible. In the chapter “Enemies”, Dave Jensen and Lee Strunk get into a fist fight over a pocket knife that Jensen thinks Strunk has stolen. As a result of the fight Jensen ends up breaking Strunks nose.

Jensen feared that Strunk will retaliate and go after him. Jensen decides to break his own nose and settle the score to avoid future problems. In the following chapter “Friends”, Jensen and Strunk learn to become friends and learn to trust each other. They became closer and decided that if either were to get severely injured that the other would kill him to take him out of his misery. Well Strunk ended up getting his leg blown off and was begging Jensen not to kill him. Even though they made an agreement Jensen couldn’t kill him. Strunk was placed into a rescue chopper and was on his way to seek medical attention.

During the flight Strunk died unfortunately. Jensen is relieved about this because he doesn’t have to kill a fellow friend, or see him in misery. Even with this story being fictional, that moment that Jensen had to face is such a serious moment. Just the thought of doing something you really don’t want to is issues that humans face all the time. I think Jensen experienced trauma, and even though they wasn’t friends at first he still encountered the feeling of losing a loved one. The amount of detail about Jensen and Strunk fighting and then becoming friends does a great job of making it seem believable.

Jimmy Cross is the lieutenant and leader. He wasn’t special in anyway and had problems just like everyone else. His problems were: responsibility of the soldiers, and his uncontrollable love for Martha. Cross’s main problem was that he was letting Martha become a huge distraction for him. He was one of the soldiers who let their emotions and inner feelings get in the way of his job. One day Cross gets distracted by his fantasy of Martha. He supposed to be watching after the soldiers, but instead he’s fantasizing about if Martha is a virgin or not. Cross distracting himself resulted in Ted Lavender and Kiowa to be killed.

The sad part is that the thought of Martha is what distracted Cross, and she doesn’t even feel the same way about him. So now Cross has guilt and grief on his shoulders because of the lost soldiers. A way of dealing with the murders for him is to become a better leader. He wants to lead his troop better with confidence and no distractions. There are problems that Cross deals with are very real issues. These issues happen to people in everyday lifestyles. His problems seem to go against each other instead of helping. He holds himself responsible for the soldiers, and wants to do a good job at work.

However he fantasizes about Martha at work which gets him distracted resulting in two soldiers killed. It’s hard to say what Cross really wants, but from the looks of it seems like he really wants love. Maybe from being a soldier so long and living a crazy lifestyle I think that Cross just wants Martha’s love more than he wants to fight in the war. To sum things up a bit, I’m going to describe the differences between reality and truth. Well at least describe the differences between the two presented in the book. There is a clear difference between truth within a story and reality.

This may sound complicated so please try to follow what I am saying. What we think truth is within a story may not even be true at all. It’s more to make the story sound more believable, and enjoyable to read. Reality would be parts of the novel that we would consider factual. An easy example would be that there really was a Vietnam War. Another would be that the author Tim O’Brien really did serve in the war. I haven’t done much research beyond those examples to go into further detail. My whole point is that O’Brien took reality which are real actual events and applied his story version of truth to it.

I call it story truth because O’Brien gives it a feeling of reality. The whole point is to make the novel well rounded and sound believable. Without him applying this to the novel could make the characters seem less lively. It could also affect the plot and sceneries that O’Brien wants to the reader to imagine. This could be anything in the novel that’s explained in great detail. The incident with Jensen and Strunk is most likely story truth. Odds are that Jensen and Strunk never existed in real life. They’re most likely fictional characters but the way O’Brien describes them and their incident gives it such a real feeling.

It also adds some excitement to the novel. I think that author O’Brien does this with all the characters to give the characters and their individual stories a real and believable feeling. I don’t think that all the stories or characters are totally made up. I just think that O’Brien adds or changes certain parts of the story for the better. To me it’s easy to see that O’Brien tells in depth stories sometimes emotional to give his novel a feeling of reality. He does a really good job at it because after reading the book I wouldn’t think that it was a fictional book. 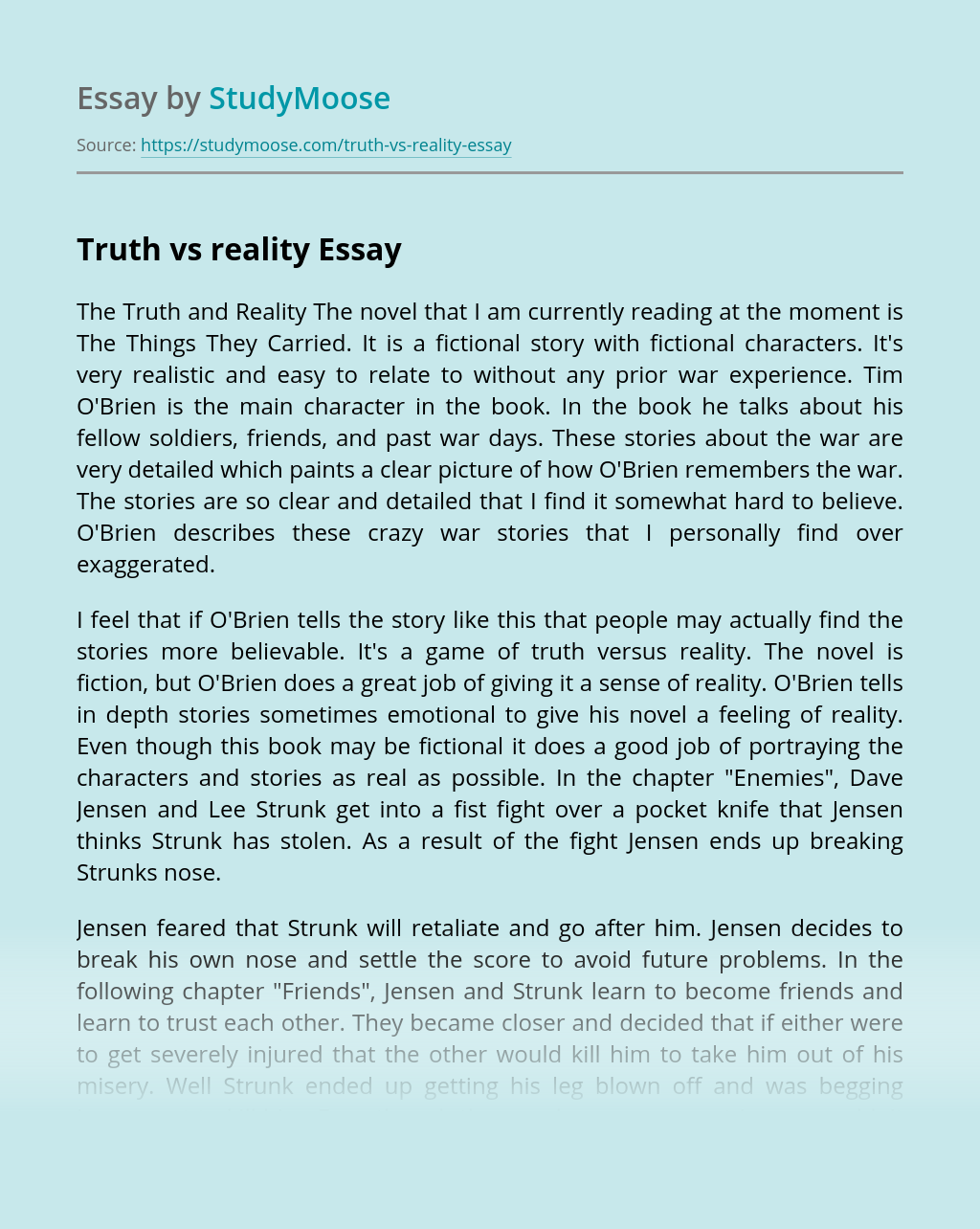 How Tourism Promote Culture of Peace

“I have watched the cultures of all lands blow around my house and other winds have blown the seeds of peace, for travel is the language of peace.” .. . Mahatma Gandhi Does tourism promote culture of peace? The tourism has become the important industry in the developing countries for the economic development. Tourism appears... VIEW ESSAY

There are 2 types of database backends available when implementing a Facebook-Lite application, which is the Oracle implementation using a relational database model (SQL), and the MongoDB implementation (NoSQL). First and foremost, it is about the query performance. We will talk about the time comparison. It is found that MongoDB took a shorter time to... VIEW ESSAY

In the Great Gatsby, social standings are always on the minds of the East and West Eggers. Either thinking about their wealth, appearances, or where they really stand in the social ladder, they are constantly thinking about themselves; and while some despise each other for what they are, others only dream about being them-people like... VIEW ESSAY

From the case study of The Financial Detective, 2005 the objective is to place the correct company to match the given financial data and ratios. I will analyze and compare the financial ratios of the companies in each industry and interpret them to identify the correct company. Health Products: Company A is Johnson and Johnson... VIEW ESSAY

View sample
Our Responsibility in Our Life

Since childhood, we have been taught about responsibility. Until there comes a time that we all have responsibilities that we must own up to. But, what we already have a sense of responsibility for all the things we have done? The answer is may be yes or may be no. So, what is the meaning... VIEW ESSAY