The Things They Carried by Tim O’Brien

“The Things They Carried” was written by Tim O’Brien. Tim was born on October 1st, 1946 in Austin, Minnesota. He earned a degree in political science at Macalester College in 1968 then was drafted in to the military. From 1968 to 1970 he served as a foot soldier in the Vietnam War. O’Brien was awarded a purple heart; following discharge he attended Harvard University although he left in 1976 without completing the Ph. D program. Tim stabilized his publishing career and started focusing on writing.

Don't use plagiarized sources. Get your custom essay on
“ The Things They Carried by Tim O’Brien ”
Get custom paper
NEW! smart matching with writer

Tim O’Brien wrote “If I Die in Combat Zone, Box Me up and Ship Me Home” which was a popular critical success.

He earned a foothold in American Literature and received the 1979 National Book Award in Fiction for “Going after Cacciato”. O’Brien has eight works published and six of them were novels. In O’Brien’s works he is noted for branching out in themes like: family conflicts, betrayal, loss of faith, and social principles. Tim was labeled as a meta-fictional writer using illusion and fantasy to express troubling nature of reality (“Tim O’Brien”).

A platoon of seventeen soldiers from America travel in booby-trap swamps and through the hills of Vietnam.

They been ordered to set ambushes, execute night patrols, and search out and destroy the massive tunnel complexes south of Chu Lai constructed by Viet Cong guerrillas” (McCarthy). On their voyage the men carry something with them; the things they carry have a meaning to each soldier which distinguishes them. The men are not completely prepared to deal with the stresses of war emotionally.

The story circles around Lieutenant Jimmy Cross and the burden he feels for the death of Lavender, one of his soldiers. “The Things They Carried” reflects on each soldier and their way of trying to escape from the war.

The themes throughout the narrative have a lot to do with what each character carries, for example Lieutenant Jimmy Cross carries the burdens of leadership and love. Tim engages official language used by soldiers that are used to almost disguise the actuality of what has happened; an example would be “one casualty” instead of stating someone was shot and killed. It used to be a softer way of acknowledged someone has deceased.

The Things They Carried” was seen as a text that: In prose that combines the sharp, unsentimental rhythms of Hemingway with gentler more lyrical descriptions, O’Brien gives the reader a shockingly visceral sense of what it felt like to tramp through a booby-trapped jungle. Further praises to O’Brien for his ambition in attempting to convey the horror of war and the power if storytelling (Smith). O’Brien uses the combination of story and experience involving the author, characters, and the reader in a complex relationship questioning the truth of how realistic the story feels to how realistic the story actually is.

O’Brien takes license to mingle fact and fiction and exploits conflicting codes of violence to get desperate ‘truths’ about Vietnam which involve the depiction of process rather than action” (Smith). Overall the style O’Brien has developed is intriguing and mind-bobbling and if you don’t read this book because of your lack of interest in the Vietnam War then read it for the craft of his writing. Tim O’Brien inhabits his characters to help him express his feelings on war through perspectives of different diversities of characters. The main character is the Lieutenant Jimmy Cross; he is the leader of seventeen men of one Platoon.

They are referred to as the Alpha Company. This story contains information on each character from the third person narrative. The narrator conveys the soldiers’ world, and they dwells on the soldier’ imagination, the narrator carries burdens of the men’s stories and indirectly asks the readers to take them up as well (Piedmont-Marton). O’Brien describes the men as “grunts” because it’s what they are, and that’s because of the ammunition, rations, water, guns and flares that they carry. Lt. Jimmy Cross doesn’t carry the heavier objects but instead is weighed down by the responsibility for the lives of his men.

Ted Lavender was killed by being shot in his head walking back from going pee; Ted was known for having the tranquilizers and marijuana, but he also carried an infinitely heavy burden- fear. The soldiers are what they carried and this platoon of men depends on one another to share the burden. “They are also defined as men, differentiated from the group because of the things they carry, the objects the comfort them individually may also alienate them from one another” (Piedmont-Marton). Two examples of this would be Rat Kiley, the medic, carrying M&M’s as a comfort and to take his patients mind off their pain for a moment.

Since Ted carried fear he always kept marijuana with him as well, his dependence upon drugs makes his fear visible and the distances him from the others. Lt. Jimmy Cross is alienated and comes to realize that you could die from carelessness and gross stupidity and that he is responsible for the others. Jimmy chooses between Martha, the girl he thinks he is in love with, and his duty; he chose his duty and burned the photos and letters he carried from Martha. By Lt. Cross doing this he put aside an unnecessary burden. Tim O’Brien portrayed the perspective of a soldier in the Vietnam War in a relatable, realistic way.

The story goes into detail explaining how things were done, like the men would draw lots to see who will wire a Viet Cong tunnel with explosives. Having a man just walking back from peeing being shot and killed is completely unexpected and gruesome but it’s a reality that comes with war. Men in war use what they can to escape the reality of what going on around them, they carry things with them as a way to comfort or distract themselves. Fear is one thing most men will experience in combat and throughout the story is shows how they are capable to continue their march, putting themselves at risk just to carry out their orders.

The Things They Carried by Tim O’Brien. (2016, Sep 21). Retrieved from http://studymoose.com/tim-obrien-essay 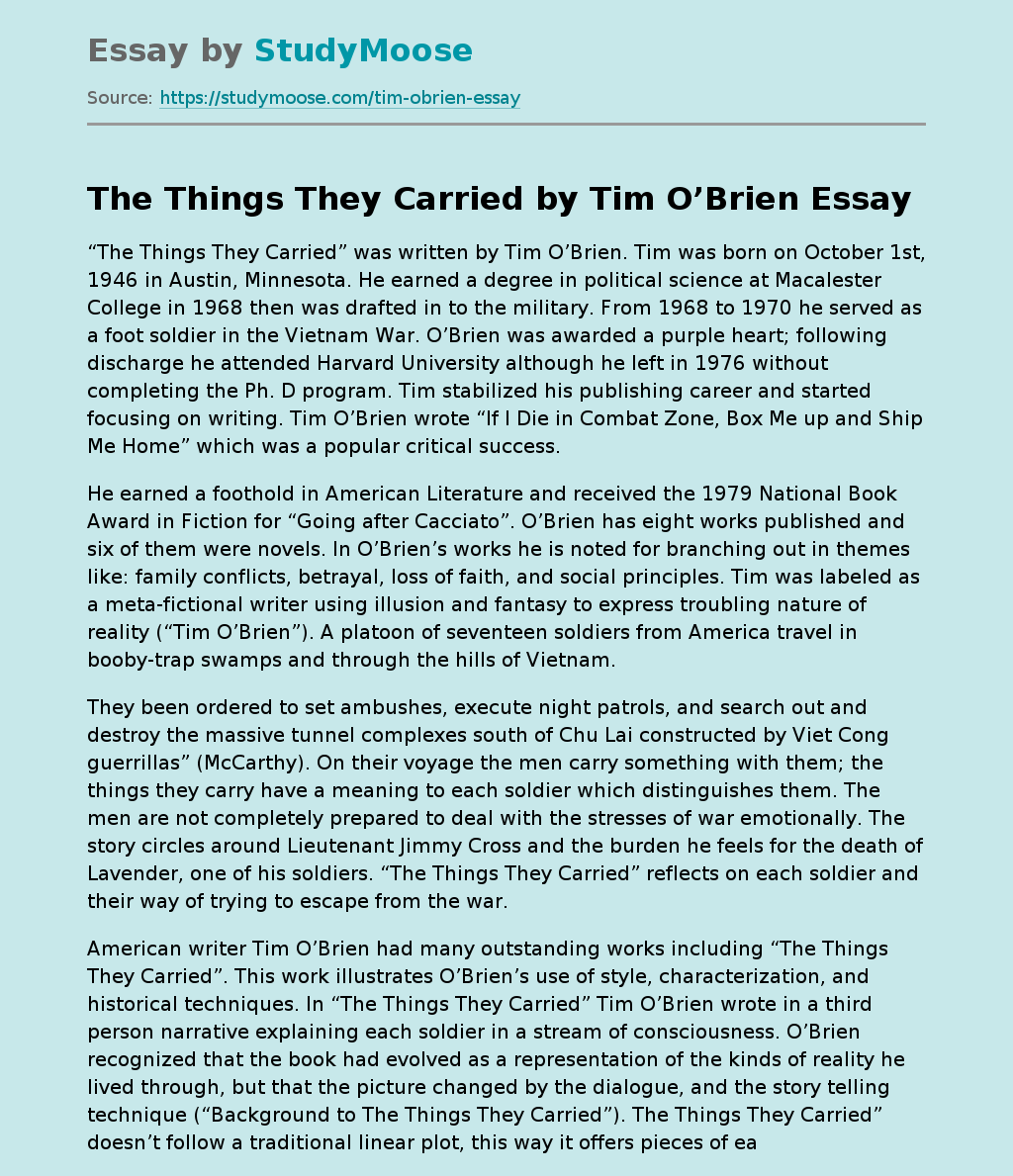